so i just purchased a c60 mapei disc to build up, need to get a set of wheels built. i am looking at the farsports with dt 180's and just wondering if the 28mm wide rims will fit. id appreciate advice from anyone with any experience or knowledge with fitting wheels to the c60
thank you in advance
Top

What size tires are you wanting to run on these 28mm wide rims?

I have a late C59 which I believe has the same clearance as a C60. The biggest problem is the height of tall tires, in particular on the front fork. A 25mm GP4000 is the absolute limit on my bike because of the height of the tire. It works but I'd prefer another mm or two of clearance. There's much more room side to side.

havent decised tire size yet, i figured id slap on a set of 23's that i have laying around and see how the work on the wider rim, i assume the wider rim should widden and shorten the tires ever so slightly
Top

Couple of things:
- it’s the internal width that is the critical measurement when talking clinchers. Up to a point, a wider internal rim width will both increase effective tire width AND height. If you go from an internal width of say 17mm to 19mm that effectively increases the tire’s cross sectional circumference a minimum of 2mm from what it was on the 17mm rim. You have to go really wide before the height will actually start decreasing, and at that point the rim is probably too wide for the tire anyway.

- re the C60 vs C59 rim brake versions (so kind of irrelevant here)... but just to clarify... the very last runs of C59’s had a modified fork with a bit more clearance which matched the first fork of the C60 which replaced it. Still not tons more clearance, but at least you could run a 25mm clincher on a little wider rim. However, the rear end of the C59 was never changed so it then became the limiting factor for tire clearance. For instance, a 25mm Conti 4000Sii on a Shamal Ultra (17mm internal) was a little too tight for the rear end of the last, or any C59, even though it would now fit the fork. 25mm tubulars are fine however. The C60 had added clearance at both ends.

- But, you’re asking about the C60 disc. That’s where I just don’t know for sure, but while rim brakes won’t be a limiting factor, you may have clearance issues issues on the inside of the chainstays. But I’m not sure if it’s got any more clearance there than the rim brake version. I suspect you’re going to find out the max tire size to be limited when compared to what some people run. Still, it’s not a frame that I think you’d want to be running 30mm clinchers on anyway. I think with that wide a rim, it’s going to have at least a 19mm internal width, so I think your tire selection of fittable tires is going to be limited. Would be good if you could report back with some results as I’m curious too.
Colnago C64 - The Naked Build; Colnago C60 - PR99; Trek Koppenberg - Where Emonda and Domane Meet;
Unlinked Builds (searchable): Colnago C59 - 5 Years Later; Trek Emonda SL Campagnolo SR; Special Colnago EPQ
Top

For instance, a 25mm Conti 4000Sii on a Shamal Ultra (17mm internal) was a little too tight for the rear end of the last, or any C59, even though it would now fit the fork.

Yes, they would fit, and turn, but not with enough useable clearance for my lking, or my friend who owned the bike to feel good about. Can't stand "chatter" from road debris being squeezed through a too small gap between tire and bridge. The GP5000's would be a better fit for clearance for sure, but in the case of a C59 with clinchers, I think the ideal tire is probably the Specialized Turbo Cotton in the 24mm size. With clinchers these days, so much depends on the actual rim itself as to how big the ultimate dimensions go. At the time, Campy was producting the Shamal in both the 2-way fit and the normal "Clincher" version (not sure if that's still the case). Didn't want tubeless for the very reason that tires were so much tougher to fit. Went with the normal Ultras and tires/tubes were easy to mount. And no mess, no fuss, with sealant and all.
Colnago C64 - The Naked Build; Colnago C60 - PR99; Trek Koppenberg - Where Emonda and Domane Meet;
Unlinked Builds (searchable): Colnago C59 - 5 Years Later; Trek Emonda SL Campagnolo SR; Special Colnago EPQ
Top

It's working ok for me. 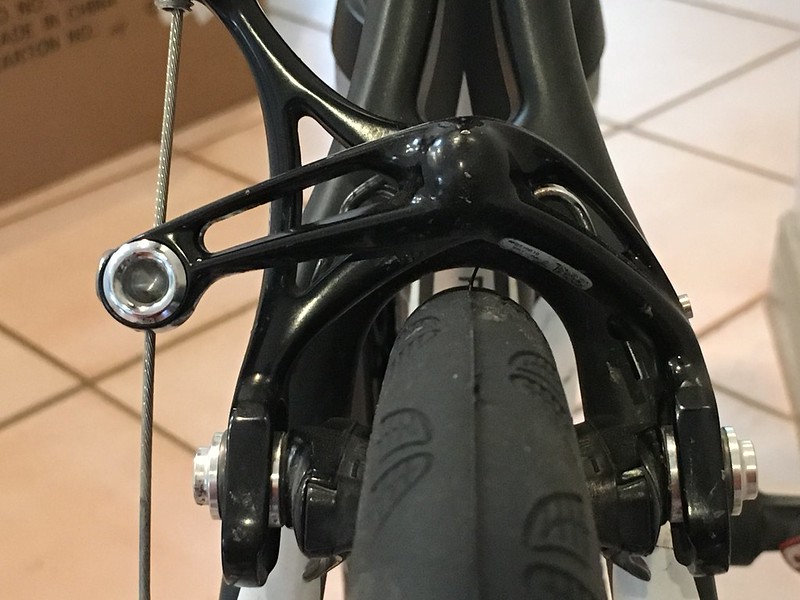 That’s certainly decent. What rims are those on? And those are 4000sii’s, 25mm? Would you say you have more, less, or about the same clearance under the fork? Also, you have the single pivot rear brake which has more of a peak in the very center, versus the dual pivots, where the Contis are highest (kind of egg shaped).
Colnago C64 - The Naked Build; Colnago C60 - PR99; Trek Koppenberg - Where Emonda and Domane Meet;
Unlinked Builds (searchable): Colnago C59 - 5 Years Later; Trek Emonda SL Campagnolo SR; Special Colnago EPQ
Top

Yes, GP4000 25mm. They are Farsports rims (25mm ext / 18mm internal). Yes, the fork is very close to the same clearance. If anything, I'd say there is slighly more clearance on the rear since the fork is so much wider than the rear brake bridge. I haven't had any issues with debris getting caught.
Colnago C59
Top

Well, I’d be fine with the clearance you’re showing there. It may be partly the dual pivot brakes being lower at the peak as well, but I’ll have to check out the clearance again with the Shamals and those tires because I don’t remember having that much clearance, so I suppose it could also be a variance in where the beads are actually sitting in the rims. Thanks for the pic. Have you tried the Specialized Turbo Cotton 26mm in there by chance. Would you mind posting a pic of your fork, not the clearance, just a side view would be great. I would like to see if it’s the same first iteration of the C60 fork that my buddy got. Sorry for veering off topic a bit.
Colnago C64 - The Naked Build; Colnago C60 - PR99; Trek Koppenberg - Where Emonda and Domane Meet;
Unlinked Builds (searchable): Colnago C59 - 5 Years Later; Trek Emonda SL Campagnolo SR; Special Colnago EPQ
Top

I haven't tried the Turbo Cotton. I've had such amazing luck with the Grand Prix line that I'm hesitant to switch to any other tire. I'm actually going to try the 25mm GP5000TL next. That should free up an extra 1mm of clearance.

Pics in the link in my signature. Close up enough? 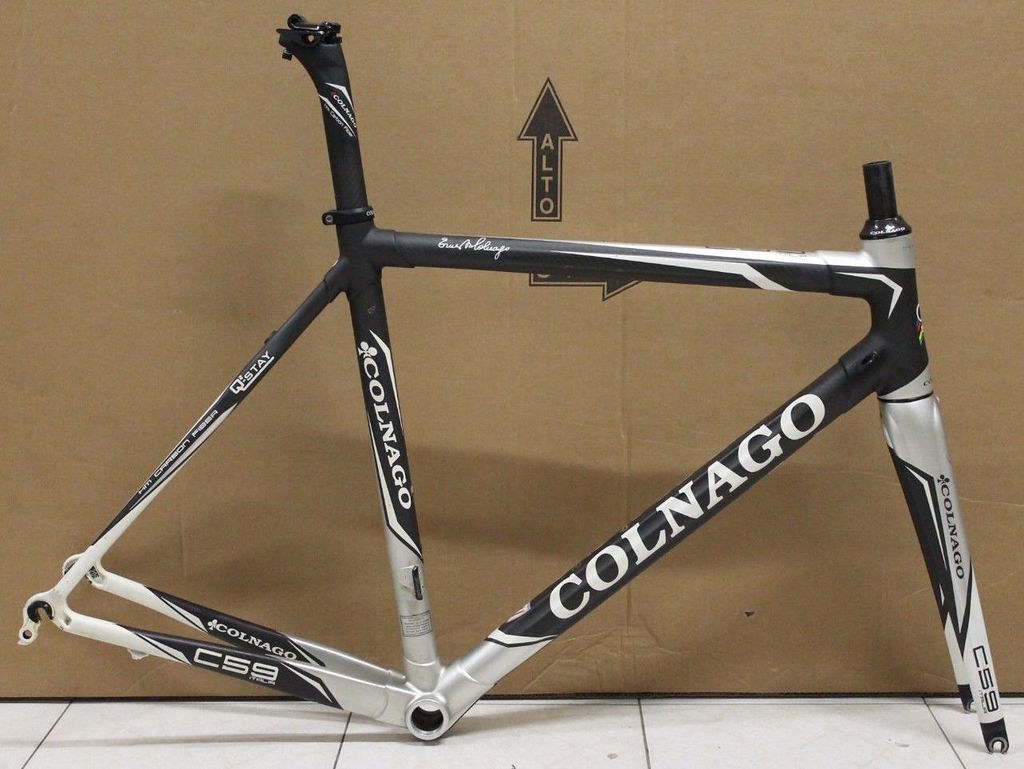 https://www.farsports.com/product/kaze-road/
these are the rims i was thinking of using
maybe my best option would be to just fit a set of wheels and measure clearance at the rim area and see what ive got
Top

According to this they are 26mm outer, 19mm inner.

They should be totally fine with 23mm tires and ok with the right, not too fat, 25mm tires.
Colnago C59
Top