ok... arguing which looks better is just for fun, because it’s totally subjective and in the eye of the beholder for sure. Having said that, to my eyes at least, discs are Fuhhgly on a road bike, with a captial F. Screams mountain bike to me. And when I’m behind them, I can’t help but see all the width and bulkiness of those barnacles (a great descriptor by the way, huge warts might be another). Not to mention you have to pretty much run a rear wheel up front now. Dished. Beefed up. More spokes. No more radial lacing. Etc.
And functionally, in a time where a few short years ago when #aerowaseverything, and the slightest unnecessary protrusion was cause for a life sentence from the aero police, it’s so funny that the non aeroness of those discs and associated calipers where before there were none became acceptable and really “not that bad”. Same as the additional weight. “not that bad”. Really, not that bad?... in a world where fractions of watt savings are considered relevant? Hmmm, seems like a disconnect somewhere. Rim brakes were always either in front of or behind the forks/stays so additional drag was pretty minimal, and always less weight, but so unprofitable going forward. But these new barnacles, of very non aero shapes, and the widended stance of the rear triangle needed to accommodate them, all of a sudden became well, ok. Ok then... carry on... I just can’t unsee the barnacles whenever I’m behind a disc braked road bike. They’re hideous. Look away.

I have to agree about the aesthetics of discs. I would prefer those rolling anchors to be attached to my boat and keep it from floating away to sea

kevinw wrote: ↑
Fri Nov 01, 2019 10:42 am
Aesthetically I actually prefer the look of discs, especially how they allow for more internal cables - just not a priority for me personally.

It can look OK on ultra-aero focussed frames, but much less so on slender-tubed lightweights IMO. It's not so much the rotors themselves as the calipers that really look like bolted-on carbuncles.. And the overbuilt front wheels with lots of cross laced spokes..

Funny that, Rim brakes hanging off forks and seat stays look more like barnacles to a lot of us

Well, that's just weird and perverse and contrary to the objective laws of aesthetics as laid down by God in the fundamental design of the universe. Like preferring 3:1 over the golden ratio, or trucker caps over casquettes.

Brake calipers on fork and seatstay bridges compliment the lines and balance of the frame. On the ends of forks or at rear dropouts on the other hand, they discordantly interrupt the narrowing of these frame elements towards their peripheral extremes, like clubbed fingers... Appropriate for Halloween I suppose..

Rim brakes are cool though
In a retro sort of way. kind of like tube tires, mechanical shifting, quick release skewers, and round frame tubes

It's why I wanted that RB Aeroad
Cyclocross, in general, is about riding the wrong bike for the conditions.
Top

Retro, current or future, cool will always be cool

.
Some things are timeless like sunsets, walks on beaches and yes, rim brakes on road bikes.... 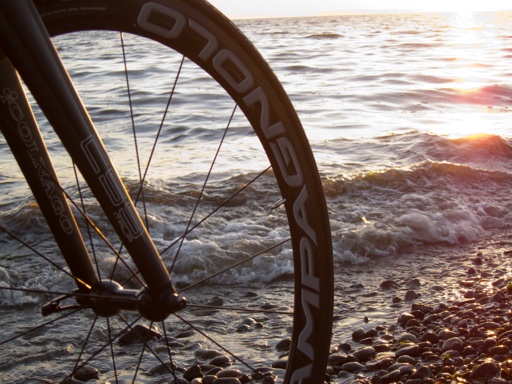 And even though I’m a Campy guy, I’m still having a tough time seeing a dished G3 wheel on the front of a road bike. I don’t know if it’s coming or going.

I’m a pretty big fan of balance, so radial lacing front and 2x rear never looked right to me. 2x front/rear looks fine, as does triplet / 2:1, or anything else as long as both wheels are laced the same way. When I was running 160/140 front/rear, that bothered me aesthetically as well. Luckily I found an excuse to stop using the 140mm rotor in the rear...it wasn’t making full pad contact. At Cascade Classic I was still running 140mm rear, had my spare wheel in the neutral support car and someone took them to use for himself. His bike was set up 160mm rear, and I’m not sure how he didn’t notice his rear braking was underpowered, probably ruined his pads too.

I don't find rim brakes ugly...they don't evoke any emotional response at all. They are what they are. I do think disc brakes look better, particularly because modern carbon rims look so clean without braketracks.
Top

I think recent strides have been made in the aesthetics department. The Dura ace and newer SRAM XR rotors look pretty neat with the whole 2-tone thing and fan swirrel going on.

I plan to keep my rim brake road bike for some time, because it may take a while (possibly never) for disc brakes to get as light.

But my next road bike is going to be an aero disc brake bike.
Top

RedbullFiXX wrote: ↑
Fri Nov 01, 2019 11:33 pm
Rim brakes are cool though
In a retro sort of way. kind of like tube tires, mechanical shifting, quick release skewers, and round frame tubes

I never thought of myself as a retro guy....that is more like the L'Eroica cool folks
https://eroica.cc/

But I do like/use all the things you listed so maybe I am retro?

Your on a roll with the Tshirt slogans

icantaffordcycling wrote:There is something special about a completely integrated hydro-electronic setup that just can't be replicated with rim brakes. Looks so darn clean.

It certainly can be, look at the Madone, Bianchi Aquila CV or a number of tri bikes. Rim brakes themselves don't make hidden cables impossible, it's a question of engineering. Hydraulic hoses require little to no engineering, just make a hole and run a line to the brakes - so that's why every manufacturer is doing/able to do it.
Top

And if your disc brakes are making noise then they arent set up/maintained properly, that is actually fact.

Sent from my SM-G977B using Tapatalk

Mine are and they "scream" on/ off. I know there's some sort of treatment available as a cure for this.
Not sure if it's a spray, but i think it is. Anyway, this "cure" is for those that want to rid this noise.
So for sure disc brakes squeek. But on occasions i hear this from rim brakes to. Just not to same degree.
Bikes: