The latest iteration of my Seven Evergreen. Started out life as a disc early adopter with a 135mm QR rear end and mechanical post mount brakes with Campagnolo. Had it rebuilt by Seven with a flat mount 142 thru axle rear to keep it current and installed 1st generation ETap.

After months of collecting and planning, I have now taken the plunge with 1x. Actually these days this is my only road bike. The high volume, low pressure tyres work beautifully on the rough Surrey Hills roads. I no longer race so the 1 x jumps are proving perfect.

I have had everything except the chainring for months and Wolftooth finally came up trumps this week when the first Flat Top rings rolled off their production line.

Other than allowing me to run 1 x because of the ratios and clutch rear mech, the new ETap AXS is not massively different in performance to the previous. Other than colour, the brakes are identical. There are some small but significant differences though. The texture on the shift paddles is nice. The rounded edges on the rotors is a marked safety improvement. XDr means no more notched freehub bodies.

All up weight is 7.9kgs which for a large metal gravel bike is pretty good, and somehow it feels lighter than the weight and rolls better than the tyres might suggest. Seven really know their stuff. 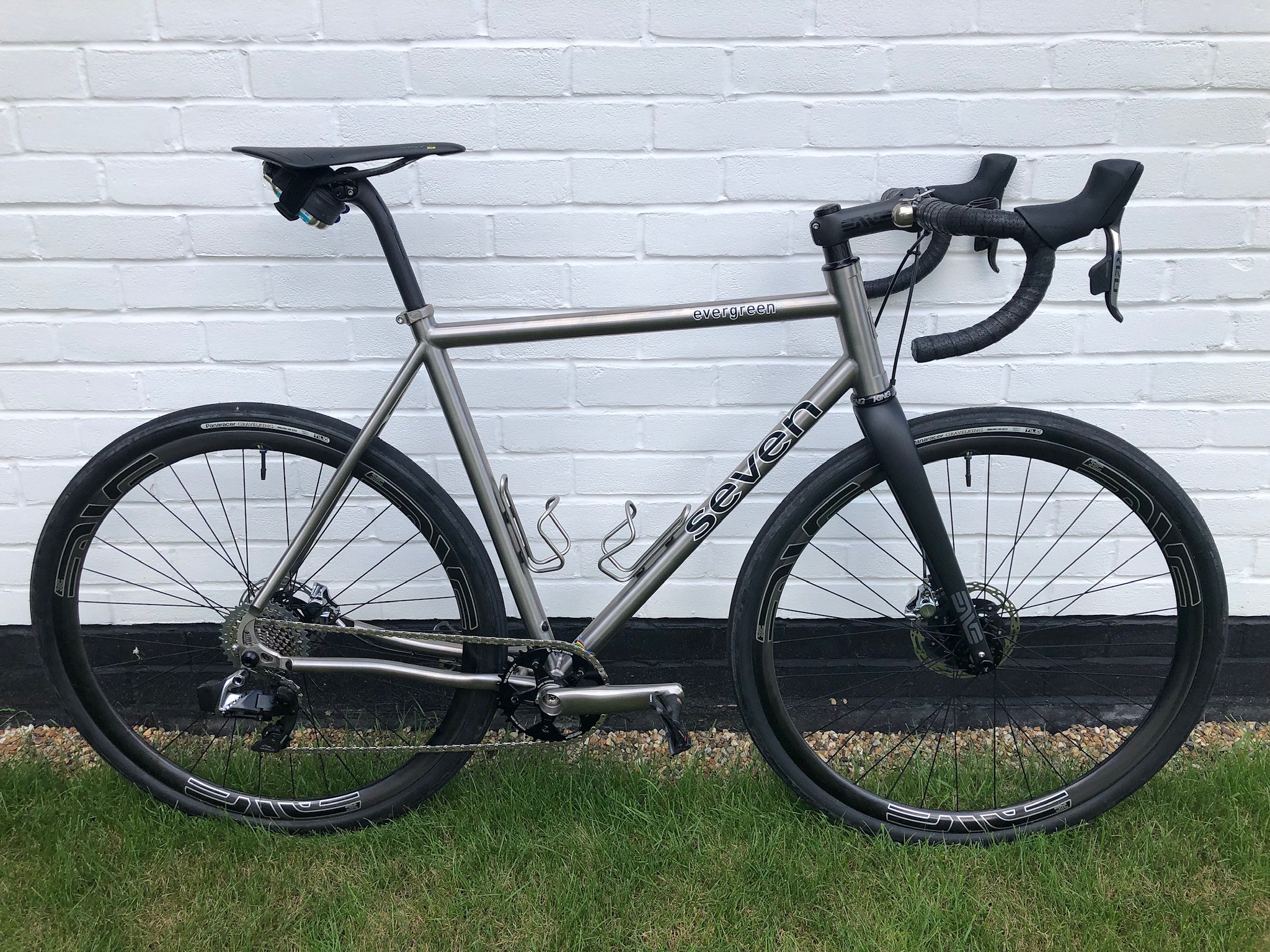 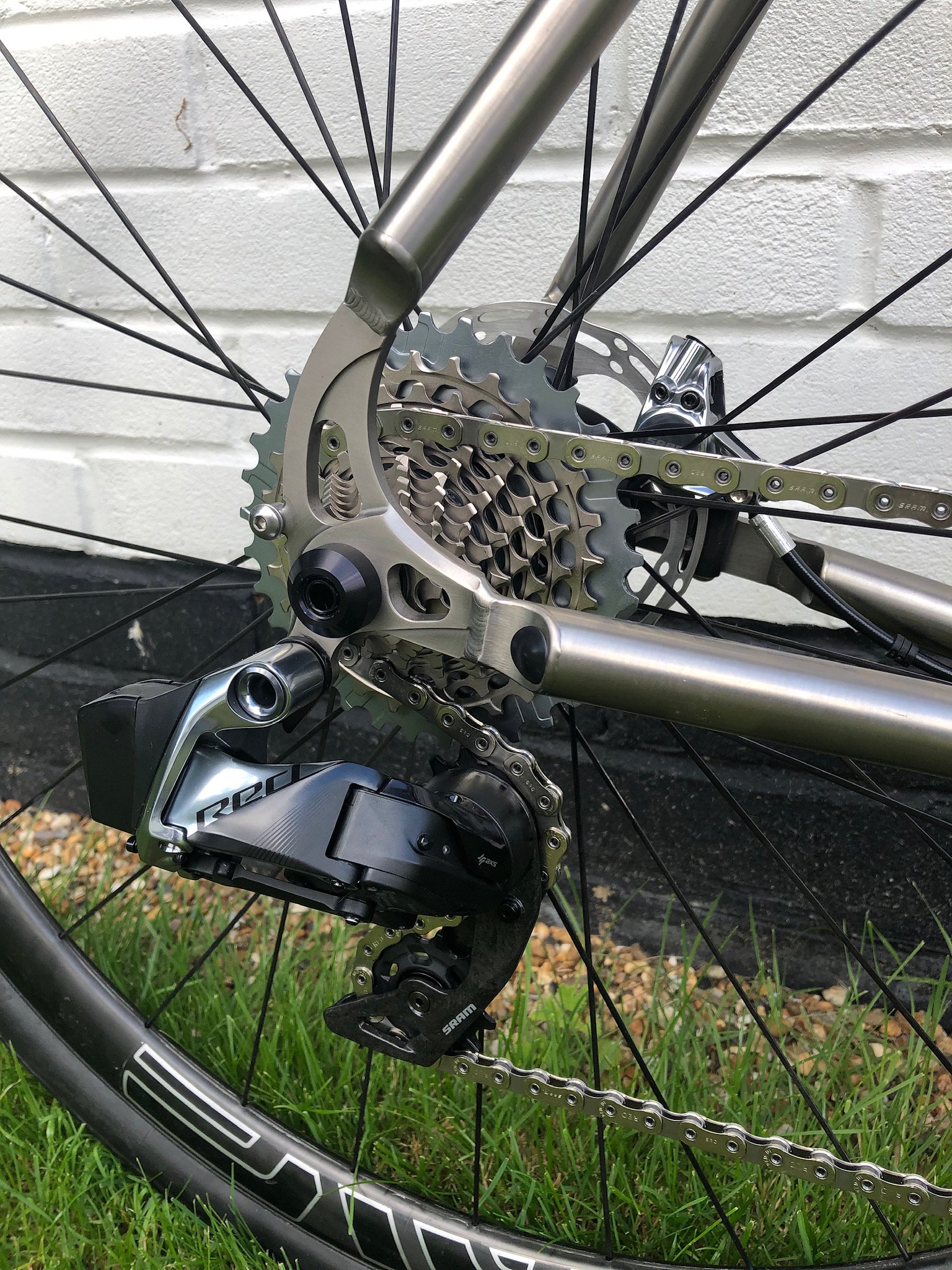 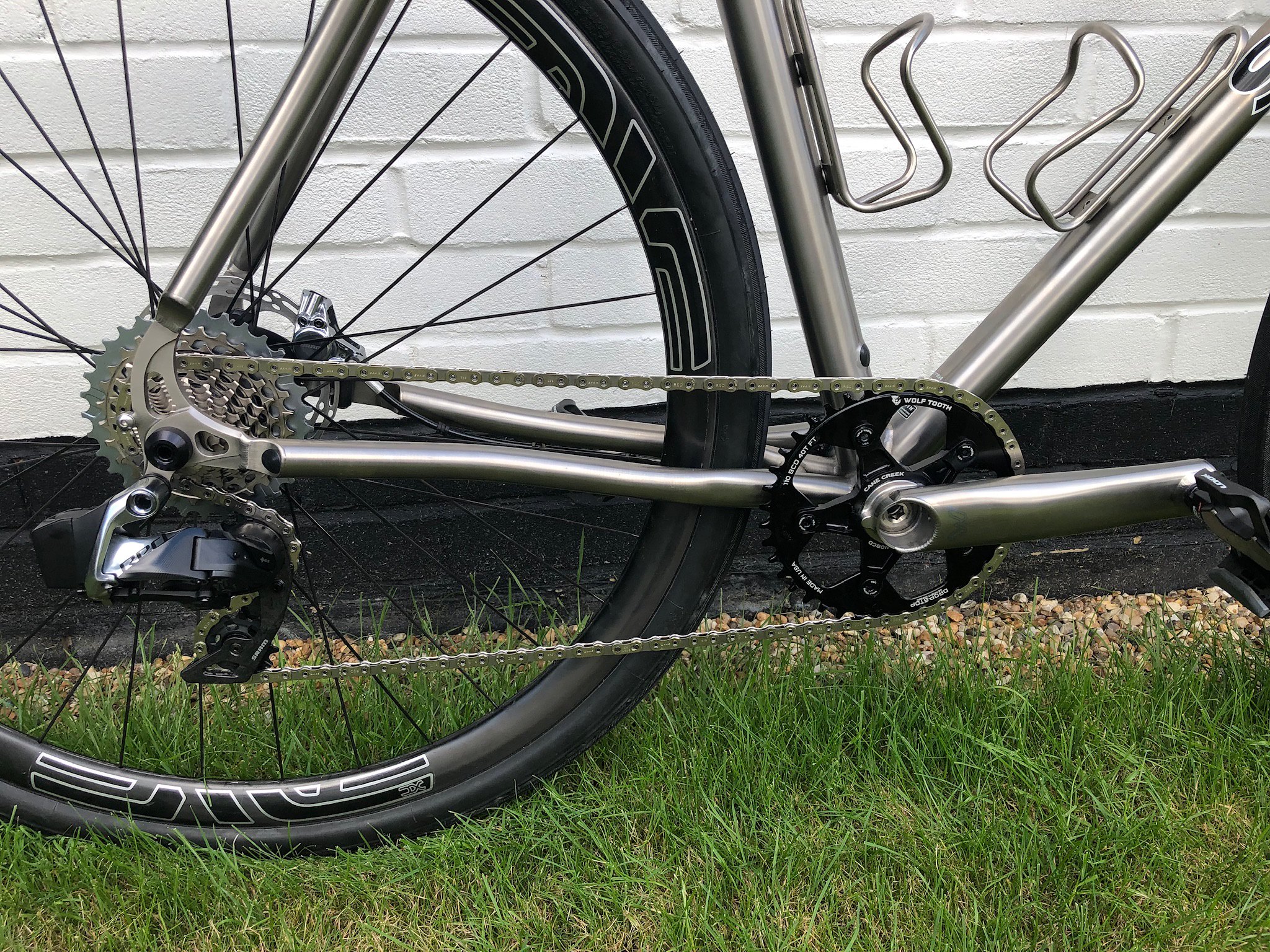 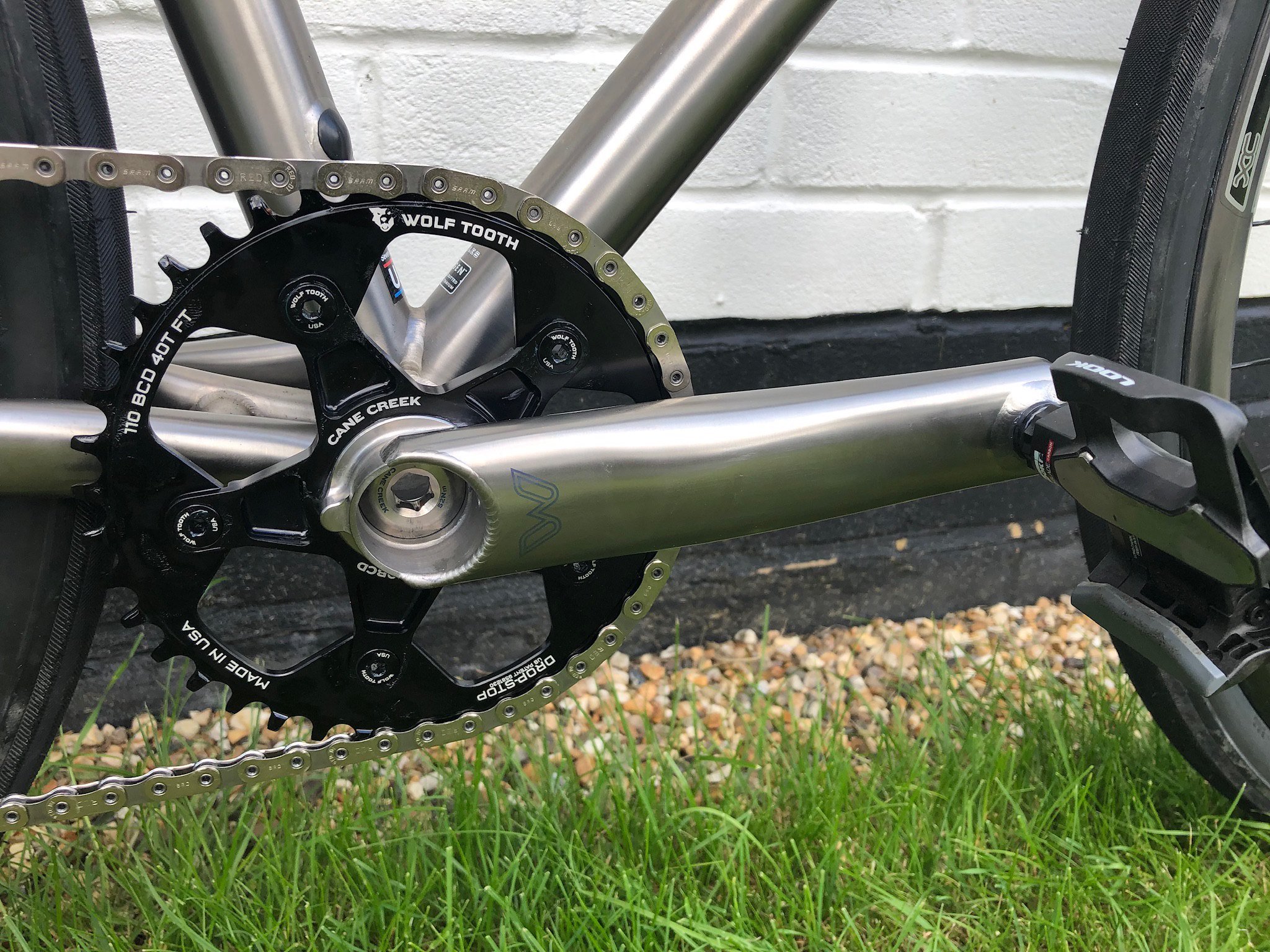 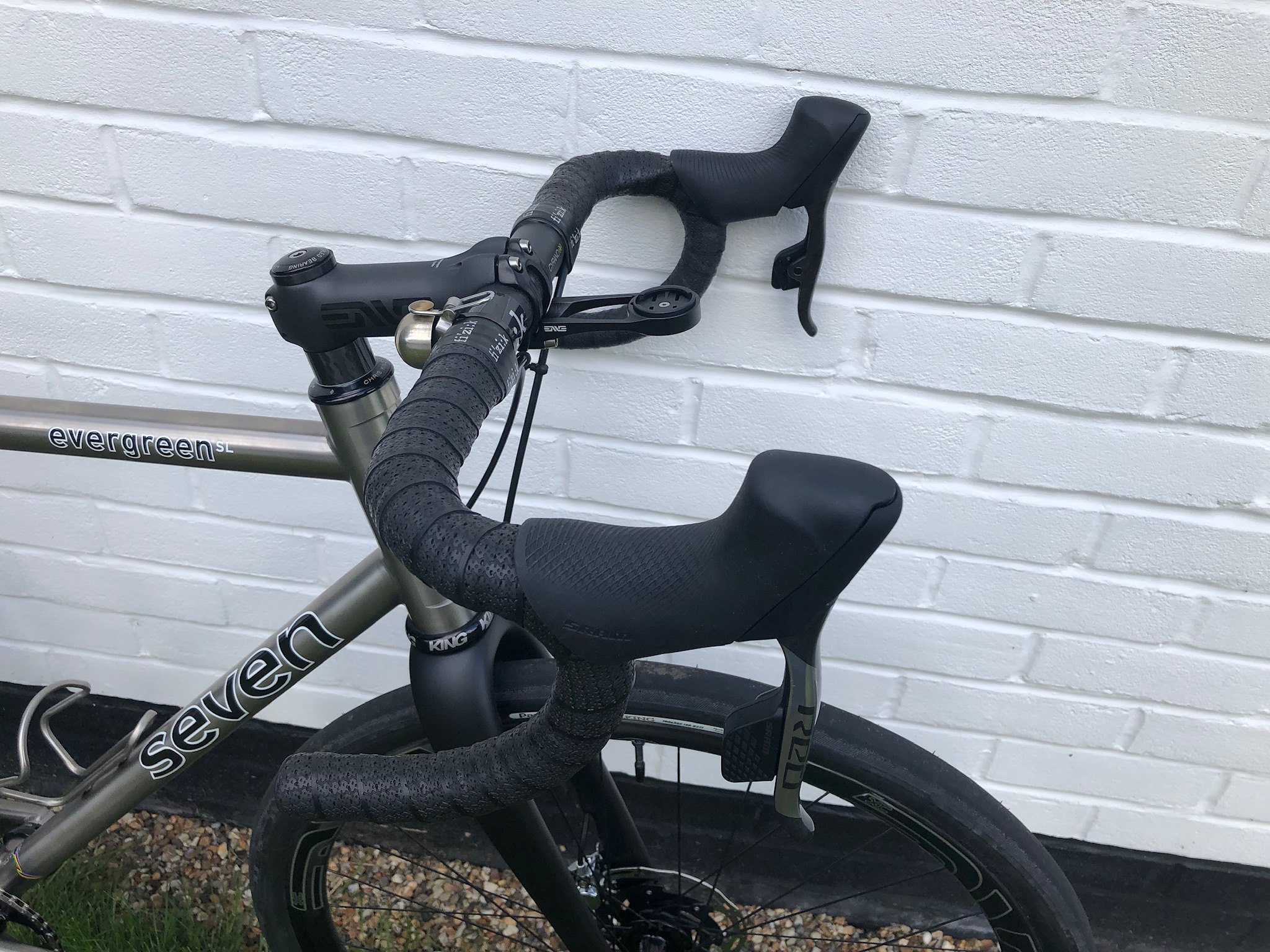 There is finally sight of Eagle AXS being available as components soon, so I can also finish its sister. 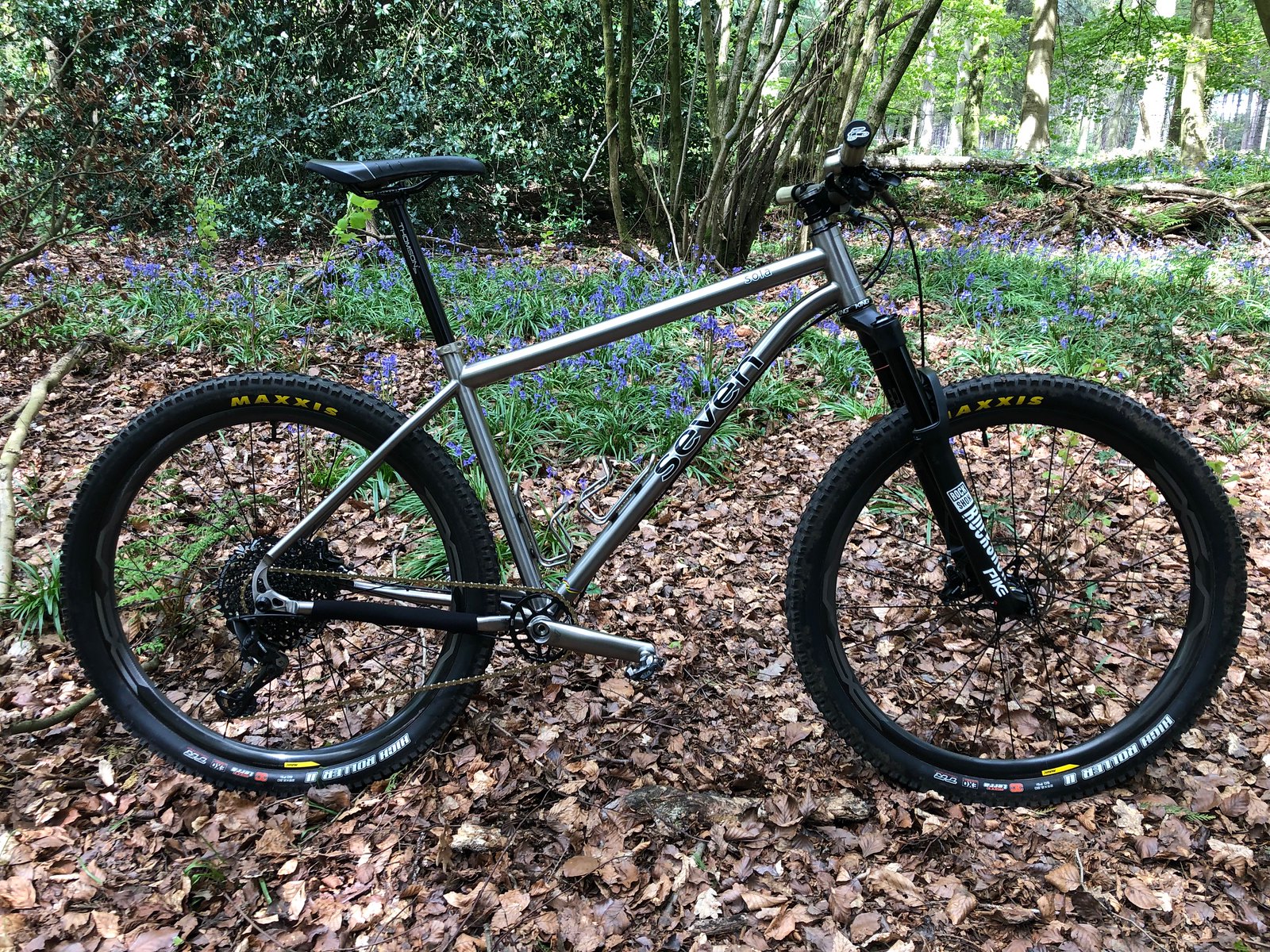 My god, those are some of the nicest Ti bikes I've seen. Respect.
Top

That’s a nice family you have there.

Just back from the first ride and a few observations.

AXS is subtly improved in almost every way. Nothing massive individually but the sum of the parts is impressive:

1) the texture on the shift paddles is a little bit more tactile
2) it is a little bit quicker and quieter
3) the smooth edges on the rotors are a little bit safer
4) the clutch rear mech eradicates chain slap entirely. Combined with the large tyres the ride is eerily quiet and comfortable even over very rough roads. And to think we used to think that 19mm tyres at 150psi were fast!
5) 1 x is definitely enough and the extremeties of the cassette cause no excess drag or noise. The jumps between gears were not nearly as noticeable as I had imagined.
6) although I have used the EE wings on the mountain bike, there is so much else ‘going on’ that it was hard to rate them, but on the road they are perceivably stiffer than the 1st gen Etap Red I was running

Altogether, I couldn’t be happier. I wish they had just upgraded 11 speed with some software because the shifters and brakes are really not different, but this is an impressive groupset and Dura Ace is (for the moment at least) playing catch up in my eyes. I am sure that will change in a few weeks though.......
Top

Nice bikes and thanks for the ride reports.
Top