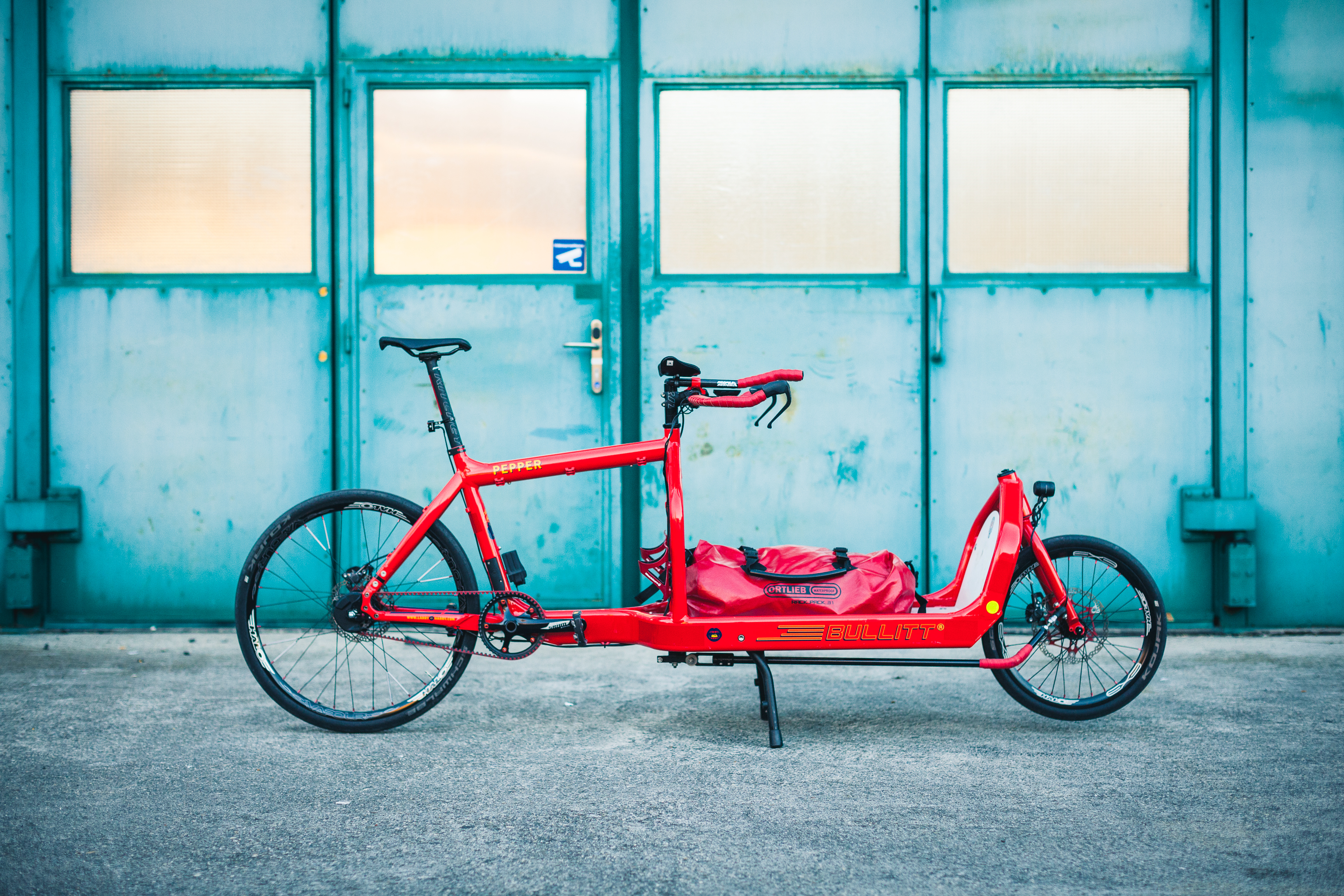 At the request of Calnago, I will briefly introduce my Larry vs Harry Bullitt here. I got it just in time for Christmas 2017 and I estimate that I had about 4500km on it. The front tire is starting to wear thin. It is not exactly a WW-build, but considering that a normal 8-speed Bullitt with the standard honeycomb board weights around 26.5 kg, it is definitely lighter. As in the photos, with lights, bottle cages, and Garmin, it comes in at 24 kg (+/- 300g, I had to use the scale for humans for this one). 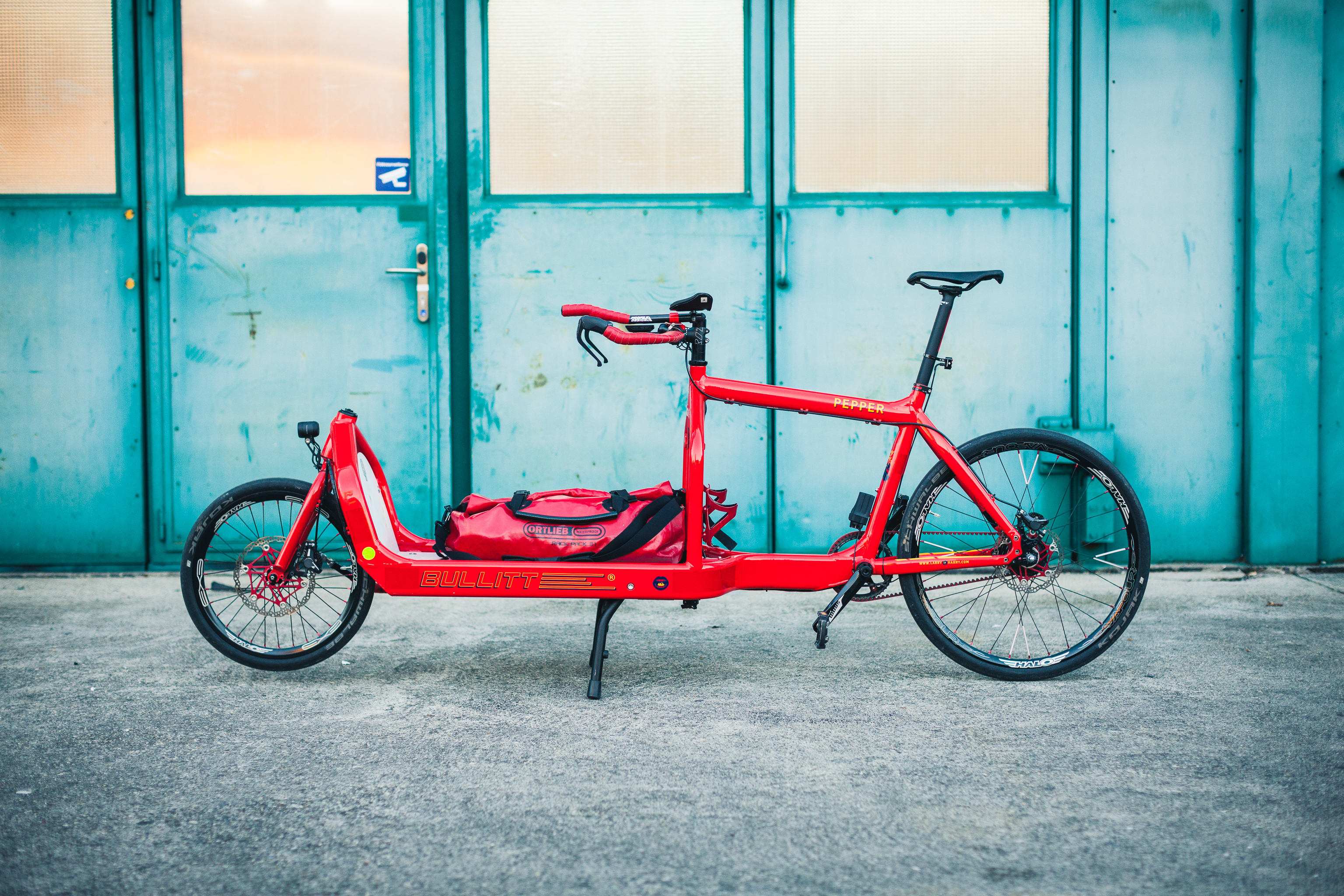 I use it for shorter trips, grocery runs, to transport my instruments, move furniture, carry all the books for my PhD for renewal to the library, and sometimes give friends a ride. I don't have kids, so it doesn't matter for me that the handlebars are where their heads would be, and I am the only user for the bicycle, so I did away with the height-adjuster for the handlebars. 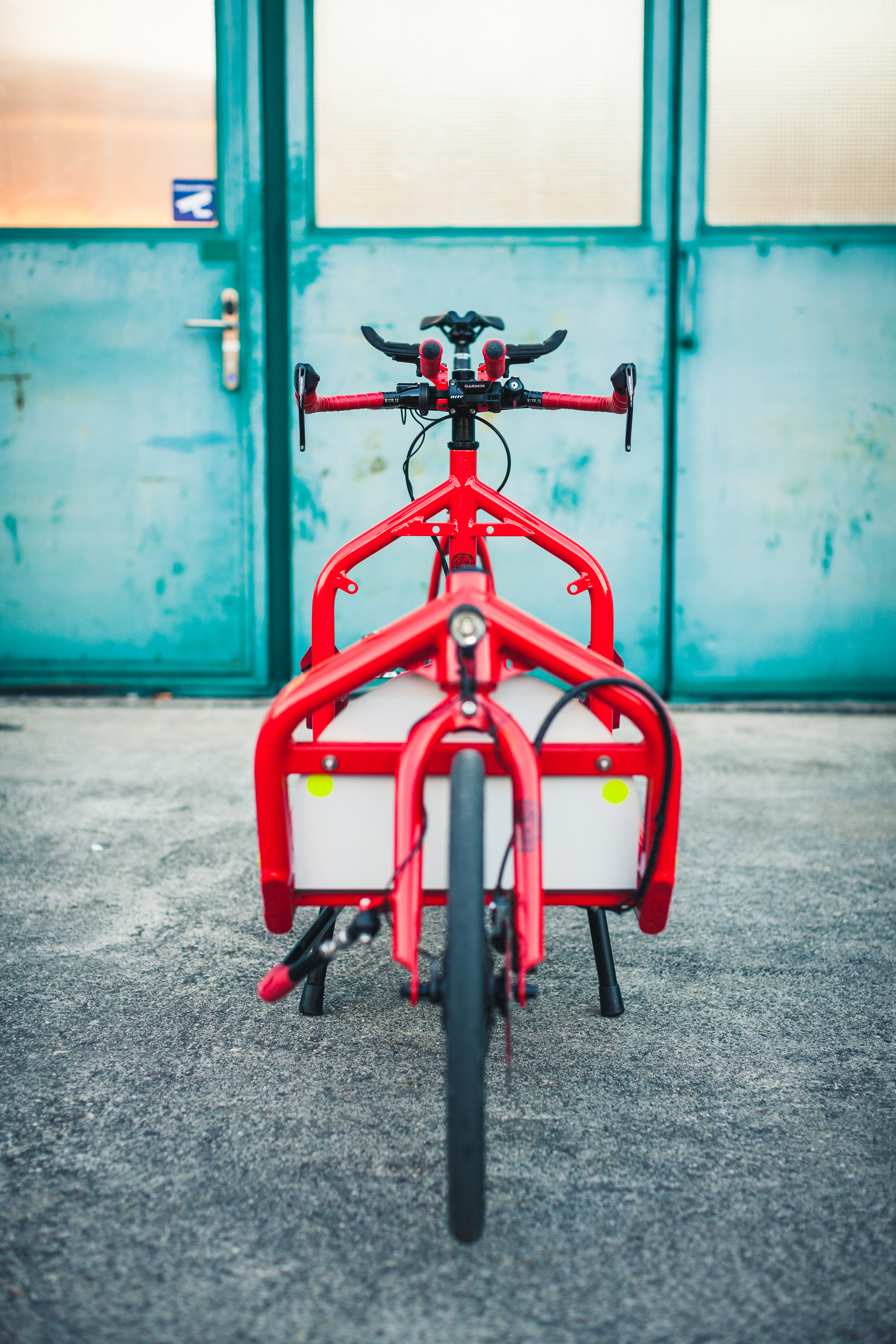 The bicycle 'sleeps' in my bedroom, so I had a reference for the cleaner belt drive. An internal gear hub is important for me on a cargo bike, if you suddenly have to stop in traffic and have to get going uphills, you need to be able to shift while standing. Geneva is hilly, so an Alfine 11 instead of the standard 7- or 8-speed hubs. But I didn't want straight/flat handlebars, preferably bullhorn or drop bars. I ruled out drop bars, as I would have had a hard time even fitting a normal crate of beer below, but how to shift and brake then? The only good solution was using an Alfine Di2, which is compatible with the Di2 road shifters from Shimano, and also with the Shimano Dura Ace 9180 TT-STI, which are meant for hydraulic disc brakes. But at this point, the project became so complex that I decided that I needed professional help, and found after a long search Marcel, who has a small store in Nürnberg/Germany and specializes in custom builds, also for cargo bikes. 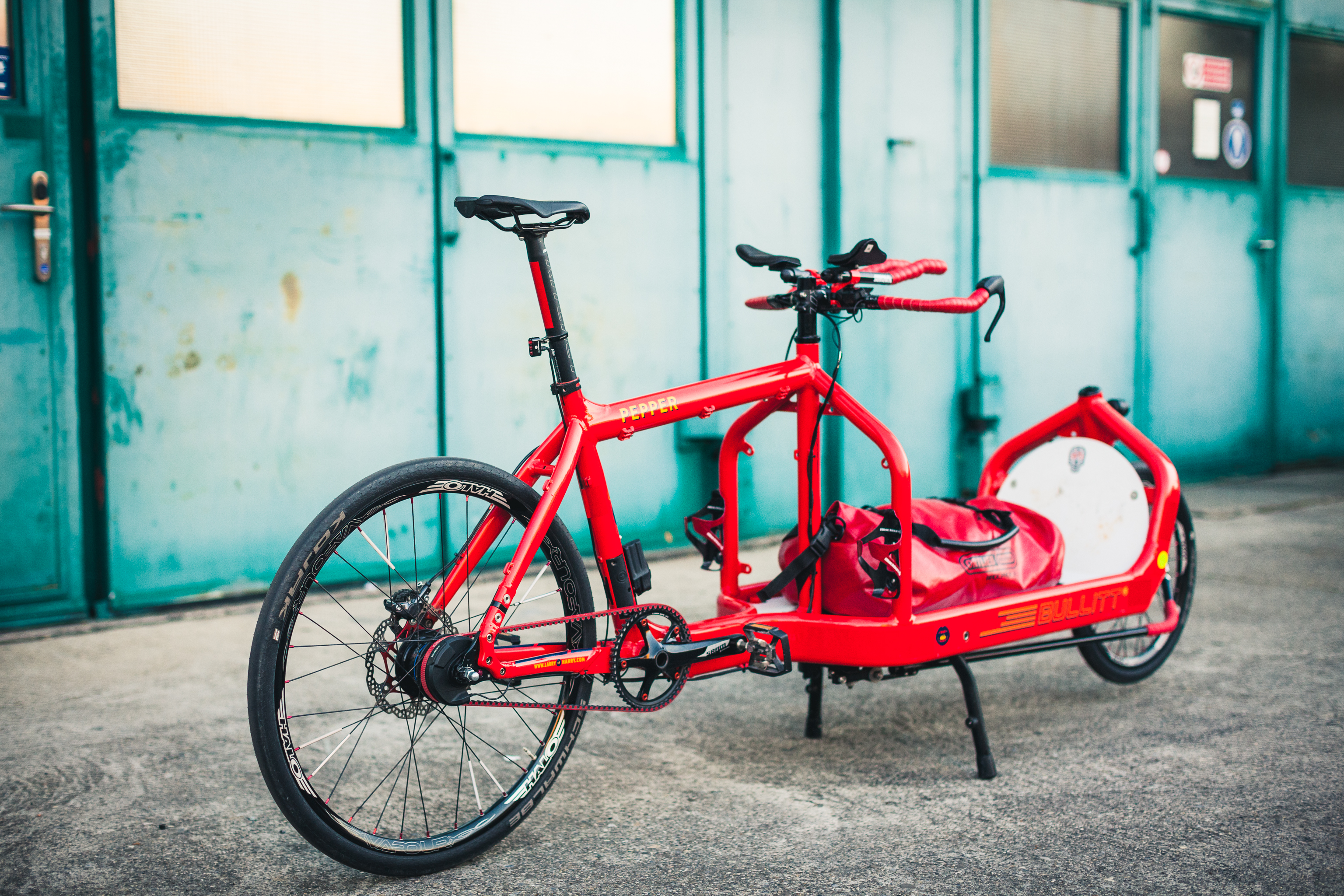 Other notable parts in the build include the handbuilt wheels with halo rims, the lights (Supernova front and back), a lighter board for cargo (only about 1kg), Hope rotors, and a carbon seat post collar. I added plenty of reflective 3M tape on all corners (not so easy to photograph in daylight, but I tried). 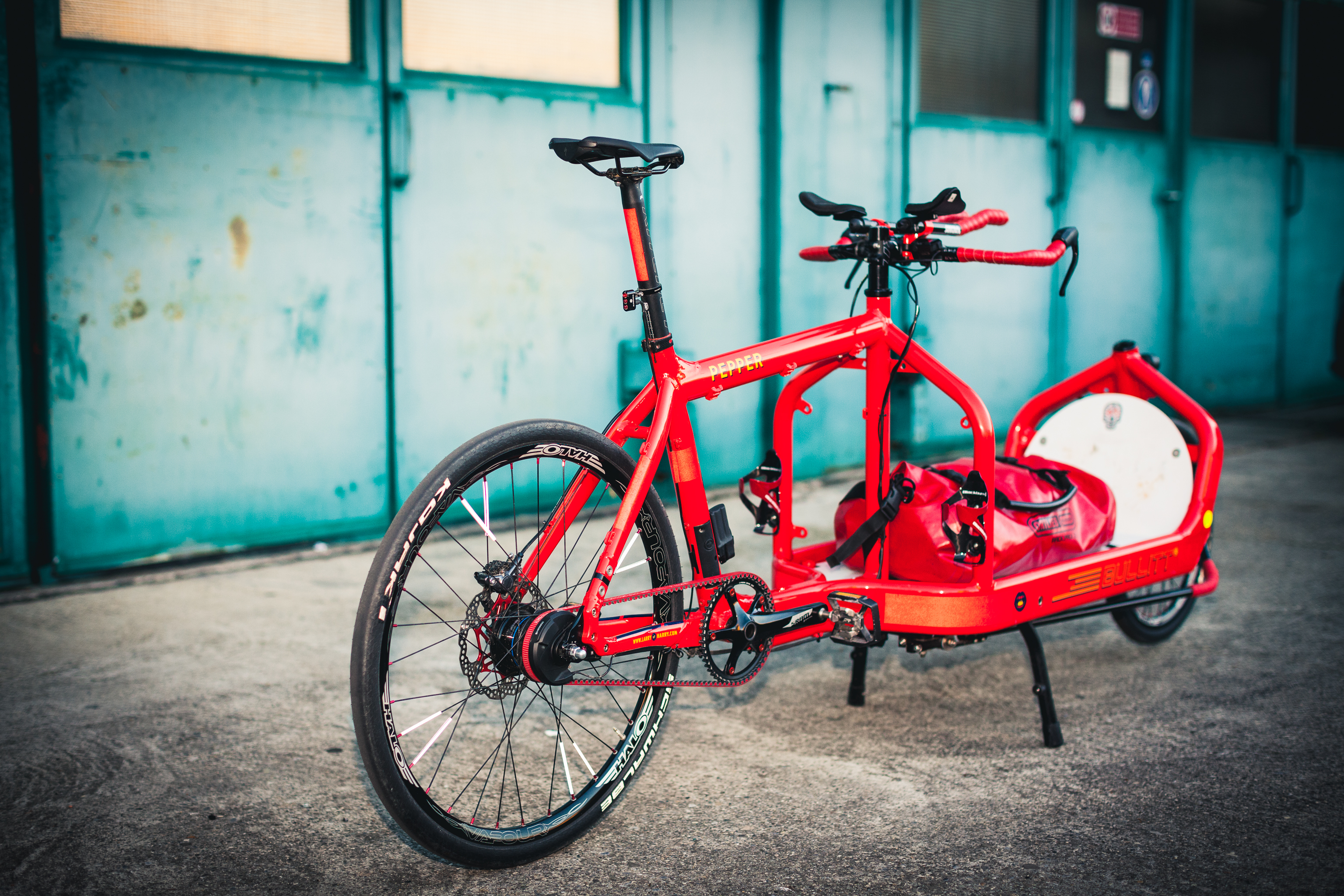 The cockpit is Profile Design. The original bike had only the base bar, after a few months I added the extensions (carbon, bought used, and some parts painted) together with the Garmin mount. 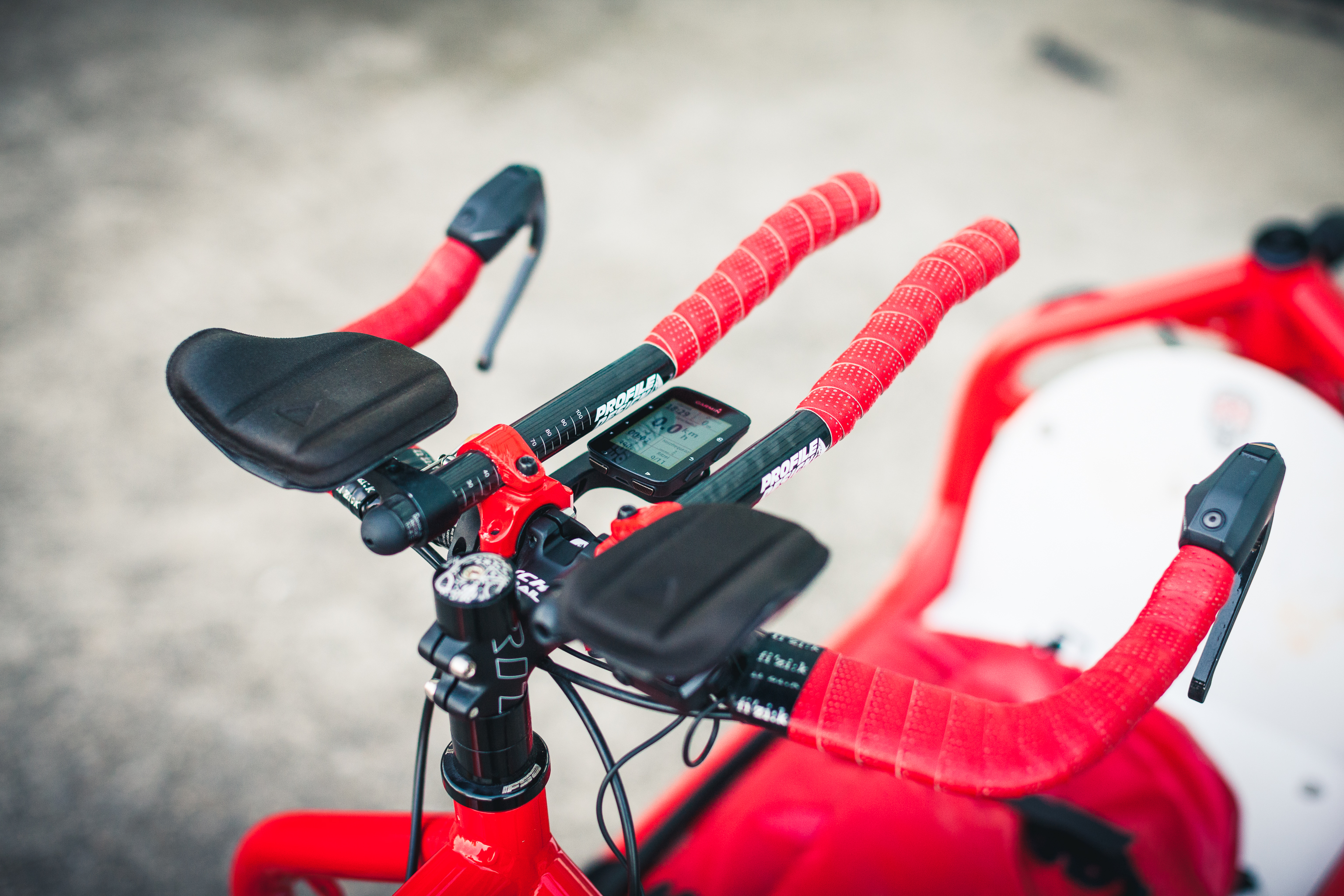 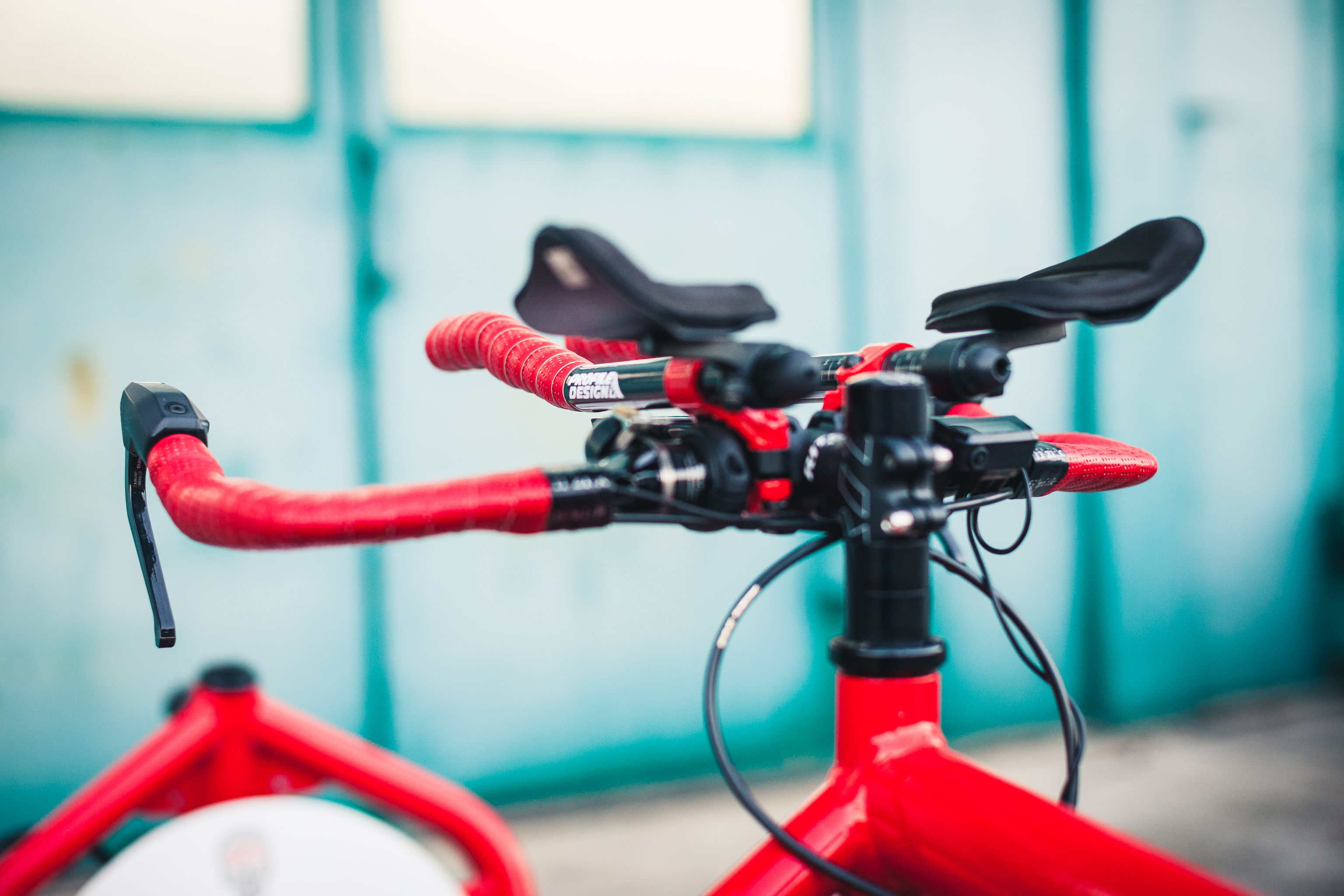 The saddle is still work in progress. The original Selle Italia SLS Flow caused blood in sperm/urine when using the TT-extensions, so I am trying now a TT-specific saddle, which is better, but a little wide in the front for my taste. 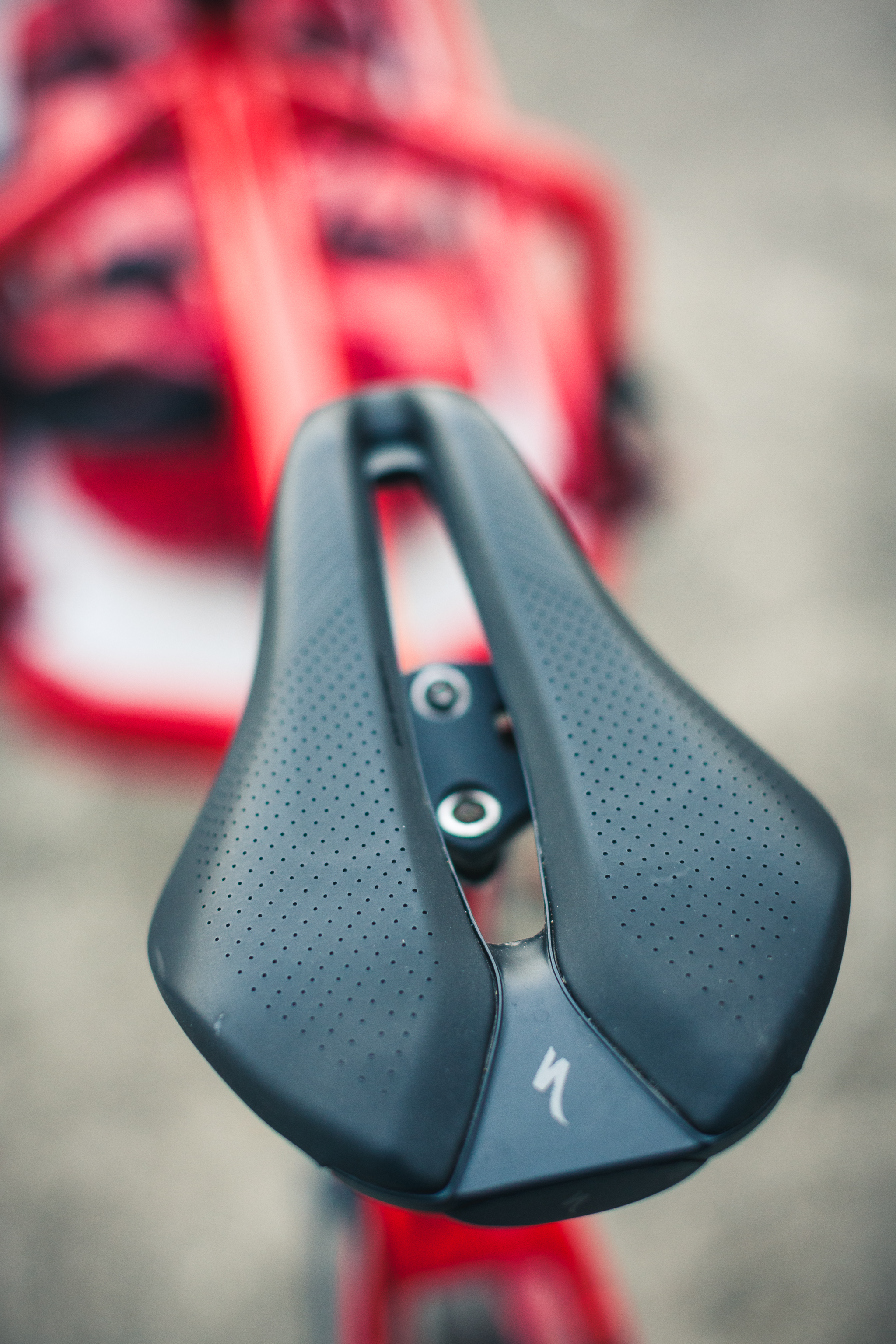 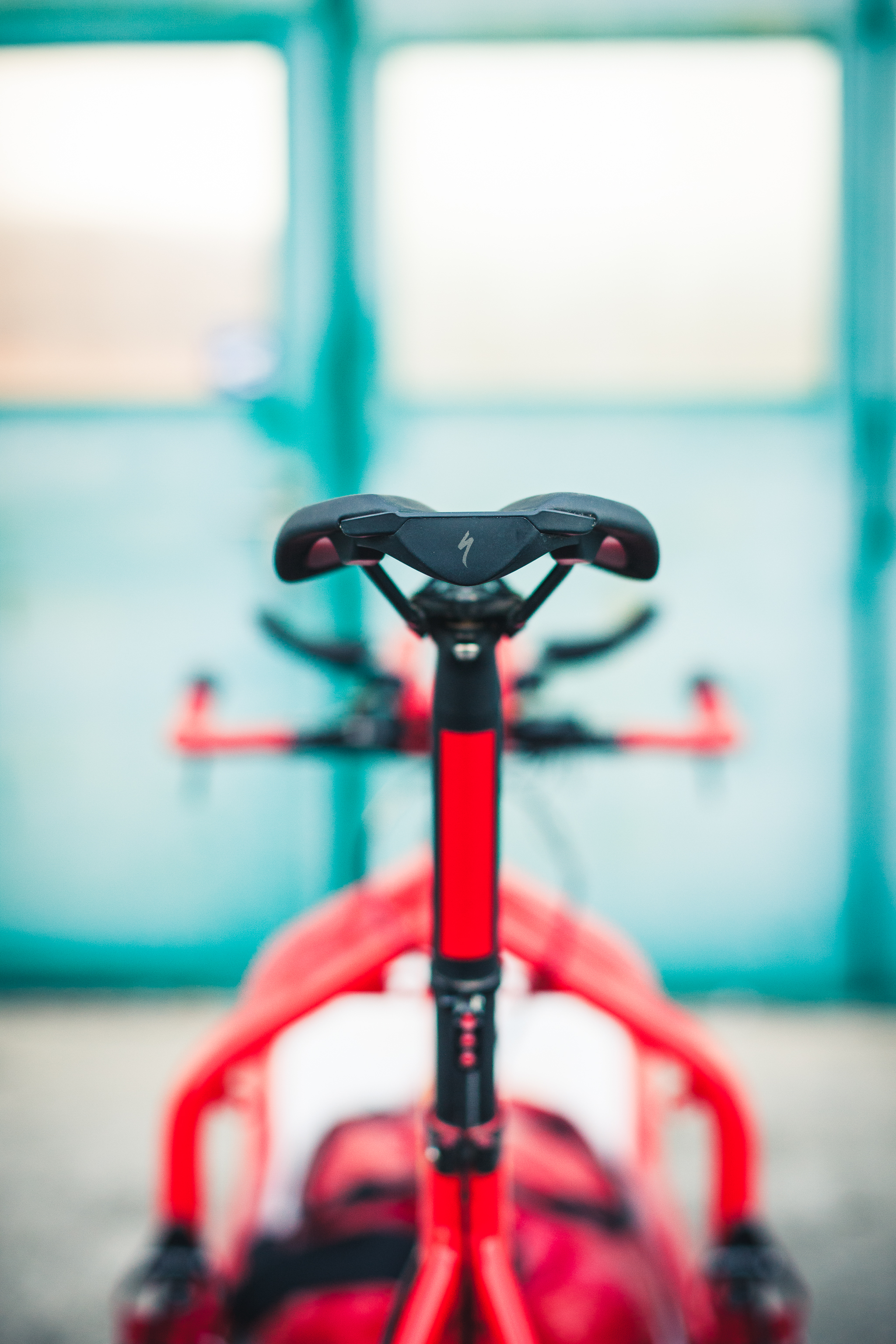 Bottle cages are only on the bike if I plan trips over 100km with it. 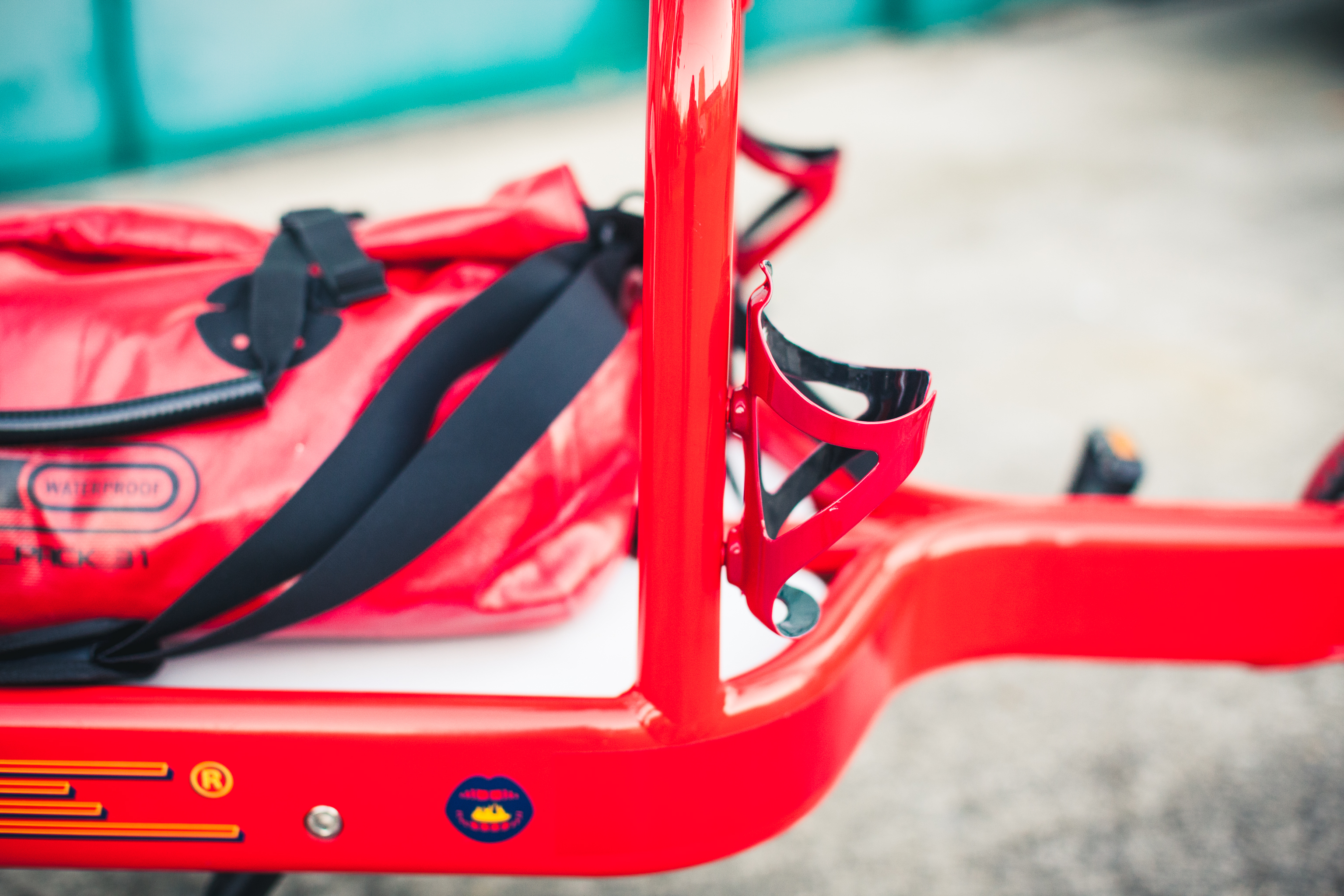 I have a few more photos, but not much more to write. Please let me know if you have any questions on the bike! 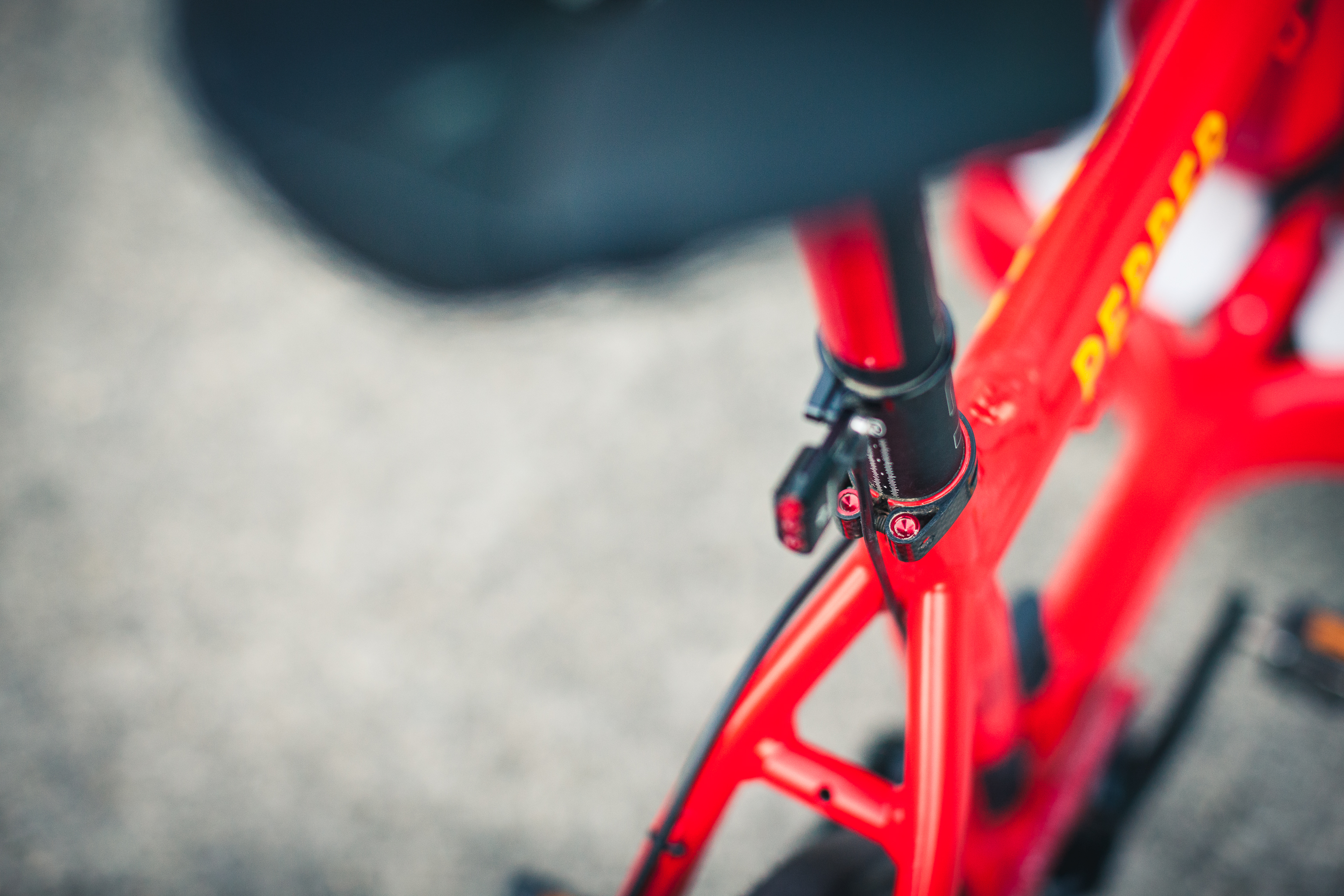 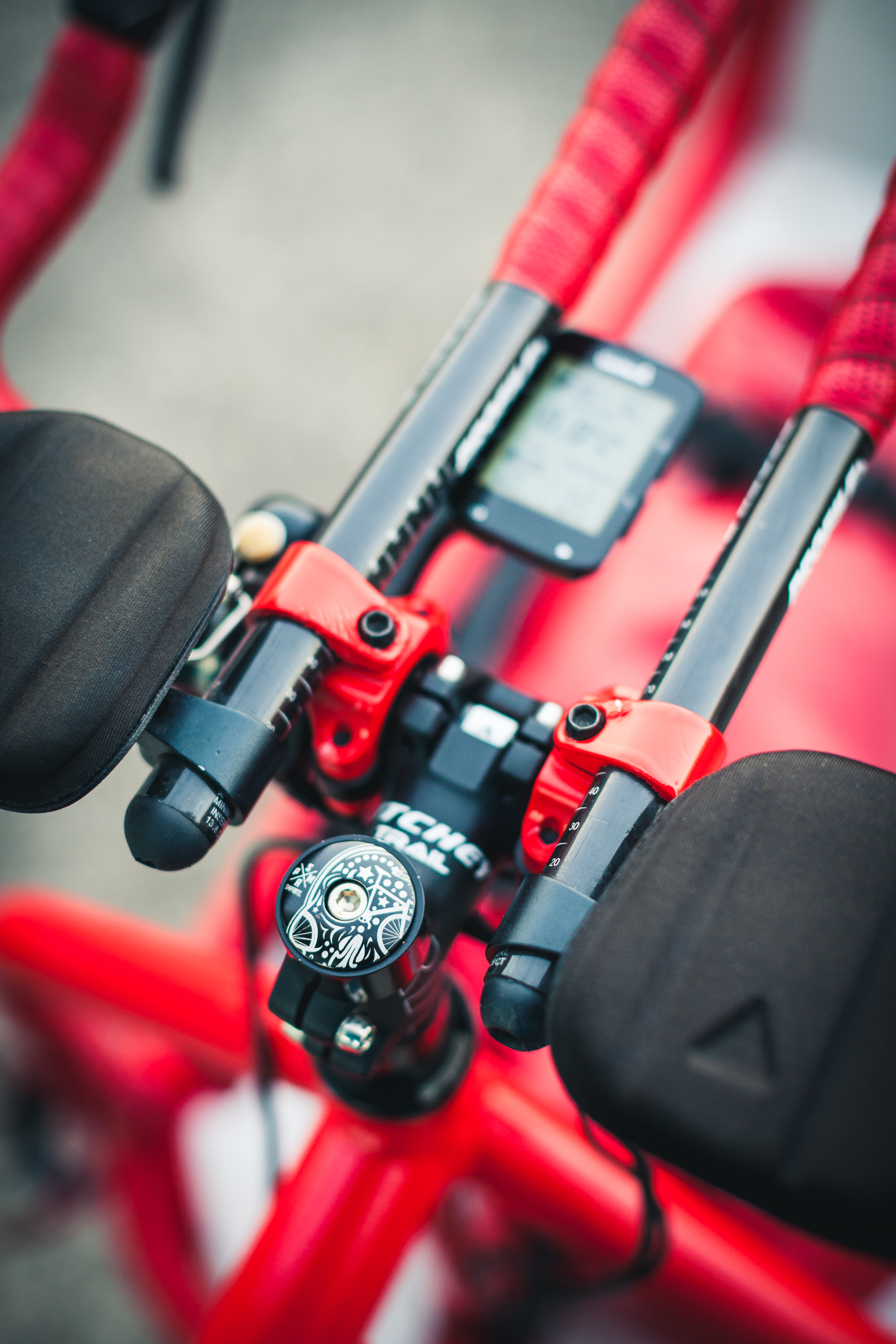 That is amazing. Just needs a disc wheel and trispoke to put it over the top

My Aerospokes are on the tandem

Wierd and wonderful. Can't even imagine what the steering must feel like.
Sorry to hear about:

Nice project... don’t see too much (or any) of that type of thing over here. Thanks for sharing. Wouldn’t be wanting to ride the Alps in/on it, but it would be awesome for doing what you’re doing with it, and from looking at your pics in On The Road Today, it seems like you’re using it for a lot more than just errands and stuff.
Colnago C64 - The Naked Build; Colnago C60 - PR99; Trek Koppenberg - Where Emonda and Domane Meet;
Unlinked Builds (searchable): Colnago C59 - 5 Years Later; Trek Emonda SL Campagnolo SR; Special Colnago EPQ
Top

Calnago wrote: ↑
Sun Mar 24, 2019 8:06 pm
Nice project... don’t see too much (or any) of that type of thing over here. Thanks for sharing. Wouldn’t be wanting to ride the Alps in/on it, but it would be awesome for doing what you’re doing with it, and from looking at your pics in On The Road Today, it seems like you’re using it for a lot more than just errands and stuff.

At the moment it is my most-used bicycle. For the Tandem I lack a partner, my commuter is getting old and frail, and the new road bike is not close to being ready. I don’t always take photos when I am out (or put every little ride on Strava), so if it ends up here, it is likely a more sportive ride. But it is always a lot of fun!

I have ridden up a Tour de France category 1 climb with it already, several other passes (but above 1500m height difference in a ride it starts to hurt a little), and I am considering to try Alpe d’Huez with it.
Konstantin

Amazing, love it! I was considering one for carting the kids to school but probably not with the level of mods you’ve got going on!

Come on though, Alpe d’Huez would be a piece of cake compared to the local Croisette from Le Coin

I see a few of these types of bikes everyday when I drop my daugther off at the creche/day care, but all of them have electric motors. I am very impressed that you can climb the Saleve using that thing! What's the gearing like?
BMC Teammachine SLR01 Disc
Focus Paralane
Top

iamraymond wrote: ↑
Tue Mar 26, 2019 10:33 am
I see a few of these types of bikes everyday when I drop my daugther off at the creche/day care, but all of them have electric motors. I am very impressed that you can climb the Saleve using that thing! What's the gearing like?

With the Alfine 11 it is comparable in the shortest gear to having a 34 chainring and a 35 cog in the back, very close to 1:1. it takes me some time to get up Saleve though, le Coin to la Croisette a little over an hour (or almost double as long as on my normal commuter/cyclocross)

It seems that there are quite some Weightweenies from the Geneva region? Maybe we should try to have a WW-meeting at some point?
Last edited by Konsi on Mon Apr 15, 2019 9:40 am, edited 1 time in total.
Konstantin

1 hour from Coin to Croisette is quite impressive from my standards. I've only done that climb once and it took me 45 minutes. For the non-locals, the Croisette is 4.5km at 10.7%

If we do a meet up or Geneva WW group ride, I'd be afraid of getting dropped by the guy on a cargo bike. So shameful

That is one weird bike. But I like it. Nice attention to detail, very thougtful.

Age and treachery shall overcome youth and skill
Top

No worries, saw a doctor, ruled out anything worrisome medically, so the most likely cause was some mechanical incompatibility with the saddle. Hasn't happened since I switched that one out. And if it comes back, I am not afraid to consult my urologist again.
Konstantin

Yet another WW bike makes it on GCN - always well received too.
Firefly Ti Road
Top

Great ride, really nice. How much weight can the cargo area take? Is it down to how much you can pedal or limited by the frame?