Why using this small spacer on the top of the stem (Team Emirates)?

I am wondering why the Team Emirates is using a small spacer above the Deda stem as Deda stipulates in their manual not to put spacers above the stem.

What would be the problem if they would not use this small spacer on the top of the stem? 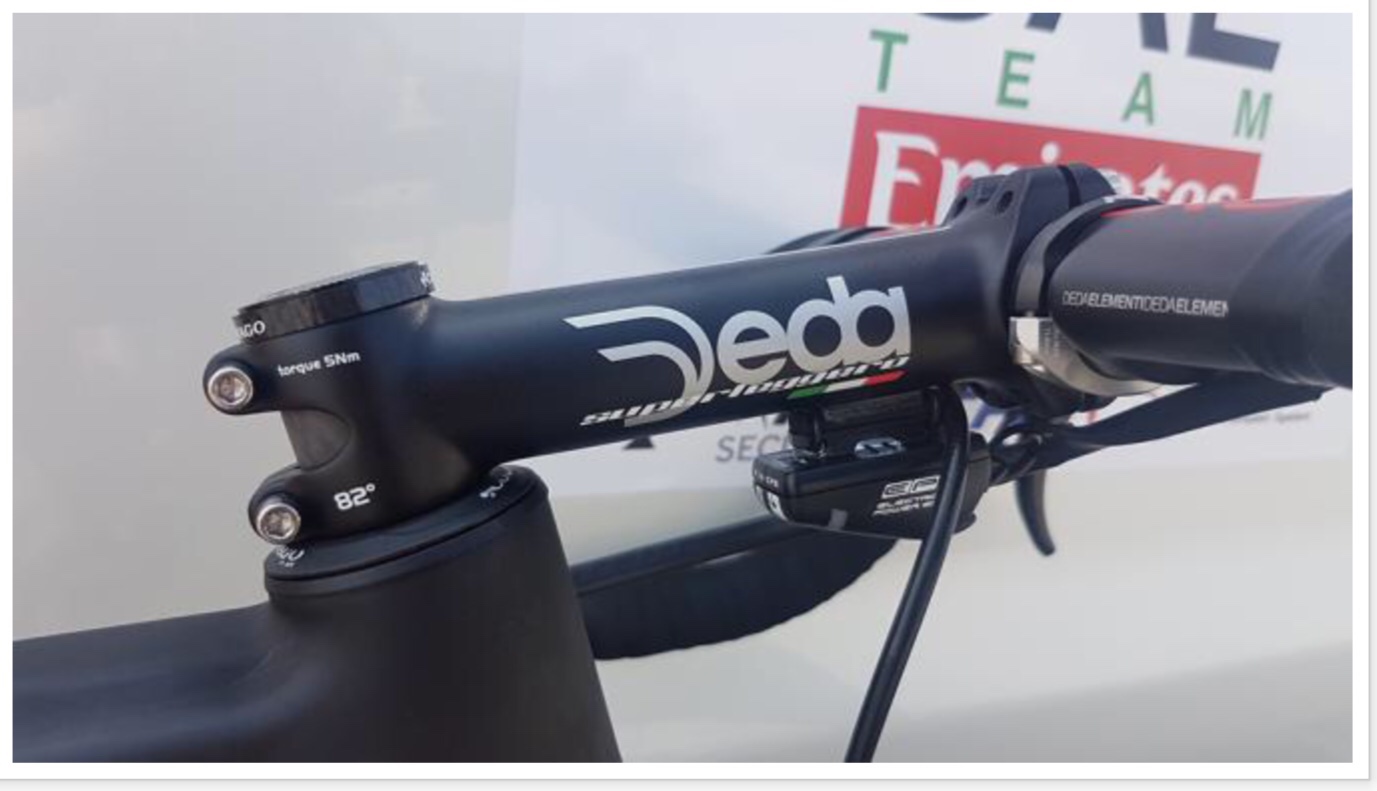 But if Colnago advice for excess above the stem, surely the frame manufacturer's advice should take precedence? Not that I see Colnago specifying that though...

Not sure about the spacer, I'd imagine it would be safer with the spacer than not. The other thing catching my eye is the EPS interface - how's it attached to the stem? Don't see any O rings - is it glued on?
Tarmac SL6 & Campag Record EPS https://weightweenies.starbike.com/foru ... 0&t=153968

Usually the rule against spacers above the stem is to protect the fork against clamping damage at the lower stem bolt, because too many spacers above the stem can elevate the internal expander so it's no longer at the depth to resist the bolt.
Damon Rinard
Engineering Manager, Road Bikes
Cycling Sports Group, Cannondale
Ex-Kestrel, ex-Velomax, ex-Trek, ex-Cervelo

- inside the steerer will be a bung/expander, the top of this may have a lip that sits proud of the steerer, the spacer ensures the full depth of the stem is clamping on the steerer
- top caps typically extend below the visible lower edge, without a spacer the bottom of the cap can foul on the bung so that headset preload can't be set using the top bolt

i'd think deda's advice against spacers above the stem is to avoid the situation where it leaves the clamp area extending below the bottom of the bung, plus having a bit sticking up is both ugly and might be nasty if you fell onto it in an accident
Top

I think this has been suggested by bike manufactures, besides stem suppliers such as Deda.

Here is what Bianchi said for instance.


Bianchi has recently learned that stem assembly's on some bicycles with a full carbon steerer tube may have been incorrectly assembled with spacers above the stem totaling more than 5 mm. Bianchi is requiring all consumers that are using bicycle stem assembly's with this configuration on a full carbon fork to immediately stop using your bicycle and inspect your fork for damage and proper installation.

Excellent answers gentlemen. I left 4mm above the stem, thought it's a good idea to have a 1mm gap from the top of the 5mm spacer so that stem top caps which extends below the spacer in thickness can rest solidly within.

^Mostly this, as Deda is picturing quite a short expander plug. But Colnagos expander plug is very long so no danger of that happening here even if there were a lot more spacers above the stem. The other thing here is that it just may have been cut for the Deda Zero 100 stem at some point as I think I’ve seen both stems being used by UAE and the stack height is 4mm higher on that stem with a more standard 40mm. Don’t know for sure but certainly not a problem with the Colnago fork and expander. As a bare minimum however, even with systems that require the steertube to be a couple mm below the top of the stem (the new ProVibe for example), you want good coverage and support at the top bolt as well to avoid coning the top edge in cases where it’s not fully supported by the expander cap. I actually like the long supportive expander plugs that extend all the way past the top bearing of the headset as that is also a point of stress on the steertube. They weigh more than the weenie options however. Oh well.
Colnago C64 - The Naked Build; Colnago C60 - PR99; Trek Koppenberg - Where Emonda and Domane Meet;
Unlinked Builds (searchable): Colnago C59 - 5 Years Later; Trek Emonda SL Campagnolo SR; Special Colnago EPQ
Top

The Colnago plug has a lip that sits on top of the tube, so you’d have to cut the steerer a lot shorter than I’d be happy doing if you want the top cap flush
Top

Would it still be safe not to use this small spacer on the top of the stem?

Especially in the particular case of a C60 fork with the Deda superleggera stem? And I am not a sprinter.
Top

i'd follow the fork maker's instructions every time, it's the steerer you need to care most about

you can get top caps with a flat underside allowing use without a spacer - subject to fork maker's instructions for steerer cutting, any bung lip. etc.
Top

Zakalwe wrote:The Colnago plug has a lip that sits on top of the tube, so you’d have to cut the steerer a lot shorter than I’d be happy doing if you want the top cap flush

Yes, but that lip is a solid alloy the same outer diameter as the steertube; it would effectively be harder to crush than than the steertube itself. So you can can consider that lip as an extension of the steertube itself as far as structural support goes. Plus, the compression bolt is sunken so if you wanted to run a flush top cap, the top of the compression plug need only be about 1.5mm below the top of the stem to allow for the lip on the cap itself plus some slight compression. In the case of the current Colnago caps, that lip is less than 1mm, so if you had say 1.5mm-2mm of space between the top of the compression cap and the stem top then you’re good to go. I’d be ok with that, but I always look at the situation on a case by case basis.
@TonyM... keep in mind what I said before about that Superleggerra stem having a stack height of only ~36mm or so. If you don’t have any slack to play with, you may be locking yourself into stems with a shorter than average stack height. For awhile they all seemed to be standardizing on 40mm, but now there seems to be some variation creeping back in. And it goes without saying to be extra careful in cutting the steertube when you’re going with a flush stemcap, also taking into account where the top stem bolt is actually clamping to see if it’s really feasible or not. I generally like my standard method of extending the steertube a millimeter or so above the stem top so as to provide a lip to mount a 5mm spacer on top and provide ample space for preload adjustment. Not all systems allow for that. Cannondale for example would have a flush system to be sure their rather short expander bolt is positioned properly at the lower bolt area of most stems. Just look at the cautions of both the fork manufacturer and stem manufacturer and use sound judgement from there.
Colnago C64 - The Naked Build; Colnago C60 - PR99; Trek Koppenberg - Where Emonda and Domane Meet;
Unlinked Builds (searchable): Colnago C59 - 5 Years Later; Trek Emonda SL Campagnolo SR; Special Colnago EPQ
Top

The plug lip is narrower than the steerer though, at least mine is. I don’t see it offering any sort of support to the stem
Top

Look at how it is expanding the steertube, right at the very top of the steertube. It comes in and expands it and is extremely rigid at the very top and very bottom (same idea) of the plug. It’s not a problem there at all. It can’t compress or “cone” the top of the steertube. Even if the lip is ever so slightly smaller (it is by a very small bit) it’s not plastic and still very supportive. I’m going to be doing this job on my own bike this morning before a ride. I’ll take some pics if you like.
Colnago C64 - The Naked Build; Colnago C60 - PR99; Trek Koppenberg - Where Emonda and Domane Meet;
Unlinked Builds (searchable): Colnago C59 - 5 Years Later; Trek Emonda SL Campagnolo SR; Special Colnago EPQ
Top

sungod wrote: ↑
Sun May 13, 2018 11:00 am
- inside the steerer will be a bung/expander, the top of this may have a lip that sits proud of the steerer, the spacer ensures the full depth of the stem is clamping on the steerer

This. And in one word it's safety. With the spacer stem contact point is bigger because stem sits totally on the steerer tube. Also my understanding is that the force of the stem is distributed more evenly as without the spacer the top part of the steerer tube would be squeezed a bit more. The spacer can't be too big naturally as the compression plug has to be inside the tube where the lowest contact point of the stem starts.

IMHO this should be a standard procedure even if the manufacturer have not written anything about it in a manual.
Top