Colnago C64 - Inside and Out

Mapei colours for those so inclined 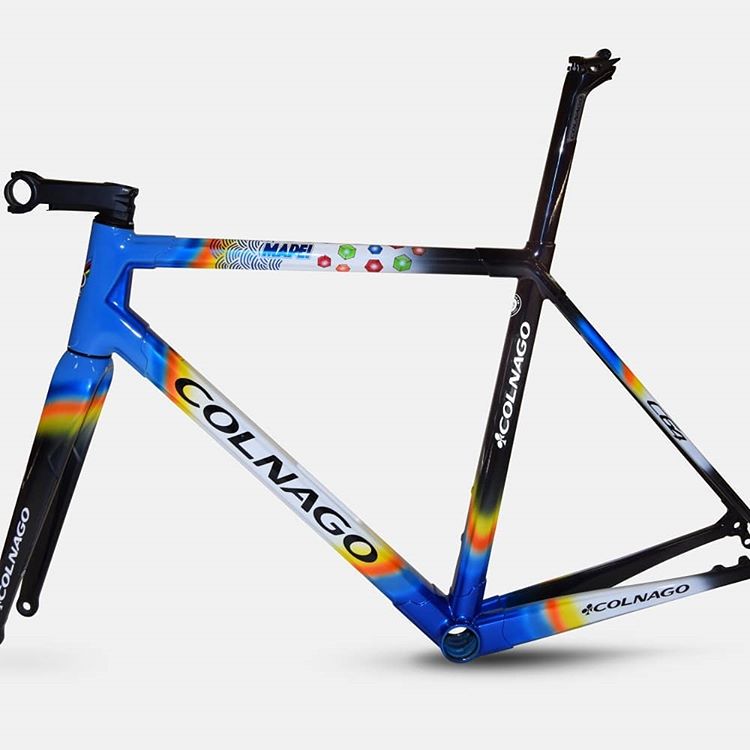 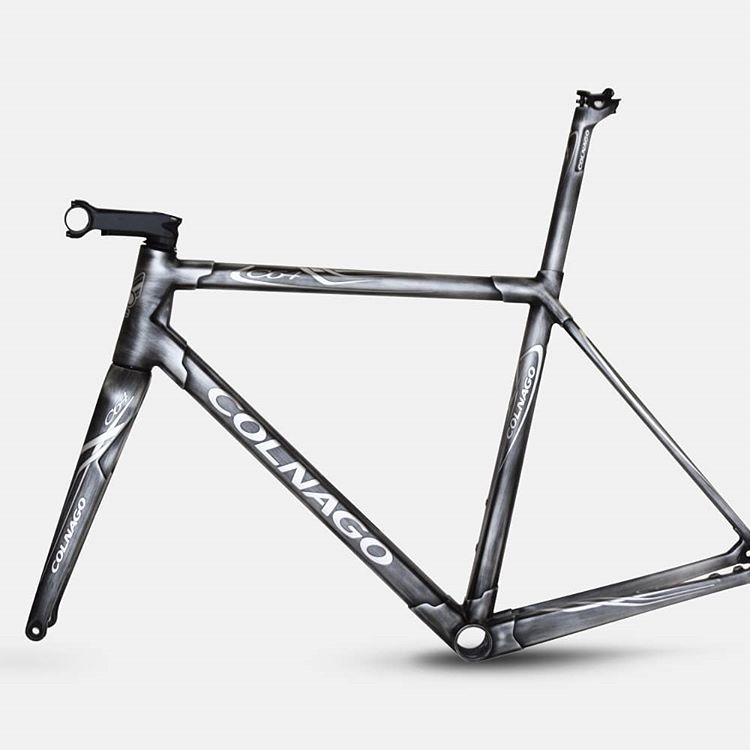 The gunmetal is really, really nice.

Anyone have experience with fitting EPS in the C64? In particular the battery in the seatpost...
Top

IMO the traditional logo would be better on the Mapei. And the distresses metal look, while artistic and something different, does not appeal to me in the slightest. Just doesn't seem like it belongs on a C64. Gravel bike sure.

That new Mapei isn’t really doing it for me. Something about the Blue/orange/yellow fade stripes looks rushed and abrupt, versus having a bit more gradual fade to it all. And despite being out for awhile, I still haven’t warmed up much to the new logo typeface/font.
My favorite color scheme is still PR99 (White paneled look) along with the other two (Zabel Blue PRZA and Saronni Red PR82). That Zabel Blue is just so pretty, especially on a steel Master with chromed stays. But I think Colnago thinks those schemes are probably too “old school” for today as they try to “modernize” things. Some designs are truly timeless.
Colnago C64 - The Naked Build; Colnago C60 - PR99; Trek Koppenberg - Where Emonda and Domane Meet;
Unlinked Builds (searchable): Colnago C59 - 5 Years Later; Trek Emonda SL Campagnolo SR; Special Colnago EPQ
Top

Good news, after 4 rides and an attempted bike fit I am having my frame replaced. Bike fit on Friday went nowhere because as a few if you here pointed out the frame was not big enough. We were not able to put the seat up correctly which would in turn make the bars even further out of whack.
Anthony Mezzini(bike fitter) wrote me a letter saying that it was too small for me and the fact that I couldn't even feel my hands made it unsafe to ride.

Calnago wrote:That new Mapei isn’t really doing it for me. Something about the Blue/orange/yellow fade stripes looks rushed and abrupt, versus having a bit more gradual fade to it all. And despite being out for awhile, I still haven’t warmed up much to the new logo typeface/font.
My favorite color scheme is still PR99 (White paneled look) along with the other two (Zabel Blue PRZA and Saronni Red PR82). That Zabel Blue is just so pretty, especially on a steel Master with chromed stays. But I think Colnago thinks those schemes are probably too “old school” for today as they try to “modernize” things. Some designs are truly timeless.

I get mine next week; will build it up with Campa SR 11s and some nice ENVE Wheels ...
Top

Calnago wrote: ↑
Fri May 17, 2019 6:30 pm
... And despite being out for awhile, I still haven’t warmed up much to the new logo typeface/font.
My favorite color scheme is still PR99 (White paneled look) along with the other two (Zabel Blue PRZA and Saronni Red PR82). That Zabel Blue is just so pretty, especially on a steel Master with chromed stays. But I think Colnago thinks those schemes are probably too “old school” for today as they try to “modernize” things. Some designs are truly timeless.

100% agree on all accounts. And wow, just checked out the Zabel blue and that would be my colour for sure! Though I’d be super happy with any of those three you mention. Many of the other colour schemes don’t really speaking to me.

I could be wrong, but I guess I always thought that the type who goes for a lugged Colnago are also those who prefer classic and timeless design—in other words, those with impeccable taste like Calnago and me

[quote="Calnago"
My favorite color scheme is still PR99 (White paneled look) along with the other two (Zabel Blue PRZA and Saronni Red PR82). That Zabel Blue is just so pretty, especially on a steel Master with chromed stays.[/quote]

We have something else in common. Pretty much every other scheme looks like a pack of midget clowns in the back of a mini came up with them!!

Agreed. That gun metal is a headscratcher. I cant think of a worse color for a carbon bike.

Id like to see the Mapei in the flesh. Wonder why it's a premium over standard paint. Dont they charge enough already?
De Rosa Protos
Colnago C64
Top

Hi all,
new contributor here but I've been catching up on this post string for a while due to having a C64 on the way.

Well....its now in my ownership and the build shortly begins....... I'm going for a neo classic build with full mechanical Campag Record, 3T bar and stem, astute saddle and a lovely understated pair of DT Swiss PR1400 di-cut oxic wheels, being top-end aluminium for reliable braking (I am in the U.K.) but with an all matt black finish, including the brake track. Tyres will be either Challenge open clinchers or Vittoria Corsa TL, haven't decided yet.

I've been lucky enough to have owned quite a few high-end bikes over the decades, from my original background in MTB through to road and cyclocross/gravel but have always promised myself a pureblood royalty Superbike and all things considered, decided on the C64 as one of the very few left around.

It's not a snob thing, I've read all the gushing reviews and the negative comments alike and would like to think that I will give an honest review of my own at some point either way, but I'm in with both feet now and looking forward to the build and the coming miles.

The way I see it, the premium you pay for the C64, made in Ernesto's Italian facility with his 28 staff, is IMHO not that great compared to the high end asian made competition and when you consider Colnago sponsor a world tour team at considerable cost, it makes even more sense and they got my vote.

It would be easy for Ernesto to focus on full custom, Italian made small batch production and cut ties with the grand tours, but that's not where Colnagos heart lies and asian made Colnagos are a high quality reasonable compromise to allow the artisan C-series to continue.

Thanks to Calnago and the many other contributors who have undoubtably made my build an easier prospect, I'll post up some pics when its complete, although a imminent holiday will add in a impatient delay.

Nice, what color, what size? And if you’re not doing a separate thread for it, be sure to post a pic of two in the Pictures Of Colnagos thread.
Colnago C64 - The Naked Build; Colnago C60 - PR99; Trek Koppenberg - Where Emonda and Domane Meet;
Unlinked Builds (searchable): Colnago C59 - 5 Years Later; Trek Emonda SL Campagnolo SR; Special Colnago EPQ
Top

Hi Cal',
really nice work on your original post mate. My frame is a 54s and in red the same as you OP pictures. Out of interest, the owners manual now makes reference to the two options of gear cable routing with the second option being your crossed bare cables in the down tube method. I assume with this guidance now coming from Colnago officially, there shouldn't be a problem with the internal ribbing in the down tube interfering with the cables so will probably give that a go. The second thing I've also noticed is that my framekit has come with a length of gear wire sheath for use under the BB lug, but the owners manual makes reference to this sheath being supplied already fitted to the top tube as a tracer to pull the brake cable through and then to be used on the BB lug. The problem is, the sheath wasn't pre-fitted to the top tube at all, but was neatly curled up in the accessory box with all the other bits and pieces !
You've got to love the Italians giving me a bit more 'fun' in the build, having to thread my own brake cable internally etc.

I'm a bit of an Italiophile in all walks of my life though, so it doesn't phase me.
Top

@Steeley, I'm glad to hear that Colnago is actually including the internally crossed method of gear cabling as an option now in their manual. Was it not in there already? Although it may have been mentioned in the C60 manual as well, but maybe only cautioning against it. I can’t remember. As long as you don’t get the cables twisted, crossing is fine as long as they’re on the same plane. And as far as I'm concerned it's the only way to go on this frame, especially with the cable port stuck in the top middle of the downtube as opposed to a port on each side of the headtube lug, which would have made for a much nicer mechanical setup. The way they had all their C64's cabled during the launch made me ill to look at. Plus, there's no way to avoid significant cable rub on the headtube using that method. So, if they're going to change where the cables enter the downtube like they did, then they'd better say "out with the traditional way" of cable routing as well, so I'm glad they've recognized that.
That sheath is just for using to run the brake cable through the top tube and, at least on the frames I've seen, is always prerun through the top tube for you then taped at the ends. I guess they're getting lazy in the final packing stages but in any case, it's easy to run through the top tube without the plastic ports installed, then you can use a piece of sheathing for running new cables through down the road if they need replacing.
As for underneath the bottom bracket, I absolutely love the molded in cable guides, but I'd opt for some thicker sheathing than what they supply. The stuff I used as an example earlier in the thread is great, but the walls on it are very thick. That is good, but takes a bit of effort getting through the guides. Jaguar makes some tubing that is a good combination of thickness (much thicker than normal sheathing) but not as thickwalled as the stuff I used, and would be a good alternative. Also, Colnago supplies a piece of sheathing about 4" (10cm) long that is for use in the rear chainstay where the derailleur cable exits, I think it's like a combined plastic ferrule with an extended piece of sheathing about 4". It allows the cable to get around the ridge in the dropout where it turns upwards. If I was building this bike, I'd run a length of (thicker) sheathing long enough to extend around the BB shell all the way through the chainstay, just long enough to get around that ridge near the dropout to provide a better, smoother route around that ridge, and maybe cut most of the tubing off the ferrule so that theres enough to get through the exit port, but that's it. Let the thicker stuff I just mentioned do the dirty work of getting around the ridge. The stuff Colnago supplies, like everyone else, is thin and will wear through in fairly short order when there is a ridge it has to be squeezed against.