Well... I couldn't quite find a topic on this particular avenue of tuning, so I might as well start one.

Standard weight (as new) is 78g.
The rear plate is steel - something SRAM started running when their first years of Red (pre-Yaw) were accused of being too soft and leading to poor front end shifting.

There isn't too much to remove from the body, but I did some rough work. Bolts remain the same as standard - they're quite light as provided and I could not source a lighter bolt with a small head. 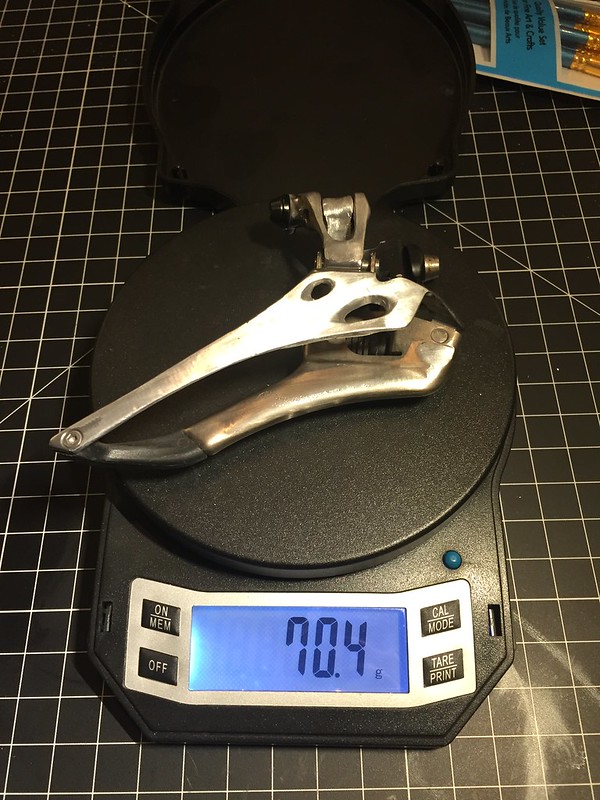 There is some body material removal not shown in the above picture. The majority of mass comes through that steel back plate. I did not want to drill through it because I did not want to compromise the mechanical properties of the design (and I like good shifting in the front). I still have a Tiso front derailleur around here somewhere and read that it shifts well with SRAM Red shifters, that's nice and light... but I also like the YAW system

Prendy I hacked away at the rear , no issues whatsoever although not red yaw just red I don’t see it being a problem . You could also put a carbon cage on the front . It does not really save that much weight but they look cool. .the lightest one is in the high 40s to around the 50 grams area. I could have hacked away a bit more . One of them has a crack due to my carbon chainring break but it still works fine just needs a bit of tape that’s all , it’s amazing what works. I don’t use them anymore since I jumped to single ring . Just not sure if I could part with them ,the rear is titanium and it’s a complete pain to hack away the material takes ages . I’m surprised the yaw is steel I would have thought it would be it like these old red mechs .

Nice job on your mech .