So, I'm new to this forum and how great it is to read some of these threads of likeminded addicted weightlunatics. Hello to you all!

So I got this second hand bike and have been stripping it down replacing what is economically feasible with lighter parts. My place is very hilly so a nice climbing bike is a great thing to have.

Saw some threads of people comparing compression plugs of sub 10 grams, smaller than five stacked coins by the looks of them. Is this supposed to be enough to quote "preserve structural strength" of the carbon headset?

I did a test with my noname 40 gram aluminum (around 50mm tall) compression plug to see if there is actually some flex in the steerer tube. I loosened the stem bolts completely and then set the plug tension so that it could barely (with some effort) be pulled/twisted out of the steerer tube ( by hand). Afterwards I tightened back the stem bolts to where the stem would no longer slip and the added another half turn.

Lowe and behold the compression plug was still just as difficult (easy) to remove as before.

Does this mean that the steerer tube of my carbon fork (model unknown) is quite stiff compared to the rest?

Anyway I've been tempted to ride without a compression plug and I think I'll try it. I've seen some pictures of damaged forks, most of them damaged elsewhere, and they seem crashed or overtightened.

The steerer tube wall seems to be a good 4mm thick. Is this what you guys have too? Supposed to be 350gr, claimed by the seller, so it can't be too thick either.

I appreciate your input. /a
Top

Conservative answer is to ask the frame manufacturer, as much for safety as for warranty purposes. But since you bought it used, warranty may be moot.

Realistically, it's probably fine without. Those ultralight low stack compression plugs aren't providing much compression support anyway, possibly even worse off than none at all by placing the support in such a small area versus the full clamping stack height of the stem.
Top

I think we all have considered this over the years.

IMO, whether or not you have a plug & cap, if the stem slips and the bars twist, you are likely to stop riding immediately to address the problem. And the chances are, only one of the 2 stem mounting bolts would fail at any given time. So this may not actually be the dangerous issue we see it as.

In all my years I have never heard of a case where the stem actually came vertically off the steerer, or the headset loosened and mangled itself, such that having a plug and cap would have prevented that.

Also, I've adjusted my threadless headsets many times without a plug & cap to create the necessary downpressure on the headset bearings.

So to me, the only realistic reason of having a cap (and a plug to secure it with) is to prevent rain from accumulating inside the steerer.

FWIW, my system is an Extralite expander plug, Parts of Passion carbon top cap, and a Schmolke carbon bolt. This is the lightest plug & cap setup I have found (short of using a cap-only, such as Tune Verhuterli).
Top

Thanks for the replies...

Just wanted to mention that I've ridden 150km without compression plug now without any issues.

Steep climbs and steep decents, in and out of the saddle giving hell. I'm 65kg, no prob.

I'll keep riding this fork without and the next bike frame I get (superlight) I will compare the fork steerer tube flex and mention my findings here.

As a last thing I thought I'd mention that thr steerer tube is not cut flush with the stem. It sticks out 15mm. This might be the lightest substitute for a superlight compression plug as the tube is not much weaker at the top of the stem as below.

Compressing a stem down without the cap/plug is a pain in the arse...too hit and miss...

I'm considering ditching the compression plug too on my climbing bike despite the fork manufacturer warning against it...I'll try it, if it doesn't work it I'll put it back in... 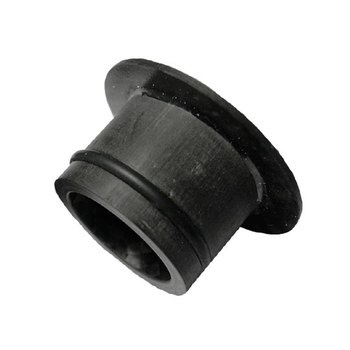 In the days of steel steerers, the compression plug used to be only for adjusting the headset and holding the stem on. But now, for many light carbon forks, its main job is to prevent the stem clamping forces from stressing the steerer.

Sure, lots of people ride without one. But stress is additive. (1) Stem clamping compresses the fork, (2) rider weight creates a bending moment, and (3) a big bump multiplies that.

Wingnut, is this the Schmolke plug?

My experience with not running a compression plug.. The stem always creeps upwards and eventually you'll get knocking/play in your headset because there is no compression. **Torqued to 5nm. This resulted in a few marks along my steerer tube on one of my bikes as I rode it like this till I got home. (I'm 60kg running a MCFK stem + MCFK Expander) Perhaps a better solution is to run a Tune Gum Gum/EE Cycleworks/Extralite Ultrastar/other and call it a day. Beyond that, with any expander, my steerer (Evo Hi Mod) literally expands a bit to the point where you can't put spacers without loosening up the expander. If the steerer is flexible enough to flex outwards from the expander, I'd probably run it inside to counter the forces exerted by them stem clamping onto it. I don't like to run things at their max torque, so with an expander, I run run things slightly less tight (3-4.5nm)

Had similar creeping up stem. Even with gum gum eventually I was getting headset play. No plugs riding Canyon.
With current bikes extralite plus top cup add about 10g, so I can live with it.
Cervelo S5
Cervelo R5 VWD 5637g/12.43lb
Pronghorn XC SW Race 8284g/18.26lb
Top

For those of you who claim "stem creep", did you use carbon paste for better stem grip?
Top

Well that's the first time I've ever heard that one. That's what it's made for, no? Seatposts, stems, handlebars etc. I've been using it on all those things including steertubes since it became available. Never seen or heard of an issue that it can cut carbon fiber. Got any specific examples or pics?
Colnago C64 - The Naked Build; Colnago C60 - PR99; Trek Koppenberg - Where Emonda and Domane Meet;
Unlinked Builds (searchable): Colnago C59 - 5 Years Later; Trek Emonda SL Campagnolo SR; Special Colnago EPQ
Top

Several years ago Trek issued a service bulletin advising against using it on carbon forks. 2008 or 2009?

And not all types are abrasive. Under a microscope you can see either tiny plastic spheres (these are okay) or bits of sharp grit.
Damon Rinard
Engineering Manager, Road Bikes
Cycling Sports Group, Cannondale
Ex-Kestrel, ex-Velomax, ex-Trek, ex-Cervelo
Top

There are really two issues here: Slip, and compression damage.

Slip is generally a gradual process and something where, if you take a fall, the stem can rotate or twist eccentrically on the steer and cause scoring and crushing as it slips. In ordinary riding, it can lead to an abrasive effect to where I've seen the steer marked by an abraded band at the top and bottom of the stem. One definitely needs to eliminate such movement and the damage it can cause, and that's not always possible if the steer is flexible enough to compress under the stem. As someone mentioned above, I've also seen an expander increase the diameter of the steer enough that a stem or headset spacers wouldn't slide on over it. That tells you right there how much flexibility there is in a steer.

Compression damage is something else I've run across. I've handled more than one fork whose steer was split and fractured at the top, both from failure to use a plug or from installing the plug so far down the steer that top of the steer wasn't protected and collapsed under stem clamping. It isn't just about using a plug, but being sure that it offsets clamping pressure of the stem by being positioned precisely inside the stem.

To Damon's comments, I had seen a variety of carbon pastes cause surface abrasion of a steer, a carbon bar, a carbon seat post, and so on. It didn't appear to go deep and seemed to frost the surface resin in the component but not to cut into carbon fibers. If more is happening, I'd love to see some samples. I'd expect damage from the paste with the tiny spheres as well, because I'd expect them to compress and cause problems. If there's evidence that one is demonstrably more dangerous in use than the other, it should be announced widely.
Top

Ha. Ok. Several years ago Trek advised against pretty much everything as a CYA attempt when their steertubes got some bad publicity for breaking. I think they still say you can't use FSA stems in their literature. Think I'll take Treks warning on this with a grain of salt. And I like Trek.
And talk about the most unwieldily compression plug ever designed. They had it back then too, complete with a bigass spring and washers etc. they also still advise to put at least a 5mm spacer between the stem and the top of the headset, since it appeared that the steertubes had a tendency to break at the bearing site.
Colnago C64 - The Naked Build; Colnago C60 - PR99; Trek Koppenberg - Where Emonda and Domane Meet;
Unlinked Builds (searchable): Colnago C59 - 5 Years Later; Trek Emonda SL Campagnolo SR; Special Colnago EPQ
Top
Post Reply
25 posts