Thanks! I thought the wheels were a bit overkill at first being super-light and tubular, but it's so worth it for the ride feel

. The rims are probably just alloy, but they do have very good, stong anodisation that doesn't seem to wear off too easily. It's almst like it's more than skin deep, if you get my jist.

I finally mangaged to acquire myself some sram 10 speed shifters to go the with a rear derailleur I already have. I'm going to bolt-tune the RD, sand the levers (already done the derailleur cage) and cut the shifter body a bit so I can still fit the Schmolke carbon shifter clamps (8g for the pair!) that @campagowlo very kindly sent me. I might have a go at making my own hoods too, the stock sram ones weigh 22g each!

Depending on how much I tune the new groupset, the bike should be down to 6.6-6.7kg with the alloy tubs and ~7.5kg with the Aksiums.

Let the tuning commence! The first stage is to take everything apart, weigh it, and assess for weight-saving opportunities.
This seems a bit heavy for a Red 10s shifter, but it does have the reach adjustment which I suppose adds weight. 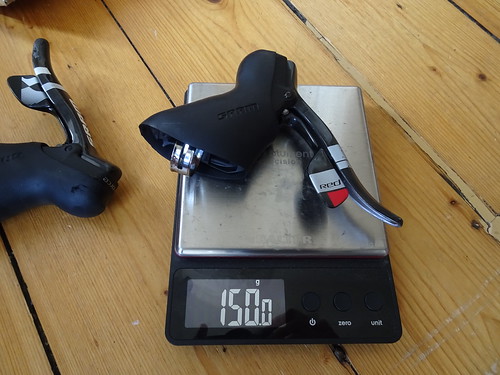 Here are all the bits I consider to be dead weight, maybe the axle for the shift mechanism could be replaced with alloy but the rest I won't mess with: 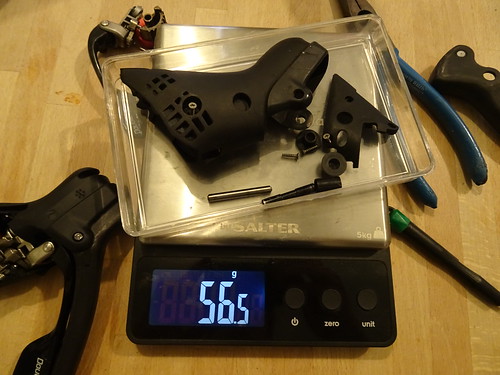 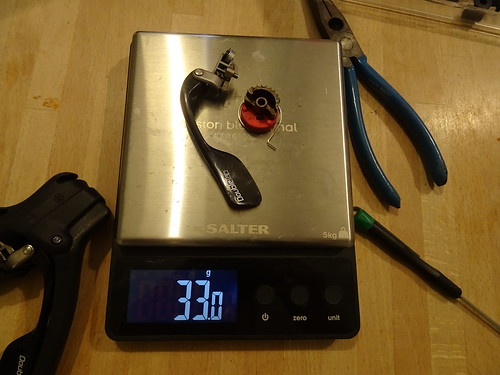 And the brake lever, I didn't weigh it before I sanded it but I'd be surprised if I saved any weight from that: 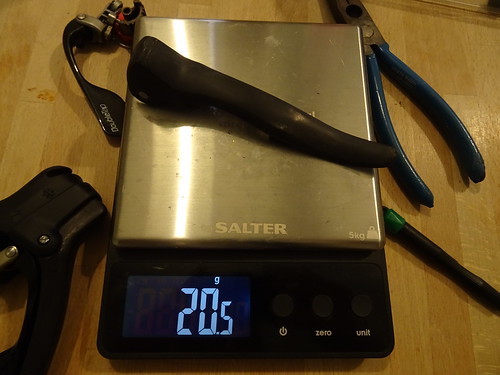 I got a Sram Red rh shifter and a Force lh shifter, at the cost of 10g and money saved 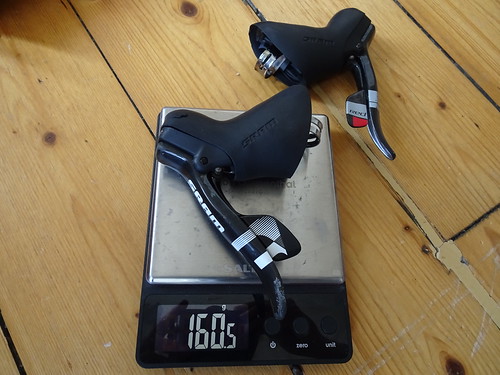 It's a shame all of the weight difference is in the 'dead weight' area: 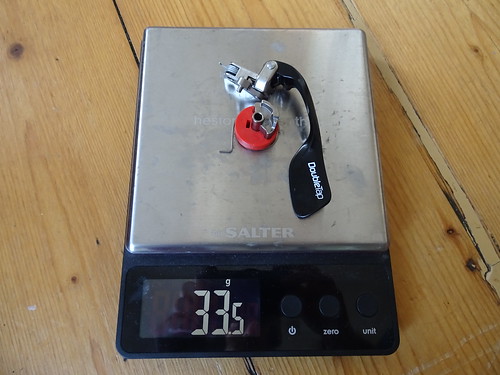 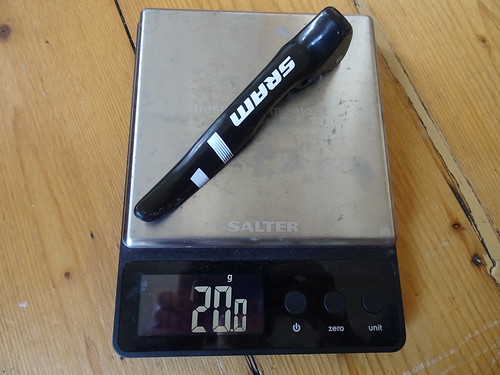 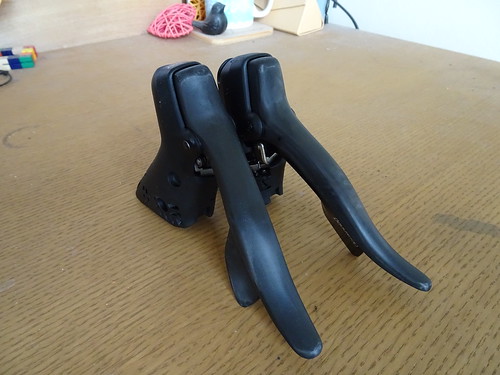 I didn't sand the alloy Force shift paddle becuse I didn't want to completely detach it from the rest of the shift mechanism, which I would have had to do to get it all evenly polished. Nail polish remover and elbow grease wasn't enough to remove the logos either which is annoying. I was a bit worried I wouldn't be able to put it back together again too!

Shifter clamps and hoods are next on the agenda

For the hoods? I'm going to try felt first. But if that doesn't work I'll maybe try the carbon/plastidip strategy, like the chap on the climb blog did, although it might be a bit advanced for me!

Just read through this - great read and a lovely looking bike. Great to see some beautiful mods which don't seem to be bank breaking.

keep up the work, i'll be tuned in to updates

Could it be that the red circle part, with the indexing on it is a bit lighter on the force paddle as it's smaller and a different material as on the sram red paddle ?
--->

Thanks lads, I'm enjoying the build and doing these wee write-ups!


jobvisser wrote: ↑
Wed Oct 16, 2019 9:31 pm
Could it be that the red circle part, with the indexing on it is a bit lighter on the force paddle as it's smaller and a different material as on the sram red paddle ?

I don't think so. It used to be that both the left and right shifters had the same ratchet, just turned a different way (modular design, but adds dead weight) but this version have specific parts which look like they have about the same amount of metal in them

I loved reading this thread and I noticed someone an hour from me has one for sale for $400 AUD. This makes me want it to achieve such a nice budget build like you have!
Top

I say go for it if it's in good condition! IIRC I got my frame and fork for £320, which is $600AUD so that's a pretty good deal you've found yourself there. Just make sure it's not cracked or the paint's in terrible shape before you buy it, but that'll be easy since it's only an hour away.
I wouldn't call my build a 'budget build' as such, in that I'm not setting myself a goal of X weight reduction for Y amount of money. I've just been very patient when it comes to acquiring the right parts for decent prices!

. It took like 15 months but I finally got a 26mm stem to go with those 3T Prima 199 bars.
Deda Newton 120mm - pretty heavy to be honest, but I wasn't going to lighten my wallet too much for an 85g extralite and I couldn't be bothered waiting any longer for a Syntace f99 (~105g) to come up. 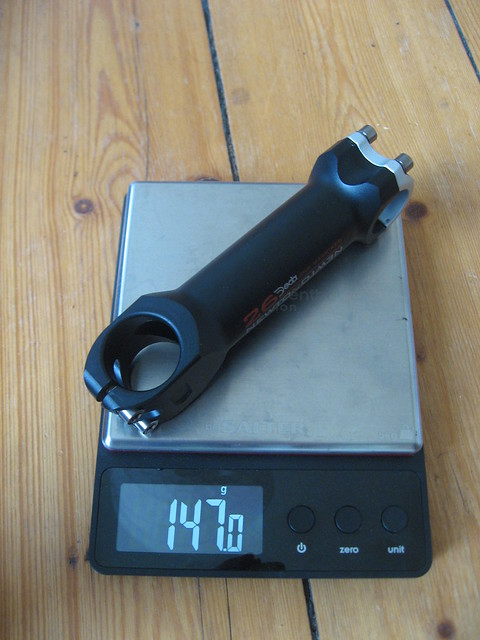 Still really pleased with the bar weight though: 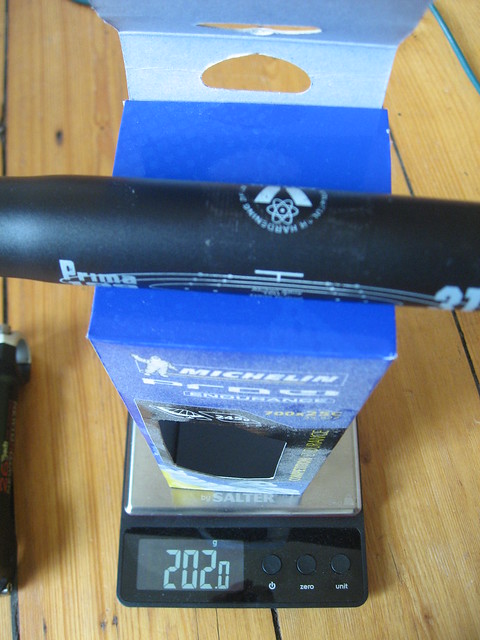 Which brings the total weight to 350g, 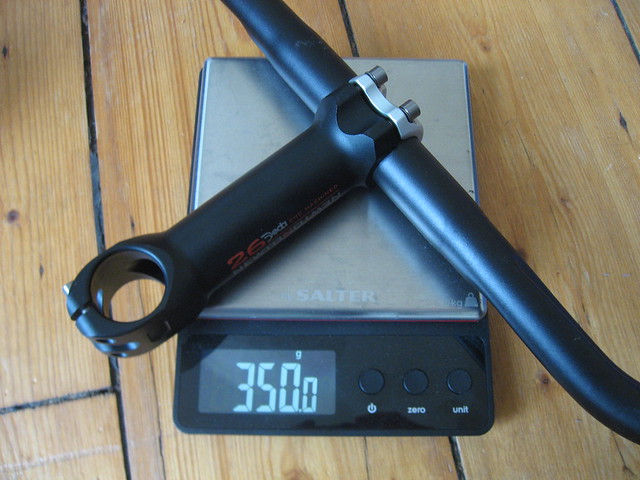 Because the stem is so heavy, that's only a saving of 24g from the current combo, which is a Kalloy Uno (106g) and Ritchey WCS neo-classic (268g), but I reckon it's worth the like £30 total it cost

I haven't made any lighter hoods for the Sram levers yet, and I put them on the winter bike so I'll get round to it in the spring, maybe heat-shrink rather than felt

I broke a spoke on my winter bike's rear wheel (mavic aksium so it's a pain to fix, and the wheel's pretty dead anyway) so I suppose it's summer time now. Might as well spend my coronavirus-induced time off school to build and ride my bikes

I'll post the bike as it is after I actually take it outside, but for now here's the weight savings from getting Fabric cageless bottles. 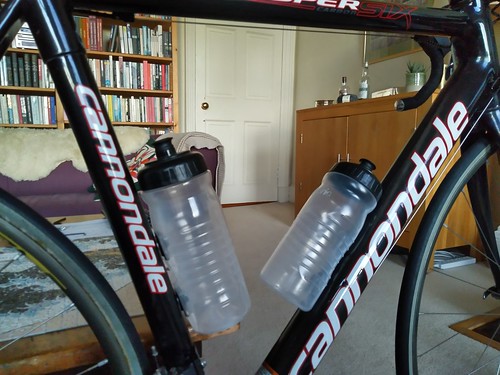 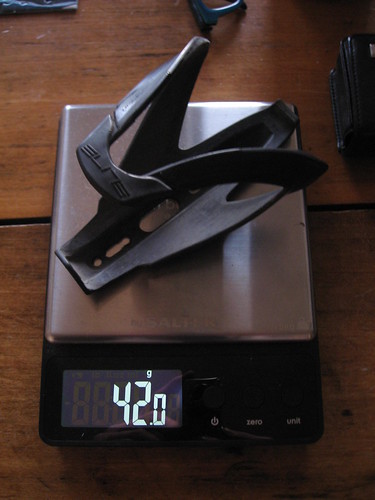 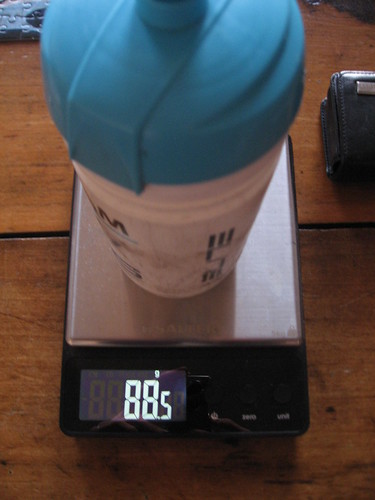 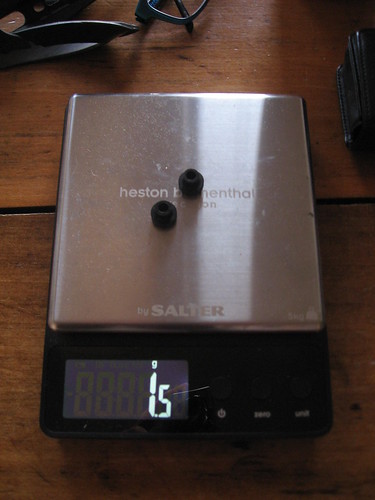 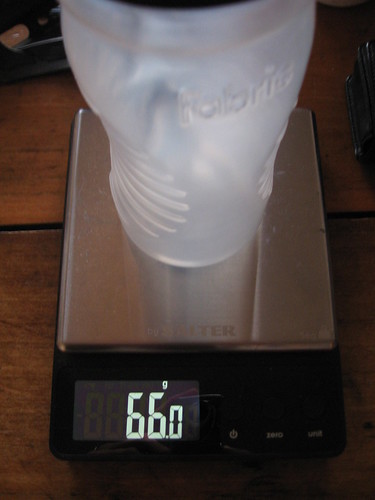 That makes a saving (per bottle) of 63g, x2 is 126g saved. Not bad for such a small item, and definitely cheaper than fancy carbon

) so it was nice and sunny for some photos.
Sitting at 6566g as pictured, plus a bit for tubular glue and grease etc. 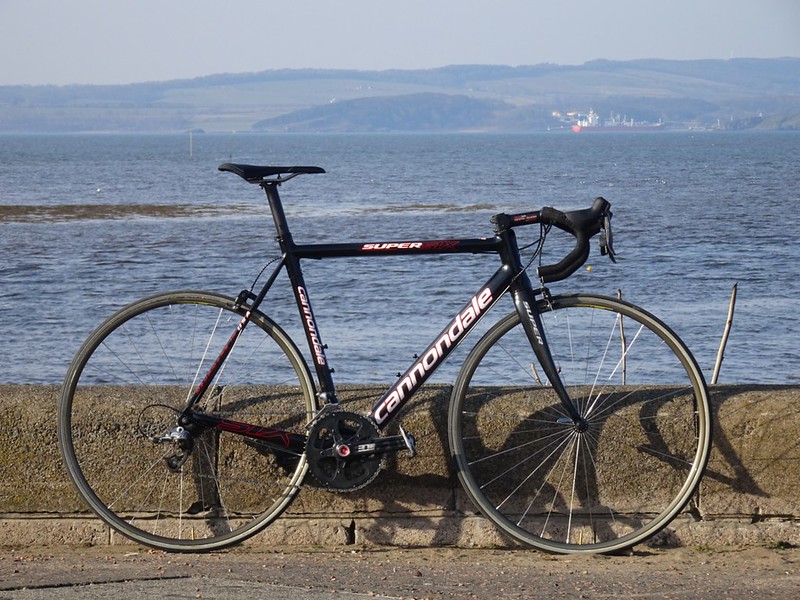 The Sram Force/Red mix (still with the DA7900 FD) has been working beautifully all through winter and continues to do so on this bike, the shifting is so much more crisp that the Shimano 105 5700 I had before, both in terms of the derailleur changing sprockets and the feel of the shifting action. I much prefer double-tap - perfectly intuitive shifting action, and brake lever being fixed and not swinging inwards is nice. 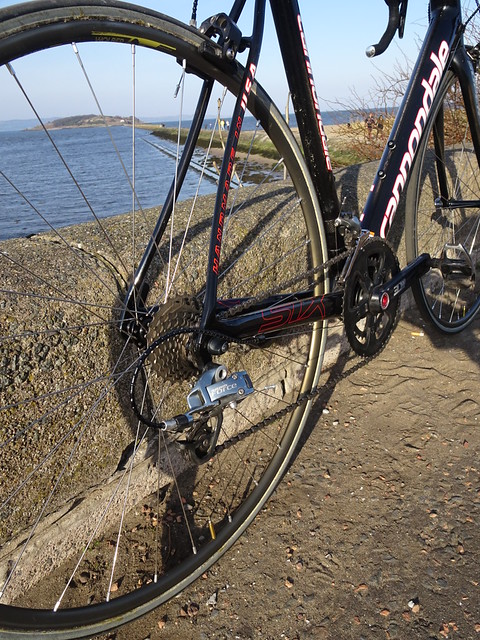 Ciamillo has had a bit of a comeback recently but I don't feel the need to upgrade as these Negative G's are still working beautifully (there's the price tag, too

), as well as being eye-catching on group rides apparently 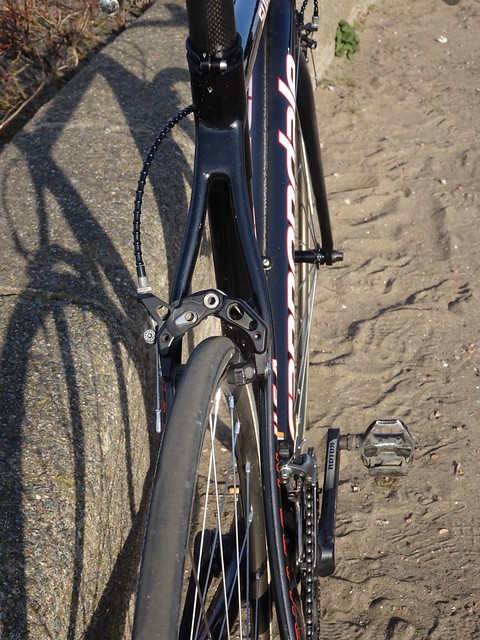 The 3T prima 199 bars have channels for cables on the front and the back, so I decided to make use of them in order to avoid any weirdness with the ultra-thin Tesa bar tape. I thought I'd hate it, but since I always wear gloves it's actually not uncomfortable and I quite like the way the iLinks poke through. 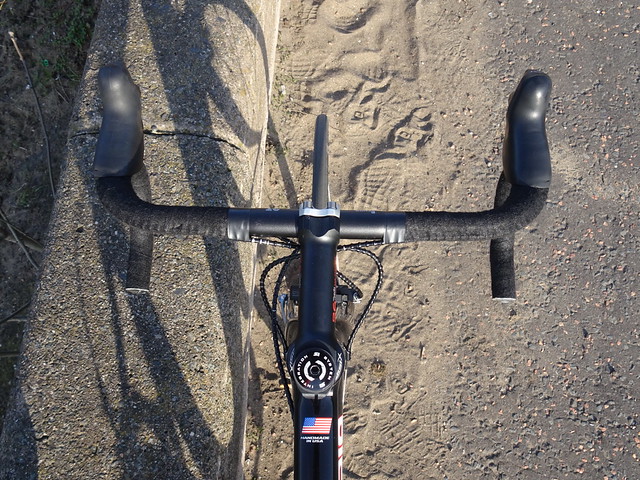 The handling is obviously slightly different with a 120mm stem and slightly longer and lower bars. The combination of the light, responsive wheels and tubular tyres makes for really nice cornering, and the bike swings very easily when riding out of the saddle. 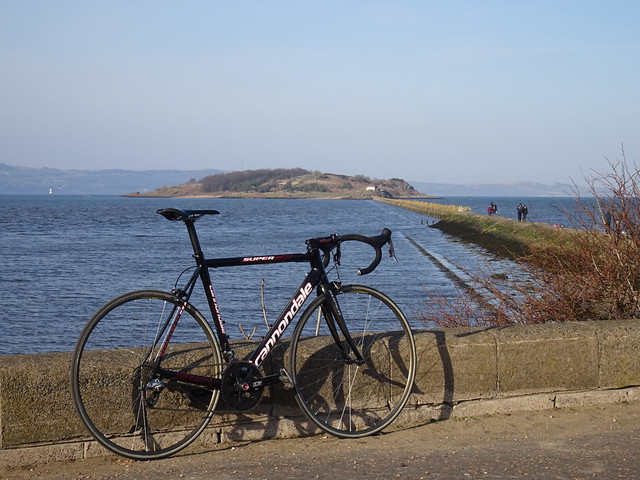 Here's the build list, only the chainrings and pedals left before I'd be on my second round of upgrading from the parts of my B'twin. Dura Ace pedals would save me less than 100g, so maybe I'll make the switch to Look since they're generally a bit lighter. I'm holding off on new chainrings until these ones wear out since they aren't all that heavy and a set of Stronglights is fairly expensive for 25g saved. 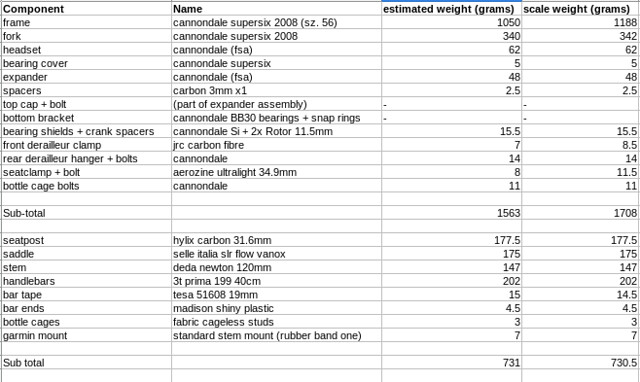 For now I'm just going to ride it 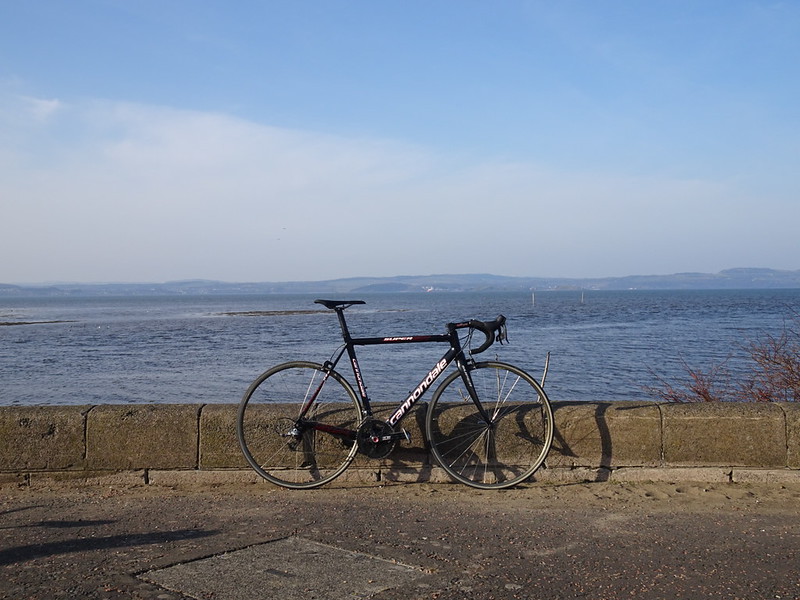 Still one of my favorite builds on this forum! Great stuff, keep it up!
Cannondale Systemsix Ultegra 2020

Hi noticed you still have the stock fsa expander? Am sure they are 50g standard. A cannondale evo si one would save you about 35g.

Well spotted and a good suggestion.
Incidentally, Thomson, did you order the Si expander from Triton?
Top
Post Reply
148 posts