An end cap with a very long 106mm tongue was supplied with my C64. This is used where the cable exits the frame at the end of the chainstay to guide the inner cable around the inside of the drop out . Its made by JagWire but does not exist on the JagWire website or at any online shops. Would this be a special part made specifically for Colnago? Ive just removed it from the frame to find it has a slight kink in it and ideally I'd like to replace it before rebuilding the bike with 12 speed. Any ideas?

You could have a dealer order you a spares kit, it seems one is included, but that seems like a lot of expense just to replace the one (inexpensive) part.

The slight kink doesn't look like it would affect shifting.
Colnago C59
Top

What country are you in wilwil?

No doubt, but if something becomes damaged and can be easily replaced, no harm done.
Top

No doubt, but if something becomes damaged and can be easily replaced, no harm done.

KotP: Yep that's the one. So Trek use them too. WindWave are sending me one. But I might well buy a spare from you. Thanks
Top

You're welcome, but I'm not affiliated with Triton Cycles in any way.

Windwave = U.K, so a lucky guess on my part.
Top

Here's mine, which looks a bit worse than just a kink. Cut right through. I wonder if it's because of the angled routing inside the frame, which is by design, or somehow unlucky installation. 3-4 months of usage. 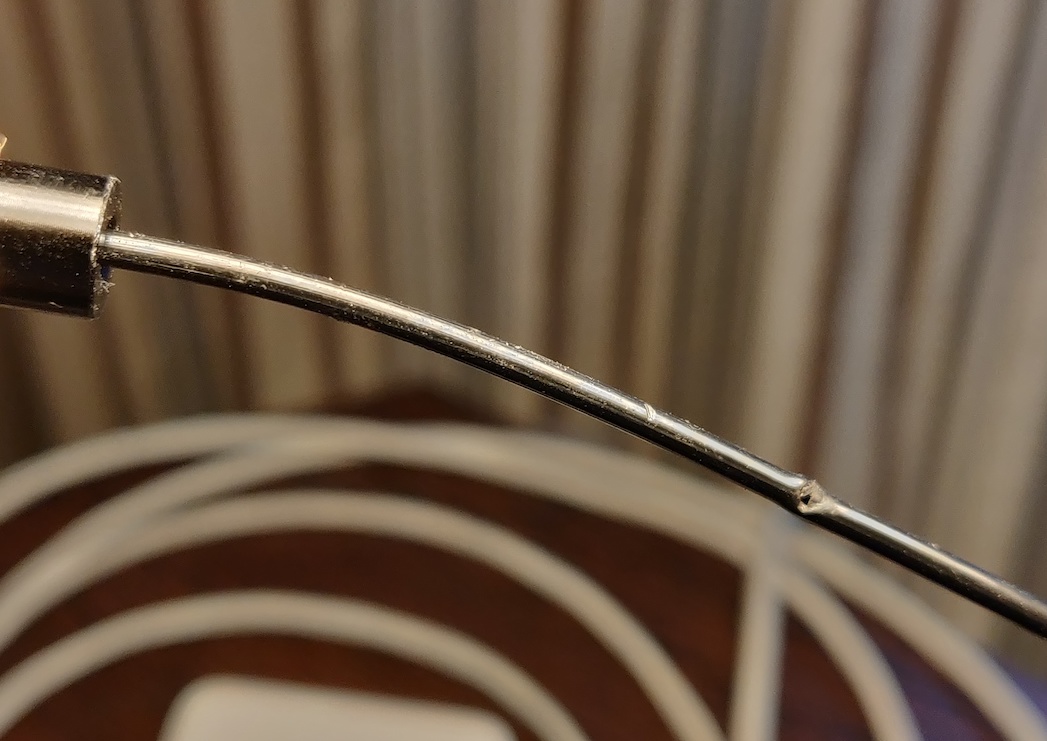 Mine was probably on the way to looking like that. Seems there's a problem routing cables through the rear drop out on C64s.
Top

I really don't like those thin "sheaths" like shown above for the reason shown above. They're just not thick enough to last very long against a hard edge. And similarly, I'm not fond of any hard edges that are present (by design) which cables have to pass over, as is the case with a lot of dropouts these days where the cables must exit out of the end, and usually above the axle. Not a problem for electronic builds but something you need to consider for mechancial builds due to the resulting friction, and possilbe cutting into the carbon internally from the sawing action. For that reason, I wouldn't even use the supplied ferrule with the sheathing in that application. I'd get some much thicker walled PTFE tubing and use it instead. I would cut a piece of that tubing such that it extends from at least around the hard edge as it turns up from the chainstay into droput, all the way through the chainstay, around the molded guide and at least about 10cm up into the downtube from there. The key thing is that you want it covering the internal edge at the dropout. I have some tubing I get from Jaguar now for these kinds of things and the ends of each piece are flared out, so if the exit hole in the cable stop at the rear dropout isn't too large, you can just run it all the way through from there and around BB shell, and let that little flare at the end keep it from moving inside the dropout and working it's way past the hard edge, which would leave the cable free to just keep cutting into the carbon not to mention adding a whole bunch of unwanted friction.

Here's a couple pics showing the thickness of some of the stuff I've used (from my C60 thread)... but this stuff is so thick that I actually had to modify the BB cable guide for it to fit in the guide grooves nicely without actually squeezing against the cable itself. The picture below is just to show a cross section of the tubing, and it provides a nice smooth gentle path to get around the hard edge of hole in the chainstay bridge as the cable makes its way up to the front derialleur.

While the stuff above (same stuff as in the pics below) is awesome where it will fit, I'm now using the liner I got from Jaguar as it's outer diameter is a little smaller but the walls are still a lot thicker than that sheathing you're showing.

And here's a couple pics from when I was playing around with a C64 frameset just to see how all the cable routing would work out etc... I really do love the molded in cable guides... so much cleaner and smoother than bolt on guides, etc... 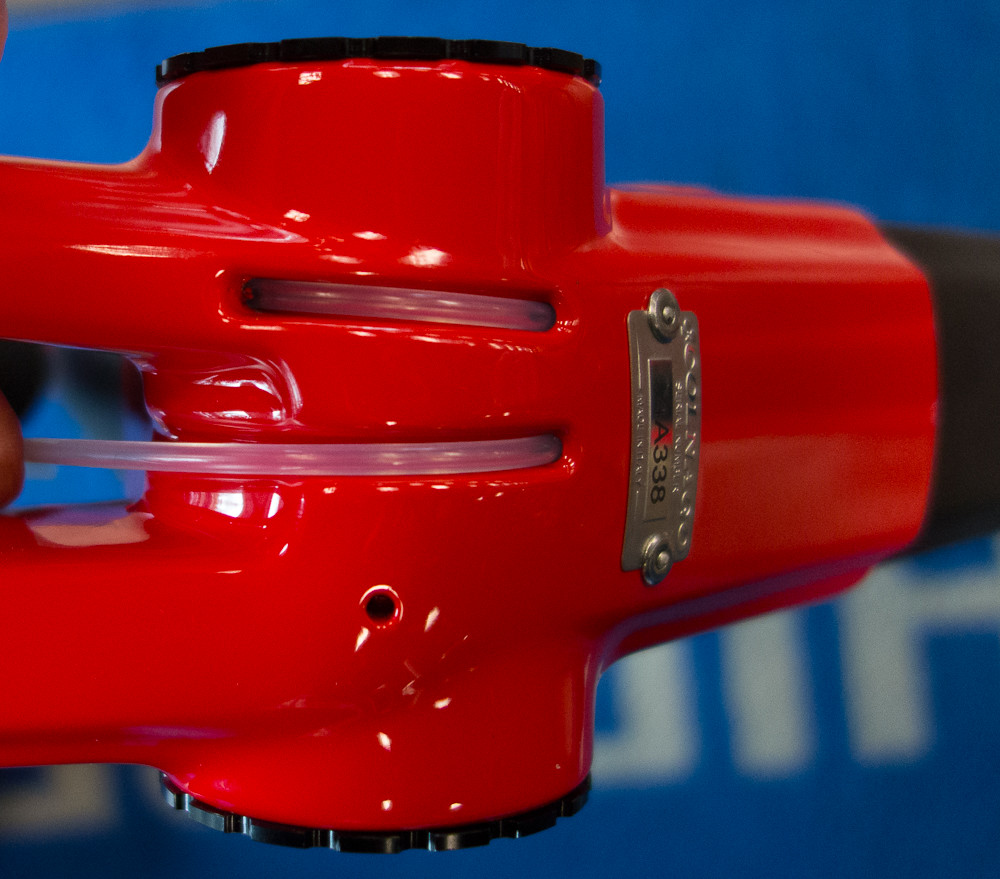 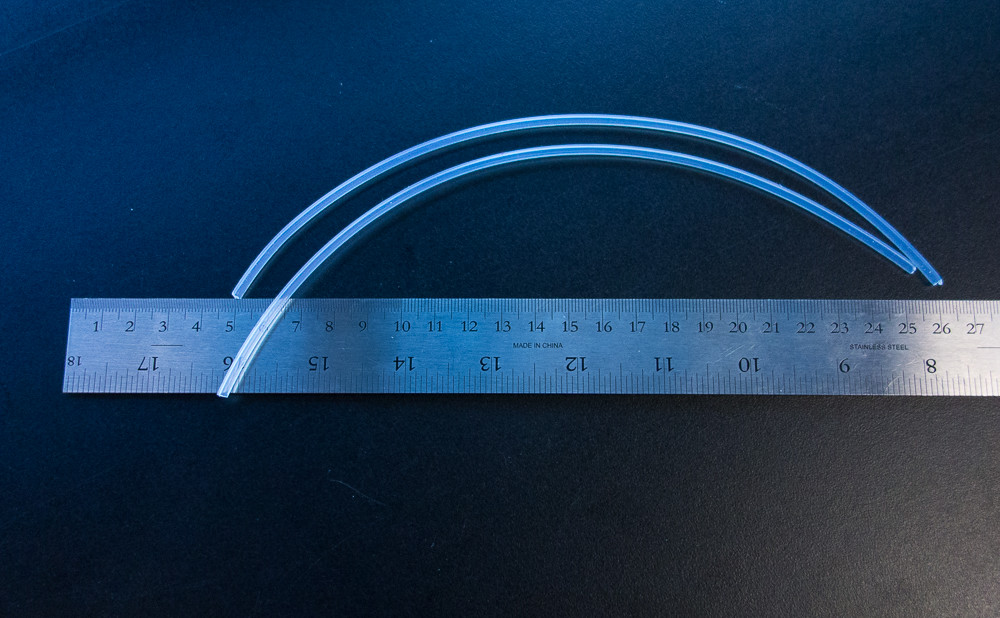 In the pics above I just used enough to get around the BB shell and into each opening, to see how it all fit in, but if I was doing one for real, I'd extend the piece that goes into the chainstay all the way to the opening at the rear of the chainstay, in order to get around the edge of the dropout.
Colnago C64 - The Naked Build; Colnago C60 - PR99; Trek Koppenberg - Where Emonda and Domane Meet;
Unlinked Builds (searchable): Colnago C59 - 5 Years Later; Trek Emonda SL Campagnolo SR; Special Colnago EPQ
Top

I cant find that tubing in the UK. Where/what is Jaguar? I bought other PTFE tubing but the walls are just too thin, plus it creases rally easily. I checked the new long tongue cable end cap after a ride today and it is already starting to wear in the same place. For now I have wrapped some electrical tape round it.
Top

@WilWil: Jaguar is the company that probably makes that sheathing you have in your hands. They do a lot of cable stuff. But there are other companies that sell just PTFE tubing. I remember someone in my C64 thread talking about a Euro company that had all kinds of different dimensioned PTFE tubing. The Jaguar site is: https://jagwire.com/products/small-part ... vice-parts Part no: JSAY000 It's not as thick walled as the stuff I showed in the C64 mockup but that was actually a bit too tight for the holes in BB shell so I'd use something like the above if I was doing it. It's certainly thicker walled than the supplied sheathing, which as you've seen, will not hold up very long if it's the only protection between a moving shift cable and bare hard edge.
Colnago C64 - The Naked Build; Colnago C60 - PR99; Trek Koppenberg - Where Emonda and Domane Meet;
Unlinked Builds (searchable): Colnago C59 - 5 Years Later; Trek Emonda SL Campagnolo SR; Special Colnago EPQ
Top

Then just seatch 'Alligator' or 'Jagwire', the seller has all different thicknesses, cheap as chips, it will take about 2 weeks to arrive from Taiwan.
Top