Ya know... I was going to say something about the focus... but you being a professional and all, I thought you were just in a hurry.
Colnago C64 - The Naked Build; Colnago C60 - PR99; Trek Koppenberg - Where Emonda and Domane Meet;
Unlinked Builds (searchable): Colnago C59 - 5 Years Later; Trek Emonda SL Campagnolo SR; Special Colnago EPQ
Top

I keep coming back to this thread to look at the beautiful bike. How are getting on with things after some extended miles guy?
Top

billspreston wrote: ↑
Wed Apr 25, 2018 11:20 pm
I keep coming back to this thread to look at the beautiful bike. How are getting on with things after some extended miles guy?

Thanks Bill, what a lovely thing to say.

It's stunning. Just stunning (as well it should be). I was a little worried that I'd spend this money and then ride it and think 'it's exactly the same as my old Ultimate CF SLX' - I'm always slightly cynical about reviews that say 'this new model is def 4% stiffer than the old etc'.

I really needn't have done. It's incredibly planted and stable, tracks wonderfully and is without question a better ride. It's hugely stiff in the BB area and not at all twitchy. The Di2 is superb and the Bora's are just gorgeous to ride. I have changed the stem to a 120mm as I felt a little tucked-in. I'm sure that's due to the 3T bars having a shorter reach than the Zipps I ran on the Canyon. Although the bikes have almost identical reach I didn't factor that in enough and a 120mm stem opens the front up just that bit more.
Bikes:

Glad to hear it Guy! Thanks for the input. I got a first hand look at a C64 frameset in the flesh today and it looks even better in person.

Lovely looking bike and strange to see someone so local to me on here! I live in Locks Heath just down the road from Botley and passed through there last night on my evening ride!
Top

Small world! I lived in Titchfield and Titchfield Common and used to work Saturdays at the Locks Heath centre. Grew up all around the Fareham area...
Bikes:

You planning on one down the line? It was the blue Art Decor that stole my attention back in Feb but I went with this colour in the end.
Bikes:

Very small world indeed, are you on Strava? Give me a follow if you search Phil Tighe you should find me.
Top

So, a couple of tweaks over the last few days.

Firstly, a change of stem, and from a 110mm Apto to a 120mm ARX Ltd Stealth carbon. For me the proportions match the frame better now and the Apto looked a little slim when I tried a 120mm version. It felt a little 'tucked in' with the 110mm and that extra with the 120mm has opened it up just the right amount.

Secondly, tyre swap. From 25mm Conti GP4000sII with butyl tubes to Specialized Turbo Cotton 'Hell of the North' 28mm's with latex tubes. The Contis come up big as most people know and measure 26.8mm on the Bora's. The Turbo's run narrower and come up at 27.9mm so almost exactly true to size on these wheels. Weight wise they're 32g heavier per wheel but in terms of performance they're not even close. Supple, smooth and grip like hell. The Conti's don't see which way they went.

Why 28's and not the 26's? I'm convinced that my local county council here in Hampshire have pretty much given up with any pretence of road maintenance. I'm in a rural area and 80% of my riding is on unclassified country lanes, with a few B roads thrown in. UK members will know what that means. The bigger chamber offers a bit more help with the often abysmal surfaces. Also the 28mm's aren't just a bigger version, but instead have a tread that comes further around the sidewall for better protection there, along with an uprated black-belt puncture layer. They were designed around the tubs that Quick-Step and Bora use for the spring classics (Sagan winning P-R on the 28mm tub version).

Plus I think the tan sidewalls look absolutely great. 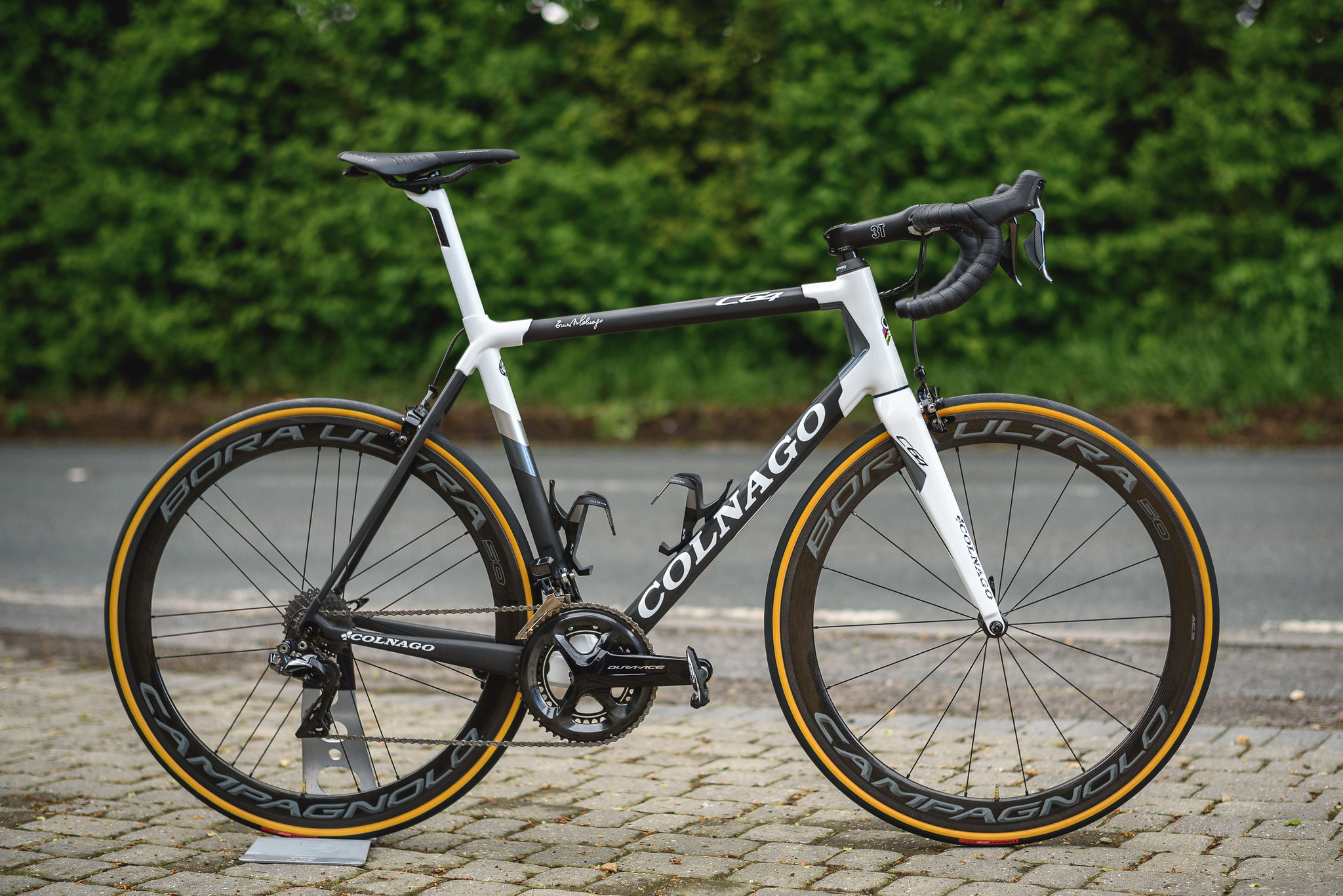 I'd love to see this with dura ace wheels or campag groupset but other than that its near perfect!
2020 Trek Boone
2017 Merida Reacto
2017 Trek Superfly AL
Top

I have a C64 arriving fairly soon, and a lot of my choices are similar to yours. It is the same size too. I absolutely hear you on the state of the roads, I am not far from you in Surrey. It's sometimes difficult to get into a decent rhythm because the roads are so bad you end up crashing into a huge pothole.
Top