The comfort of narrow handlebars.

xav wrote: ↑
Mon Apr 19, 2021 11:33 am
I've put some 36cm Liv handlebars on a 3T Strada with the levers bent in slightly, narrow but you do get used to it and I run narrower on the track. Use the bike for road bike TTs as well as fast group rides. 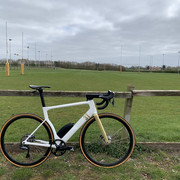 We did some aero testing recently on banned positions, as well as bending the levers in etc., there are improvements from narrower bars but how you hold them is of course more important:

Is that a Giant Stealth stem?
Any issue with fitment? Have you had to do any modification?
Top

Q for XAV...Are the advantages of aero bar positions consistent with the position to generate optimal/maximal power? IIRC, engaging glutes occurs at back angles greater than 40 degrees? What are the biggest trade-offs we should be keeping in mind?
Top

one60 wrote: ↑
Fri Apr 23, 2021 5:41 am
Q for XAV...Are the advantages of aero bar positions consistent with the position to generate optimal/maximal power? IIRC, engaging glutes occurs at back angles greater than 40 degrees? What are the biggest trade-offs we should be keeping in mind?

This study (which is highly cited) indicates that 50-75% produces greatest power. This has to be carefully considered with aerodynamic drag, however.

Also, many other factors and variables, such as knee and ankle angles. Not to mention, adaptations necessary to maintain aggressive hip angles.

Also, this is part of the reason why pros generally want to (but aren't allowed to anymore thanks UCI) tilt their saddle noses way down. This lets them achieve highly aerodynamic positions, while mitigating somewhat the "excessive" hip angles closer to the "more optimal" power ranges by reducing the hip angle (saddle nose up increases hip angle, saddle nose down decreases hip angle).

Generally on a bike, the lower you can get, the better, when factoring in aero. You may lose some power at say 100 degrees, but you can get more speed per watt due to lower drag.
Bianchi Oltre XR4
Celeste Matte
Campy SR 11spd mechanical
Bora Ultra 50 tubs
Viseon 5D / stock bits and parts

CustomMetal wrote: ↑
Tue Apr 20, 2021 4:10 pm
Hi Xav, Tom Sturdy is building me something special.. if you DM me a number (can't find one on your website) I'd love to discuss... however it won't be finished for Mid May, but your road bike series was one of the main reasons for the commission!

Plenty of time for the rest of the season, I heard a rumour there'll be an official road bike champs that the CTT are running but no more than a rumour so far. Maybe one of the classic series.

It's a Contact Aero stem off a Propel yes. In order to get the Liv handlebars to fit (they're smaller than the normal Contact Aero handlebars) I had to manufacture a shim to go in the stem. Inside the stem is a JC41 and both hydraulic cables, one of which goes down into the steerer tube for the front brake - I modified the top cap and expander plug to allow it - and filled in the external hole on the fork and painted it over. The rear hydraulic hose goes out the back of the stem and I cut a slot out to give it space for when the bars turn. I might do a thread in the bike section on here detailing how I've done it if that would be helpful.


one60 wrote: ↑
Fri Apr 23, 2021 5:41 am
Q for XAV...Are the advantages of aero bar positions consistent with the position to generate optimal/maximal power? IIRC, engaging glutes occurs at back angles greater than 40 degrees? What are the biggest trade-offs we should be keeping in mind?

For road cycling aero wins, the differences for most riders between a very upright position (eg. tops) and an aero position are <10% in terms of aerobic power output but the aero differences are always way more. Comfort is the big one though - I have back issues from a young age so can't hold a dramatic position for too long and have to pick and choose where to do it. Over time we will see riders choosing breakaway bikes in pro races for specific days, with special setups, and then back to normal bikes for regular days.
AeroCoach UK
www.aero-coach.co.uk
Top
Post Reply
169 posts