Cannondale Slate - anybody else excited?

I would get this bike but I am nervous about the sizing. I am 6'5.5". The XL seems to stack up well against the FSI carbon 3 mtb I have. The stand over heights are the only thing I can see that is ~5cm shorter, else all looks like it just fits in there.
Top

Jimmy, small world indeed. I'm sure we've crossed paths a few times. Expecting the bike any day. I'll have to immediately swap cranks and possibly a new chainring but it shouldn't set me back much in terms of time. I'll reach out to you once I'm good to go. My coworker did the Palm Springs century over the weekend and saw a Slate there. That's awesome

EJJ71, that's too bad about the standover height. You might have a good deal of seatpost sticking out of the frame? What's your usual saddle height? Hopefully your LBS will stock an XL Slate soon so you can mock it up to see if it'll work. I wish they stuck with the classic/horizontal top tube like we saw with the white prototypes (i.e. Radavist review, etc.). For my height I run a high saddle height and having to run the Large size instead of medium.

Had some Slates arrive.
My assembly line is cranking. 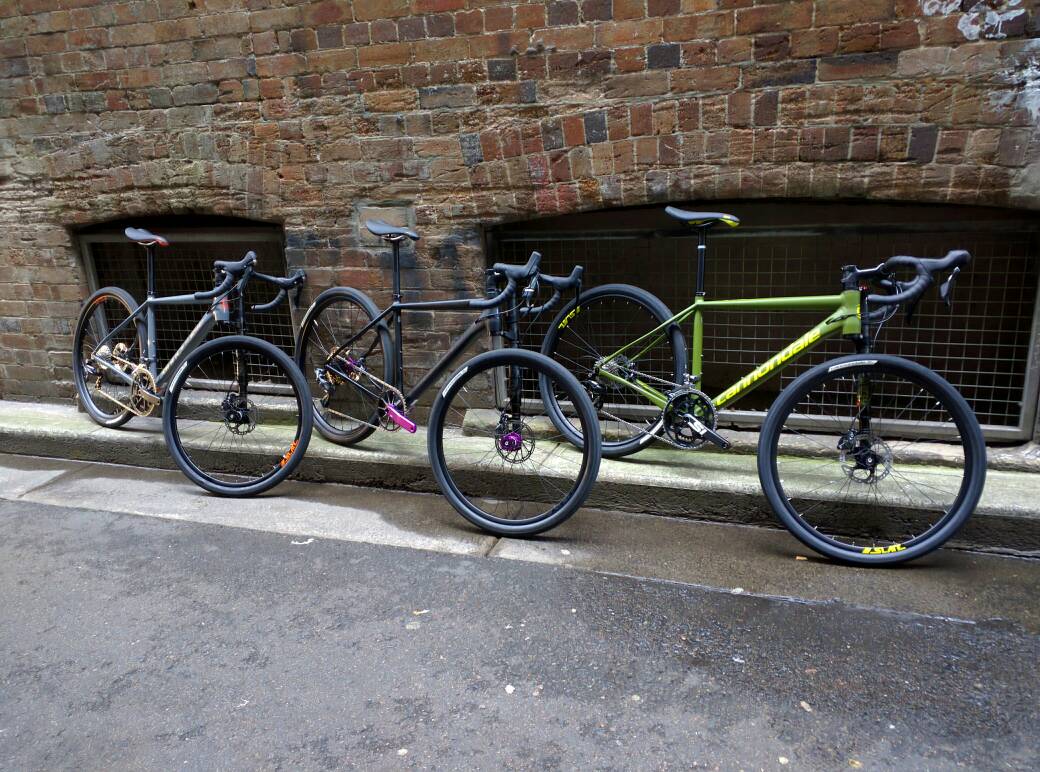 My Slate CX1 size Large arrived yesterday. Just thought I'd share with those interested on my first impressions (have not ridden it, just equipment, etc.) Immediately weighed it at 20 lbs 6 ounces (~20.38 lbs). Front rotor was not mounted but i hung it on the handlebar. Didn't have rotor bolts on there but there were a few decals and also that plastic spoke guard...so I'd say the weight is pretty close to accurate (by Park DS-1 scale standards) It's a size Large and my saddle height is usually around 78.75cm from center of BB with 172.5mm crank arms. The Large Slate comes with 175mm crank arms but I put the saddle at the 78.75cm height for the incoming crank arms to see how much seatpost extension I have. Yikes. I can't believe i almost neeed a XL frame! Booo for compact/sloping TTs Regarding weight, I was pleasantly surprised to weigh it at 20 lbs 6 ounces. I'm trying to order a Carbon-Ti X-Lock X12 thru axle for the rear to tidy it up and shave some weight. This is the part I'm hoping to acquire but in black: http://www.carbon-ti.com/products/axles-and-quick-releases/x-lock-12-mm-rear/x-lock-x-12. Here's the Slate's OEM QR 12x142 axle.. I still have yet to weigh it but hope to do so by tonight. FYI, it appears to be 161mm in length, 12x1.0 thread pitch and 15mm of thread length. The Syntace axle would be the best bang for the buck but the Carbon-Ti gets it down even lighter..but not too light Carbon-Ti has a nice seatpost clamp which I would want to get to compliment the X-12 rear axle. I think it's a 31.8mm seatclamp, will measure tonight to be safe. I'll also be replacing the rear hydraulic hose to get rid of that connectamajig fitting... I cannot stand that rattling around or even the look of it. I'm unfortunately OCD about this stuff. I have a new hose on order and will also be shortening and re-routing the front hose a great deal. I don't like how they route it down the front of the Lefty leg. I'm considering shooting it through the gap between the fork crowns and head tubes. Perhaps risky in case it got pinched between the frame and rubber bumper. I think the biggest weight savings will be converting to tubeless. Perhaps ~100g per wheel? The shorter crank arms may shed a tiny bit of weight as well. Of course, all these little bits of weight savings will be immediately offset when I attach the 110bcd spider and QX1 Q-Ring onto the crank, lol. I

I think these Slates are so cool. Can't wait to finish it and ride it.

Hello everyone，I am new to here，attracted by this Slate forum. I am going to buy a small size Slate, but I am not sure to buy the force cx1 model or the shimano 105 model. Does anyone know is it possible to install shimano Di2 on Slate? If it is possible, then I will buy the shimano 105 model and install the hydraulic Di2. Looking for your suggestion, thank you.
Top

Great minds think alike Terry.
I'm going to get the same through axle. I have Enve bars & post on the way.
Getting rid of the connectamajig as well. When replacing the rear hose run it through foam tube to prevent it bouncing around inside the down tube.

From the Slates I have built running Di2 should not be a problem. There are 2 ports on each side of the down tube. One for a hydro hose, the other is a cable stop.
A quick drill out of one of the stops & shrink wrapping the cables together & you will have a really clean build.
Top

Thank you Pottsy. How about the seatpost battery cable? Is it able to go through the bottom bracket? I don't want to use external battery^_^
Top

Built another Slate today.
Large 105 model. Weighed in at 9.8kg.

To further touch on Di2 compatibility, the mechanical cable stops have a slot in them so there will be no drilling required.
There are plenty of holes in the BB to route the Di2 cables where they need to go. 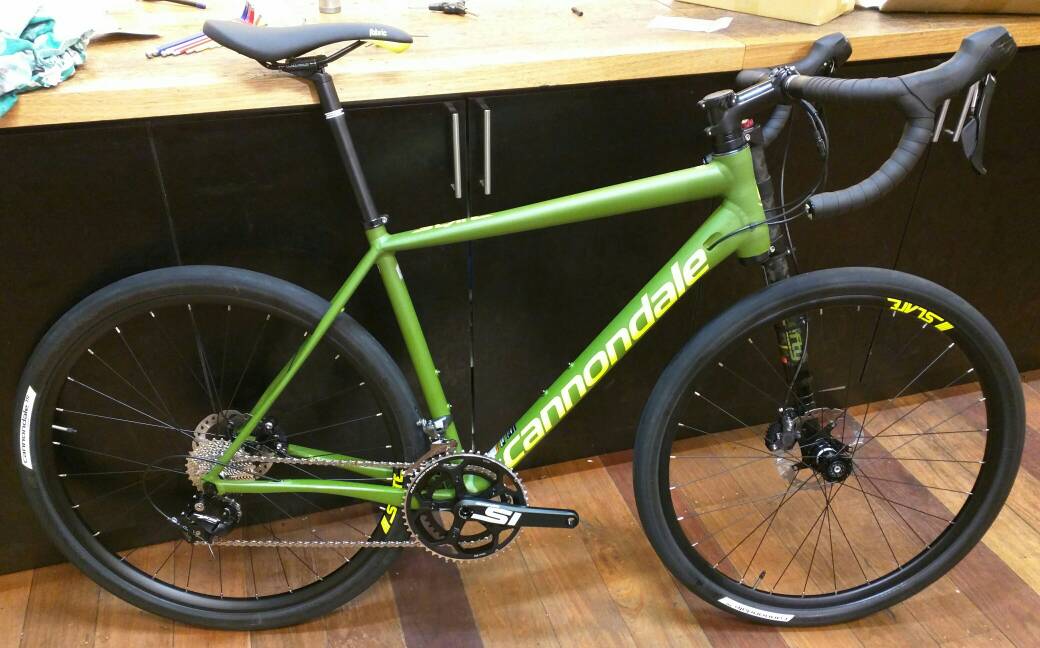 So I played it safe and didn't order the Carbon-Ti 31.8 seat collar. Just replaced the bolt in the stock collar with a Ti one. Also did that with the 4 front caliper bolts. The 2 rear (flat mount caliper) bolts are a bit longer, I want to say 30mm. They are also smooth bore to a point. Anyway. I weighed them and they are actually pretty light for their length.. I didn't have a chance to look more closely to confirm if they were Ti though.

Did you have to order the replacement hydraulic hose through SRAM direct? That's what I had to do. Also, they sent me the standard Road hydraulic disc brake hose kit, not the Flat Mount caliper version. The latter hose kit apparently isn't available for a long time and they're not sure the standard hose will work. I've never removed a hydraulic hose from one of these new SRAM Flat mount calipers, but knowing SRAM the fittings should be the same.

Received the 172.5mm crank arms. Couldn't get them in purple, in fact received SiSL2 crank arms. They're ~35 grams lighter each arm. Granted they are 2.5mm shorter, but I think the weight savings is primarily due to the extra machining of the SiSL2 arms. Regardless, pleasant surprise.

Pottsy, I take it you've got the Black CX1 model as well. Which size? Man, I feel a lot of camaraderie with my fellow Slate riders here. It would be awesome to put together a peleton and crash some group road & mtb rides... All in one ride of course

Here are some weights/dimensions I've recorded while I've been removing some of the original equipment. I'm an idiot and should have weighed the wheelset when I had the tires/tubes/rotors/cassette off.. Completely forgot:

Thanks to Pottsy again!
Top

I just ordered road hydro hoses. It's the fitting at the lever which is the important part.

Still a standard barb & olive at the caliper.

Just be weary when it comes time to bleed the flat mount brake. I have run into an issue with the bleed kit coming into the contact with the caliper & not threading in all the way. Couldn't create a vacuum to bleed the brake properly.

I have only now had the time to shave down the bleed fitting & make it work. You will most likely have to do this too.

I got a Medium Cx1. Haven't had the chance to build mine up yet. Had to get all the customers done first. Should be good for this weekend though.


It hits the side & can't thread in any further. 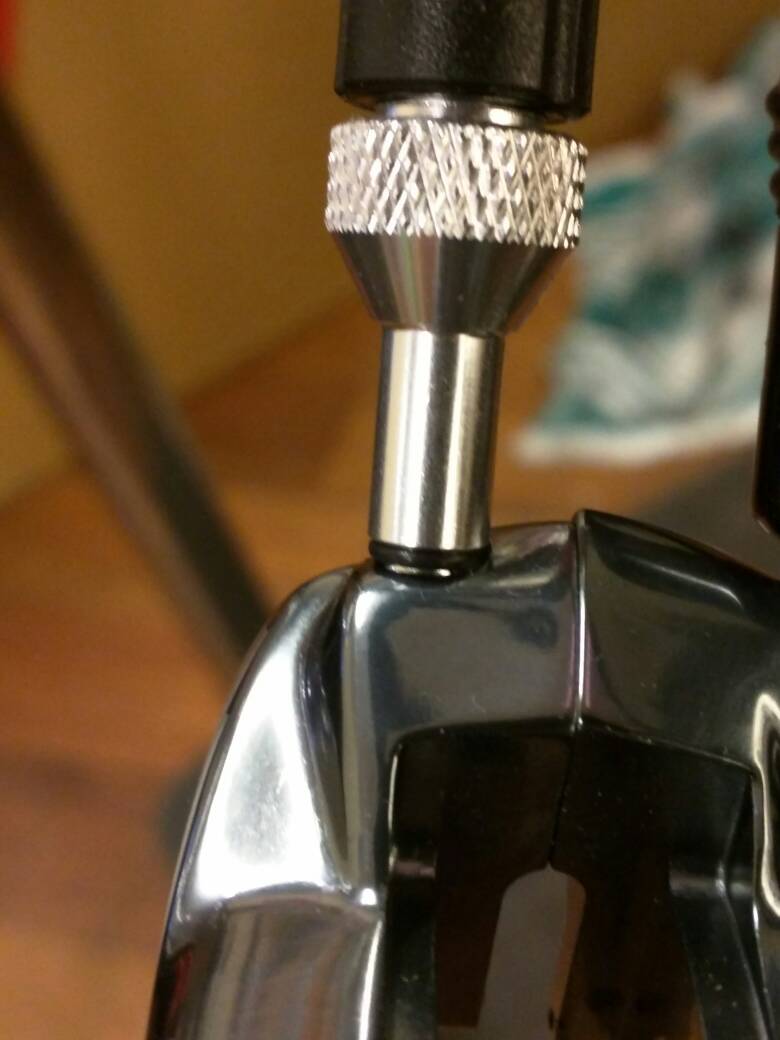 After I shaved down the lip. 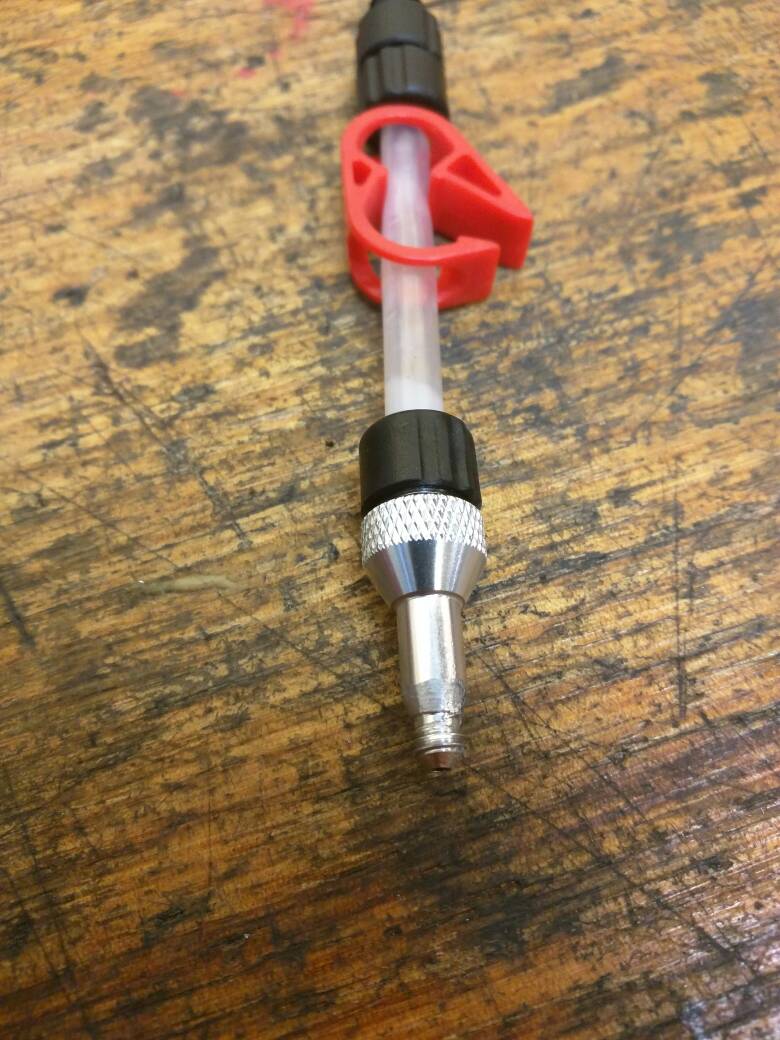 Dude, Pottsy, that's most helpful, thanks. At first glance that looks like a slightly different bleed fitting from my Avid bleed kit (...bought it way back when during the Juicy era during my bike shop days): https://www.sram.com/avid/products/disc-brake-bleed-kit

Where abouts are you located?

No worries Terry. It's the latest bleed kit from Sram.

I am in Sydney, Australia.