Thanks yet again Angry Legs!

As far as power2max goes, I've been reading, and they get good reviews.
I could get a P2M system with Rotor 3D+ Crank and rings for around £1150 delivered!

I say 7900, as I already have some fairly good AL wheels.
But they aren't 11spd compatible I think (Giant P-SLR1's)

I'd recommend Power2Max on Rotor 3d+ cranks. The Power2Max works extremely well in my experience and price is good compared to the competition. 3D+ is as future proof as a crankset can be (BSA, BB30 etc) but Power2max do offer many different cranksets, so the choice is yours.

I wouldn't go back to using Powertaps, although I don't have a bad word to say about them.

And my own thoughts, which includes some stuff about the purchase process:

Again, from your threads, you seem new to cycling so before putting the cart before the horse how about making sure you have some budget set aside for getting a coach.

A power meter (and a bling groppo) won't do as much good as what getting a coach will. Plus, if starting out racing, you will crash. No two ways about it. Scratched up DA parts will start to look like Ultagra before long, so why not use that price differential more productively.
VeloKicks
The Gram
BlackSheep Baum racin
Top

Stoo wrote:This is more confusing than I first thought it may be!

That's the fun of it!

I like the Power2Max on 3D+ cranks direction. Far better for you than PT in the long run. I've no experience with Power2Max, so defer to TimW's experience there. They're cheaper than other options, so you can do a little more in other areas of the build, which is always a bonus!

Tinea Pedis raises some good points too: a power meter brings all sorts of things along with it. Nothing will aid your training more, but there is a learning curve. I'd minimally suggest Training and Racing With a Power Meter. A solid read. You'll want a decent ANT+ head unit. I really like the Garmin 500 with the speed/cadence sensor. You'll then need software. I use Golden Cheetah along with some things I made in Excel. Finally, no two ways about it, it would be even better to have a coach. Another expense there. You can plot out your training plan and intervals, but nothing beats the experience and objectivity of a coach. And sure, you'll crash too if you race. It's a rite of passage, really, but it'll set you or your bike back on occasion. Just par for the course. Things to consider.

My ranking:
1. best value: used powertap. I have a used powertap and while I question the accuracy or precision of used powertaps, it does what I need it to do, and there are advantages to measure @ the hub, for example immunity from inertial artifacts (cadence variation during a pedal stroke, also time sampling decimation/duplication)
2. SRAM/Quarq: this is a solid, proven design with low mass

Garmin Vector is looming (beta units in the field, firmware updates) and I like it for the L-R balance, so if you want Look pedals, it's a near-future option, barring surprises.
http://djconnel.blogspot.com/
Fuji SL/1
Top

Keep in mind this is an internet forum and all of these posts are individual opinions and people recommend what they know/like/have. With that in mind I really have to question why people recommend hub based power these days? If budget is a concern and you race why would you ever buy a powertap over crank-based power which is the same price? Power2max has a proven track record it's just that many people don't know much about it.

Unless you are training and racing on the same wheels every day year round (which is probably a bad call) hub based power is a poor decision. It was great when I had one 10 years ago as the only alternative then was SRM but these days I don't see how powertap stays in business for long...
Top

petepeterson wrote:Keep in mind this is an internet forum and all of these posts are individual opinions and people recommend what they know/like/have.

As alternatively basing it off other people's experiences or what we have read in manuals and marketing blurbs?

Of course it's from our experiences and opinion - it's what is known as 'expert opinion' (though what qualifies as expert may vary somewhat).

petepeterson wrote:Unless you are training and racing on the same wheels every day year round (which is probably a bad call) hub based power is a poor decision. It was great when I had one 10 years ago as the only alternative then was SRM but these days I don't see how powertap stays in business for long...

While crank based, pound for pound, has been accepted as being superior - that does not mean there's still not a place for Powertap. Especially the G4 hub. Friend has one, built up in a training wheelset, for a great weight and is a very solid wheel.
VeloKicks
The Gram
BlackSheep Baum racin
Top

I don't race much, but when I do, I've found I do better not looking @ power data anyway. For post-analysis, it would be nice, though.

For double centuries, I use power for pacing, and then I live with the extra mass.

Hub-based power would be my preference if I used oval chainrings and definitely if I was interested in comparing the effect of swapping chainrings. Perhaps Power2Max is better than SRM or Quarq for this; I'm not sure.

In any case, racing and training on the same wheel isn't that big a deal in many cases. Since a used Powertap can be sold for close to what was paid for it, having two for that matter isn't that expensive.

I'm on very similar stage of the PM experience, looking for to acquire one.
I decided to go for crank based PM, even didn't consider hub based option for practicality, riding 2 wheelsets plus turbo trainer.

I definitely would like to stay with Rotor 3D+ and Qrings, which as far as I'm concerned takes the Quark option out of the equation, no option for 3D+.
SRM seems to be no go for Qrings, please correct me if I'm wrong.
So the choice comes to the Power2Max and Rotor's PM, which seems to be quite unknown territory. On top of this availability the end of Aug.
Rotor is pretty light, only about 90g more, including batteries, comparing to the 110 3D+ 172.5 500g with spider.
Price wise P2M is a winner here.
The prices quoted on their web include crank arms. Can you buy the unit only, without the arms? That would make the purchase even more attractive.
How does this PM perform with Qrings?
Is anybody here who had an experience with both P2M and Rotor PM... and Qrings?
Cervelo S5
Cervelo R5 VWD 5637g/12.43lb
Pronghorn XC SW Race 8284g/18.26lb
Top

petepeterson wrote:If budget is a concern and you race why would you ever buy a powertap over crank-based power which is the same price?

AFAIK the only crank based power meter with a Q-factor below 146 is the SRM Campagnolo, which certainly isn't a good choice "if budget is a concern".
And then there might be people who just don't want to replace their nice Campagnolo crankset...
Top

@1415chris FWIW my teammate is on a P2M w/ Qrings and has nothing but good to say.

@claus I'm with you on your points as I am on campa but does that warrant riding one wheel for every significant training ride and race?
Top 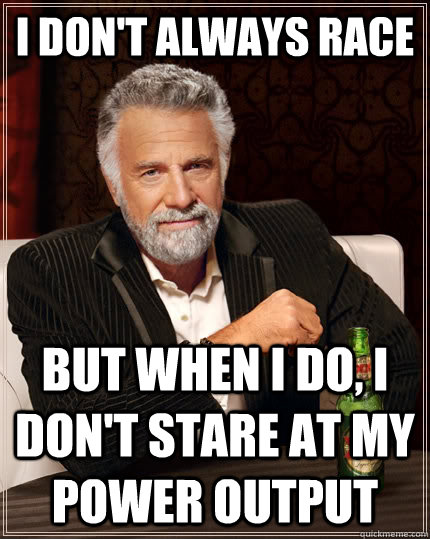 My reasoning behind choosing a hub-based power meter is that:
1. I will probably not look at power data during a race, so I want to be able to change to the lightest setup I can = remove powertap whell and use lighter wheels.
2. For training, which is where I will look at the PM, a couple hundred extra grams is no big deal.

3. I can use the same Powertap wheel in multiple bikes.

In spite of the above logic, I also do find myself wanting to look at power during races or analysis afterwards, in which case a crank-based meter would be good. So I am considering a Quarq. Then I could use lighter wheels but have the extra weight on the bike at all times.

There are tradeoffs, pros/cons for each.

[s]I just don't trust the P2M system. It might be a remarkably good "estimate", but it can't possibly be really accurate.[/s]
EDIT: I was thinking of the wrong unit. P2M might be OK, I just don't know much about them at all.
Top

I had the opportunity to take apart a power tap SL (wired) this past winter. A friend gave me the power tap to see if it was fixable. He bought it used, laced to a zipp 303 tubular wheel and did not want to spend that additional 350$ plus shipping. The power tap was out of warranty and the worst case scenario was that it would become an expensive cyclo-computer.
He was told by Saris that the strain gauges will likely need to be replaced.
I checked the obvious such as the batteries and zeroing out the unit. The value returned for watts during the self test was 354. It would not return any watt values while it was running on the bike.
Possibly the unit had been run in the rain and there was a possibility that water had gotten in the unit.
After I took it apart all the wires to the strain gauges were OK except the for the cable that went to the transmission board.
The board had come loose and the connection to the main board was frayed.
After re-soldering the cable the unit did respond with all the data except for the watts. To do the soldering job you would need a scope to magnify the board and connections.
So it then became an expensive cyclo computer.

Anyway he would be able to at least sell the zipp 303 tubular wheel and tire.

I would not recommend power tap at all only if they would give it to me for free.

If anyone wants pics I'll forward them. I do not see an attachment option here.
I never took drugs to improve my performance at any time. I will be willing to stick my finger into a polygraph test if anyone with big media pull wants to take issue. If you buy a signed poster now it will not be tarnished later. --Graeme Obree
Top
Post Reply
98 posts