Back by popular demand, the general all-things Road forum!

Aight, this ain't an ad, but kinda is at the same time lol. For class, we're doing Kickstarter campaigns, and I ended up doing a second edition of my bike parts pizza cutter, fondly referred to as the "rotory" cutter (Link in signature).

What is it? It's an ultra-premium bespoke pizza cutter made almost entirely out of bike parts (with the exception of the handle being a custom machined piece).

Will be posting regular updates to this thread here The handle needs a safety guard. The vents just make it hard to clean. Look at any pizza cutter and you’ll find they have solid cutting wheels and finger guards.
Top

Ultra-premium? Not quite. More like premium. You'll need to use Absolute black titanium rotors for the ultra-premium version

Those won't rust, either. Although, this would look great in the kitchen next to Campy's Big Corkscrew

Joking aside, I like it. I have no issue with the vents, but the safety guard could be a good idea.

Just continue using the Park tool one. I bought 30 years ago. 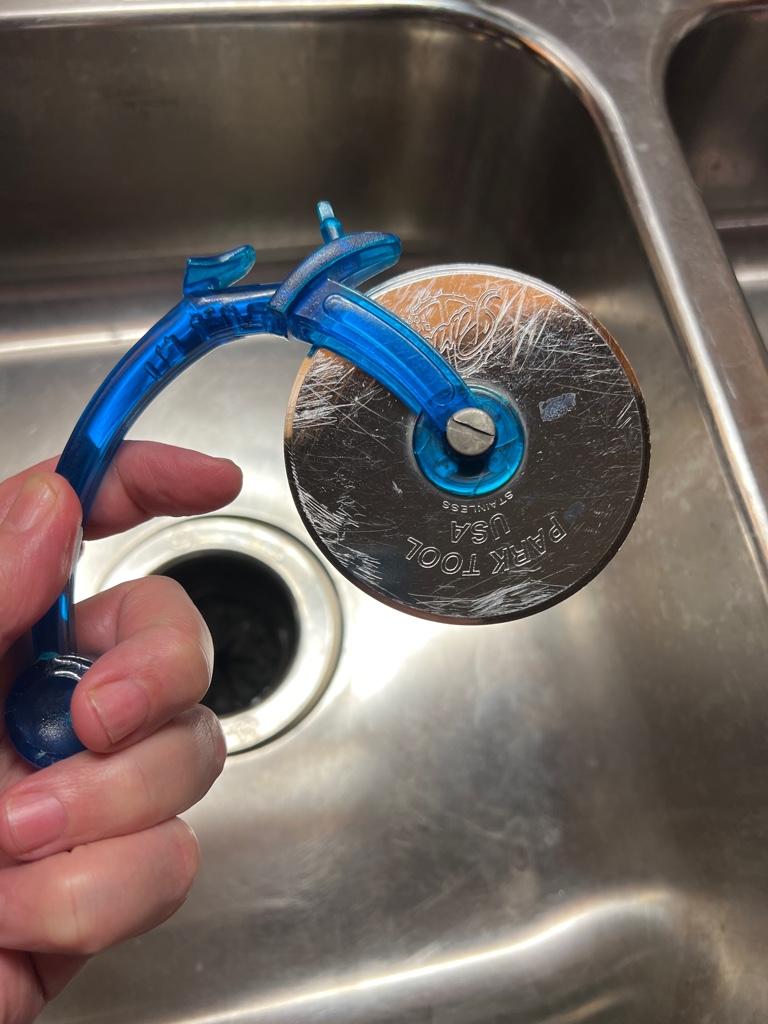 So when I was creating version 1, one of the things I really wanted to do, but ultimately decided against, was making the handle resemble an actual bike fork (see bottom right of ideation image 1) 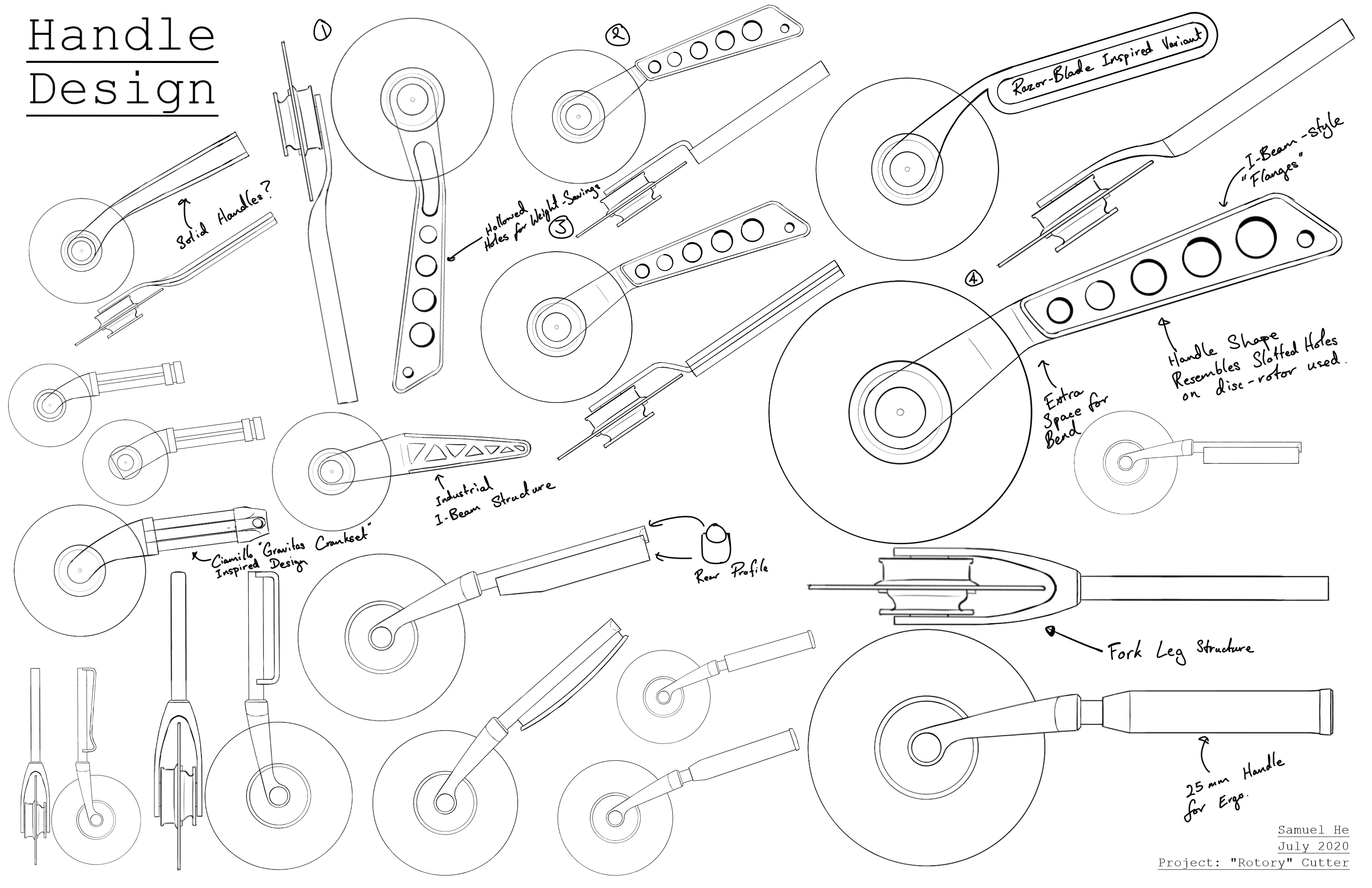 It was challenging for various reasons.
1: V1 was a one-off, so proper molds for carbon fiber would've been quite expensive.

2: Getting the two sides perfectly symmetrical is of utmost importance. It's a premium product, so it should be as perfect as possible, but it also has to do with centering the blade. Asymmetrical legs would get you a crooked blade which was a big no-no for me.

3: I could 3D print a mandrel out of plastic, then wrap it in carbon. However, that would require vacuum bagging it which would've also incurred a lot of costs because I would have to buy all the bagging materials and tools (which I ended up getting after all, but not for that project).

So this time around, since there's actually going to be some quantity to the product (even tho it's just 15 sets), I decided to go for it and make a fork-shaped handle.

One of the advantages of a fork shaped handle is that I can use a quick-release mechanism for the blade assembly. While the thru-axle assembly featured in V1 was great, It was less user-friendly, didn't stand out as a "classic" bike component, and was actually hella difficult to make (drilling and threading the inside of a thru axle while keeping the bore straight was very difficult) 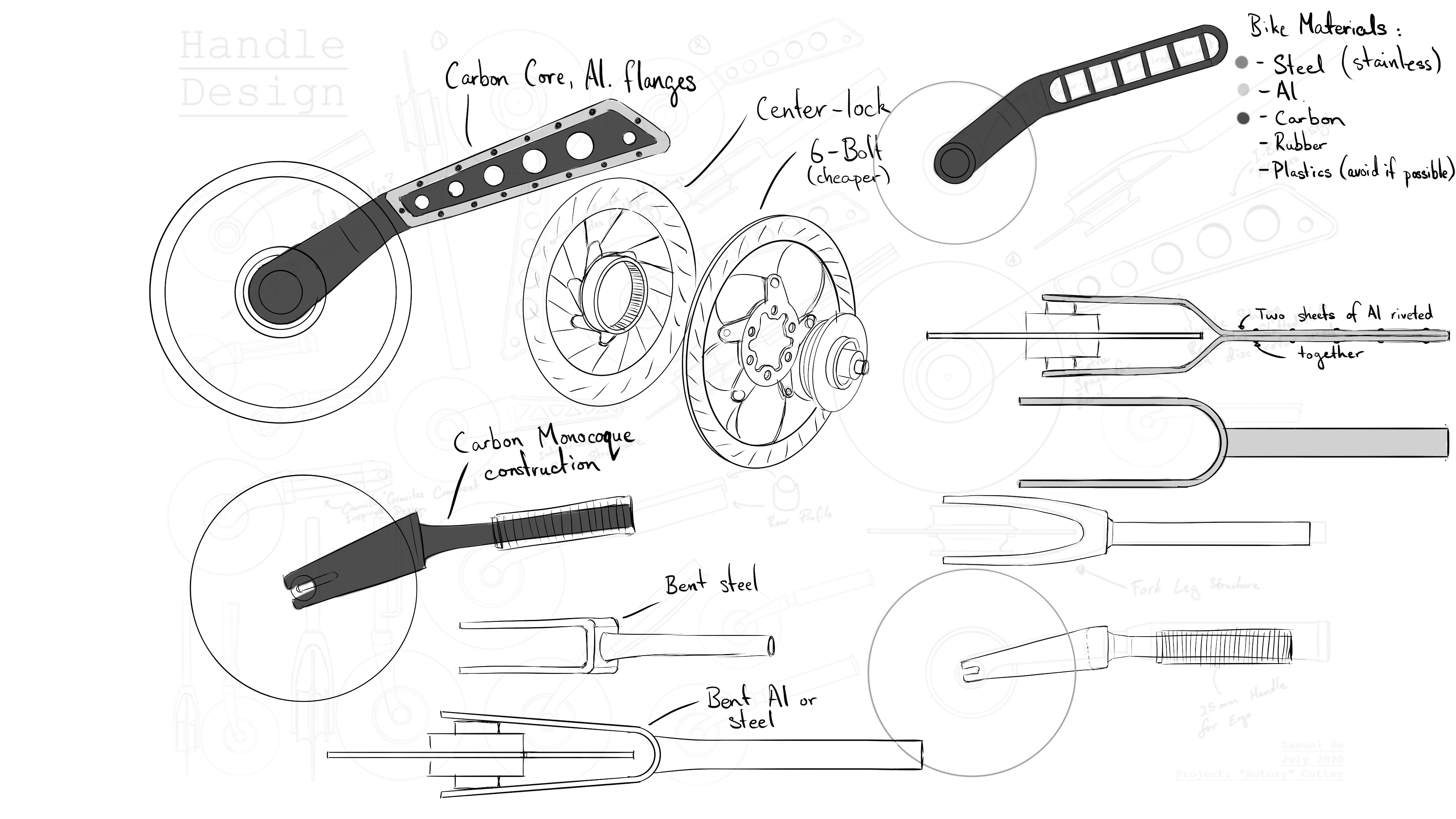 Another thing I really wanted to explore was using a 6-bolt rotor. Sure, centerlock feels more premium, but 6-bolt opens up so many opportunities. The big challenge, however, is finding a rotor that has a completely round edge with no serrations. I know Campy's AFS has it, as well as Hope's Road CL rotors. Not gonna lie, the 6-bolt rotors also tend to be cheaper which makes it easier for me to keep cost down (I don't want the retail price to be completely insane even by weight weenie standards, after all) 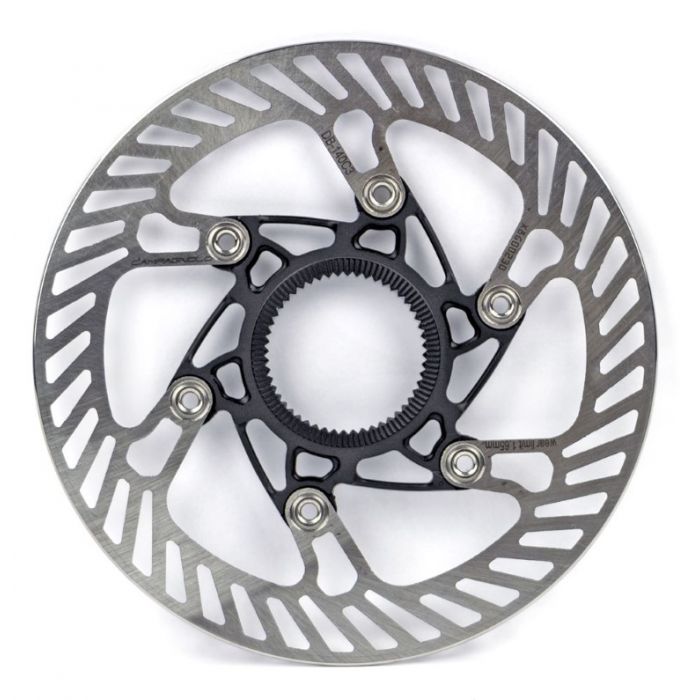 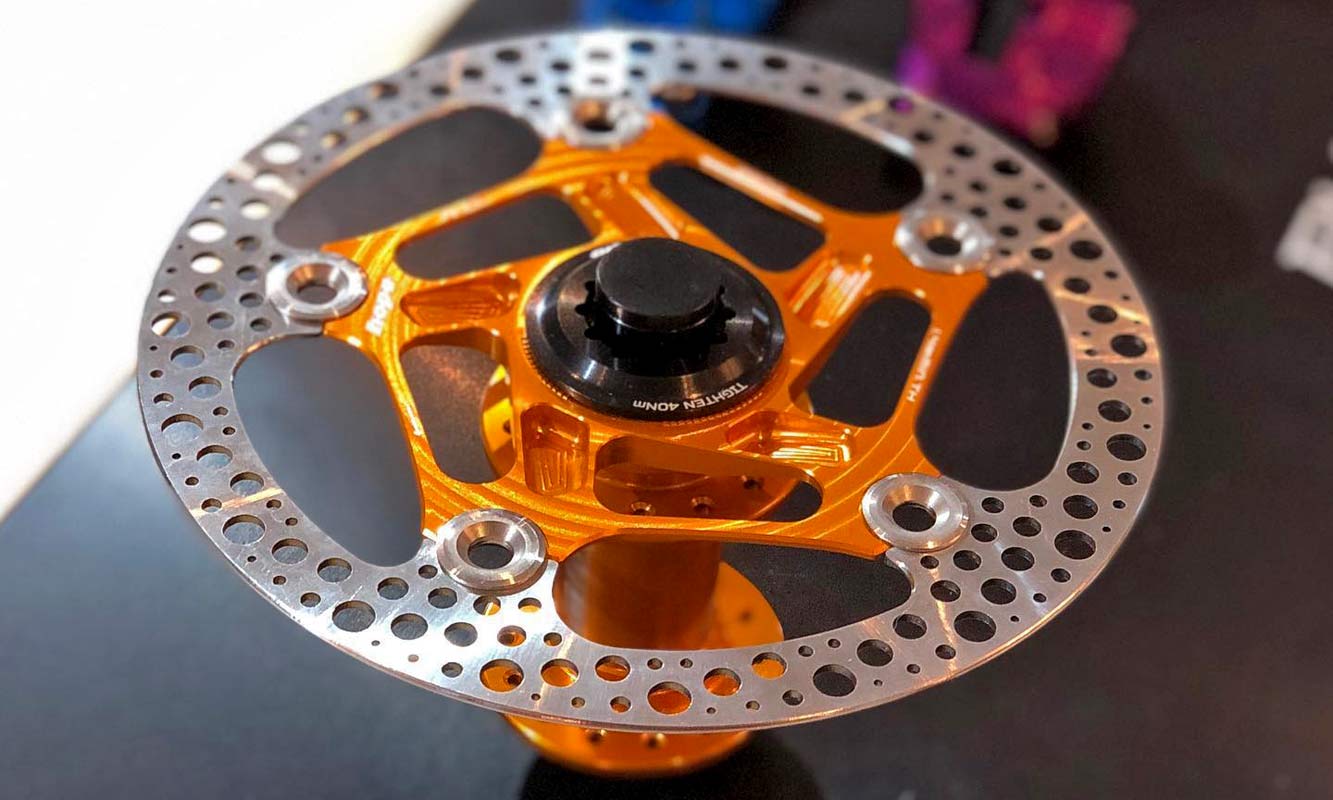 TobinHatesYou wrote: ↑
Thu Dec 16, 2021 11:47 pm
The handle needs a safety guard. The vents just make it hard to clean. Look at any pizza cutter and you’ll find they have solid cutting wheels and finger guards.

Oh please, you're missing the forest for the trees. This isn't a mass-produced product, only 15 are being made. The whole point is to have a premium bike-themed pizza cutter that is on par with the caliber of the bike you ride and not some 10 dollar toy like all those other products you find when you google "bike pizza cutter"

Regarding the vents, I use version 1 as my only pizza cutter, so I know it's only a minor issue at most. Stick it under the tap after you use it and it spins itself mostly clean. If youre washing by hand, dab it with a soapy sponge and it's done.
Last edited by jpeterson1012 on Wed Feb 16, 2022 5:38 am, edited 1 time in total.
My Bikes: Low-Budget Sub-5 Weight Weener (4.70kg]

BigBoyND wrote: ↑
Fri Dec 17, 2021 12:18 am
Ultra-premium? Not quite. More like premium. You'll need to use Absolute black titanium rotors for the ultra-premium version

Those won't rust, either. Although, this would look great in the kitchen next to Campy's Big Corkscrew

Joking aside, I like it. I have no issue with the vents, but the safety guard could be a good idea.

I don't see a link to the kickstarter, or pricing.

Campy's AFS rotors, as well as Hope's Road CL rotors are also made of stainless steel.

I've thought about adding fender-shaped safety guards, but those looked kinda lame and add significantly to overall cost because they'd have to be a completely custom piece. If it were a mass-produced product the safety guard would be a neccesity, but at just 15 sets I think we can scoot by that.

As for kickstarter links, the campaign isn't going to be up till early february due to the class syllabus. I will be continuing development in the meantime.
Last edited by jpeterson1012 on Wed Feb 16, 2022 5:39 am, edited 1 time in total.
My Bikes: Low-Budget Sub-5 Weight Weener (4.70kg]

Alexandrumarian wrote: ↑
Fri Dec 17, 2021 1:00 pm
I'm a die hard pizza maker and campa fan but you'll only get my money when you come up with a rim version

But hey, we're both rim brake fans. This is naturally the only thing that disc brake rotors are good for! 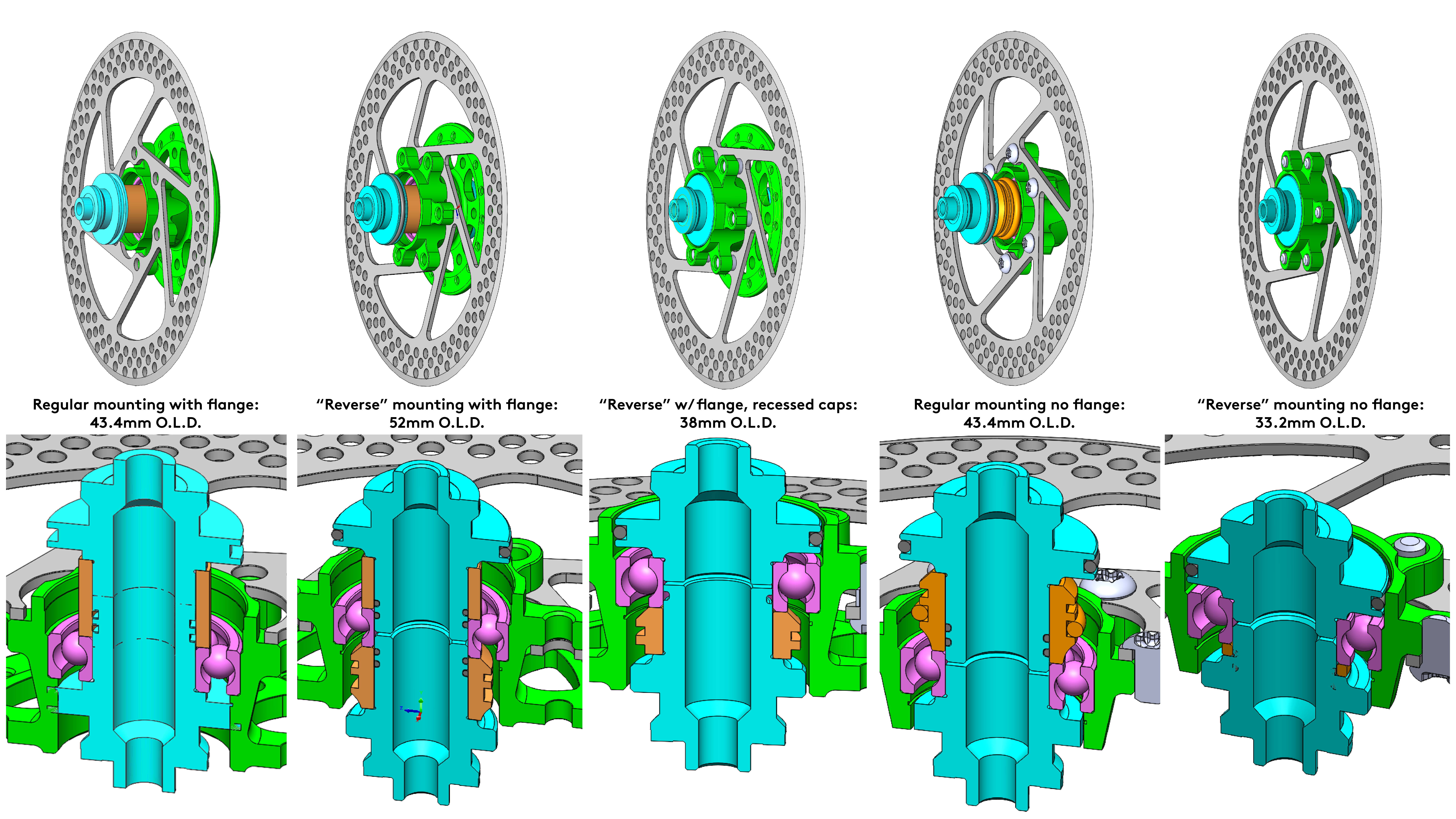 Note: the rotor is a fill-in in the model, since I hadn't settled on a rotor yet.

So one of the big issues with executing a 6-bolt design is the rotor spacing. Hub selection is crucial, since I can't make one from scratch without detracting from the essence of this project. A big issue is where the bearing is in relation to the rotor-mounting face, because this determines two things:

1. Centering the blade with the handle: this comes down to the spacer stacks. In the design, the spacers used are actually turned down from the hub's original bearing spacer. Centering the blade sounds easy, but if you have the bearing offset by too much, you end up with ugly, visible spacers on one side trying to correct it (see columns 1,2,4). In columns 2 and 3 you can see I tried to center the blade by mounting it on the "wrong" side and screwing in from the back. But while playing around with stuff on hand I quickly realized this was impossible without some serious damage to the rotor via a Dremel.

2. Over-locknut-width: same as with a wheel, the OLD changes with the spacers used during the centering process. An overly-wide blade assembly looks clunky and out of proportion, so it is important to keep this as narrow as possible while not removing too many of the defining features of the hub. In columns 4 and 5 you can see I tried to narrow this down by removing the flange of the hub, but that really killed the aesthetics and I scrapped that idea real quick.
My Bikes: Low-Budget Sub-5 Weight Weener (4.70kg]

Ok so big update all at once.

The ideation forked down 2 paths: sticking with carbon fiber, and doing aluminum. 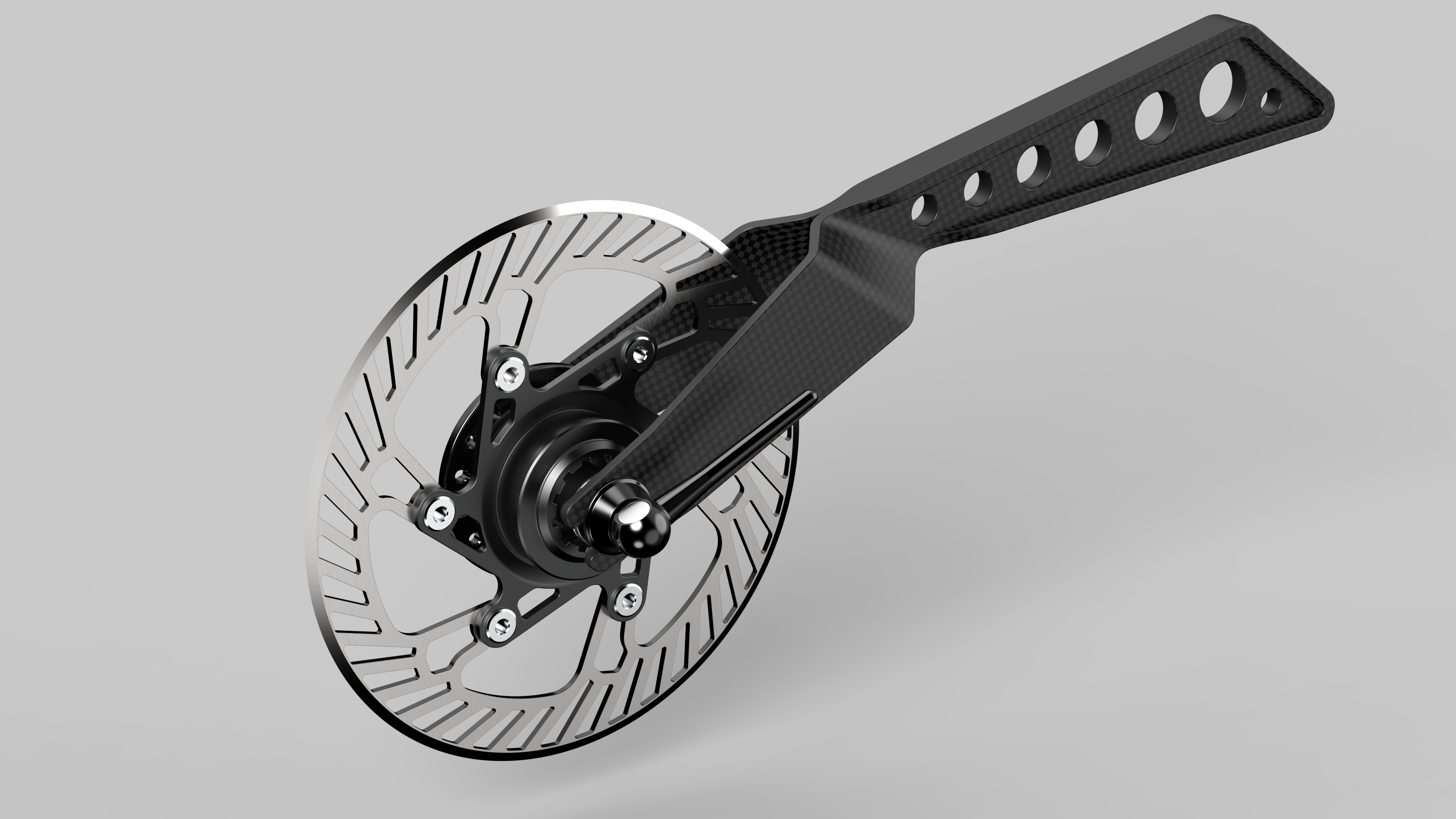 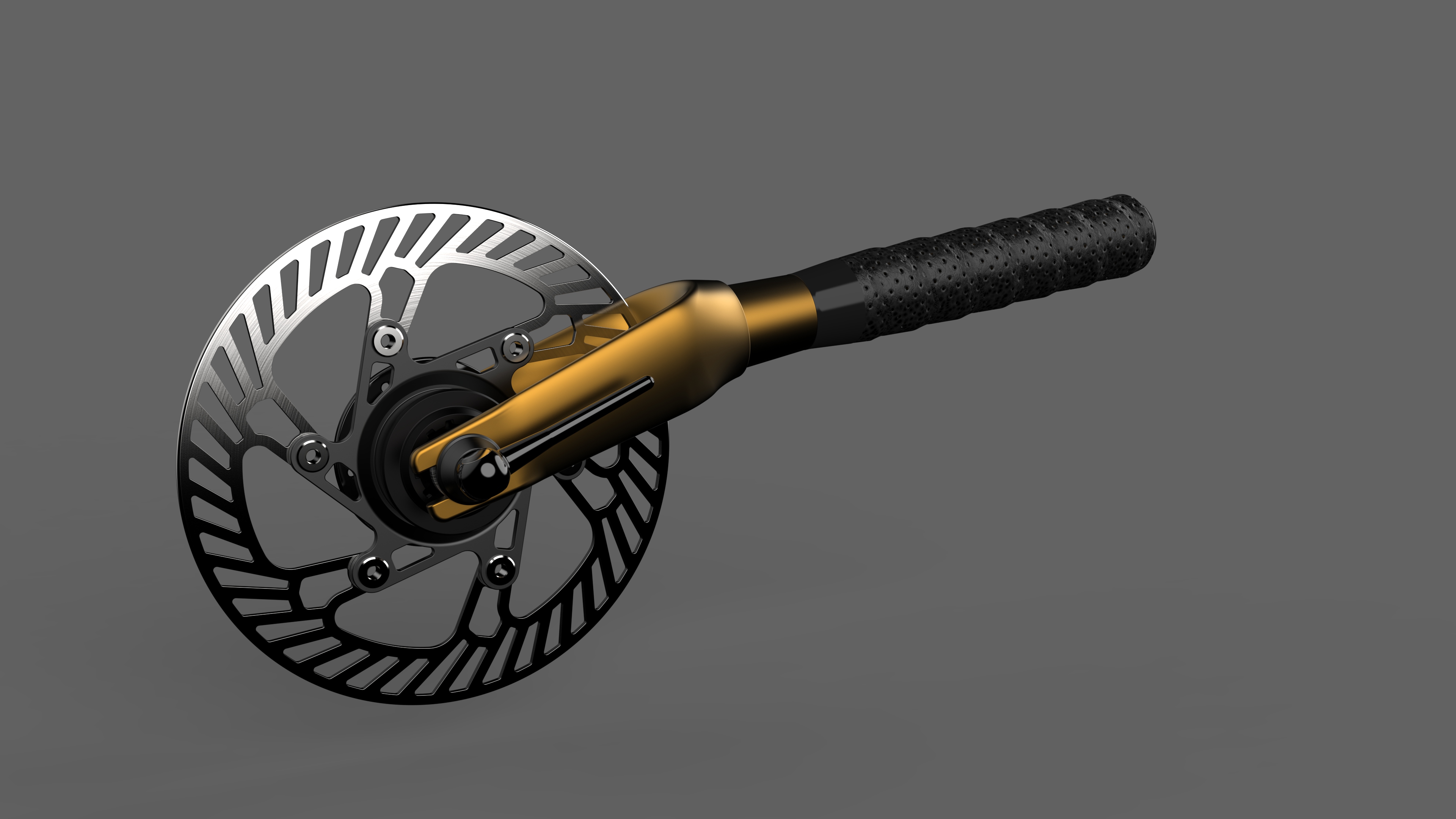 gotta be aero even when cutting pizza

I originally planned on creating a prototype of the carbon version in-house, but quickly reflected on how time-consuming it would be to hand-produce these without serious investment into molds, equipment (kiln), and materials (big roll of prepreg for $$$$$). The wet layup process is a very messy one, and is not a fast one especially when it comes to smaller, complex parts such as this one, since the fibers fray and go in directions you don't want, creating voids, resin-rich areas, and general aesthetic defects that I found to be unfitting for a product of this caliber and price point. Simply said, if it were done right at this quantity, nobody would be able to afford it.

That leaves the aluminum fork legs, which I actually don't find to be "less premium." It certainly loses that "oh it's carbon fiber!" appeal but it gains the weighty feel of something built to last forever (not in WW spirit, it's too aero for that).

After hours and hours of messing with different 6-bolt hub and rotor configurations, I ultimately settled back on the campy rotor with centerlock hub. I bought and cut up like 6 different 6-bolt hubs, contributing greatly to the bike parts shortage, but none of them really worked as well as the good ol' centerlock.

The handle is 22.2mm, so you can either wrap it in bar tape (will come wrapped in bartapee by default), or you could mount your favorite MTB grips on it: 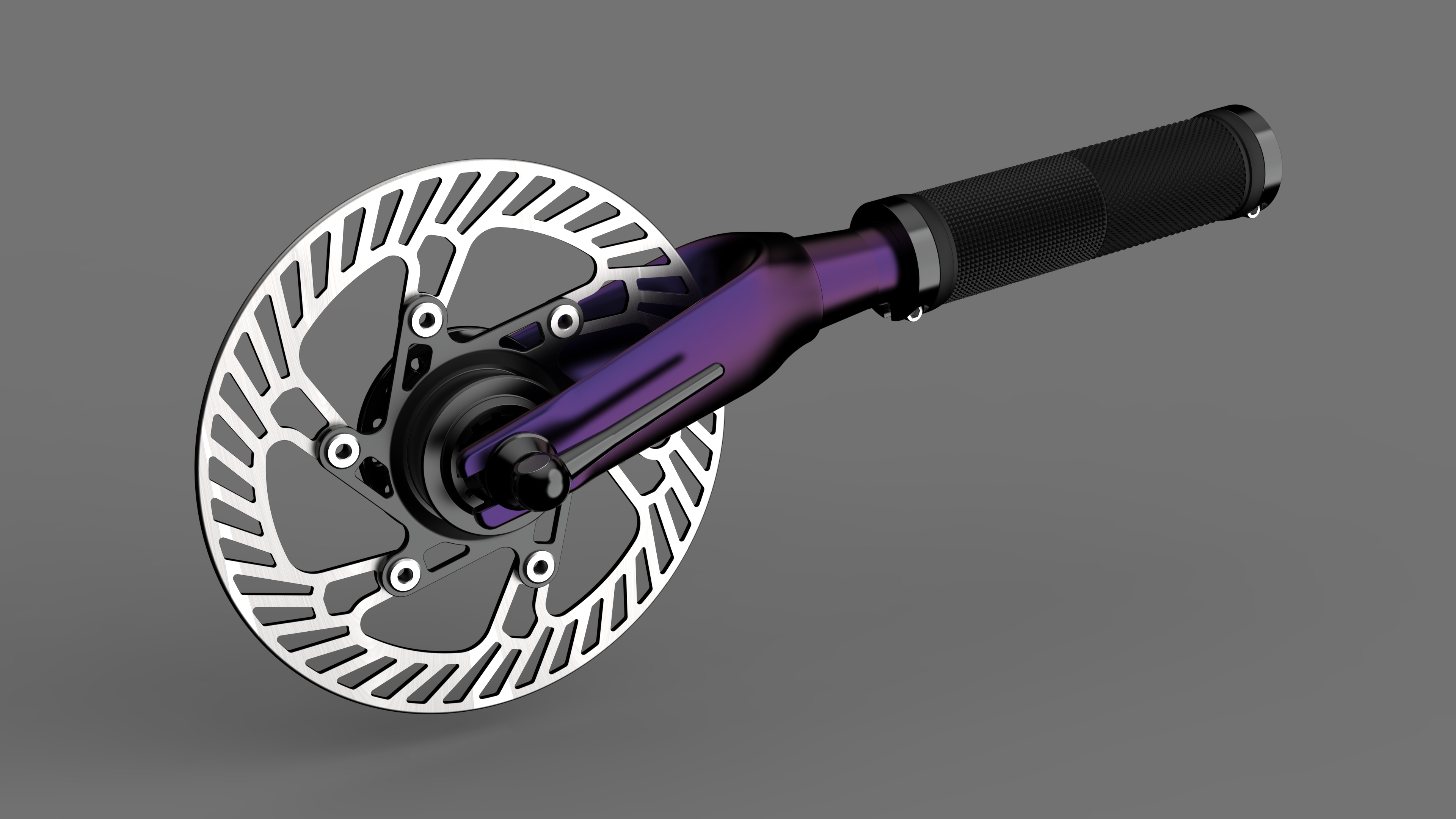 PS: I should mention that I didn't go with the Hope rotors because I just can't find them in stock anywhere. I'm looking specifically for the Road CL variant, since it is centerlock, stainless, and completely round around the circumference.
Last edited by jpeterson1012 on Sat Jan 08, 2022 11:40 am, edited 1 time in total.
My Bikes: Low-Budget Sub-5 Weight Weener (4.70kg] 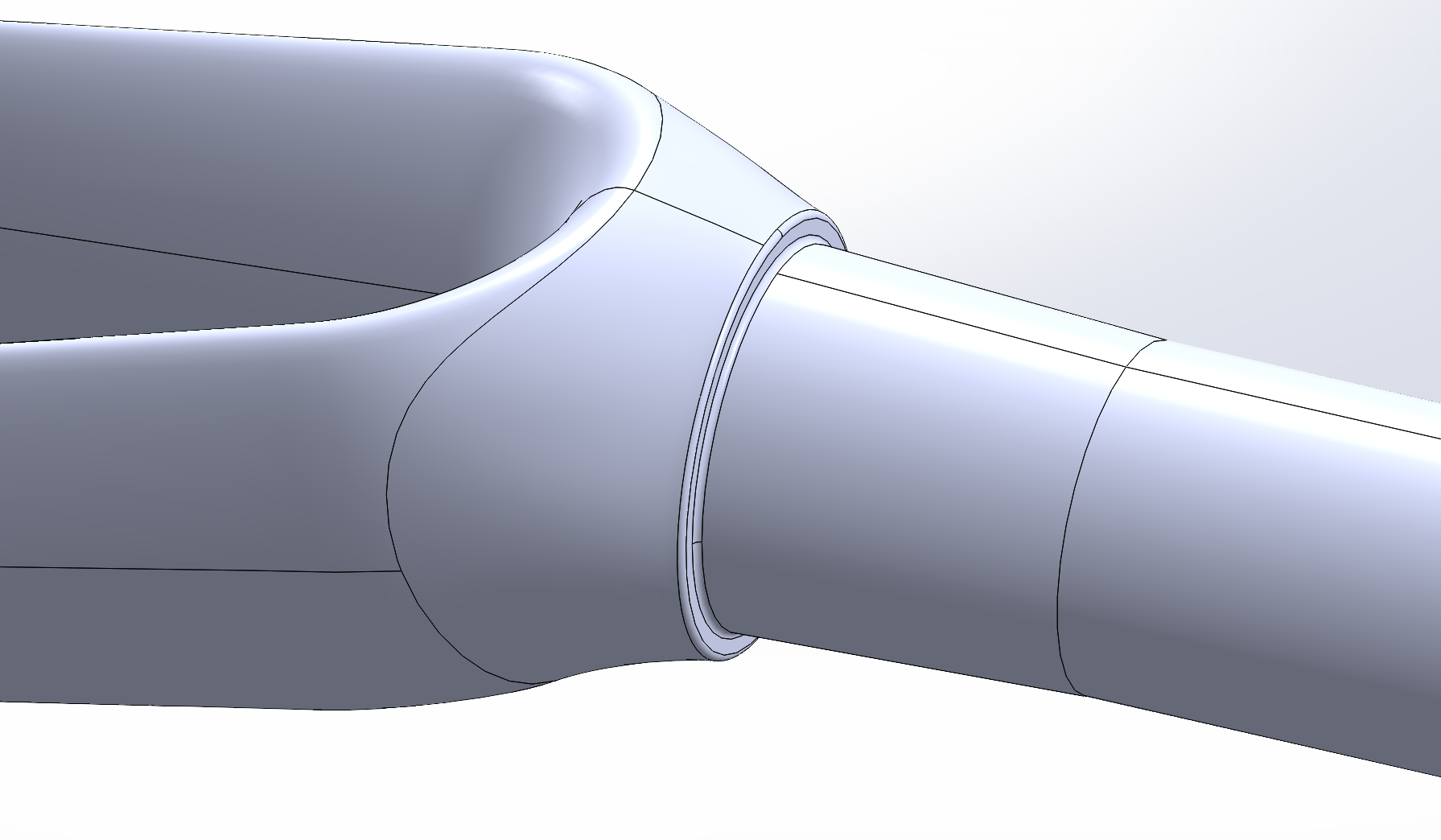 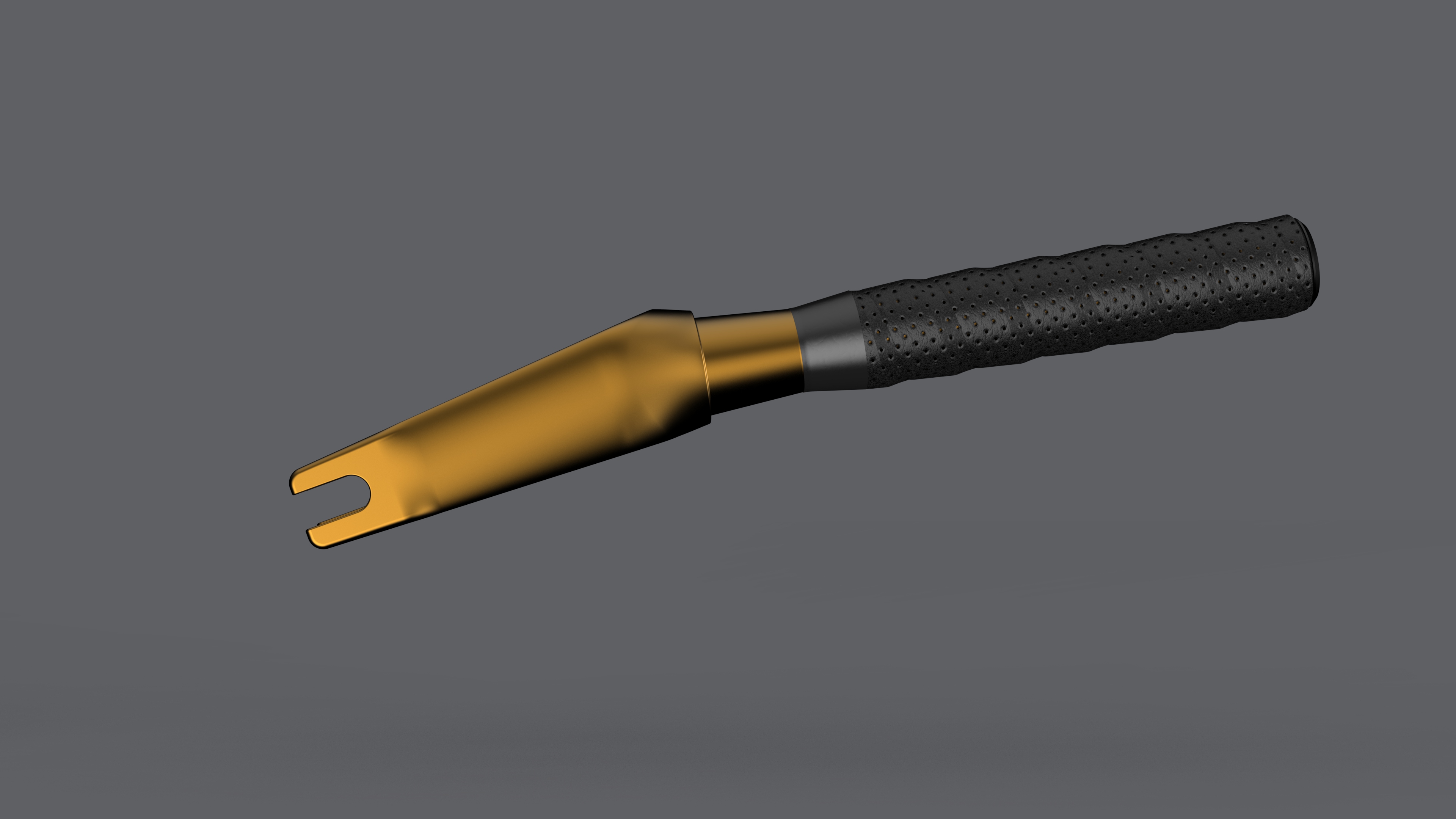 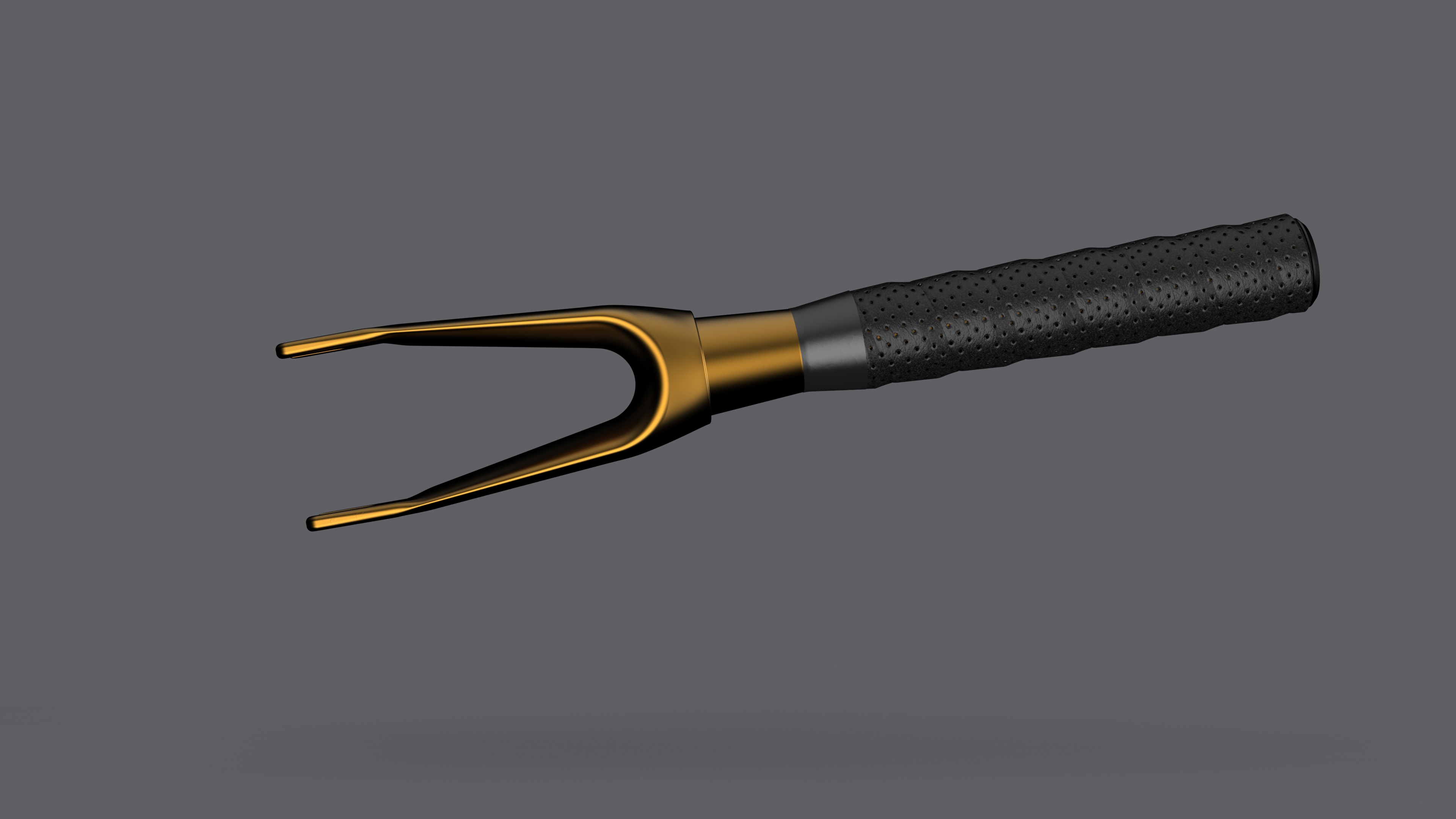 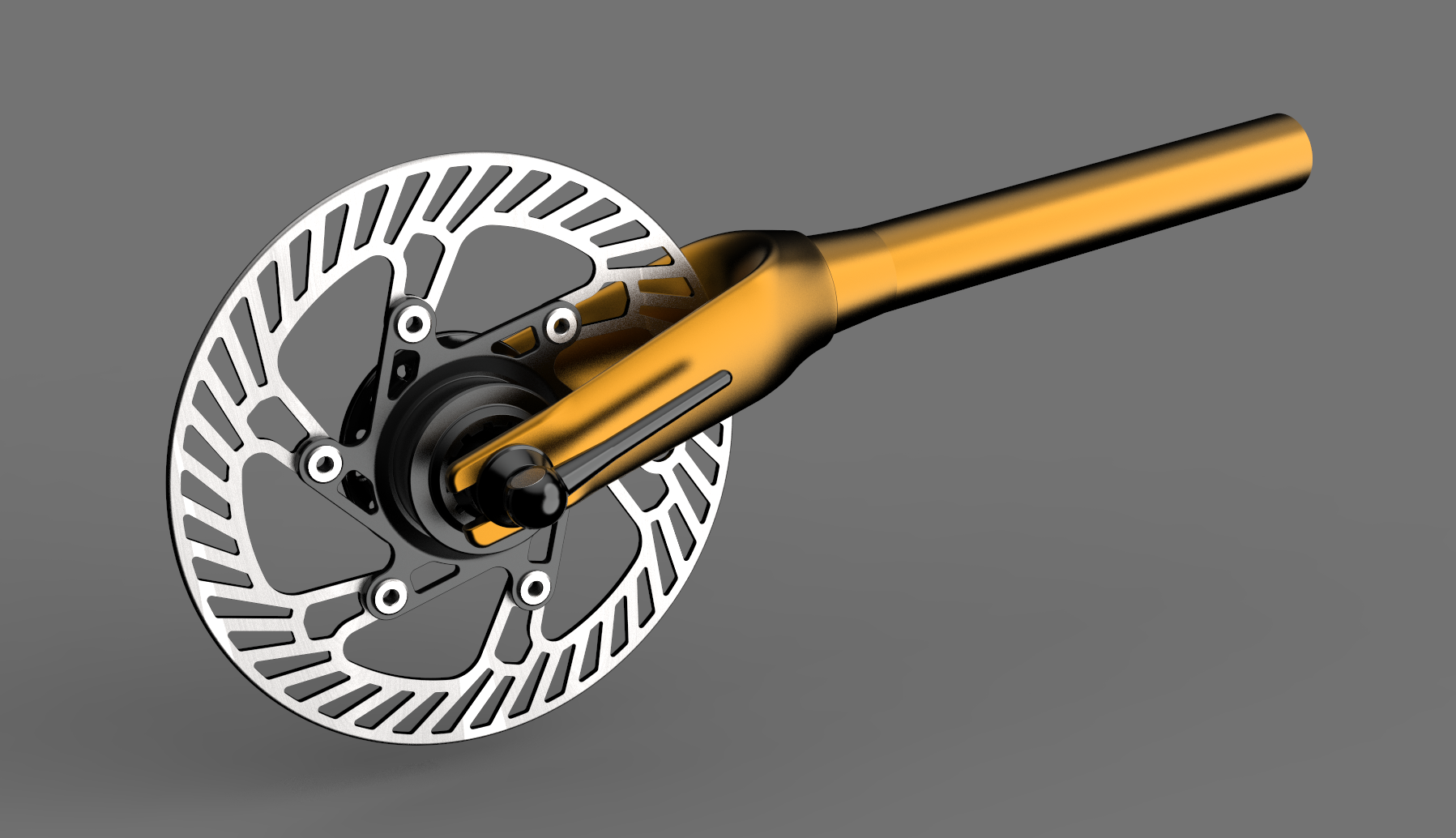 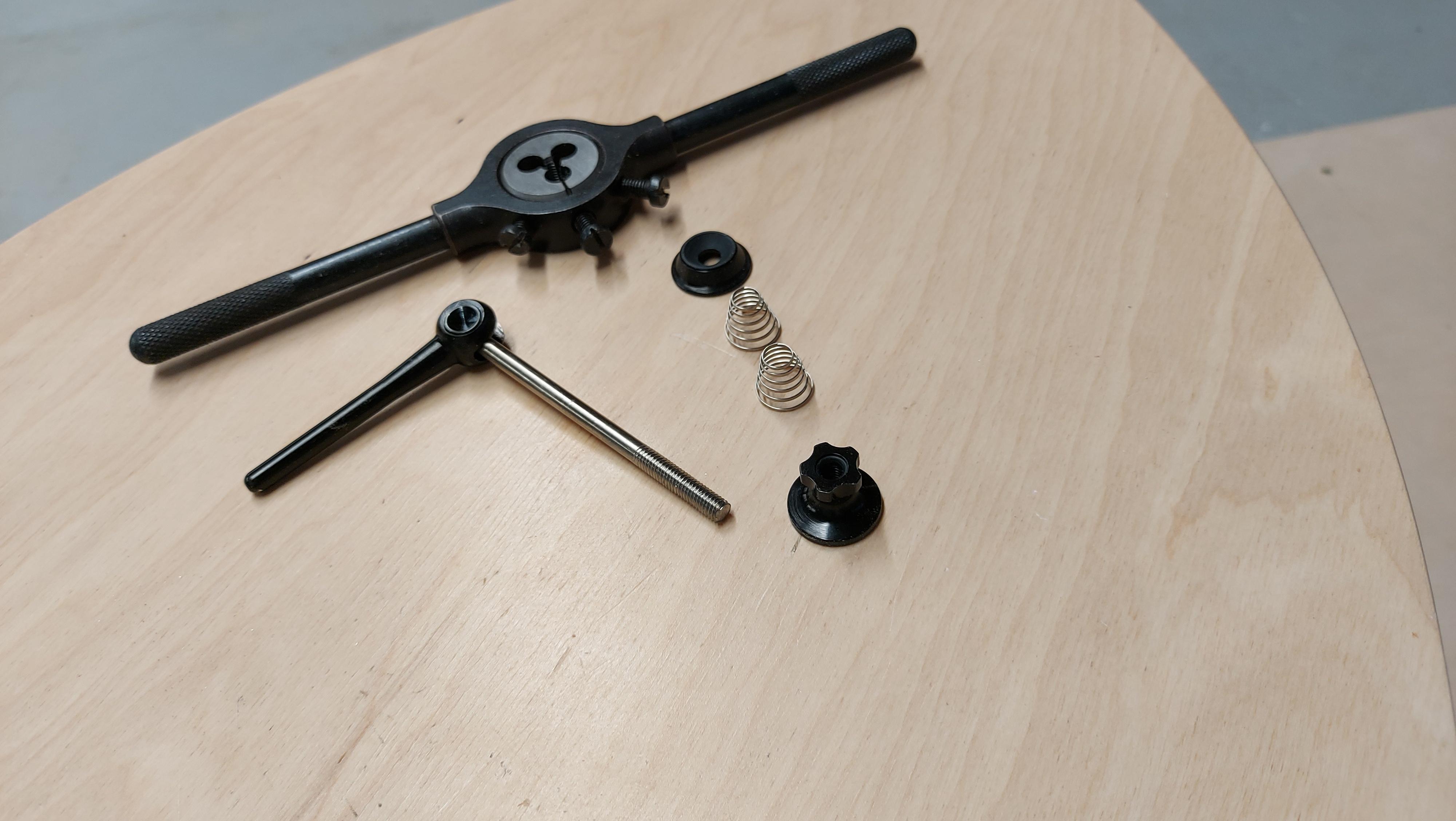 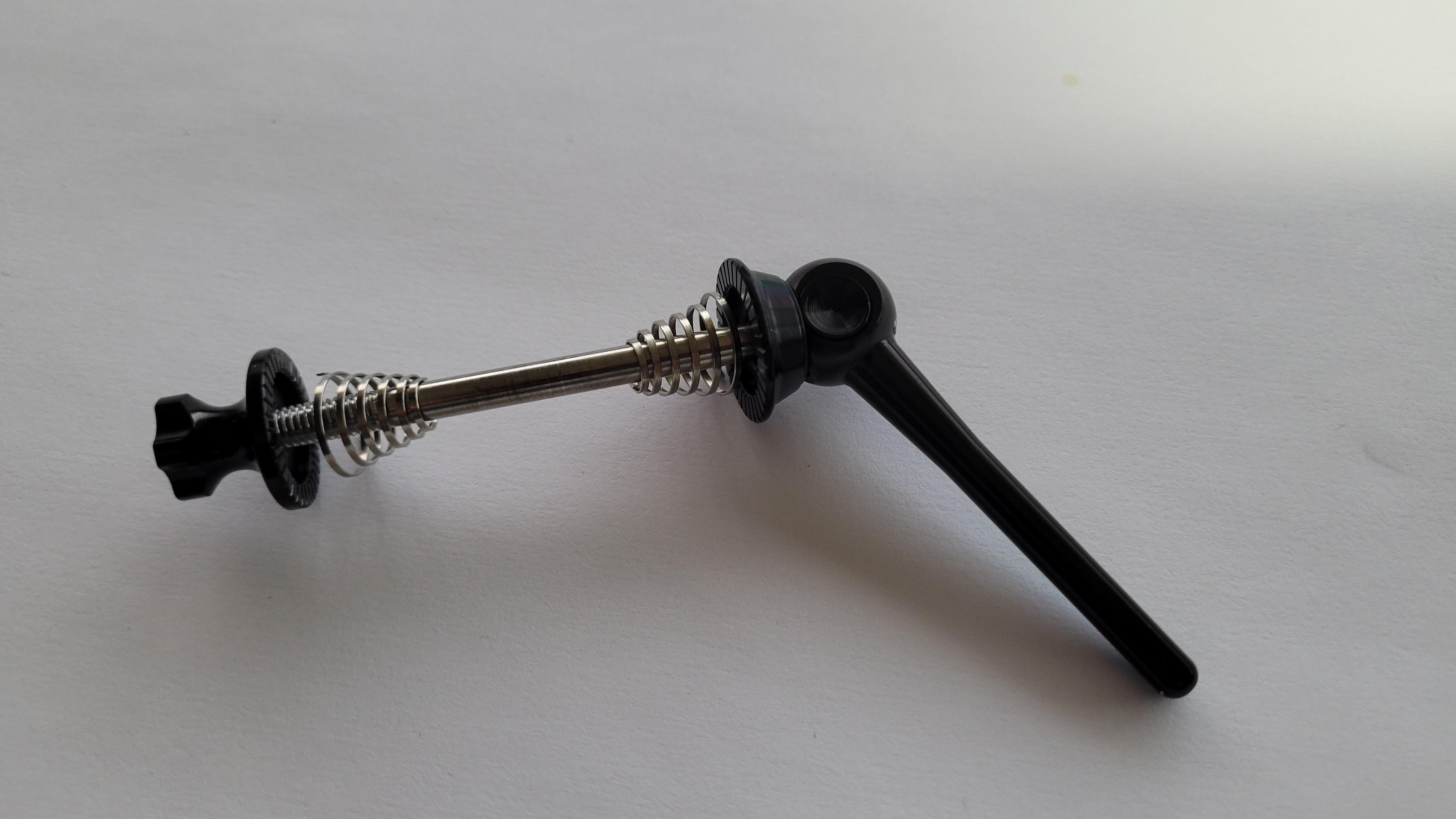 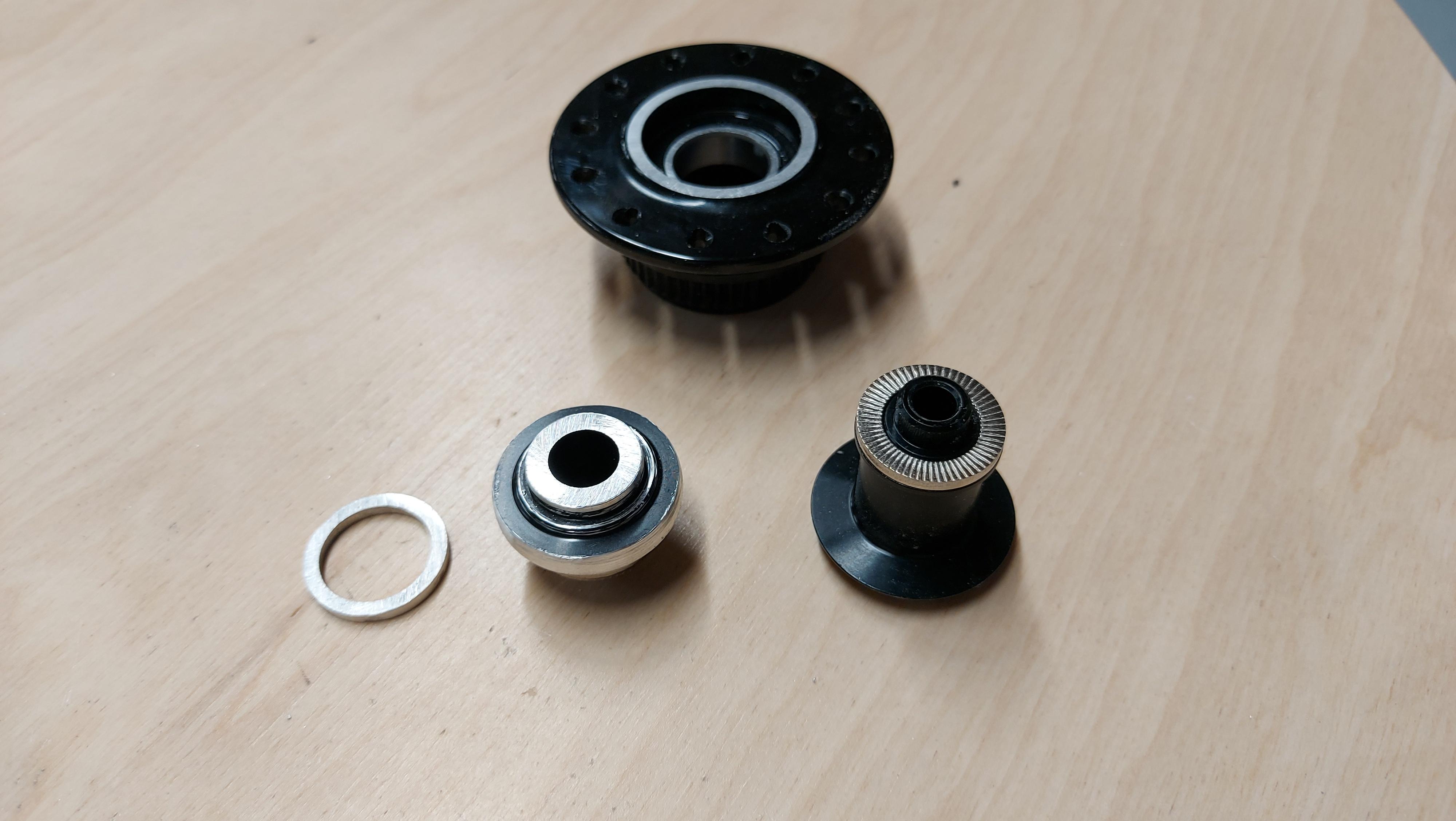 Hub shell and end cap fabricating, wish I had the lathe when I did this. ended up using my drill as a makeshift lathe. 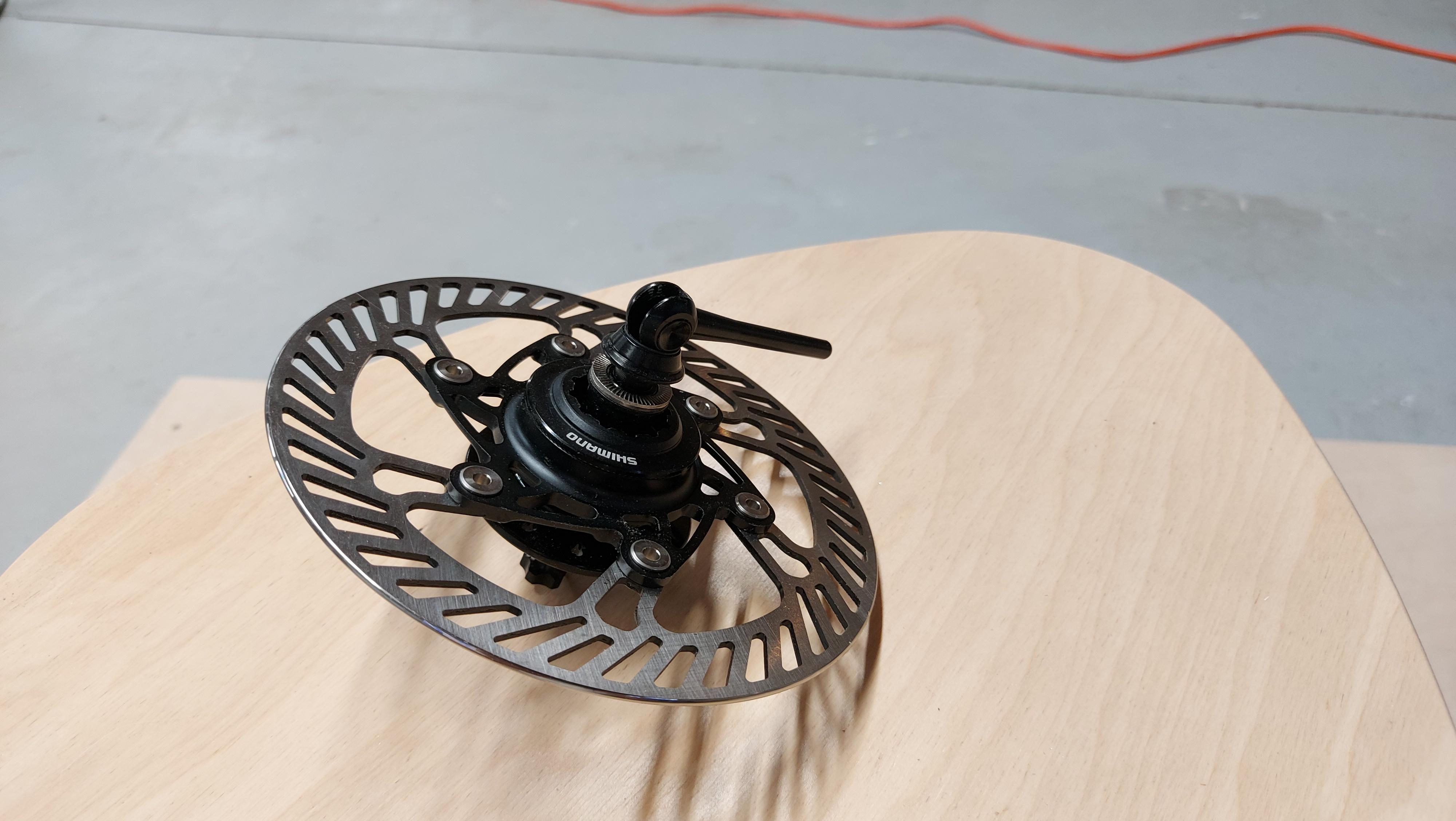 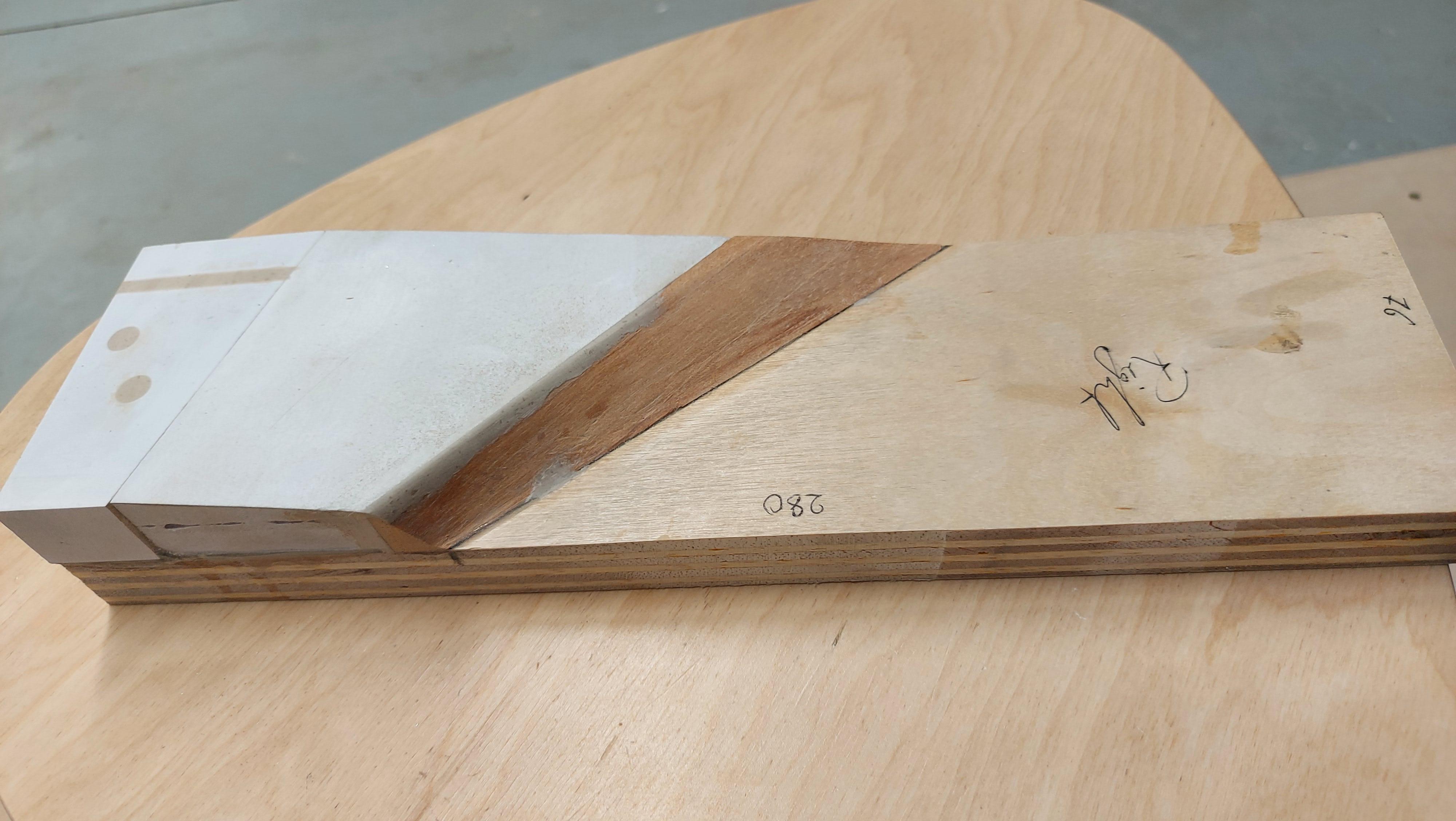 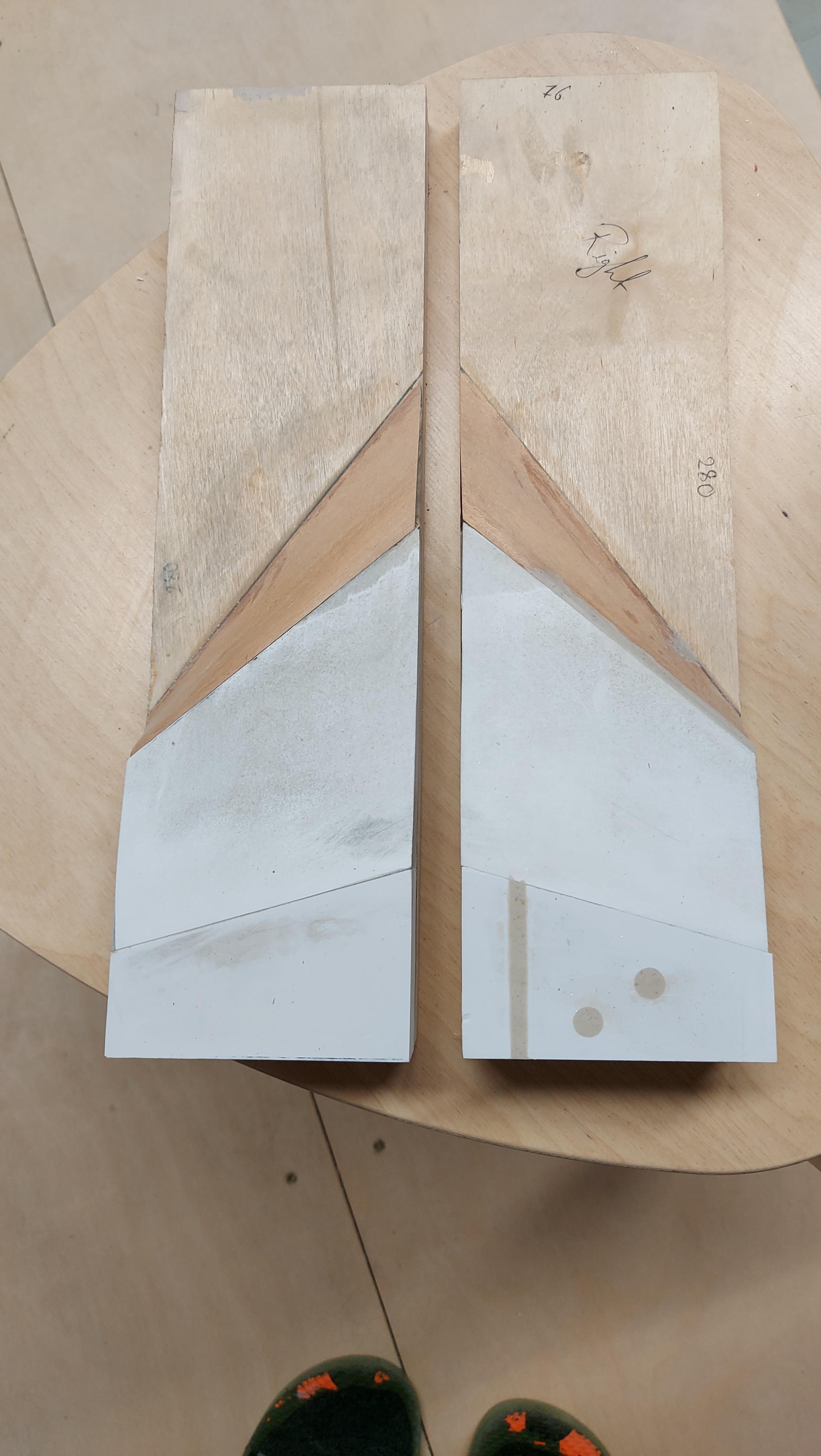 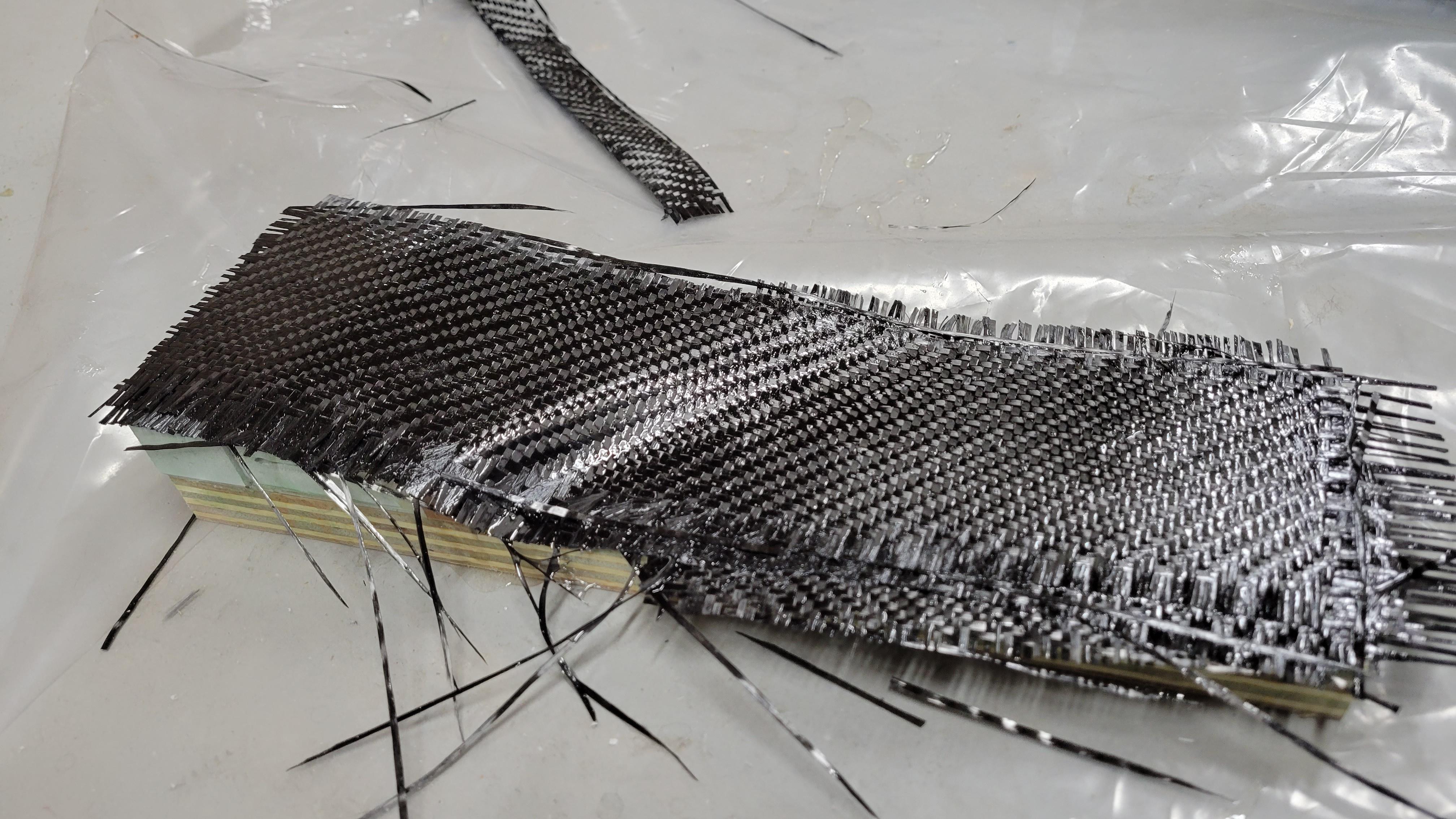 We're doing big time skips here! you get to fast forward through all the dull waiting I did. 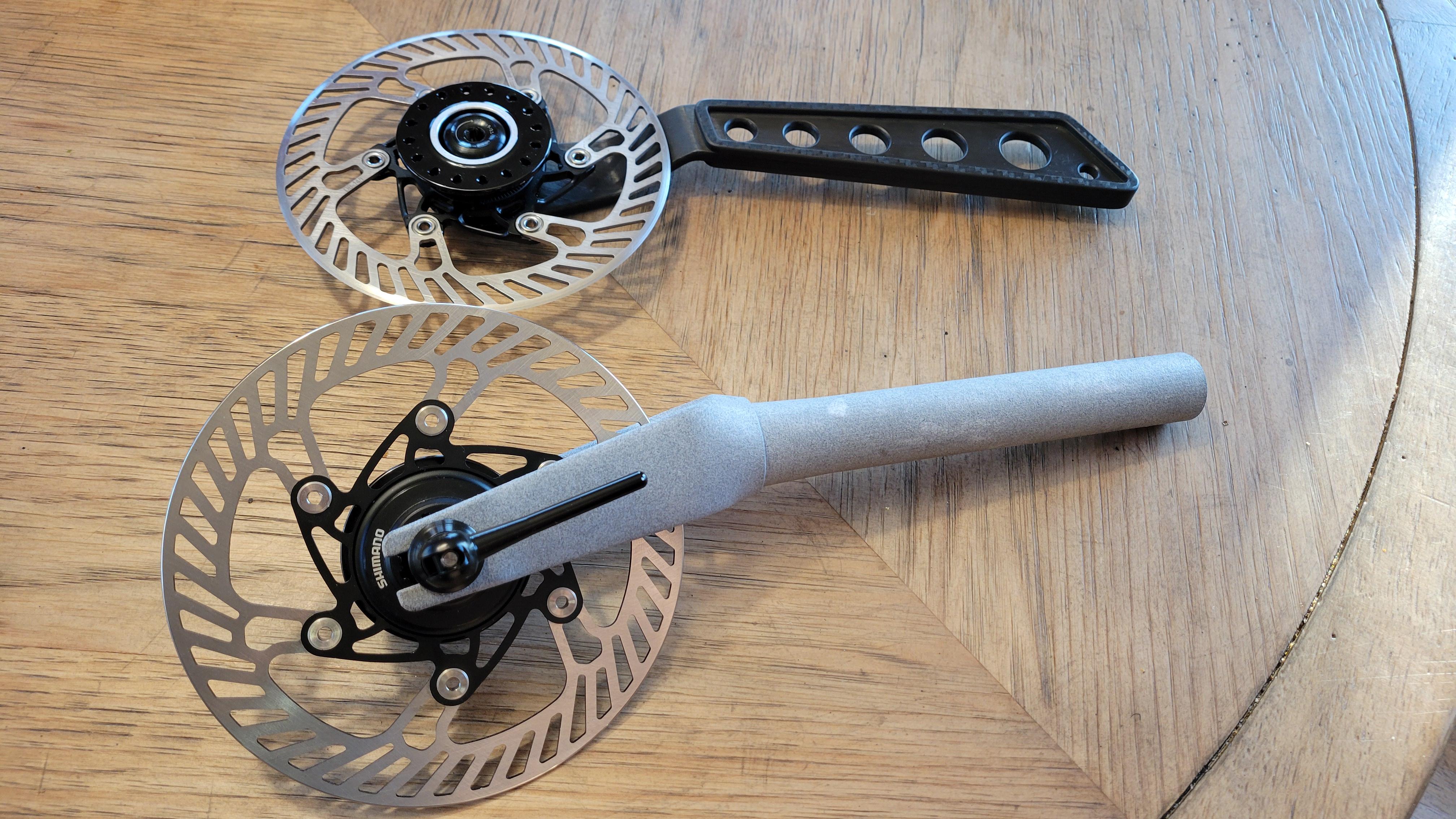 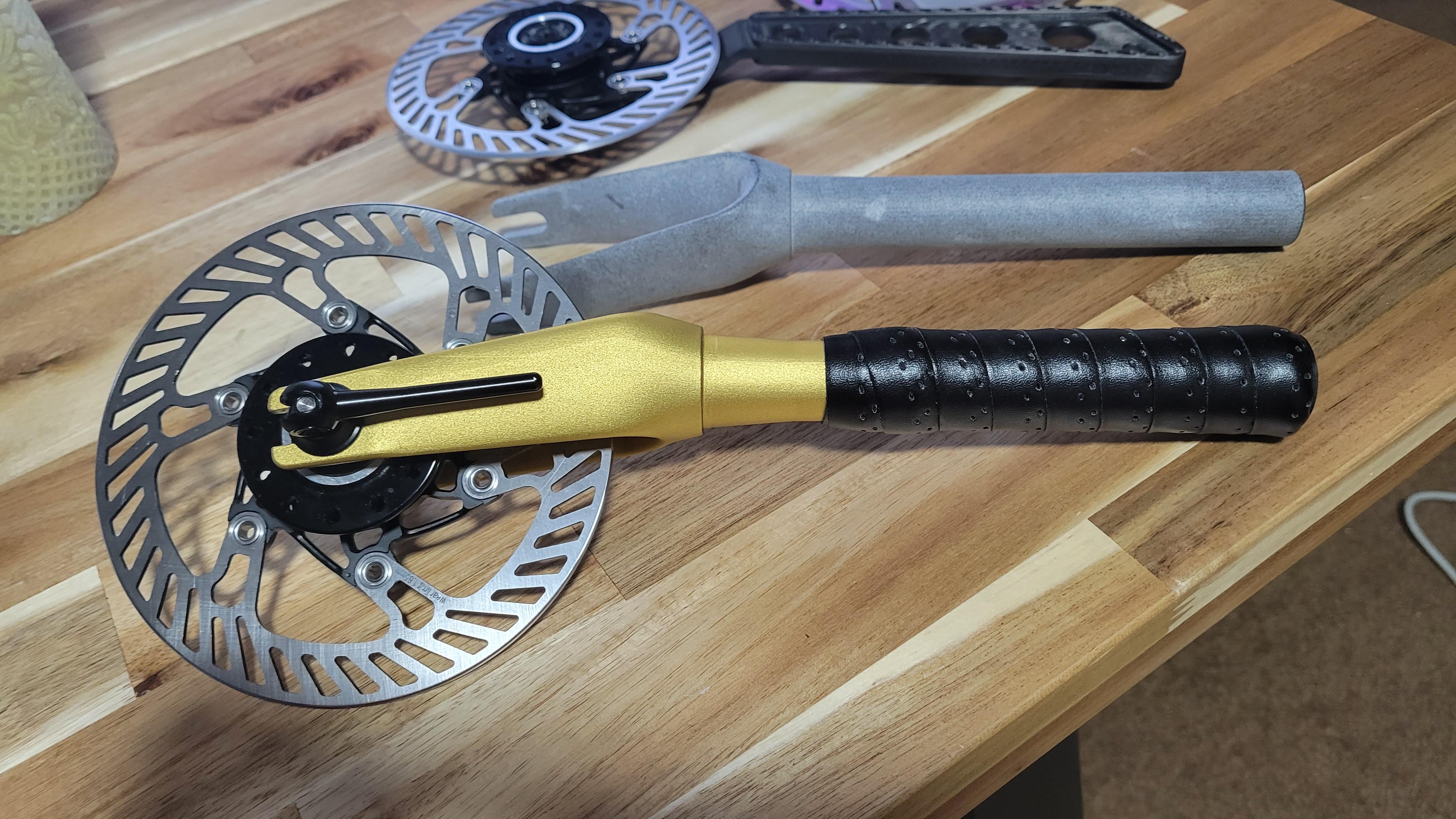 First aluminum functional prototype is in! Here's it in bar tape 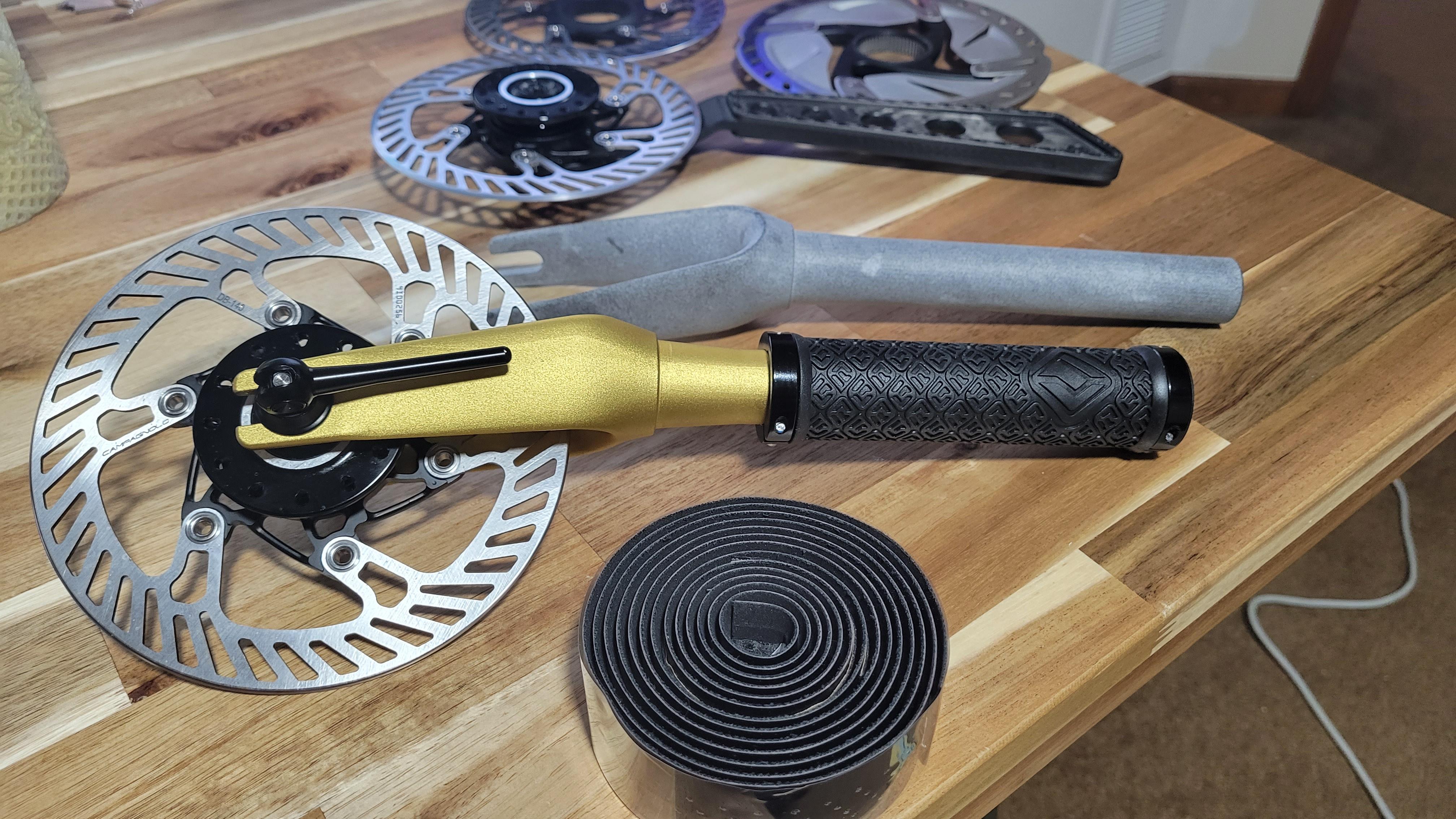 And here it is with an MTB grip. Note that Locking grips are necessary if you choose to use grips instead.

And now for my comments on this sample:
1. I did end up anodizing the sample gold, since I was stuck between like 3 colors and just had to make up my mind. The gold in the sample is a little too desaturated. I wanted something stronger, and more orangish than yellow. That's something that I'll be watching for in the second alloy prototype probably coming in a few weeks.

2. The bead blast is too coarse. The next prototype will have it much finer.

2. There are still some mill marks that I find to be unacceptable, such as the ones pictured below. I've discussed these with the manufacturer and the rep says that's something they can fix in subsequent runs. It mainly comes down to having the machine go slower, and having better tool paths. They probably rushed this a little since it was a prototype and a one-off for them. 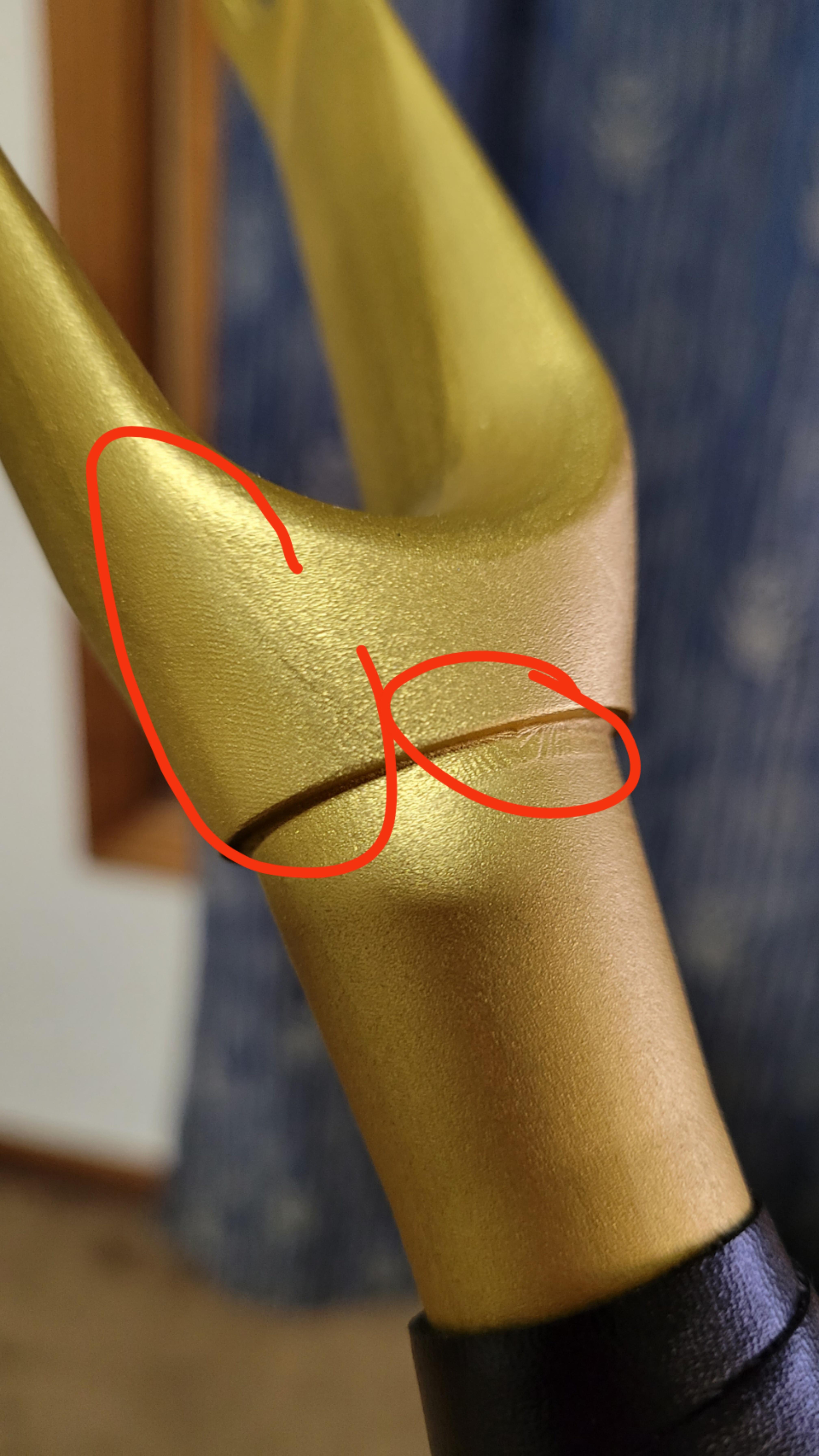 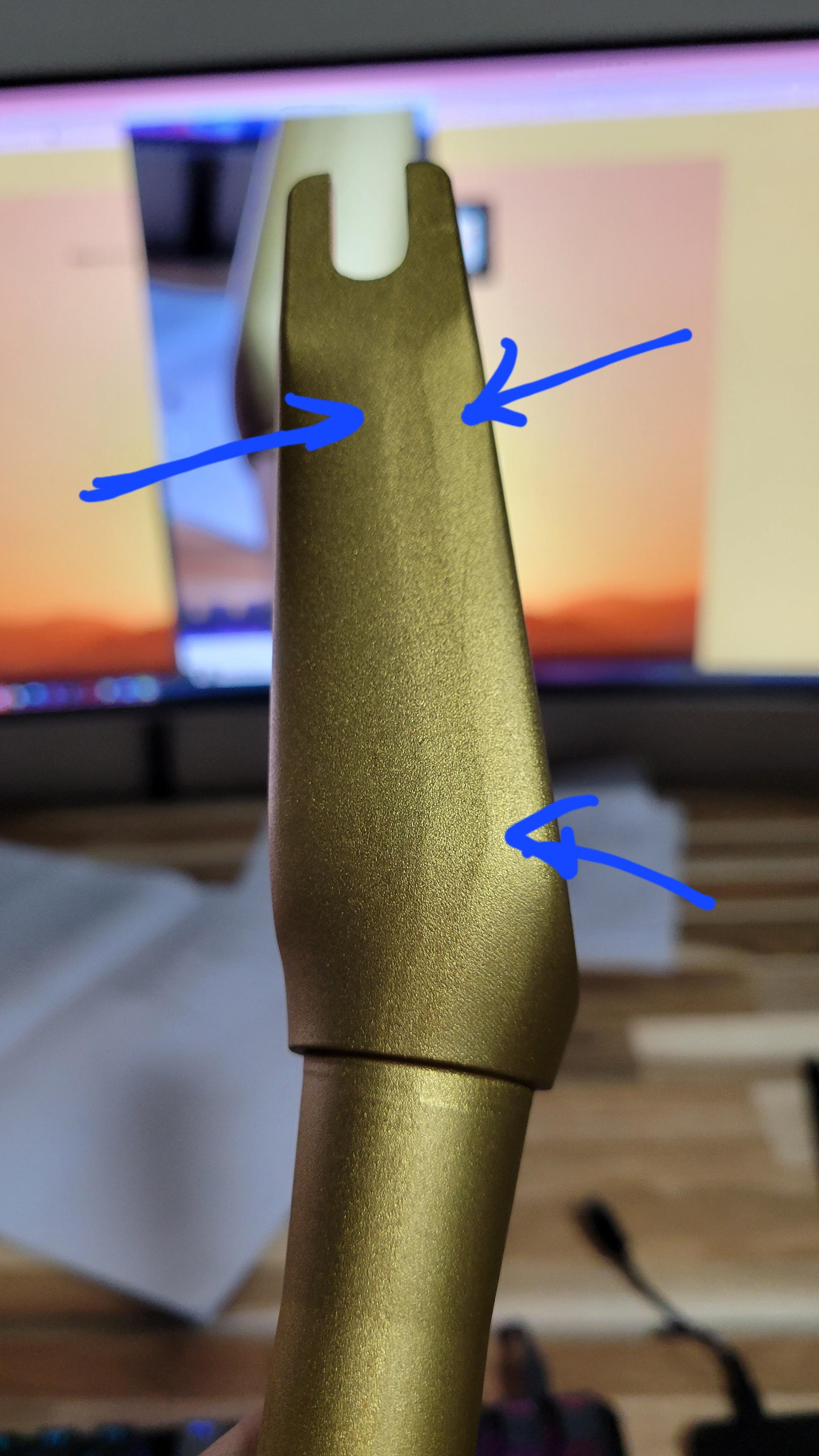 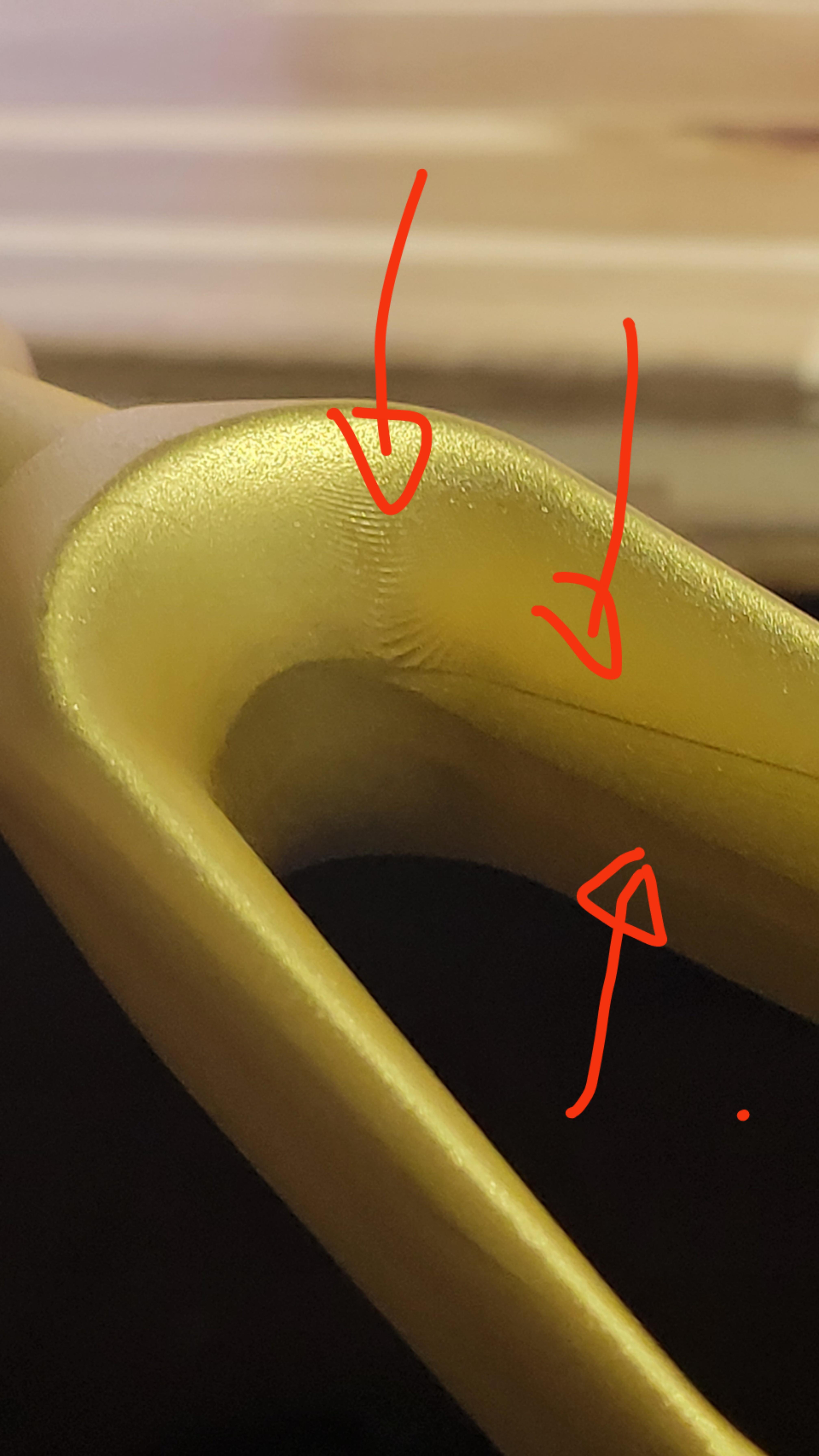