This will be great!
Top

Yep. The other option is the Bontrager Speedstop Pro.
Top

Looking forward to seeing the complete build. So far it looks sick! Something refreshing about a top notch Alu frame with top-notch most beautiful groupset. Strong work!
Top

Thanks for the great comments so far I have a few more updates/observations to come. First is there may well be much better DM brakes than the Campag ones but I couldn't put anything other than Campag on it and if my experience with disc brakes is anything to go by I doubt there will be a huge difference. It's all personal perception so far I'd love to see some real world data but there appears to be non about and certainly nothing robustly scientific done!
Top

Does the ferrule screw into the arm, or does it just sit loosely? The ferrule itself is threaded, but looks like the arm isn't threaded. I've always found this to be an utterly stupid design because it adds play to the system. Hence me constantly banging on about how good the Potenza skeleton brakes are... the ferrules actually screw in.

They are standard Campag style that just slide into the arm. There's no thread inside. The thread is for the adjuster itself. Personally I've always found this to be super easy to be able to adjust the cable 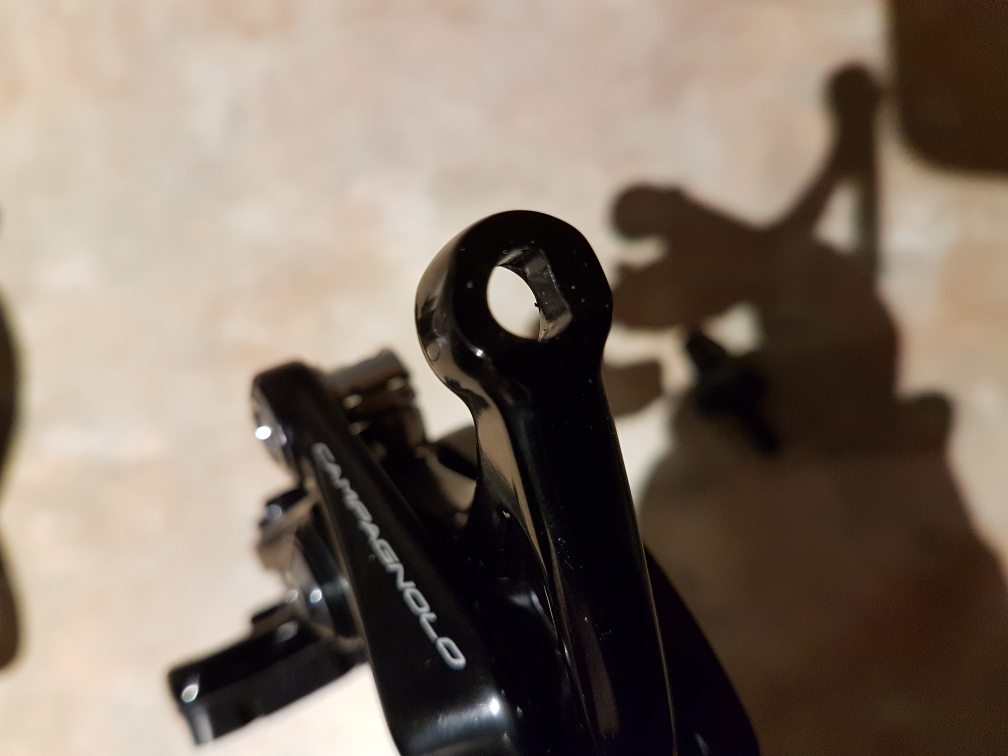 What a monster this is!!! It adds 25 mm to the stack height. Now I know you can always buy a flatter one but it was something I had noticed seemed to be fitted with all the CAAD13s I'd seen on reviews and sure enough it's the only one that comes with the frame. You also have various spacers that can give you a maximum of 55mm I think it is. But it's this 25mm top cover that prompted me to go for a smaller frame than I normally would have. As a result it's now putting me exactly at the correct height so no more spacers are required. It does mean I'm waiting for a 140mm Deda Superzero stem instead of fitting my usual 120mm but that's because of the shorter top tube but I was expecting that. But what is stack height? It's a measurement from the bottom bracket to the top of the head tube. But when they only supply this thing you have to add 25mm to the stack height of this frame compared to any other frame I've bought. This is why I tend to use a measurement from the centre of the front wheel to the bottom of the stem to work out the height of the front end. 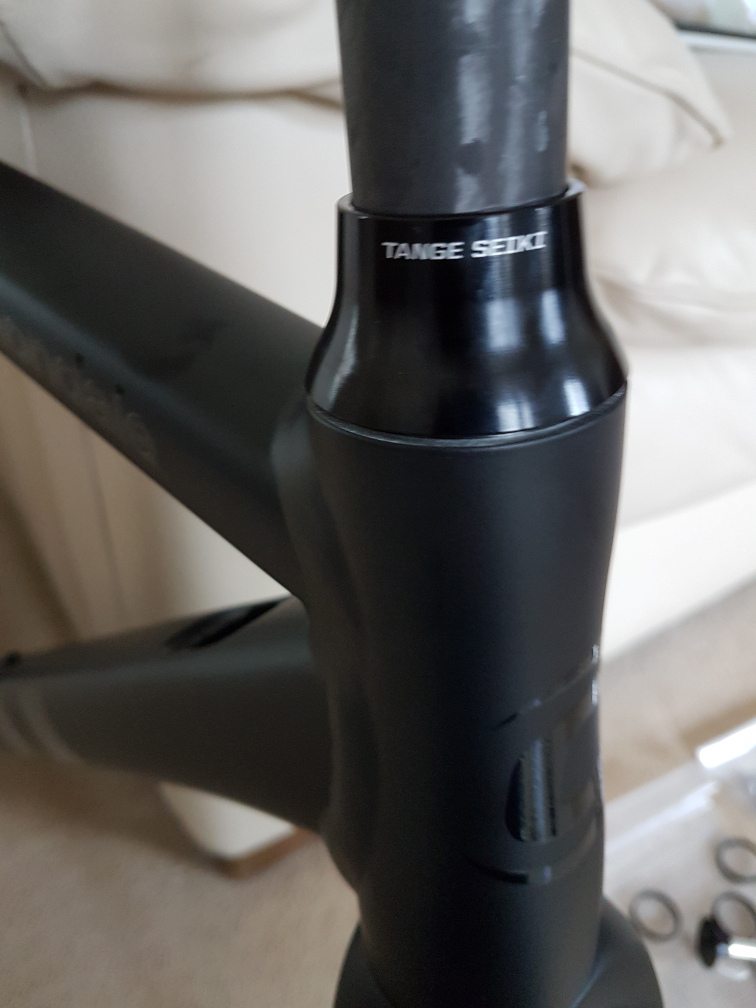 Carrying on with headset things I really don't like the look of the compression bung. It looks extremely feeble and its design means I can't change the top cap to anything I might want to. 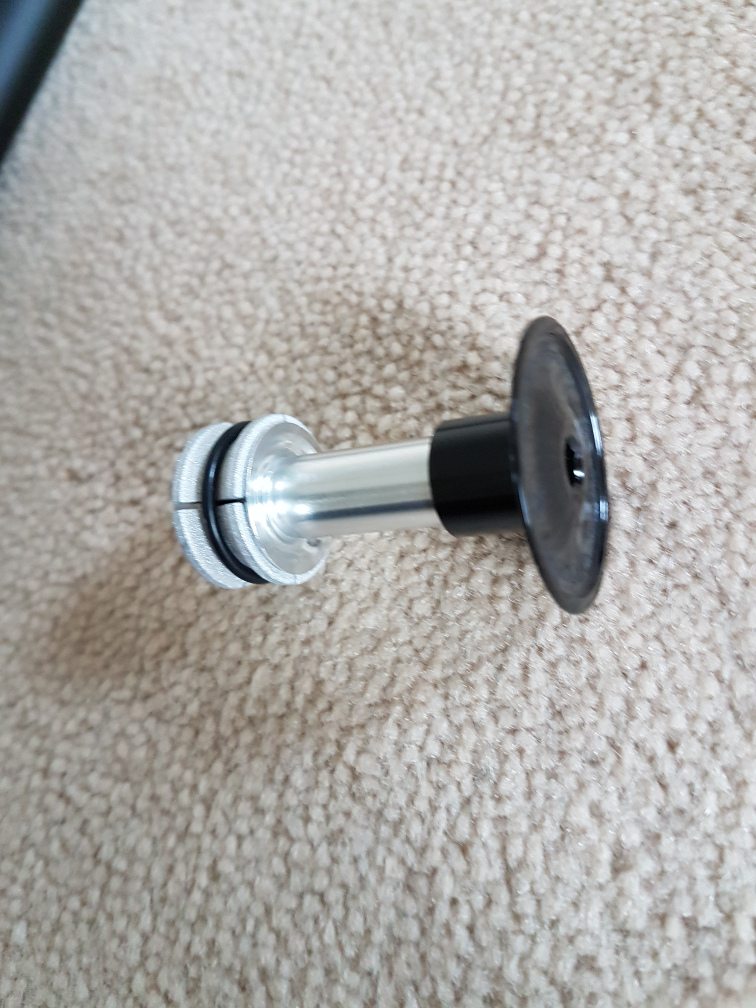 So it's going and I'll be fitting this huge thing, yes it's a hefty weight I think the Cannondale one was something like 18g. The observant amongst you will recognise it as a Colnago one. 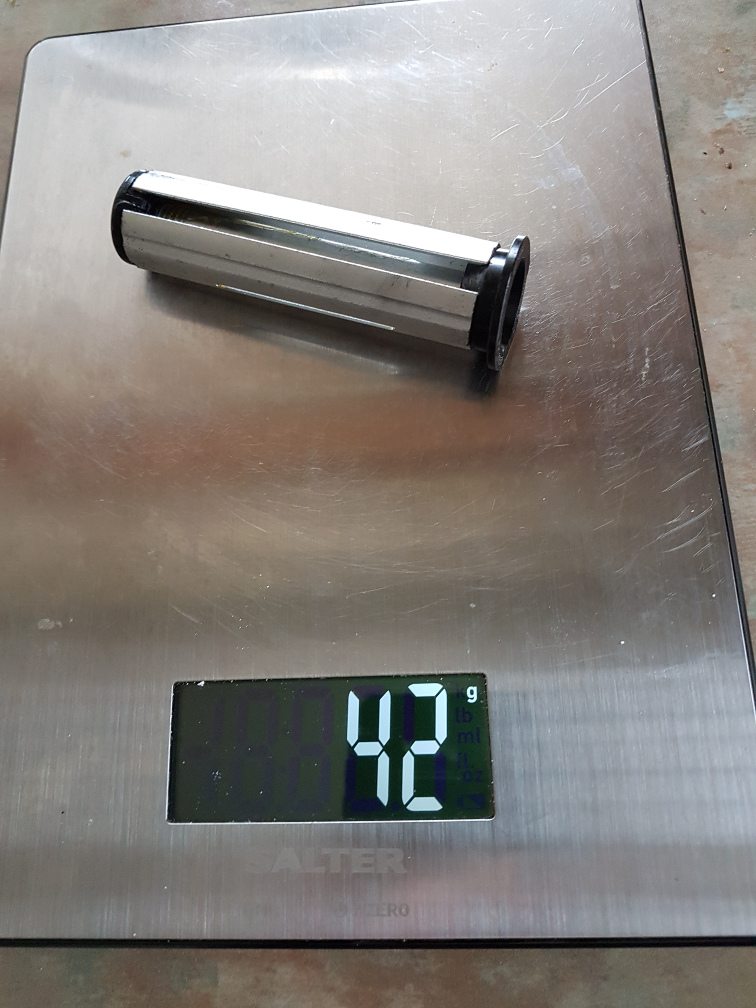 And here there are together. I know what I prefer to be sticking down my steerer tube 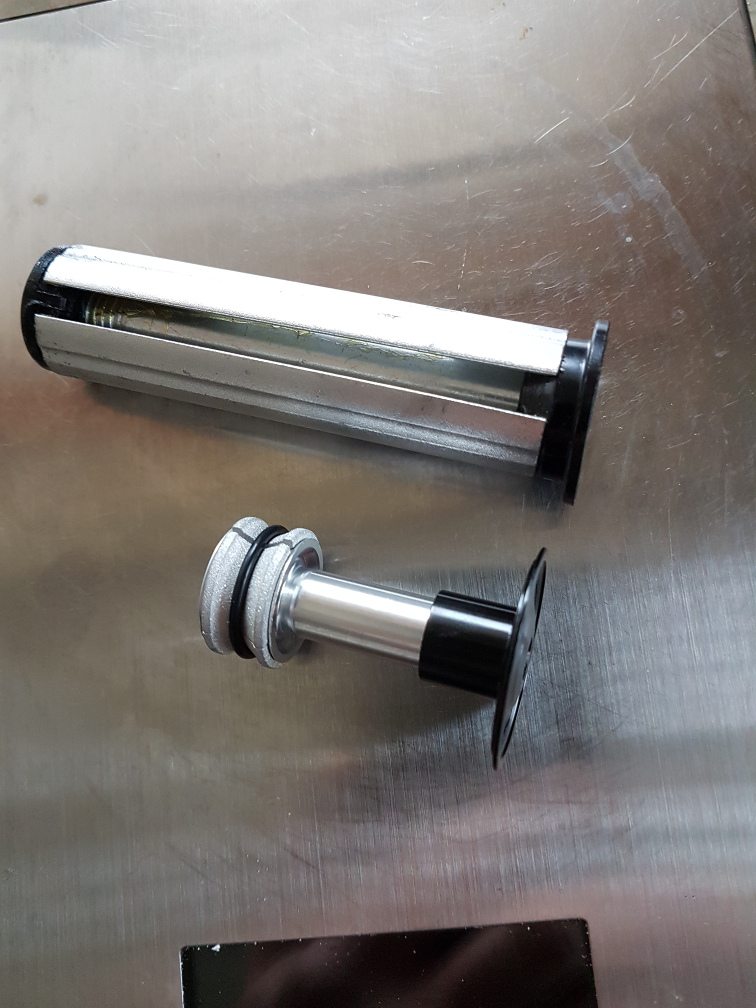 So something I've always hated is the idea of press fit bottom brackets. My C60 was the first frame I had no choice in having press fit but even then it's a semi-fake press fit as you can remove the threadfit system that Colnago fit and put new ones in and start fresh or even just thread in the ceramic speed T45 bottom bracket directly. No such luck with this frame it's press-fit BB30a. It's great to see Campagnolo now make bottom brackets for pretty much every one now including BB30a 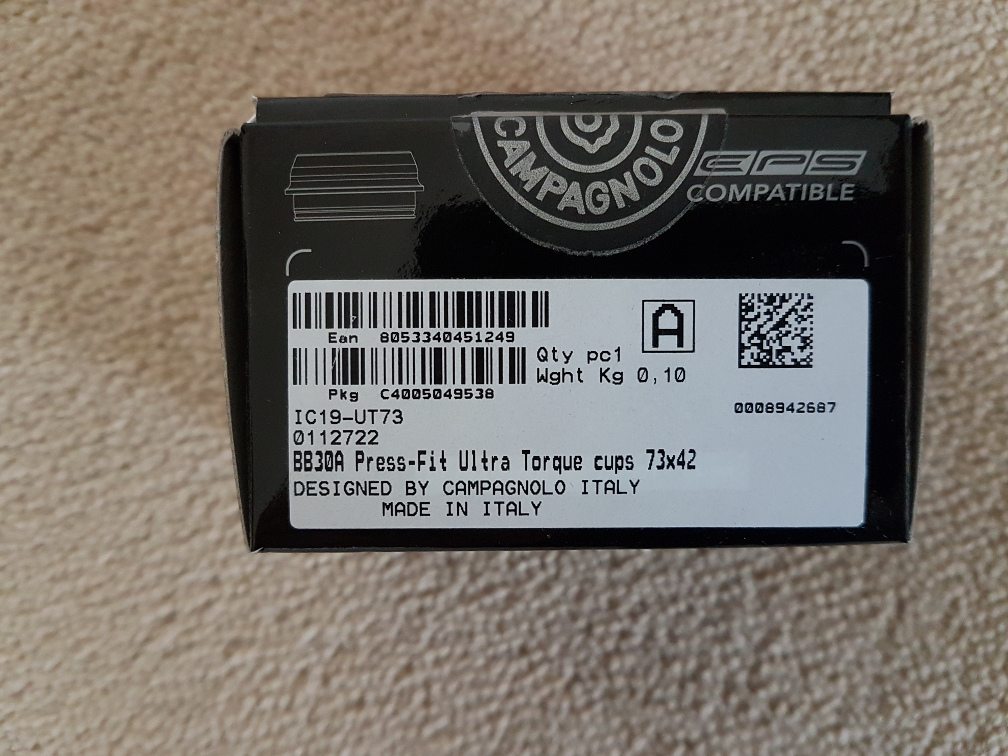 I'd thought before buying the frame that once this is in I won't be planning on taking it out any time soon so I'll be using loctite on this. Even more of a reason to do it is because of some slight score marks I've noticed on the drive side. I've no idea how important or not these are to long term silent bottom brackets as I'm just not experienced at all with press fit.

You can just make them out here 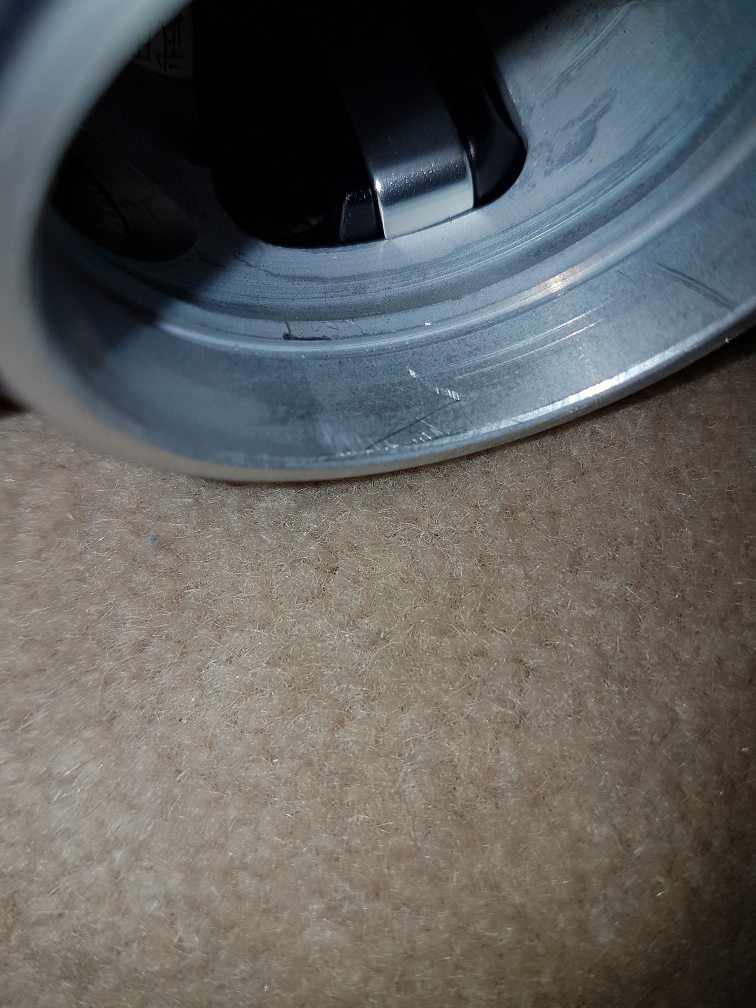 But better on this picture I've closed up on them. The dark diagonal line is one you can feel and as it goes across left to right to the silver diagonal that goes the opposite direction more towards the inside. There's a tiny silver edge there that I will smooth off with some wire wool. I'm guessing loctite will fill the gaps there. 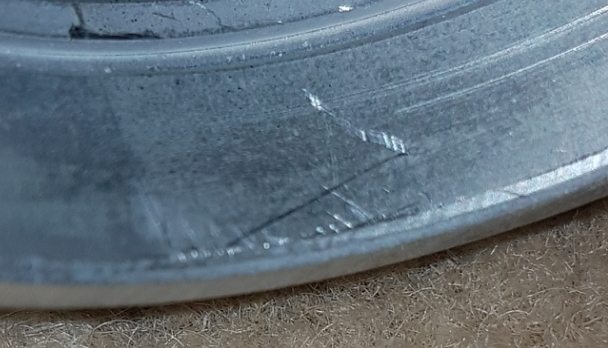 The welds at the HT look pretty good.

I wonder - would it be possible to take photos (without shadows) inside the head tube, the bottom bracket, looking down the seat tube? Would be great to see how clean things look inside, too....

I know someone who has a USB "endoscopy" camera he picked up on eBay for $20... you connect it to your phone and just feed it inside the tubes, watch the picture on the screen. It has a built-in LED light. It allowed him to pick up on some residue left inside his frame due to some sub-par internal moulding on his specialized and actually enabled him to get a replacement frame....
Top

Great Thread and I'm following this with interest as also looking at a Caad13 rim with Campag for next years winter bike as not bought into discs either, I'll be interested how you get on with the direct mount brakes and how well they work regarding modulation and feel.
Top

To correct the reach for the tall top cap, just subtract 3mm for each 10mm of additional stack. This is mistake that many people make when comparing the same frame of two sizes. If one has a 20mm taller stack, then subtract 6mm from the reach of the smaller frame and take the difference. In this case, the 51cm is 1.2cm shorter in reach than the 54cm size. Only a 10mm longer stem would be needed, compared to the 54cm.

I now have 800km on my 12s DM brakes. On Bora, I can't really feel much difference from the 12s skeletons I had before. I hoped they will be more powerful but don't seem so. This is just from flat/ citytraffic usage, unfort no real hills yet. But I don't think they are weaker so apart from the price, weight and ugly bolts I can't really blame Campy much. Though I wish they were a real upgrade for the money. On the plus side, with alu wheels, after the initial ramp up, I can real feel them grabbing and stopping the wheel pretty hard. This is very nice feeling. I don't recall much of that before but i also used those alu wheel very little in the past. A negative on carbon, I often get squeals, even with 0.5mm toe in. 0.7 reduces it, 1mm eliminates it but at that point I also lose a lot of the power from opening them enough no to rub. I don't know if it is the brake or the bike/cable routing inducing the resonance, but same wheels and pads were fine on the old bike. No problems on the alu wheels.
Top

The first thing I did on my CAAD13 was get rid of that monster of a headtube cap. Oddly enough the big cap almost put me in the right position with the stem slammed, but I thought it looked silly. The big problem is that the outer diameter of the headtube is 1-2mm larger than most normal dustcaps, so I have a sliver of aluminum showing when you look directly down on it. I'm not sure if I can get another with the right size, but I just used a spare I had laying around.
Top

Nice
looking for a caad13 too for travel , high end commuter, ultra endurance bike
Wonder how denting has evolved
COnsidering it's the same weight as caad12 according to cannondale ( probably a bit heavier in reality )
but more tubing forming aero shaping etc

DaveS wrote: ↑
Fri Jan 10, 2020 12:36 am
To correct the reach for the tall top cap, just subtract 3mm for each 10mm of additional stack. This is mistake that many people make when comparing the same frame of two sizes. If one has a 20mm taller stack, then subtract 6mm from the reach of the smaller frame and take the difference. In this case, the 51cm is 1.2cm shorter in reach than the 54cm size. Only a 10mm longer stem would be needed, compared to the 54cm.

That's good for the same frame of two sizes but not when you're comparing different frames from different manufacturers and even more so when you haven't got a geometry of the frame you're trying to compare it with. So for this once I've set my saddle height, which is identical on every frame, measure the height from the floor to the centre of the bars and then measure the distance from tip of the saddle to the centre of the bars. It's the easiest way without being too scientific about it to get my bikes set up close to each other. I'm not fussed within a few mm here or there although I appreciate some want mm precision.
Top
Post Reply
74 posts