The Cannondale steerer compression thing looks a lot like the FSA one. Doesn't help you with alternative top caps though.
Chasse patate
Top 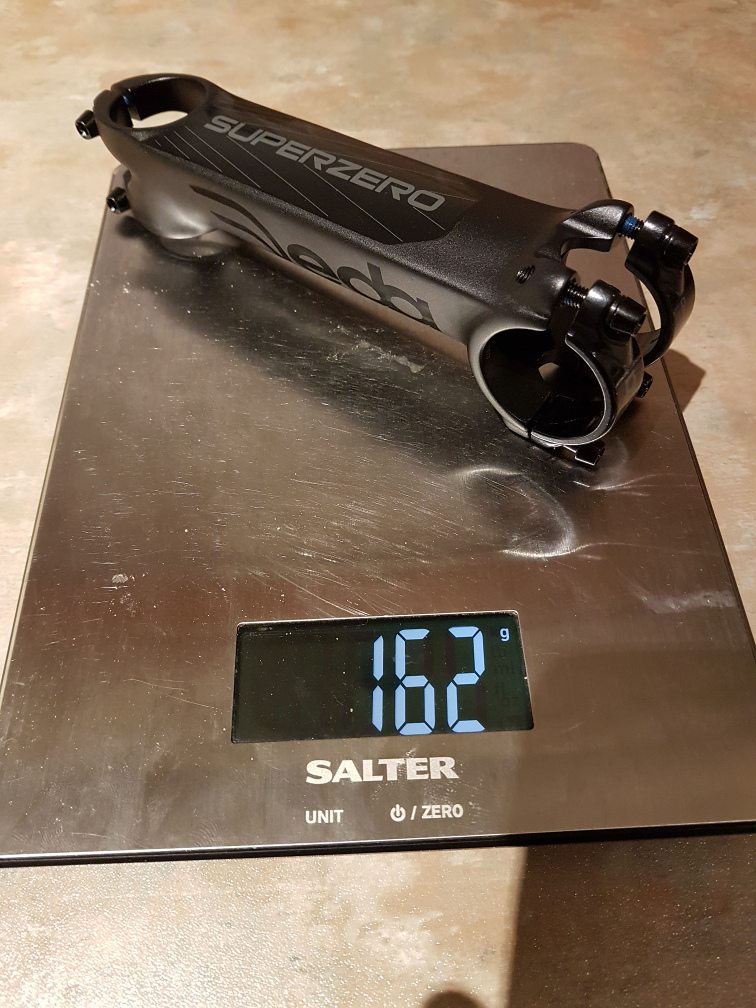 Comparing post 2015 SR ergolevers bought from 3 years ago and the brand new ones I've just bought I expected to see no differences however the brake hoods have been modified with a bit trimmed where it meets the bar tape and bars along with more of a cut out for the inner lever. 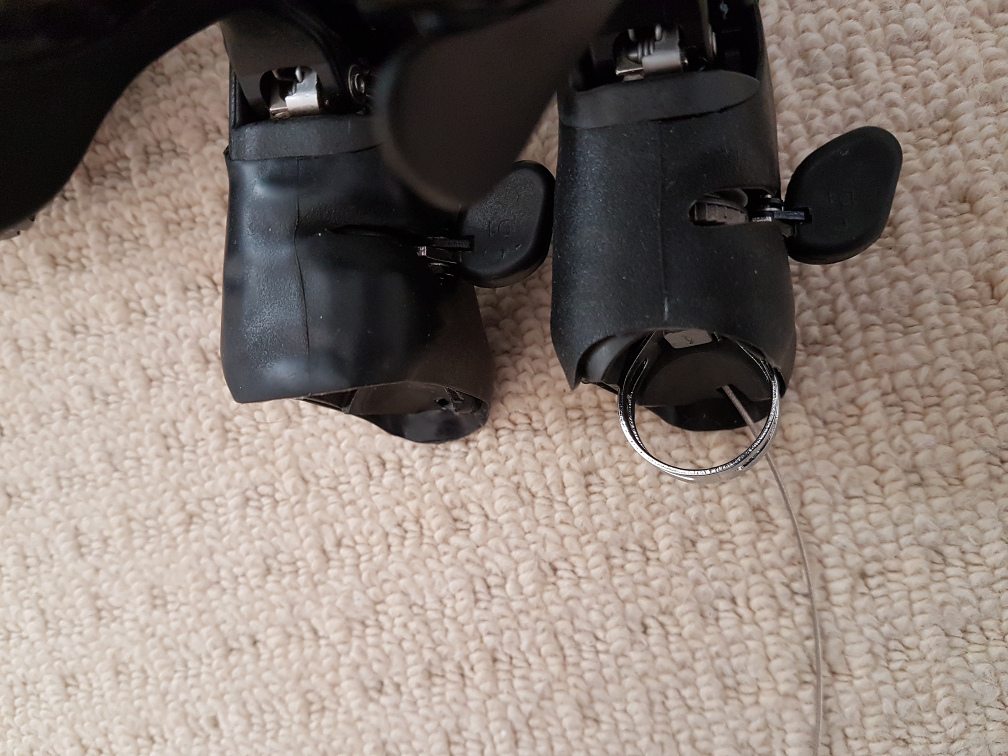 Are these the newer hoods with the white Campy writing?

With 12s Campy's actually gone full circle and those hoods are more like the pre-2015 11sp ones.
Top

Actually these hoods are both post 2015 with the white writing so they've modified them somewhere along the way. Everything else appears identical.
Top

They are interchangeable but some of the early pre-2015 levers didn't have a hole in the body of the lever that was required for later brake hoods. You can either cut the tab off or better, which is what I did, was to drill a small hole in the lever. It just makes the hood a bit more secure on the body. Later pre-2015, when they started to put colour on the levers to denote SR, R and C models, was when the extra tab appeared I think. My pre-2015 R11 levers have the tab but my original 2009 11 speed SR do not. If you buy pre-2015 hoods or post 2015 hoods they all have the tabs on now. Or at least the ones I bought did.
Top

All of the above is correct. I've also never had a set of pre-2015 hoods show up without the tab (I mentioned the part number above).
Top

The build is pretty much done aside from a bit of tweaking the brakes and headset adjustment. Everything is set up other than the mudguards that I'll do in a few days. 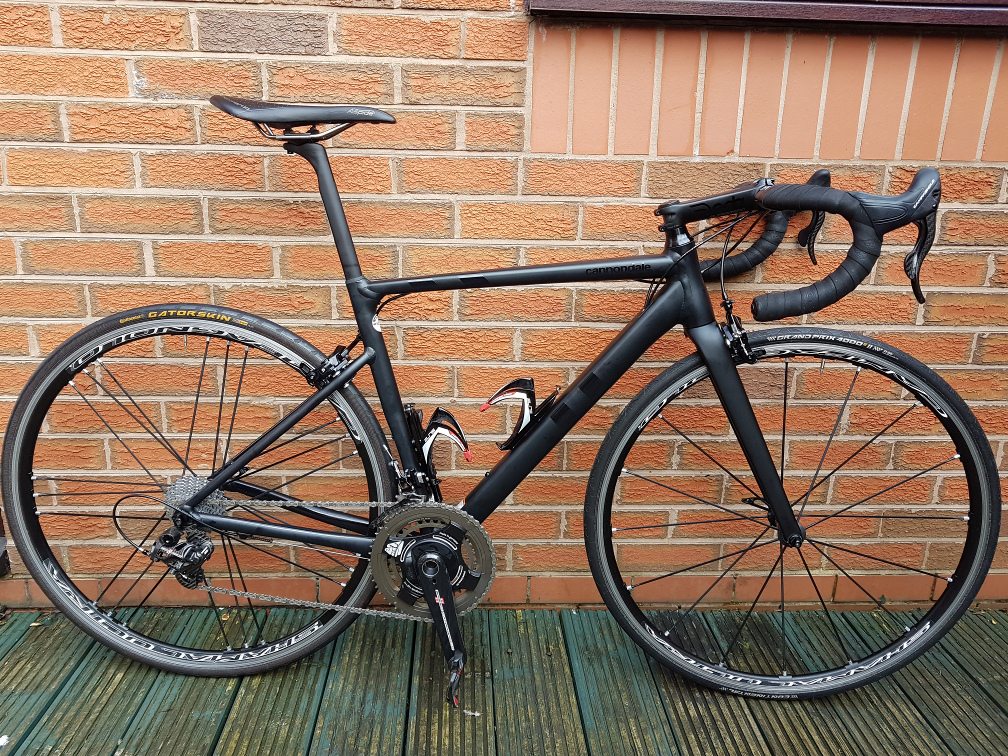 For the observant I have mixed tyres on it. The rear is a 25mm Gatorskin whereas the front is a 23mm GP4000 as I have a few of those spare. The bar tape is double wrapped below the ergolever. The bottle cages wouldn't be my first choice colour for this frameset but I took them straight off the previous disc build.

The build overall was really quite simple, certainly in comparison to the horrid disc build it's replacing, though there are a few gripes I would say that I'll document.

The first is the cable routing. I cross the cables through the downtube so as to get a nice smooth curve from bar down to where it inserts into the frame means that the right/rear gear cable inserts into the left frame entry point and vice versa. It always looks a bit awkward where they're doing the combo of electric junction box or mechanical gearing on the downtube but it tends to work out ok. But the way Cannondale have done this is a mess. The first issue is the design of the plate attaching to the frame. You can see the left and right holes are different. The cables insert the same distance as you can just see the edge of the chrome cable guide and it's level with the right one. But looking at the side profile reveals a lot more. They insert at different angles. WTF!!!! 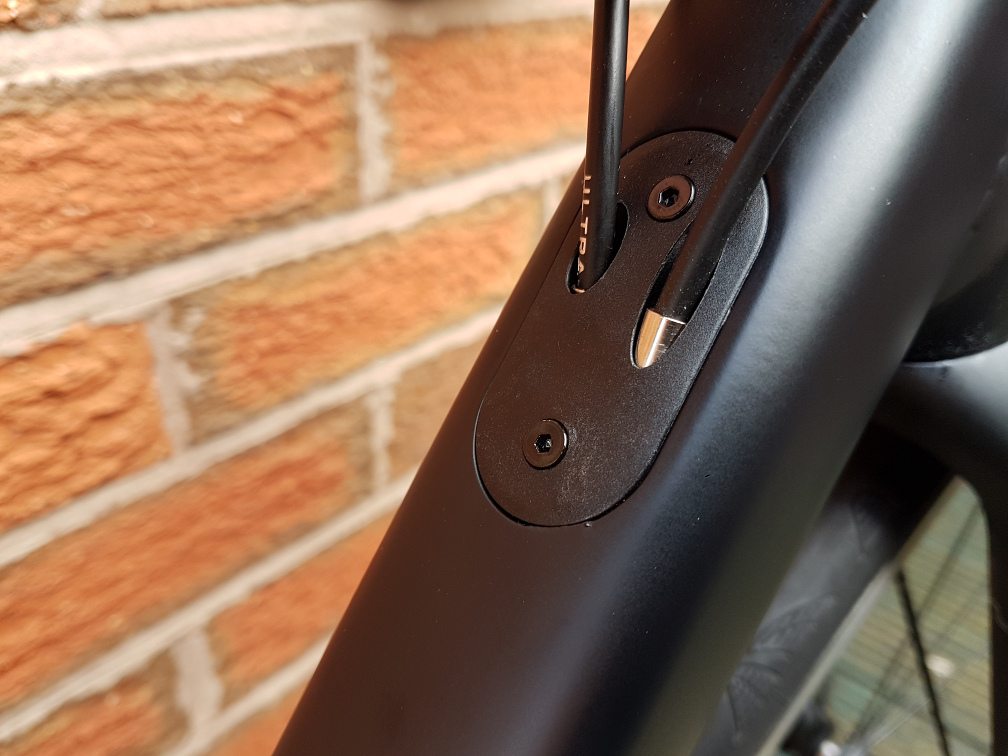 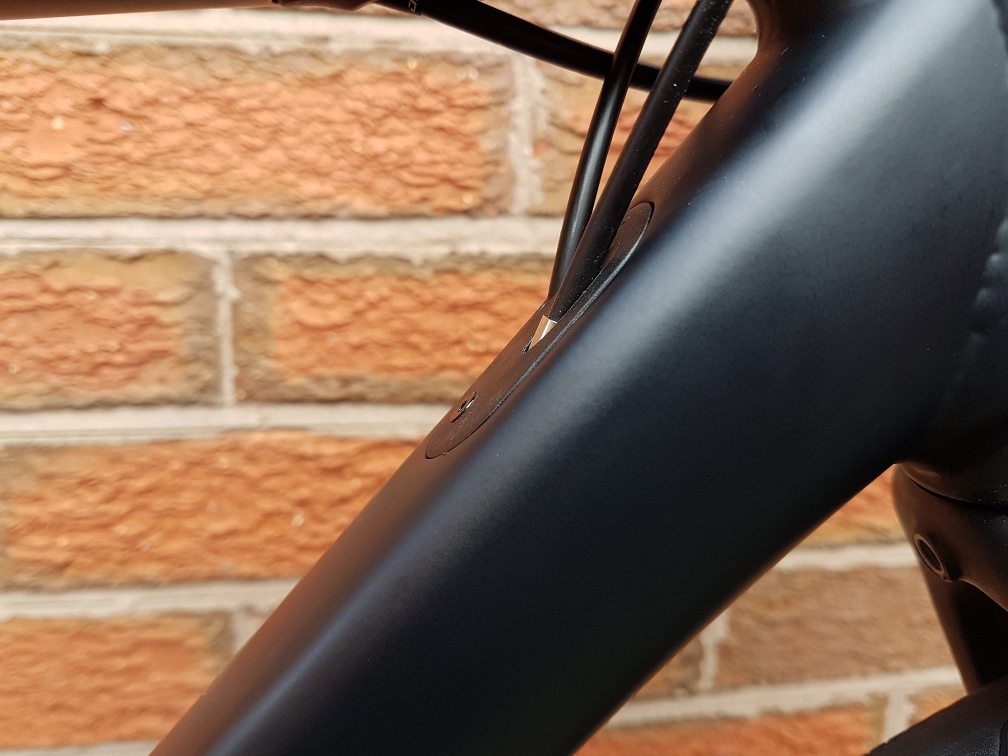 Ok that's not a big deal in itself but what it results in is being unable to get an equal/matching curve of the left and right gear cables. This kind of thing annoys the poop out of me! But there are other issues with the cable routing.

The rear brake cable enters the top tube in the centre underneath. OK that's fine because it means whether you have left or right lever going round to the rear brake it enables you to have a nice curve. Normally frames tend to have the entry on the left of the top tube meaning an awkward looking bend for left brakers going to the rear. But the issue here is no matter what I do with the cable it interferes with the left gear cable! I've tried ever routing option. Bending left gear cable to left housing, looping the brake cable the other side of the gear cable. The issue is it needs to enter the top tube at a very specific angle and so you're left with this compromise. 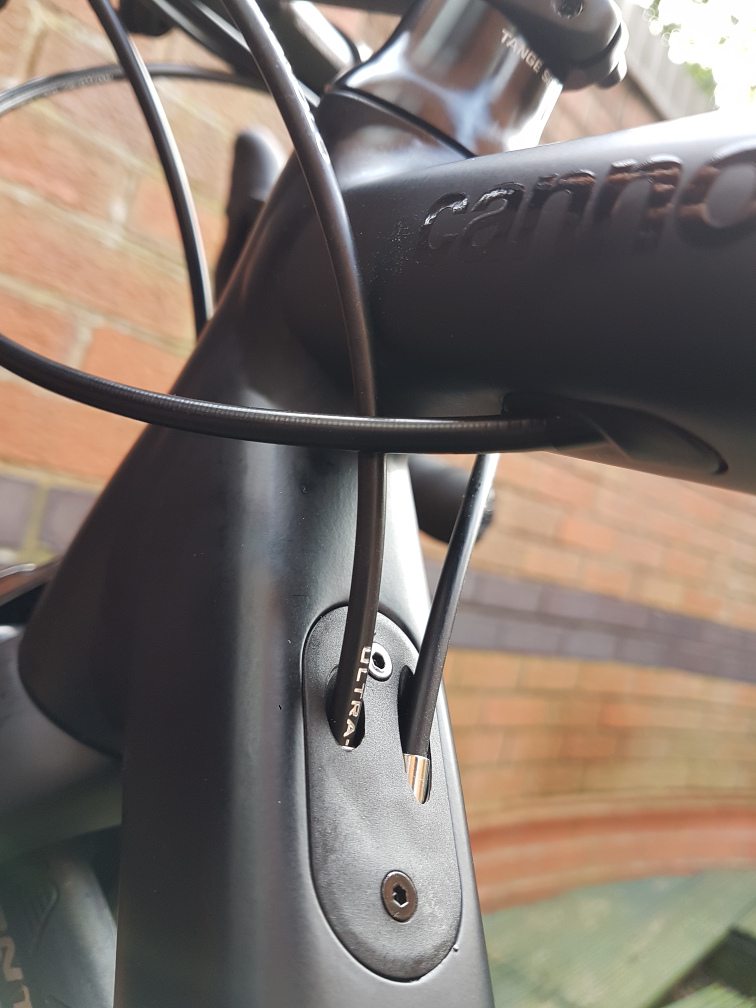 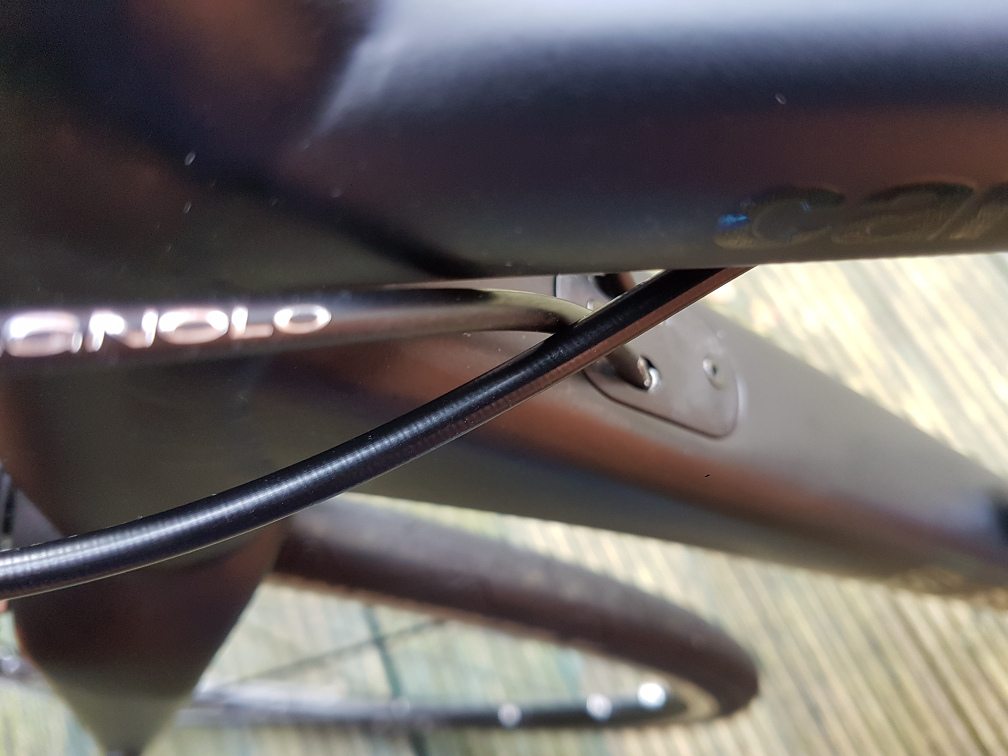 Now onto the ugly rear end! This also exits the top tube underneath. Why? Are there any brakes on planet earth that someone would use on this bike where the cable needs to run to the right of the seat tube? The picture from the side view gives the impression that it should have a bit less cable to get a smoother curve. But it's not just sweeping down it has to sweep outwards and that's increased again when the brake is activated. But it looks a mess when it's in a relaxed state. I've tried three different lengths here and this is the one that gave the slickest braking feel.

So my feeling overall is that there was some really careless attention to detail when it came to this size frame (51cm). Bigger sizes will get better and better as the top tube is elevated up away from the junction box and rear brake but it's poor. 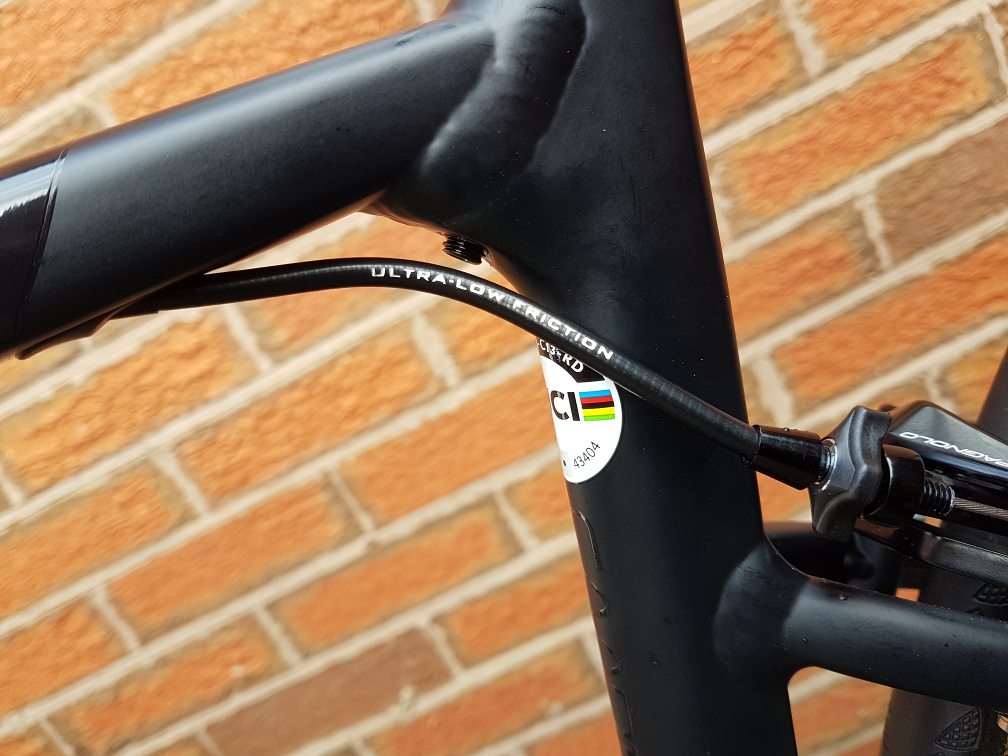 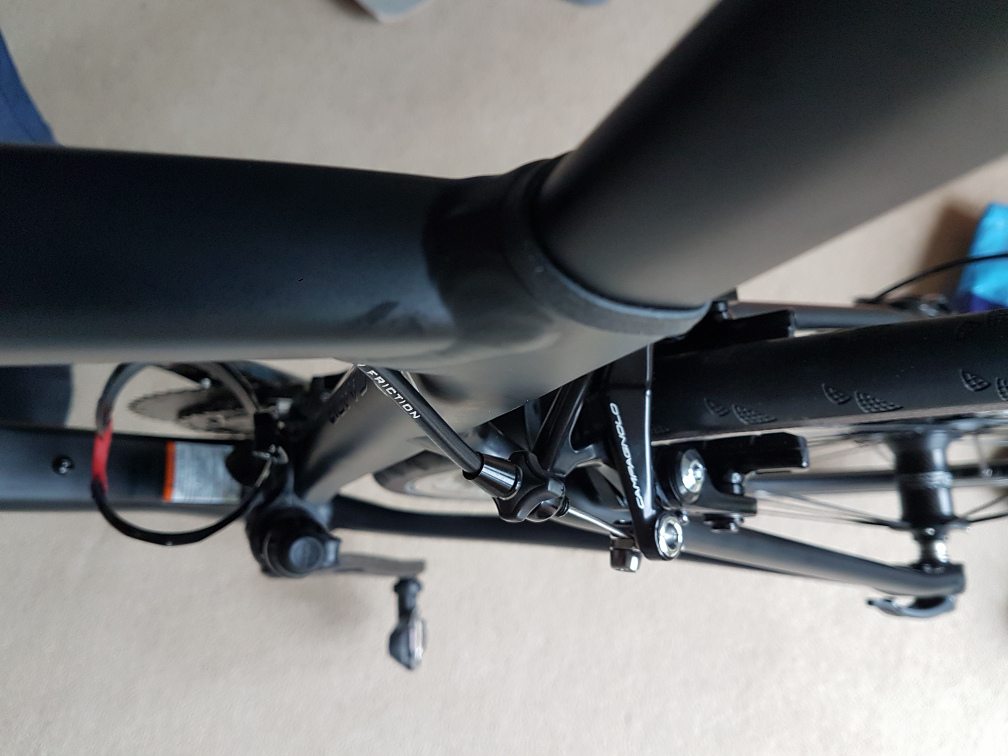 Next! The rear brake requires this bridge to be attached (yes I need to swap it to the other side of the stays). Why isn't it an integral part of the frame? If it's got to be there just have it there in the first place. And while you're at it put a mudguard mounting point on it. At the moment I'm still waiting for Cannondale to come back as to what you do with a mudguard here. The disc brake bike has an adjustable mudguard mount that screws in at this place (as per the pic below). This part does not fit to the rim brake version. So what part does? I've not seen one rim brake CAAD13 with mudguards while I've been searching online. Are you on here Cannondale??? What's the fix. Tell Sigma to then tell me what you do. 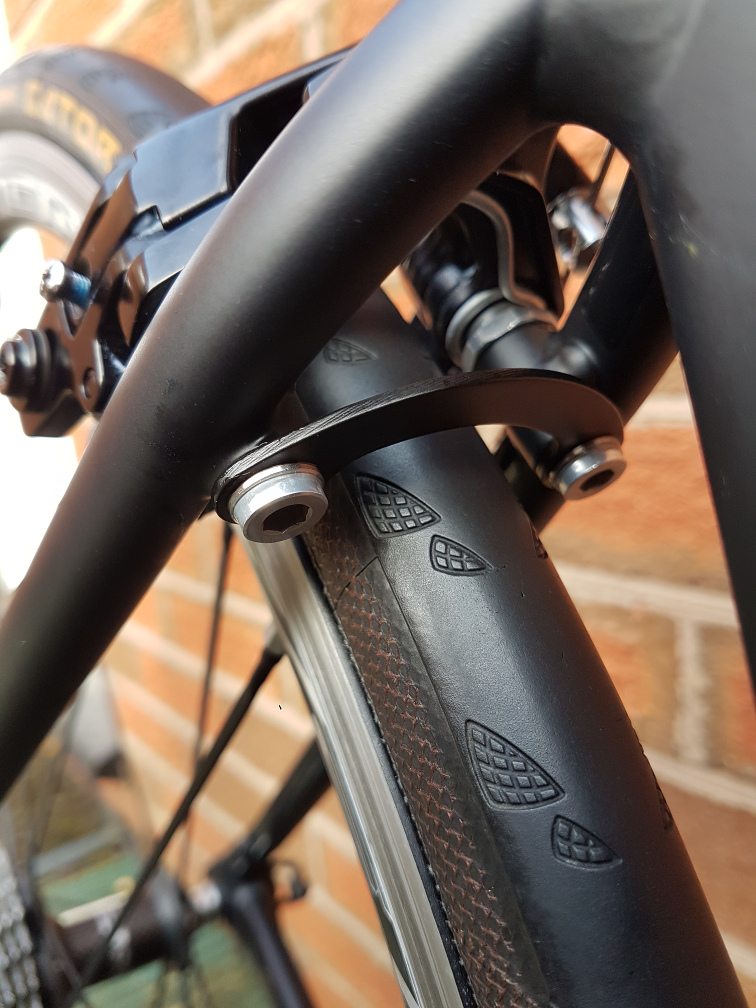 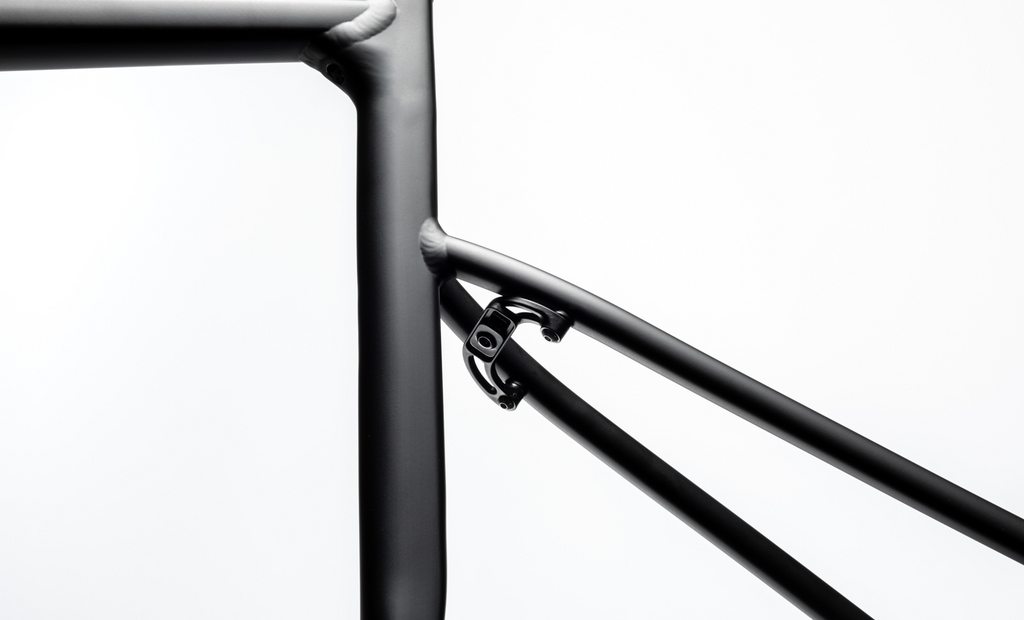 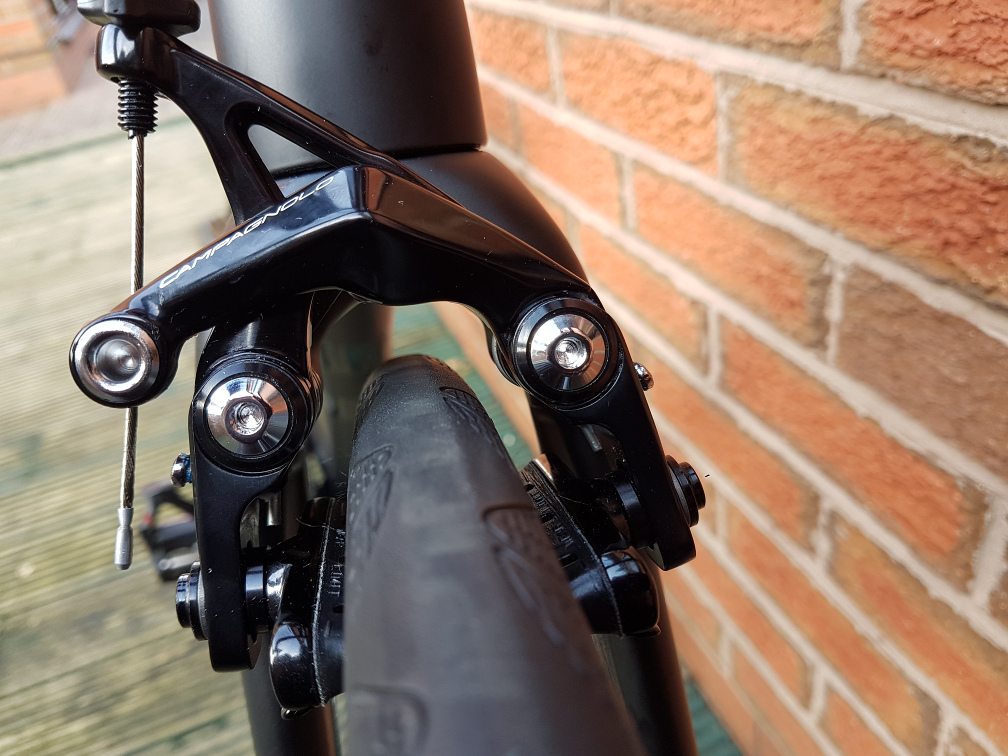 Clearance for rear you can see is limited by the brake bridge so I don't think I'd want to go bigger than a 25mm with mudguards on this. 28mm may be possible but I'm not running that. 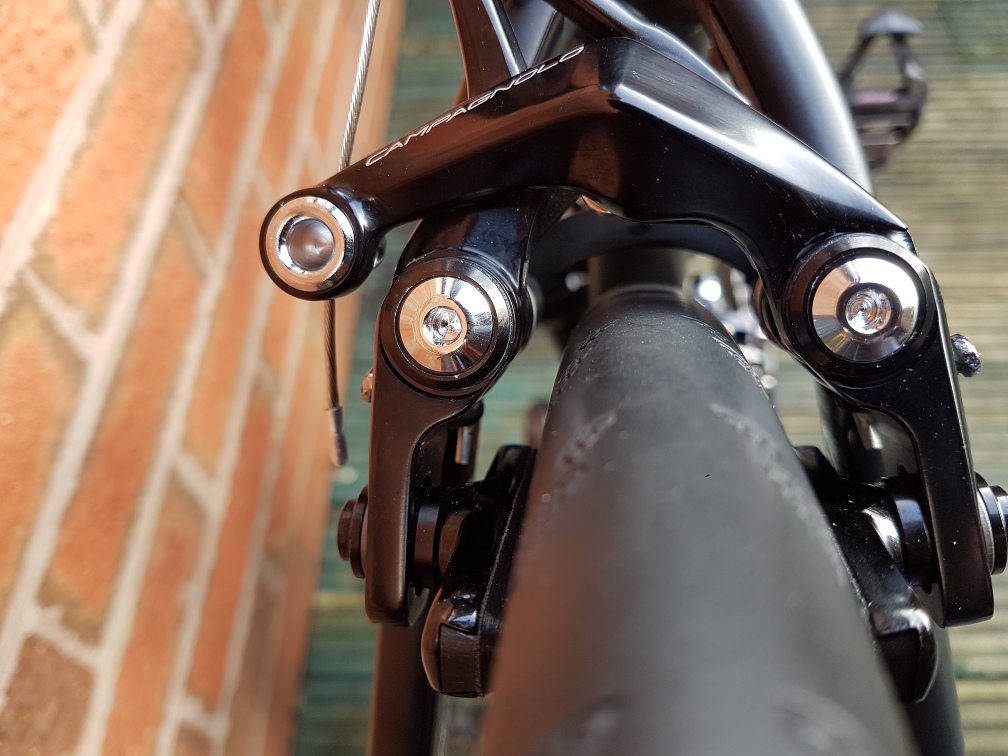 While we're on brakes, Campagnolo, please sort this out. Why are you putting these pathetic little screws on to adjust the pads. It's a similar screw to the B screw on the rear mech. With these they've got a huge blob of blue paint on as threadlocker so it's quite tight to adjust and so easy to slip off and start rounding the thread. What's wrong with an allen key head??? 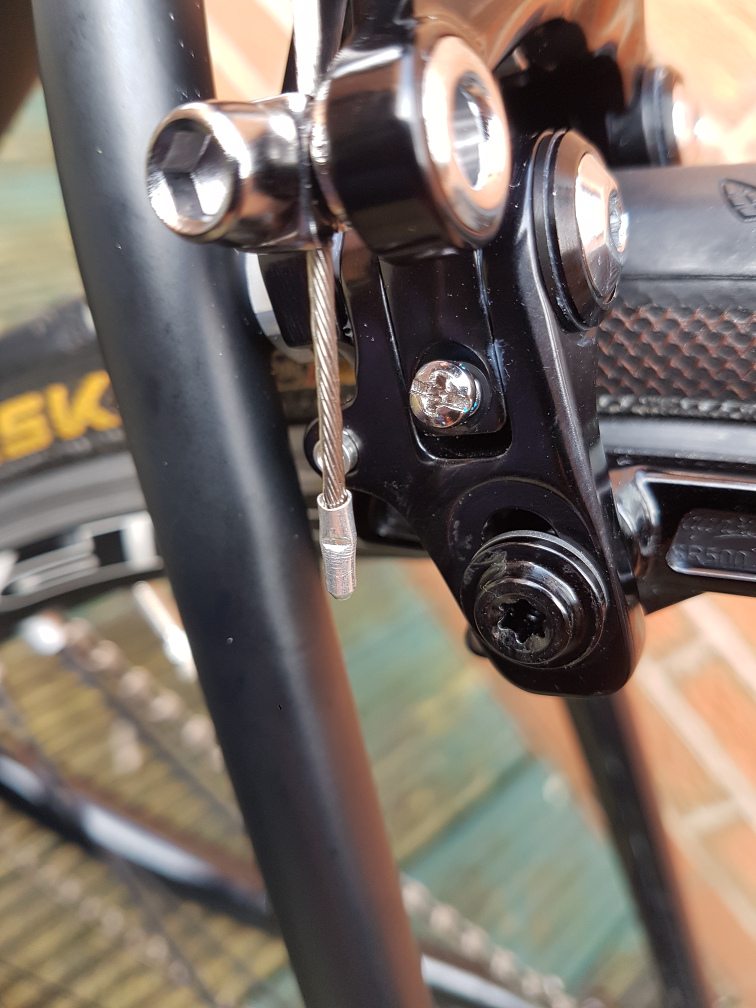 Final gripe/issue is that pesky conical top bearing cover. What's interesting to note is that if I buy the complete headset for this frame as a standalone item K35098 https://www.cannondalespares.com/Cannon ... il/3-44770 it appears to come with a 5mm top bearing cover alongside this huge 25mm thing. So I questioned it. Apparently no they do not supply the lower top bearing cover. But there doesn't appear to be anywhere you can buy it. It may be the same as KP253 but why should I be buying that when it should be supplied with the frameset. Again I'm waiting on Cannondale on this but it effectively raises the stack by 20mm. 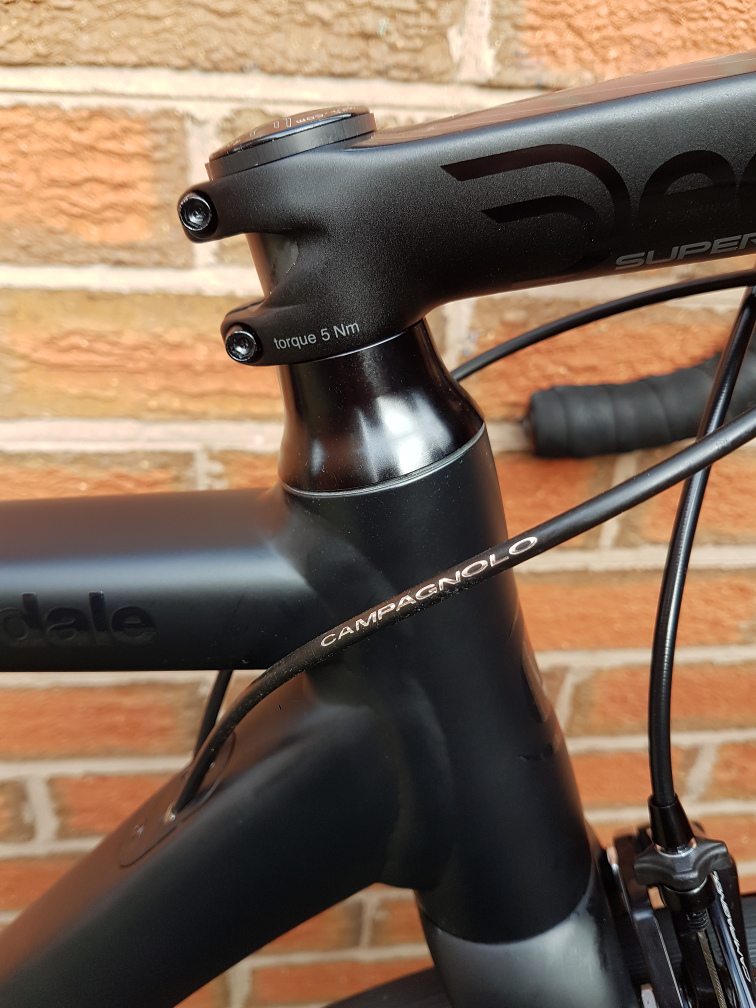 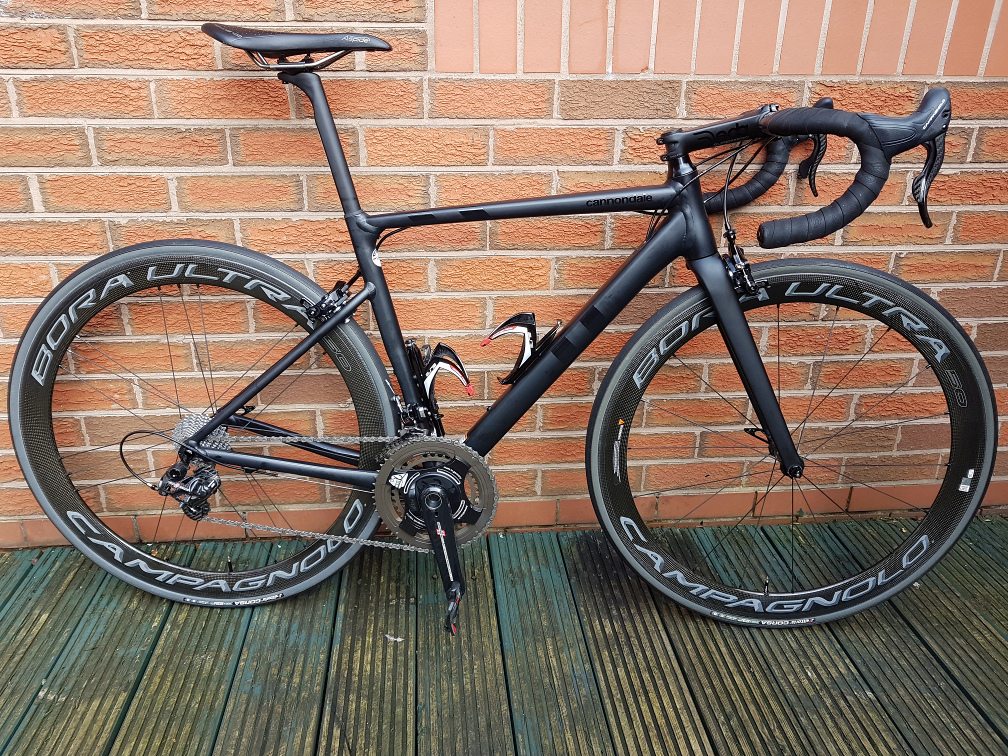 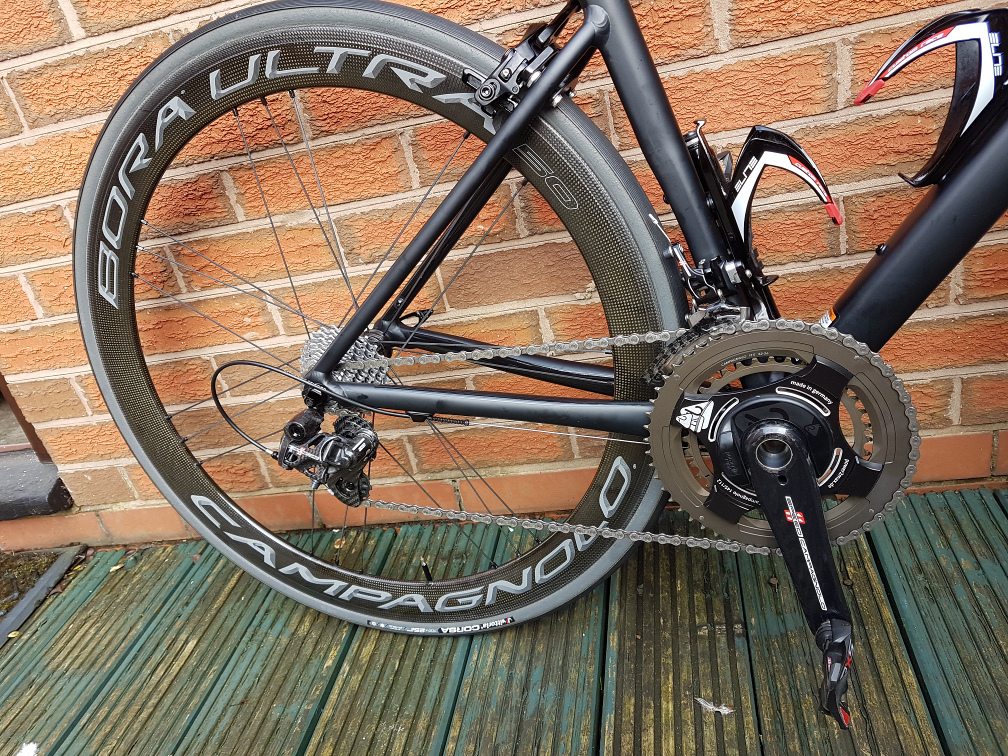 And nearly forgot overall weight is 7.4kg with the shamal ultras and mudguards to be added.
Top

I have a disc CAAD13 and immediately replaced the bearing cover. Unfortunately the headtube is about 1mm larger in diameter than the 2 bearing covers I had, so I now have a small aluminum ring I can see. Ironically, slammed with the bearing cover is about where my position is, but I thought it looked silly so I'd rather have a spacer or two.
Top

That frame is too small for you.
Great photos btw.
Top

Aside from that, wicked build!!
Top

The 5mm topcap is available from Cannondale. A colleague helped a dealer/customer with it the other day. Will try remember to check for the article number tomorrow.
/jonas l
http://cerrol.wordpress.com (my cyclingblog)
Top

Great build write up!
Whats the feel of these Campag direct mount brakes like? Are they easy enough to set up?
It seems like a custom fabricated rear brake bridge may be required for optimal rear mudguard placement, perhaps it would allow greater clearance than the Cannondale supplied version?!
Whilst there looks to be good height clearance under the calipers, the width at the mounting bolts looks narrow so perhaps some mudguard trimming may be required at this section?
I'm considering a Cadd13 for winter 2020 riding for many of the reasons you've bought one, so this is a great thread for me. Thank-You!
Top
Post Reply
74 posts