Hi
is there any advice about torque for pf30 campagolo cups? I watched instructionals videos made by Campagnolo and it seems they just torque them until they "touch" the frame.
Is it the right way to do or should I get them tighter? (if so any clue on NM? I'm using marine grease instead of loctite)
Thanks!
Top

It's pressfit, not a thread, so nm has nothing to do with it.

Edit: don't use grease, don't need to aid it in movement, you want it stop moving
Top

gipogipo wrote: ↑
Sun Sep 22, 2019 9:34 am
Hi
is there any advice about torque for pf30 campagolo cups? I watched instructionals videos made by Campagnolo and it seems they just torque them until they "touch" the frame.
Is it the right way to do or should I get them tighter? (if so any clue on NM? I'm using marine grease instead of loctite)
Thanks!

The loctite is to AID in the cup being affixed to the frame.
Marine Grease, or any grease will aid in the cup getting loose.

If the cup becomes loose you may start hearing creaking or clicking coming from the bearing cup areas on one or both sides.
Top

The press fit tool you just tighten up until it feels tight there's not really a way of applying a torque to it and no need to. It's not going to unscrew or just fall out (or there's something wrong with the frame!) so as the video says just press it in until it presses up against the frame. You're not trying to crush the bottom bracket shell. Generally a dry install should be fine for a bottom bracket which is what I originally did on my C60 nearly 3 years ago. This year I started getting a creaking from it so removed it, cleaned everything up and installed with waterproof paste. That didn't help a lot so did the loctite method and it's been silent since.
Top

Yes, as was said, you want to press the cups in until they touch the frame. Unforunately, with pressfit frames and no threads, you really have to rely on the manufacturer to have ensured that the edges (faces) of the BB shell are perfectly square and parallel to each other. With threaded shells, there are bushings and facing tools that allow you to face the shells (in most cases) so that you are 100% sure that the square/parrallel condition has been met. And then, when you thread the cups in, the thread pitch is loose enough that it allows the cup flanges to seat against the parallel BB faces when tightened and voila... perfect spin. But with pressfit, you press the cups into the shell until they seat against what you hope are perfectly square and parallel faces. A good press and a proper bore in the BB shell will bascially do the same thing, and if you have such a press, then I'd put more reliance on that than the actual faces of the shell. What this means is that you want to press the cups in so that they are in all the way, but not "overtighten" them, which might skew them a bit if the BB faces aren't perfectly square and aligned and the cup flanges try to seat themselves against that instead of following the bore. Hope that makes sense. But no grease. Either dry or use a retaining compound like Loctite 609 plus primer. You don't want those cups to be moving against the BB shell once installed.

Here's the Campy press for their ultratorque cups which, while I have other good presses, the Campy one is just so beefy and the drifts are thick and fill the entire bearing cavity in cups. It's hard to press them in anything other than straight and parrallel with this press. 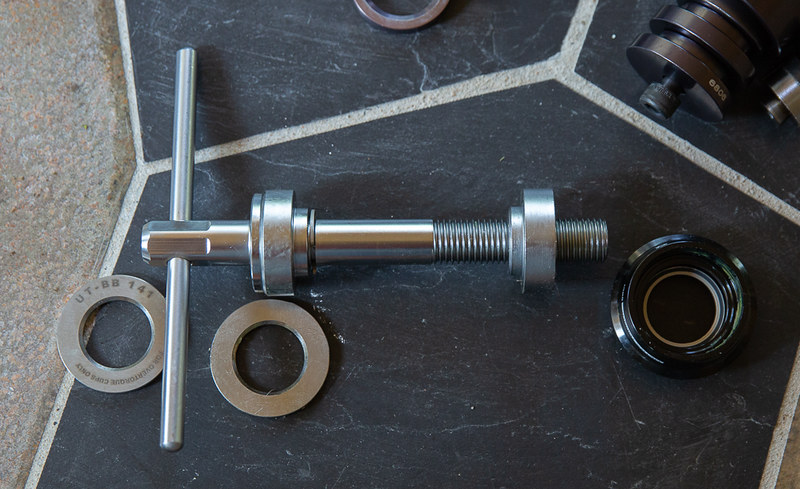 I am very late, anyway: thanks!
It seems very difficult to source loctite 609 and expecially 7649 in small quantities (i just need to work on my bb), so i was thinking about using only morgan blue aquaproof, no loctite, no primer, as your advice in some other post i read in this board: any thoughts?
Should I use only loctite 609 without primer will it bond? Will it bond too much?
Thanks!
Top