I wasn't able to find many in depth reviews on the Berk Dila so I took a bit of a gamble purchasing it and also having the bridge custom painted to match my bike. I heard many good things about Eric from www.elitevelosolutions.com so I tried my luck with him. He was always prompt in answering questions and kept me up to date with the status of the saddle. There was a little delay in receiving it not on Eric's part, but it wasn't too bad. I had contacted Eric long time ago when the Dila 160 came out and Eric felt it would be too wide for me so I dropped that idea. When I heard about the 140mm I made the purchase. For whatever it's worth I'm 148 lbs and my sitbone width is 109 mm apart. I'm 5'7 and on a size 52 cm frame. This is the round rail version. I can't really tell if this saddle dampens vibration more than the PRO Stealth as I didn't really pay attention to that and is hard to compare.

My saddle came in at a nice 105 grams 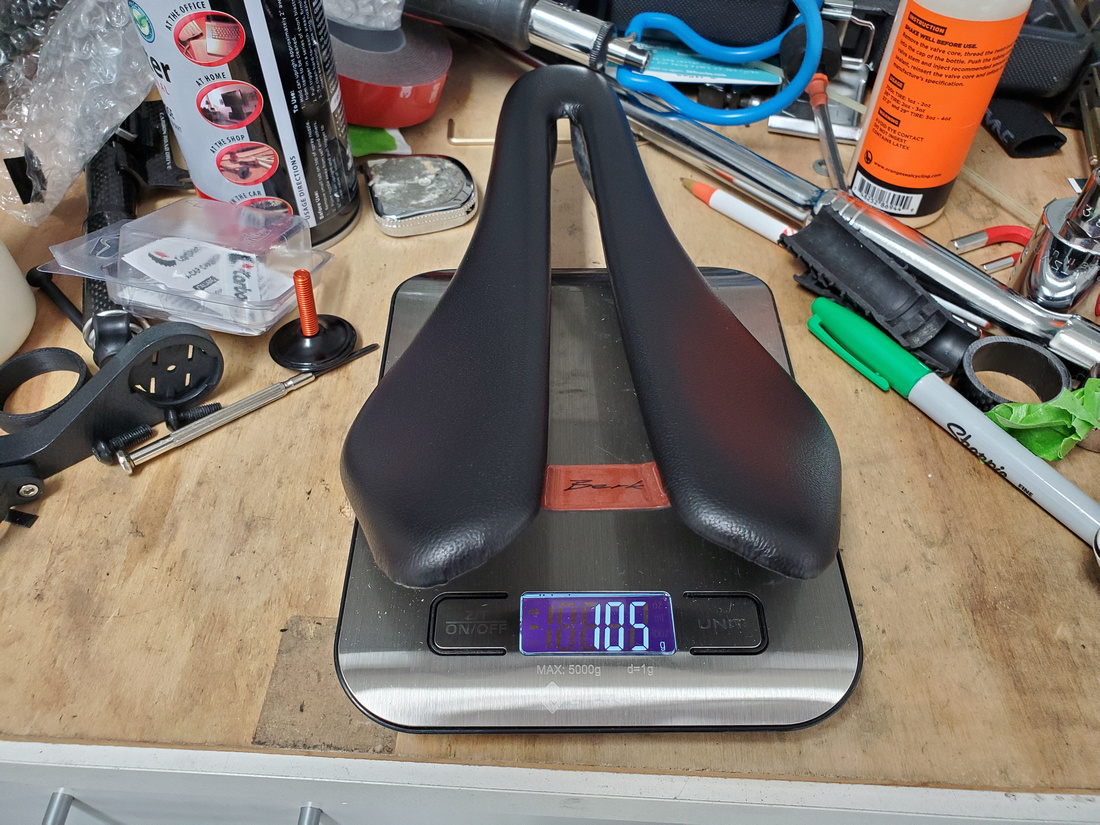 I had Berk paint match the bridge to the bronze accents on my Wilier Zero.6 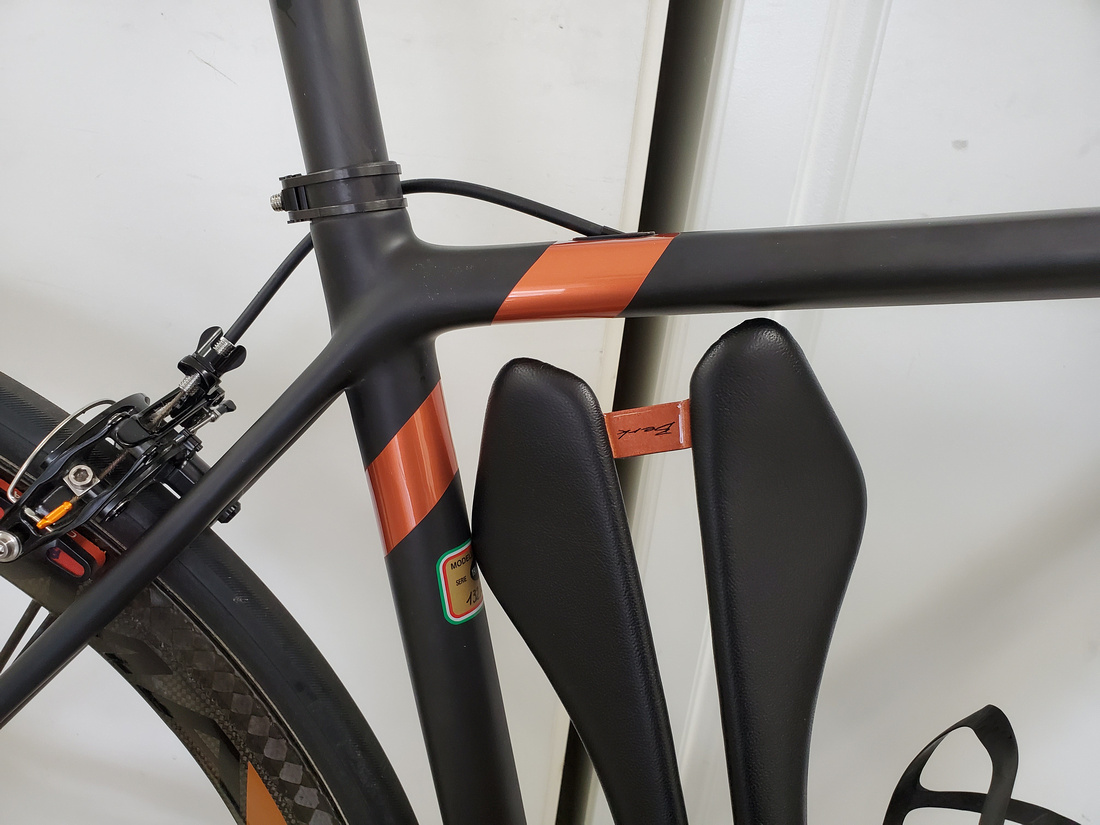 A few photos on the bike 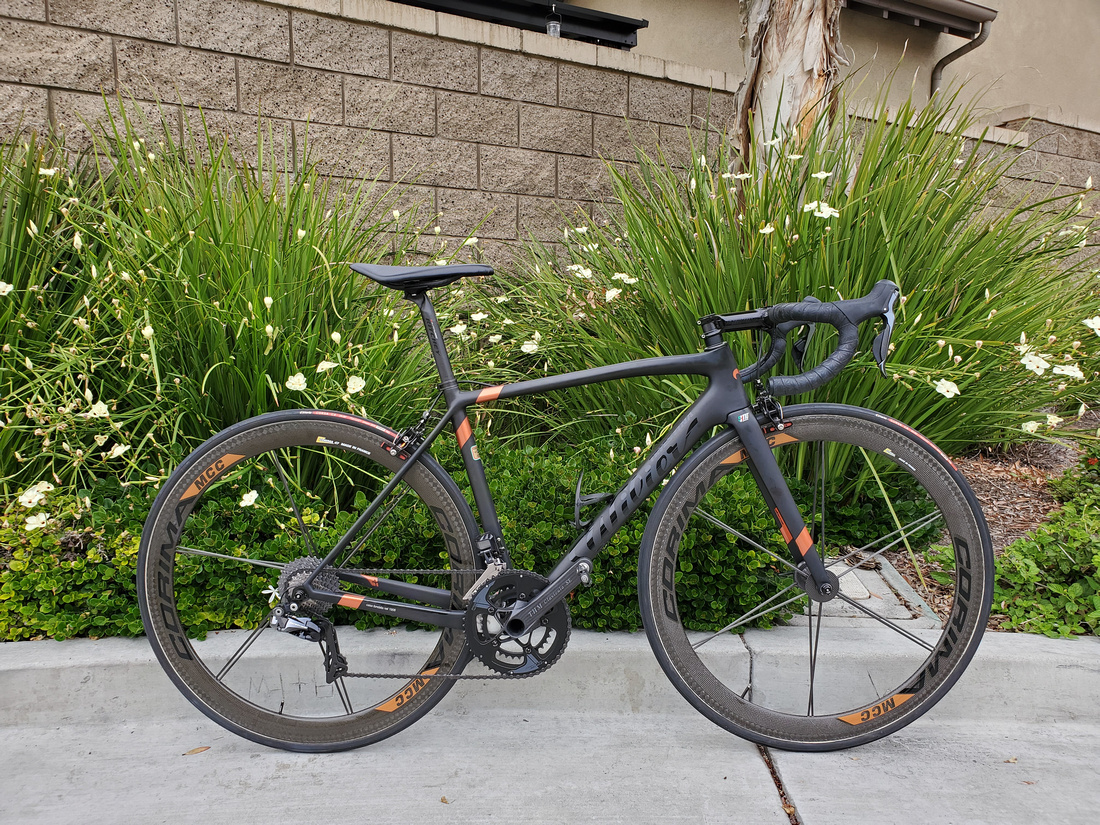 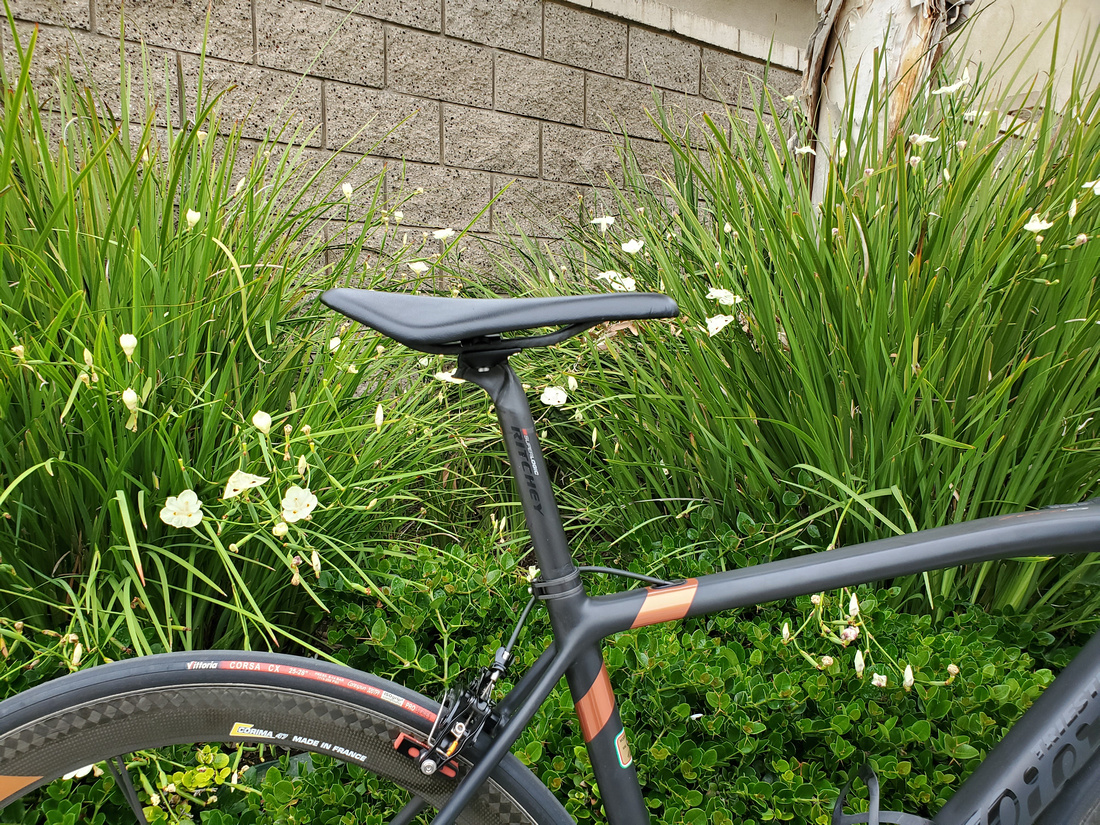 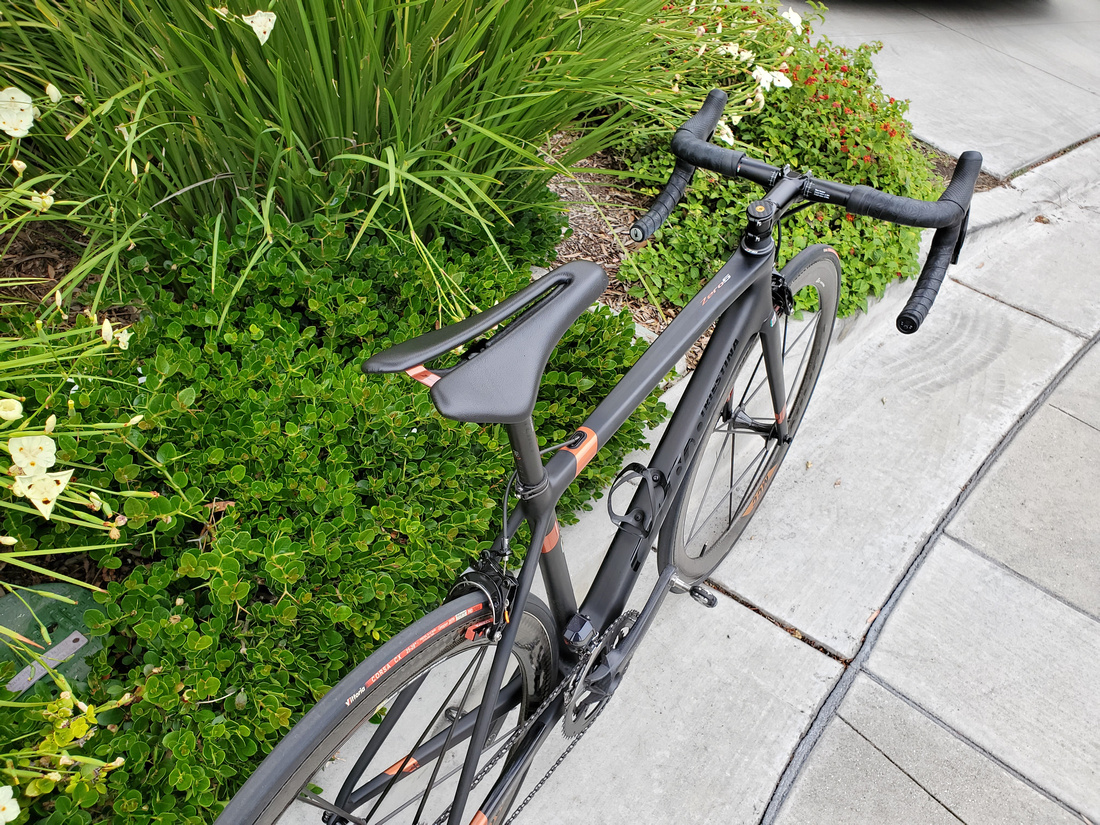 Now onto my thoughts of the saddle. I will be comparing it to the Shimano PRO Stealth saddle a lot since that's my favorite saddle before the Berk. It was hard to find a straight side shot of the saddle before I purchased it so let's start with that. 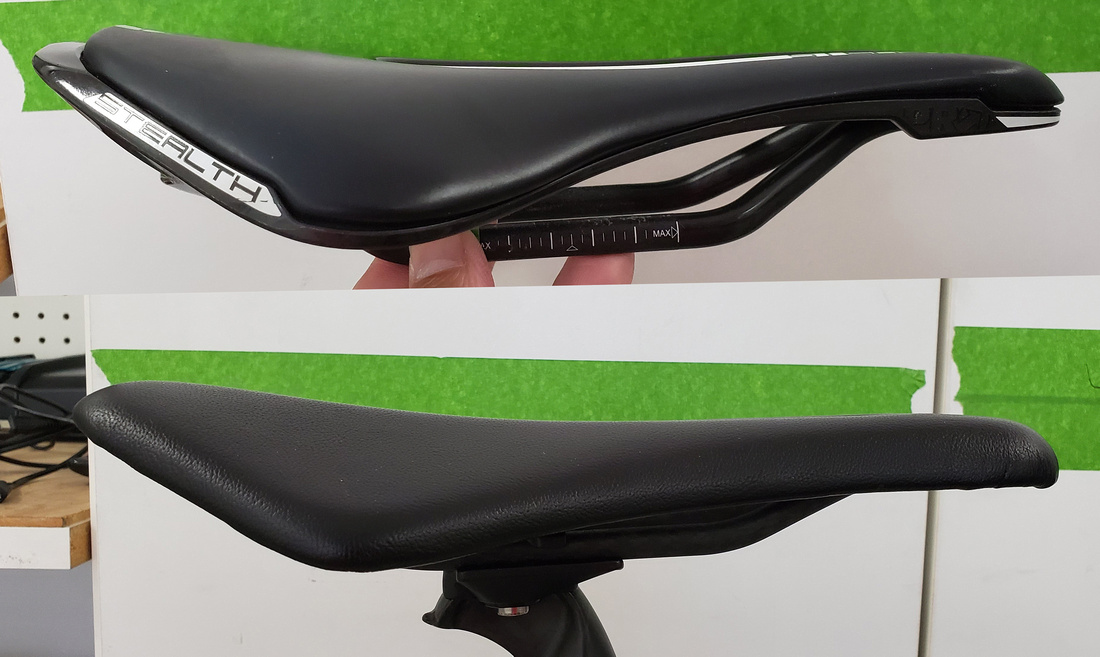 I tried to angle the saddles in the photos as close to how I have them leveled on the bike. On the Pro Stealth I had the nose slightly higher, but the area you actually sit on pretty much level. This created a very nice stable cradle for the hips. Even though both saddles have a scoop at the rear, you definitely feel it more on the Pro Stealth which I personally liked. I'm curious why saddle makers don't make the actual part your sit bones are on level with the ground instead of sloping down which I would think makes you slide forward. Anwyays it isn't really an issue. You sit much further back on the Berk Dila than the Pro Stealth due to where the flare on the sides starts. This creates an issue for me because with the Pro Stealth and a -15 mm offset seatpost, the seatpost clamp winds up pretty much in the middle of the rails, where as on the Berk Dila I have to push the saddle all the way forward. I guess that's an excuse to buy a 0 offset seatpost.

You can see in this picture. The redline is about where my sitbones would be and you can see how far back on the rails it lines up with 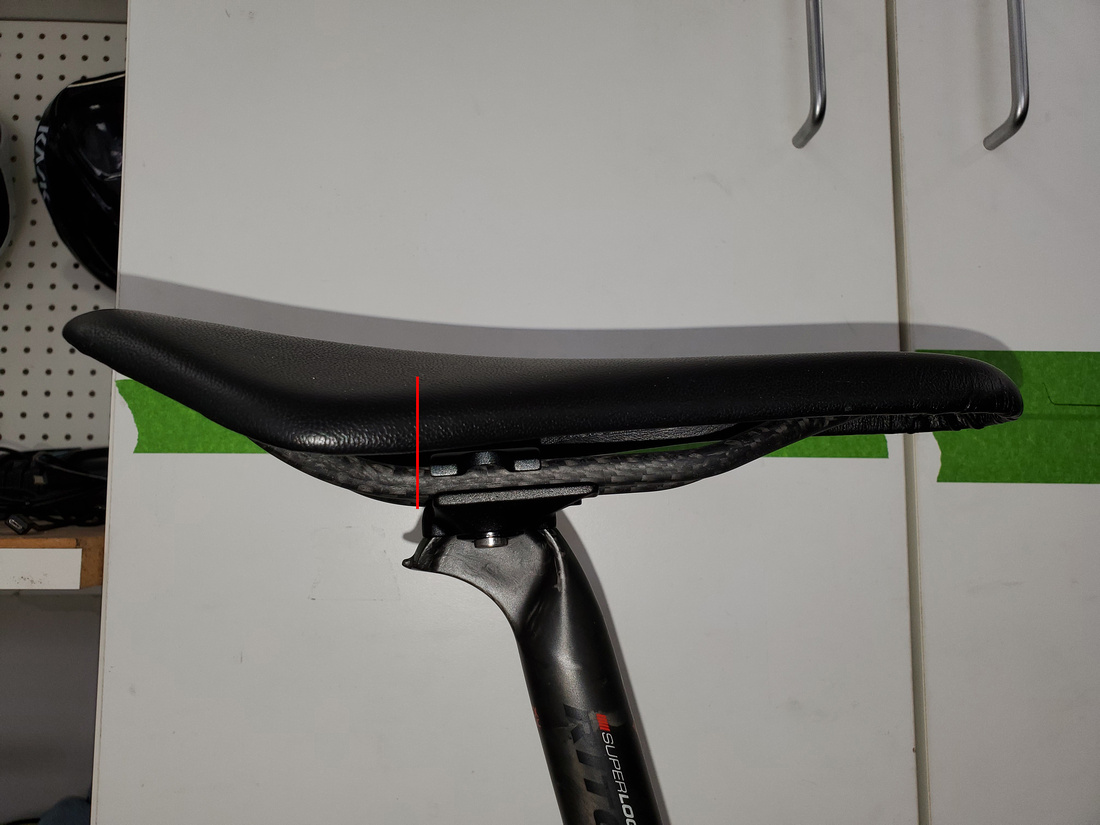 Where as on the Pro Stealth to get the same position the clamp winds up here. 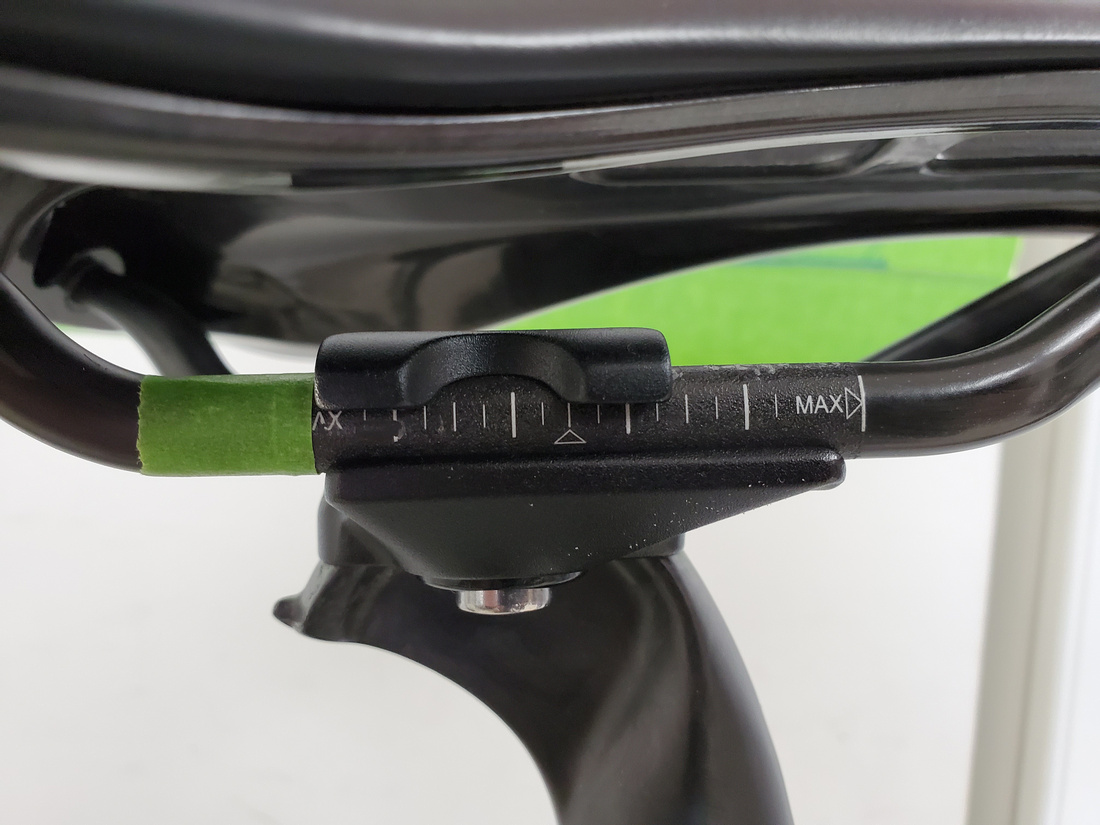 The nose on the Pro Stealth is usable even though they are about the same size where the Dila is not really. I think it's because of the flatter side to side profile of the entire saddle and also the nose does sit about an inch shorter than the Dila based on where you actually sit. Also the PRO Stealth shell is much more rigid including the nose to be able to support your weight on it versus the Dila that's kind of a hammock. There is just no way around getting really low / forearms on the handlebar / flat back without being able to clear your nuts over the nose. The Dila nose is too long specially considering the distance between where you sit normally and the tip. It also doesn't feel wide enough. I'm not sure why it is billed as a road/tri/tt saddle. You can still get in the drops fine, but more difficult to get flat back.

Below is the two saddles overlaid on top of each other. 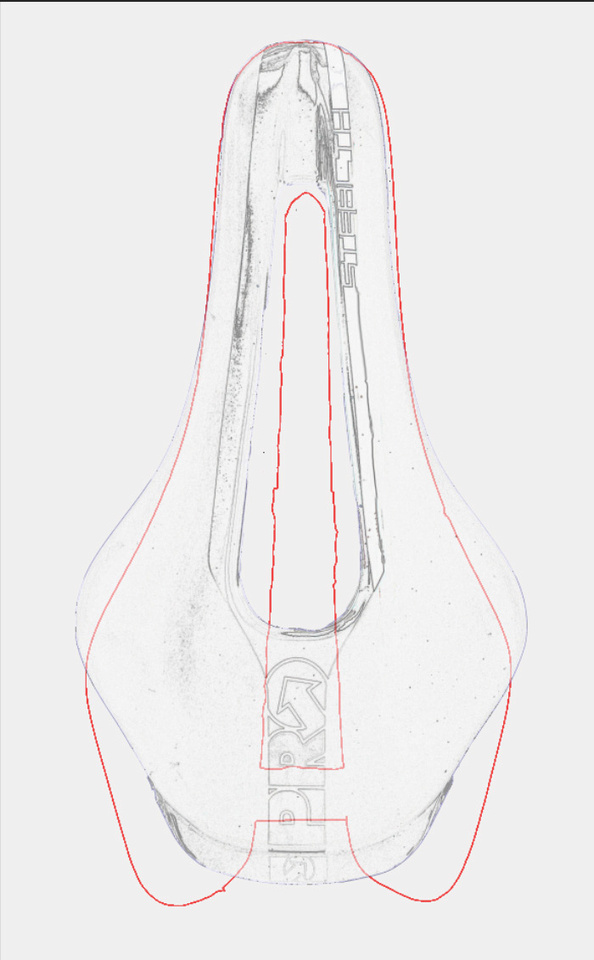 The photo below is lining up where I would actually sit on the saddles. 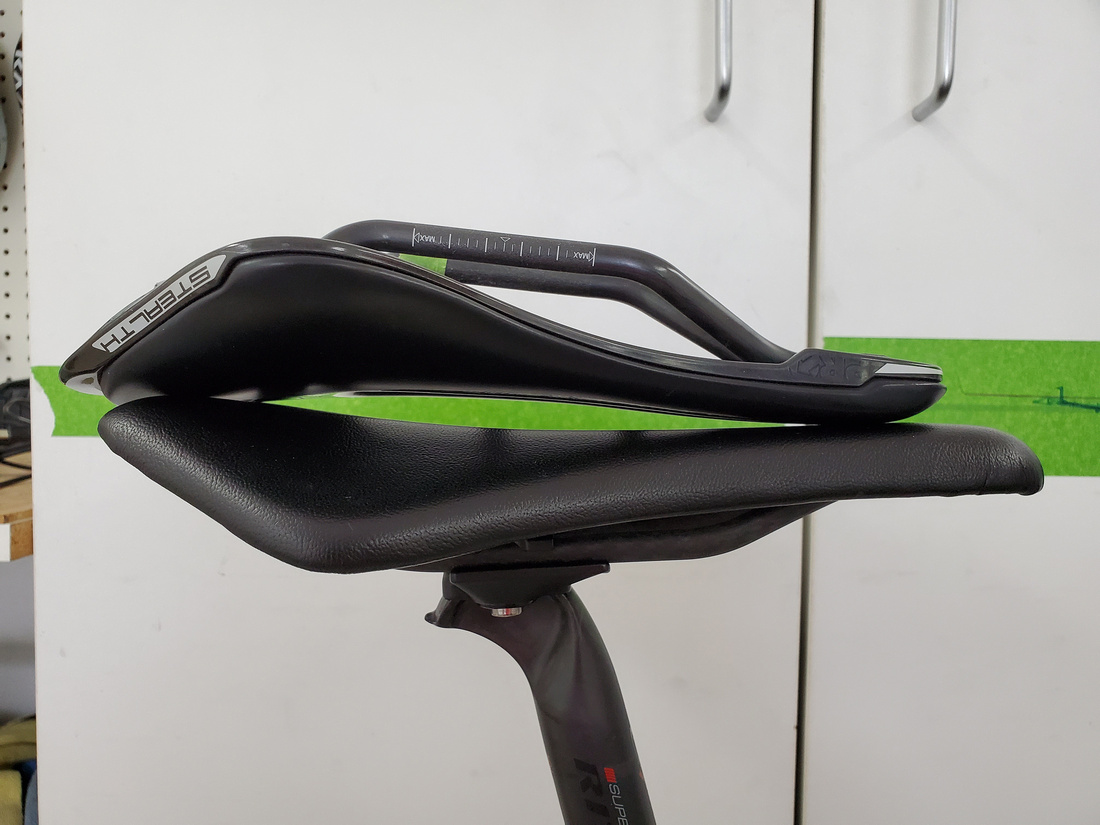 I've only had two rides on the saddle so far so these are preliminary impressions. First ride was 20 miles to figure out the fore / aft and saddle tilt. Second ride was a climbing ride up Glendora Mountain Road 37 miles with 3500 ft elevation. My biggest gripe about the saddle is I wish it was flatter side to side when looking at it from the back.. like the Pro Stealth. So it does effectively reduce the saddle width and you do feel a little more pressure up the middle. Although I did notice it when first trying it out, it's not really an issue. It's never enough pressure that it's a nuissance and you don't think about it. I would prefer a slightly larger center cut out also. The ride had long seated climbing at about 5-6% and I never got any numbness to the penis. I did have that happen on a few rare occasions with the Pro Stealth even, but I think all saddles can cause this and can be avoided by just shifting around and standing from time to time. By the end of the ride I didn't have any soreness anywhere. The flex in the saddle really works like others have said and it's quite amazing since the padding is so minimal. Sit bone/ pubic rami pressure was well controlled and I couldn't really tell a difference between padding amount between the two saddles. Sometimes with the Pro Stealth it would get a little sore right where the sitbones are pressing into the saddle. That being said, I think professional riders will prefer the PRO Stealth because you do feel like you are more solidly planted on the bike if that makes any sense.

I should have taken a photo of the rear profile, but hopefully user refthimos doesn't mind me using his. This is demonstrating how much flatter the Pro Stealth is. 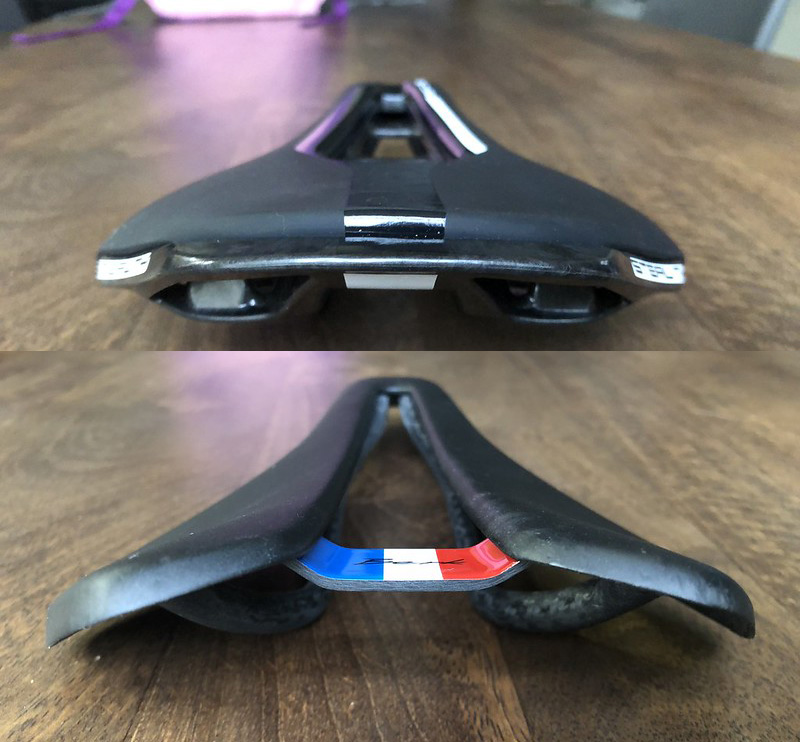 Here are some photos of the caliper set at 110 cm which is my sitbone width. Obviously we don't sit straight up on the saddle. 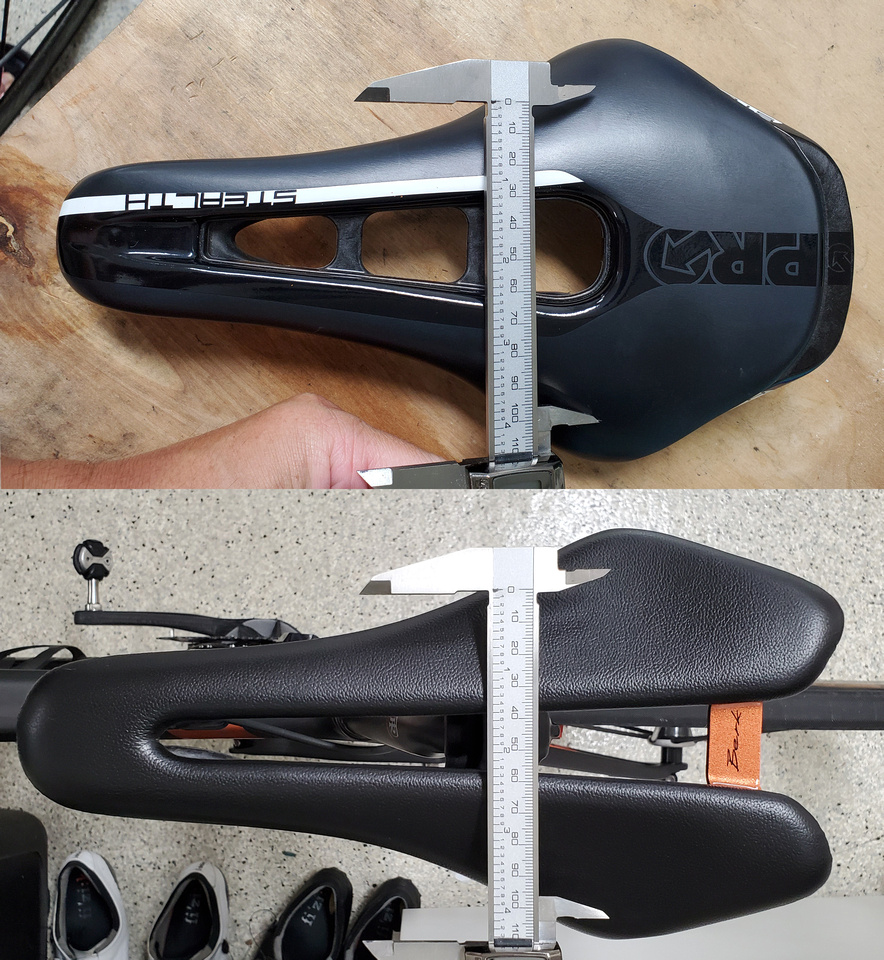 Here you can see how much more of the saddle will go up the middle with the calipers still at 110 (of course our sitbones aren't the shape of a caliper) and resting on the saddle. 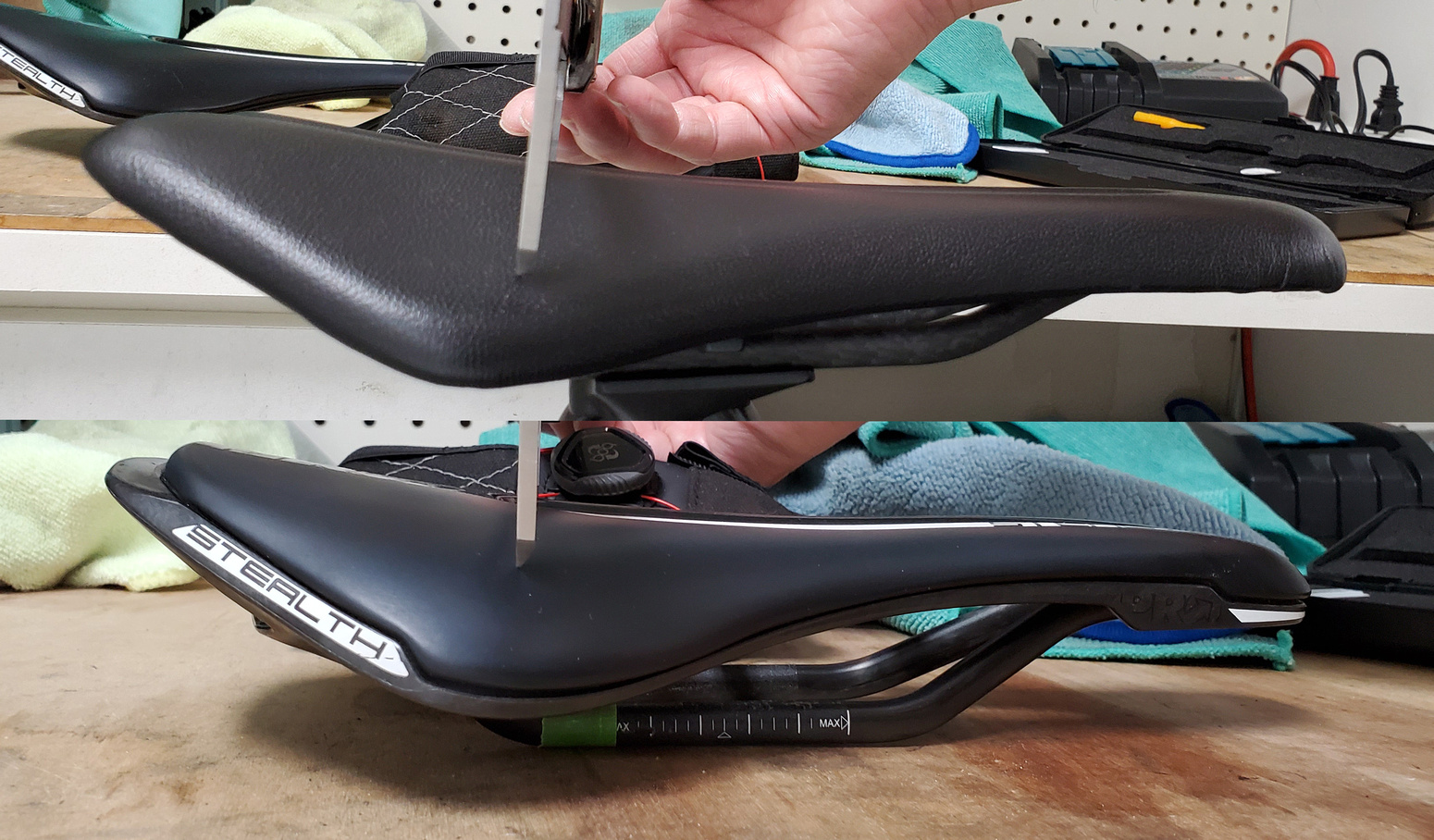 In conclusion I'm happy with this saddle and will report back after doing longer rides such as 100 miles and see how my bottom feels then. Even though I have a few small issues with the saddle (saddle rail positioning, not being flat enough, nose not as usable as PRO Stealth), by the end of the ride nothing was sore so that's a huge plus. If I had to choose another saddle for a weight weenie bike then the Dila would be an easy pick. If I had to pick another for an aero bike I probably would get the PRO Stealth again specially since I have one lying around. One last thought is I appreciate how the Dila wraps the edges down so you dont feel a hard edge against your thighs.
Last edited by coresare on Mon Jun 03, 2019 10:10 pm, edited 12 times in total.
Top

The attention to detail with the color matching on your bike is incredible, nice job!
Top

Good job. I’m not sure about this but I think the lower half of your saddle clamp may be on backwards. The clamps I’ve seen like that generally have the longer portion extending to the rear of the rails.
Colnago C64 - The Naked Build; Colnago C60 - PR99; Trek Koppenberg - Where Emonda and Domane Meet;
Unlinked Builds (searchable): Colnago C59 - 5 Years Later; Trek Emonda SL Campagnolo SR; Special Colnago EPQ
Top

Yeah, Colnagos seat clamp is like that too, but I just think it looks odd that way. And generally if I hit some pothole unexpectedly I find my weight is pretty much always rearward of center and when you’re more forward you’re generally not weighted as much on the front of the saddle as you are more on the pedals and bars. I dunno, just my thinking. But I guess if it hasn’t broke, don’t fix it I suppose.
Colnago C64 - The Naked Build; Colnago C60 - PR99; Trek Koppenberg - Where Emonda and Domane Meet;
Unlinked Builds (searchable): Colnago C59 - 5 Years Later; Trek Emonda SL Campagnolo SR; Special Colnago EPQ
Top

Bought the 160mm version... notice that the nose is too wide for my fat tight....

Any idea will the 140mm solve this problem?
Top

Great review, thanks. I am thinking about the Dila too. I also love the PRO stealth. The PRO stealth superlight is an option now. But certainly not as light as the Dila. But it's a safe bet coming from the standard stealth carbon.
Top

Erwin wrote: ↑
Sun Jan 26, 2020 4:05 pm
Great review, thanks. I am thinking about the Dila too. I also love the PRO stealth. The PRO stealth superlight is an option now. But certainly not as light as the Dila. But it's a safe bet coming from the standard stealth carbon.

Pulled the trigger on a Berk Dila 140mm. I will let you know how it works for me. I have tried Specialized Power, Prologo Dimension, Selle SP01 Tekno, Berk Lupina, AX Phoenix, AX Sprint, MCFK and a few more. The Pro Stealth is currently the best for me, it is even on my gravel bike. But for the lightest bike I want to try out the Berk Dila...
Top

Erwin wrote: ↑
Sun Jan 26, 2020 4:05 pm
Great review, thanks. I am thinking about the Dila too. I also love the PRO stealth. The PRO stealth superlight is an option now. But certainly not as light as the Dila. But it's a safe bet coming from the standard stealth carbon.

I'm considering the Dila, the Pro Stealth, Selle SLR Boost, or Cadex boost for replacing the Selle SLR Tekno on my XR4.

Why not also the new short nose ones of fizik too?