Oltre XR2 build on the cheap

This won’t be the flashiest build or the lightest, part of the fun of building bikes for me is the challenge of putting together something good with a bit of ingenuity and hunting for the right parts. I’ll definitely be doing this on a budget as my wife is already convinced I have too many bikes (she may be right), my target weight is simply under 7kg which should be doable

This started when I bought a used XR2 frame off eBay; a complete impulse buy given I was about to get a new Izalco Max disc, but the price was right and I’m a sucker for a Bianchi and have a steel Pantani that it will look great next to.

The sellers photo below showed it in good condition apart from lost paint on the drive chain stay from dropped chains. It’s missing forks, seatpost, seatclamp, hanger, headset spacers etc which probably contributed to low price I was able to get it for.

When the frame arrived I was very pleased to see it was in good condition and the paint all intact apart from the chain stay. The one nasty surprise was a damaged drive side dropout which I’ll talk about in a second post as I’ll need some advice on how to repair it.

I was able to pick up a fork for AUD200 which has already arrived. I’ll need to add AUD100 for ultrasound testing (just being cautious) and another AUD275 to paint it Celeste as it’s currently black so it will end up costing more than the frame

Seatpost is next, no idea where I’ll get one yet, and then I’ll have the basic frame to start building on. At this point the major build items are:

- Chorus groupset; because I’ve never had campag before and it seems right, bonus being it’s quite light for a mid-tier groupset

- Wheels will either be lightbike 46x27mm or some Prime RR38s a mate is offloading. I’d prefer the Lightbike’s but for the sake of 50g I might take the cheaper option

- Cinelli Neo Morphe XXL bars which are currently on my TCR, UNO step as per WW rules. I’m tempted by some Enve SES Aero Gen 1 bars that are cheap at the LBS but they’re heavier and won’t support bar-end Di2 if I go that way in the future, very sexy though.

- Jagwire Elite Link cables, just for something different. Not sure how much weight they actually save

I’ve not done a full build inventory and weight but from what I’ve added up so far I think it can sneak in under 7kg without getting too silly, let’s see how it goes.

I’m not in a rush so I’d imagine this will take 1-2 months to finish. I’ll post up occasionally as it progresses and ask a few dumb questions I’m sure as there are a few areas I’ve not dealt with before like Campag and BB386EVO

Nice. I think I was watching that particular frame for a bit too. Too bad about the dropout.
Chasse patate
Top

So here’s the detail of the dropout damage, my bad for not picking it up in the original listing pics. As you can see it’s been crushed inwards, it also has a slight bend towards the centre-line of the bike.

It’s an Al dropout bonded into the frame and can’t be removed easily. Does anyone have any experience on straightening these?

I could just bend it out again but would hate to snap if off as it would be a bitch to fix once broken. Different Al alloys require different approaches but for the common 6061 alloy you can heat it to soften it and then bend it before heat-treating it to harden it again. I’d be concerned that the heat required to soften it would damage the paint as well. Any suggestions?

That's a pickle. It's not clear to me how the drop out deformed - would a rear - front picture show it better?
Top

I’ll get some better pics tonight and measure the amount it needs to be opened up, I’d estimate 4mm at the moment.

I had a good look last night and am a little less worried. Because the hanger (which is on order) sits over the top of the axle locating slot it will help locate and support. I’ll wait to the hanger arrives before deciding an approach but I’m thinking of very gently heating and bending it out.

If it’s too resistant to force (ie feels like it may break) it will be an option to Dremel the gap to the correct width as there is some extra material behind the axle. My logic is the load bearing will mostly be in the vertical plane, the front-rear loading will be much lower is it’s just locating the axle and providing restraint if you hit a big pothole. I’d rather have a little less material at full strength than all of the material there but fatigued from too much bending which Al does not like at all.

On a different note, I fitted up the frame and fork yesterday and wanted to get you opinion on the fork colour. I’d planned on painting the forks Celeste to match the original forks but my brother prefers the black fork, I did a straw poll on our bunch WhatsApp last night and 8 prefer the black, 4 prefer the Celeste.

My frame with black forks

I actually don't mind the black and it makes it similar to the current schemes (celeste frame black fork or vice versa).

But I'd get it painted anyway, for correctness.
Chasse patate
Top

The black fork looks a bit off right now, but it might look more balanced once the black seatpost, bars and wheels are installed.

I like the black. I would stay with it till the bike is complete, then re consider but I think the black will work nice with wheels and black bar tape etc....
Top

I had a red bike and a green bike with warranty fork replacements, both came in black. I really liked the look and I think this one looks great. Really like the fork profile on yours.

As others have said, I agree that there needs to be some coordination to make the forks fit well.

Attached example of matched and black forks. Both cases look nice and I think it's what you have as the back story to the appearance as well as appearance itself that makes a difference to you. 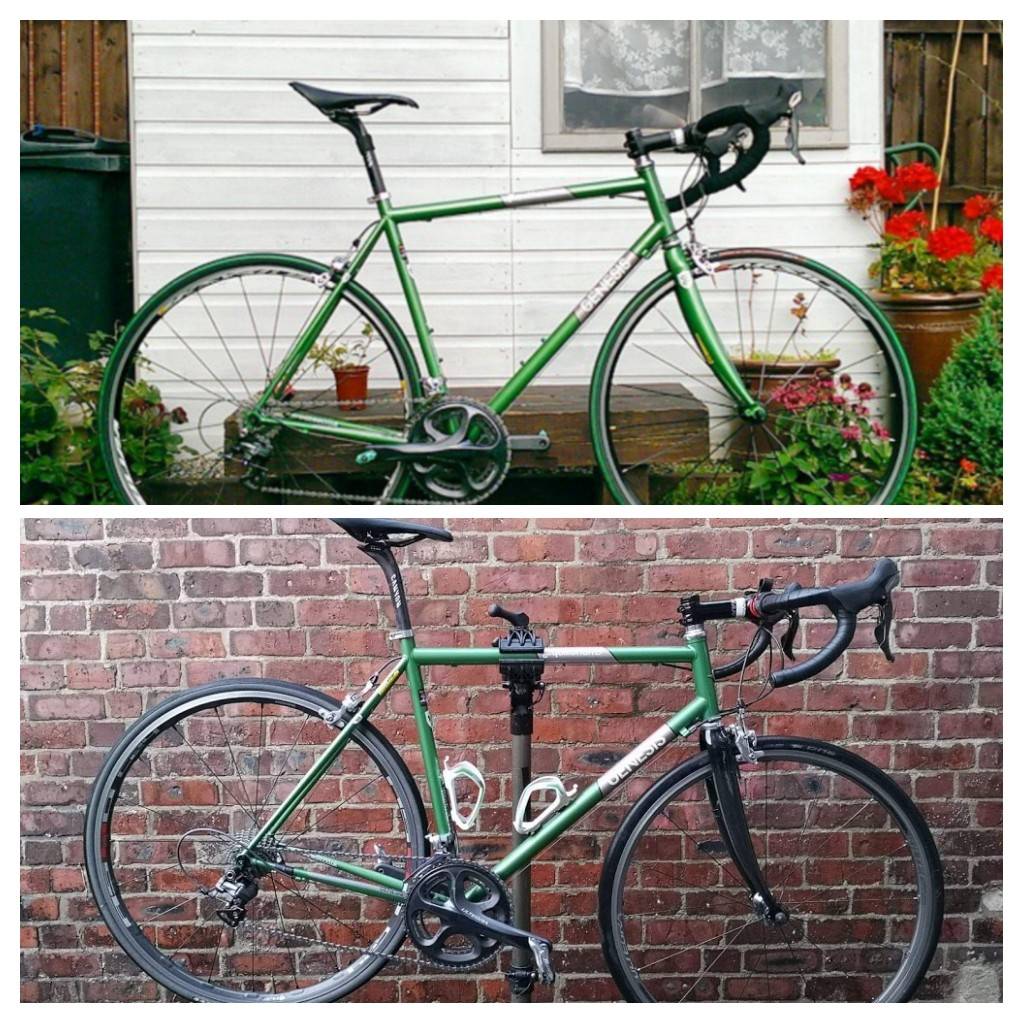 Yes, I’m hearing ya. Black it is; the nice thing is it’s a do nothing option so I can always change my mind later and it saves me $300 in the meantime

On the dropout, the hanger conveniently arrived today so you can clearly below see the amount of bending on the dropout when you fit it up. Whilst I could remove all of that material it doesn’t feel like it would leave enough meat to give comfort, the blue line on the send shot (with the dropout then removed) shows what would be left if I dremelled out all of the bent material

And the second shot

Ah okey, that's clear. As you say, probably won't bend back in a durable way.

I think it's damage limitation at this point.
Top