So I intentionally went from one bike back to two and then accidentally three. Only two can stay, so I figure why not make a thing out of the comparison?

The Wilier. Sitting as my second most successful bike - at least in terms of how many miles I've put on (the count which is now 20+). I love this bike. It's the most comfortable aero bike I've ridden and the handling still surprises me often (in a good way). There have been a few times on fast, familiar descents that I thought I got it wrong - only to look back and the ride data and see that I was just travelling several MPH faster than I ever had previously.

What I love: Why look for a mistress? I started looking for a second bike that would be nice to ride and not feel compelled to smash everywhere on. On the Wilier, I feel obliged to basically ride 21-23mph everywhere I can... which the wife doesn't appreciate on our coffee rides

Enter the Dogma. My first ride on this, I actually got off the bike 3x to see if the back tire was flat as the rear end is so compliant. I'm only about 400 miles into this bike but I've enjoyed the heck out of it and enjoy the look of it more every day (bordering on obsession). 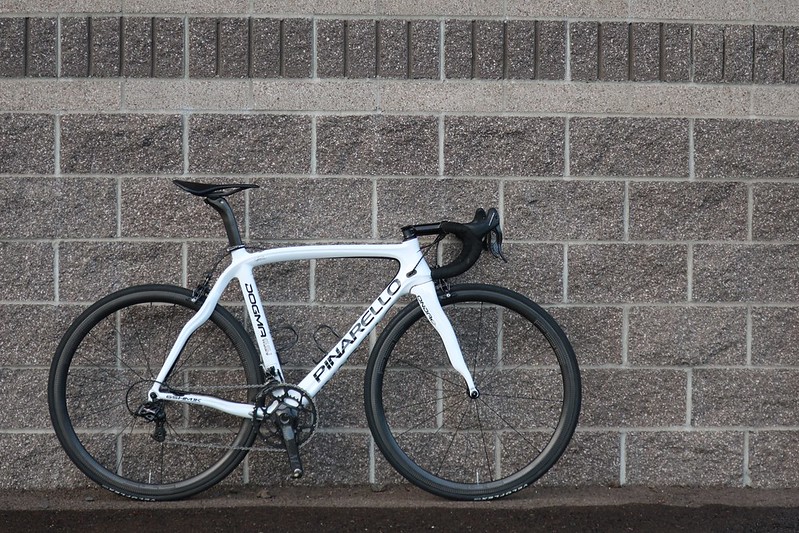 What I love: Why look for a mistress? The Mosaic. Caley Fretz's RT1 is probably the bike that kicked off my interest in titanium. I've dreamt of a custom ti bike with integrated seat mast for years as my real "one bike to rule them all." Even as I'd settled in happily with the Wilier, I always told myself that if I found one secondhand that had a reasonable shot of fitting - I'd own it. Fortunately, that time came when I was back to being OK with two bikes. Less fortunate that I happened to have two bikes that I was really pleased with. So what to do? Compare them all and winner has to find a new home!

Since the Mosaic is just a guest/experiment, it's not getting built up properly. Instead, I'm using parts I've got around (group, wheels, bars) and ordered the basic missing pieces to get the bike assembled (like the Ritchey topper). For this bike to unseat the Dogma, it's going to need to beat it in handling and comfort. If it's able to do that, I'll actually do the build how I'd see it ideally (which also means sub 6kg!)

All of my riding over the next few weeks will be on the same saddle, wheels, tires and pressure. I'm going to start by spending a little time with the Mosaic to get acquainted and then I've got a few roads and sections of roads that I conside3r to be benchmarks for certain things. Such as:
Last edited by Imaking20 on Sat Apr 06, 2019 8:16 pm, edited 2 times in total.
Current:
Acid Mint Tarmac
Hakk MX

Gorgeous bikes to say the least.

Just for the sake of curiosity. How do manage 2 bikes with different drivetrain (Campy vs Chitmano)?? I will assume you have dedicated wheels for each bike and do not swap them between the 2. Why even bother with 2 different brands in the first place?
The Herd
viewtopic.php?f=10&t=149524
Top

I'll admit it's a bit of a struggle going from perfect shifting to riding Campy - which is why I'd picked up another 9150 group to put on the Dogma.

No dedicated wheels. The wheels all swap between bikes without issue. All are running SRAM cassettes except the Nemesis which have a Campy FH
Current:
Acid Mint Tarmac
Hakk MX

I apologize if this offends, and my opinion means little to others beyond myself.... but the wavy design on the dogma offends my eyes. Call me shallow, but that is the bike I would drop, purely on looks.
Top

RocketRacing wrote: ↑
Sat Apr 06, 2019 12:52 am
I apologize if this offends, and my opinion means little to others beyond myself.... but the wavy design on the dogma offends my eyes. Call me shallow, but that is the bike I would drop, purely on looks.

actually, it reminds of a botch photoshop job on the fork and seat stays...

Cool thread, looking forward to the end results but I have no Dog in this fight, not yet.
F8 inGamba viewtopic.php?f=10&t=156685

Even though I’ve never been a big fan of the curvy Onda stays, I do like the simple white/black tonal qualities and basic (sort of) traditional lines of the frame. In contrast, dropped seatstays make me ill, especially when they’re coupled with rim brakes since they wreak havoc on obtaining a nice smooth line of the brake housing from the top tube to the calipers themselves. My vote is to keep the Pinarello.
Colnago C64 - The Naked Build; Colnago C60 - PR99; Trek Koppenberg - Where Emonda and Domane Meet;
Unlinked Builds (searchable): Colnago C59 - 5 Years Later; Trek Emonda SL Campagnolo SR; Special Colnago EPQ
Top

I predict the Mosaic will lose on ride quality alone. The ISP on the Mosaic just screams a harsh ride! In my own experience a skinny 27.2mm seatpost with setback gives a velvety ride.

IMHO a non-racy Ti bike for those mellow days should have a sloping TT which allows a longer exposed seatpost. Coupled with a skinny 27.2mm setback post will bring out the best qualities of a Ti bike.

It's not really a fair test to compare a custom bike built for someone else as a true representation of how it could ride. If you did an RT-1 for yourself you could copy the geo of the Wilier to match the handling aspects you love about it. Then depending on tube selection you can tune the ride to be however how want it to be, within limitations of the frame materials.

Bye Mosaic. Custom bikes not built for you are generally bad. The front end is a good amount taller than your other bikes.
Top

How many outdoor miles have you put on the Wilier?
Top

Willier. I enjoy one, it got many km too. Difficult to beat.

I’d slap the Campag on it, mine has the previous gen Record 11s
Top

What kind of wheels do you have in the garage?
I think it's interesting with wheel match to bike. A plush bike marries well with stiffer wheels, while a stiff frame might feel better with wheels not über stiff.