Buy your favorite brand or the one you know you will have the best aftersale service (in terms of warranty but also replacement parts) snap off the shitty head it probably come with and get the silca presta chuck and a digital pressure checker.

The Silca presta chuck will work nicely with any valves except if you have very little exposed valve (like 10mm or less) and will stay put at 160+psi without any lever locking system. Most simple and effective pump head I know.

Or if you have money, buy a silca pump.
Top

I'd hazard that the reliability of the floor pump would depend on where you're from as well, and how much you intend to use it. FWIW, I've used floor pumps from both Lezyne and Topeak, and have had both fail on me. The reason for failure was moisture collecting in the gauge, which caused the gauge to fail completely. In the case of the Lezyne, following gauge failure, I wasn't able to get the air into the tyre, and the gauge was impossible to replace, without first destroying the original one.

Thus far, I've had 2 Topeaks, followed by 1 Lezyne, all within the span of about 4.5, 5 years, which works out to approximately 1 pump per year. It must also have been due to me only using them about once a week prior to a ride.

I'm now on the Superpista Ultimate. Atrociously expensive, but at the rate I was going, was well worth the investment.

While it wasn't cheap at the time have lasted many years without many issues.

Definitely leaning towards silca even though the cost seems stupid for a floor pump.

I have the regular Superpista, and I love it. If I would buy a new pump, I guess it would be silca superpista digital.
Top

Just get an SKS rennkompressor, the cheapest one you can find on sale, then if/when the head fails, get a Hirame head on there.

I had two Renns (an ordering mistake, forgot i had one on back order, spotted one on sale in a local shop!) and was still waiting for one of the heads to fail after 4 or 5 years, they are both fitted with EVA heads, the MV is apparently somewhat less reliable.
(I only have one SKS Renn now as the wife took the other one when she moved out. I miss that pump.)

Neither of them have missed a beat in all the time i've had them. Gauges seem fairly accurate when ever i've done anything back to back.
Top

Those SKS pumps look great. I just bought a $10 pump so we would have something to pump up my kid's schraeder bike tires.

I'd be inclined to get another Silca pump when this one finally dies. I've had this since around 1982. 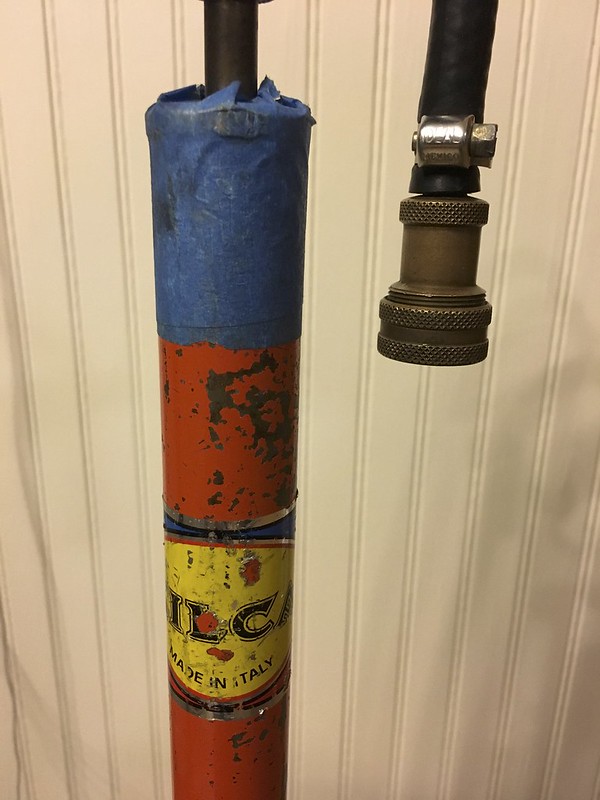 Yeah. I bought the yellow version of that Silca when i was a teenager (mid 80s). Replaced the head after about 15 years use. Replaced that pump with the SKS. So it did 25 years, give or take.

Looked at the "new" silcas as a replacement. Then unsubscribed from their mailing list.
Comedy pricing.
Top

I've been using Bontrager Turbocharger HP for about 4 years.
It works almost flawlessly so far until now i that the gauge doesn't rest at 0 anymore.
It now rest at 20psi mark. Which destroy my trust in its gauge accuracy.
I pump my road tire to only 65-70psi. If it is off by 10 psi or even 5, that's not so insignificant.
I wonder how to be sure my next pump's gauge will be reliable and durable?
Top

Best way to guarantee an accurate gauge is to buy a gauge on it's own. Anything on a pump that gets banged about is going to have *some* errors.
You just decide if they are acceptable or not.
Top

I too opt for the cheap pump and separate digital guage but I guess I never asked... how accurate is a $20 digital gauge?
Strava
Top

I've got a Topeak Joe Blow DX and it's been nothing but problems. First, it came with a broken fitting, inside the pump, that allowed the air to bleed out. Later, the gauge broke and would stay at 30psi. Topeak claimed that the pump wasn't properly placed on the valve when I inflated the tire, but I doubt that, and even if so, my old Bontrager pump (and an old, no-name pump I picked up on Amazon 5 years ago) have never had this issue.

Manufacturer, model, how it's stored.
It might be more precise than the one on your pump though. Even if the accuracy is similar.
Top

FIJIGabe wrote: ↑
Mon Mar 04, 2019 9:09 pm
I've got a Topeak Joe Blow DX and it's been nothing but problems. First, it came with a broken fitting, inside the pump, that allowed the air to bleed out. Later, the gauge broke and would stay at 30psi. Topeak claimed that the pump wasn't properly placed on the valve when I inflated the tire, but I doubt that, and even if so, my old Bontrager pump (and an old, no-name pump I picked up on Amazon 5 years ago) have never had this issue.

I'm completely dissatisfied with the product, which is a shame, because it looks very nice. I have other Topeak products and had been impressed with what they make, but this pump left me completely disappointed.

I haven't JoeBlow ACE DX, but I bought my JoeBlow ACE in 2012 and I use latex...
Maybe the new version is crap, I don't know.
Marco Pantani - Momenti Di Gloria
Top

That said I have the silca but I didn't like their heads and added a older Birzman Snap-It or a lezyne threaded one... I change them out every few months...