The ideal bar tape (which, when and why)?

I also mostly use the standard Deda although in terms of touch/feel I prefer the Canyon which has a texture somewhat similar to suede. I also used Lizard, nice but a bit easy to scuff and also an expensice Cannondale microfiber/gel which was pretty but too slippery.
Top

I always ride with gloves so don't take this as bare hands recommendations.

White tape i have found supercaz super sticky kush to be light,comfortable, durable and stay white. It is certainly slippery is bare handed and wet.

Fabric silicon stays white the best but is heavy, expensive and it kinds of pills like a sweater at the high friction areas which limits its longevity

Another LizardSkins user. If you tend to sweat much and don't ride with gloves I would not recommend it though, once it gets wet (does not soak sweat) it can be slippery. I sweat heavily but ride with gloves most of the time. The grip of Lizardskins' tapes is amazing though.
Top

For weight/price Deda Traforato is great and hopefully it's also durable. Haven't test it yet.

Used Lizardskin 2.5 for couple year and atm using last tape on trainer bike. Very slippery with sweat hands but with gloves no problem and not so durable. I wouldn't pay ~30€ but 20€ sale price is ok.

Prologo tapes had also nice soft touch but can't remember exactly what I have been used. One of the favourite tapes.

c60rider wrote: ↑
Thu Feb 21, 2019 8:33 pm
I've used cinelli cork tape and more recently the gel tape for many years now. The thing I like with the gel rather than standard is that it grips to the bars rather than sticks so you don't get sticky residue left all over the bars when you come to replace it. You just have to pull the gel stuff quite taut as you're wrapping or else it will slip on the bars. But the feel of cork ribbon I've always found to be soft, almost slightly warm to the feel, grips well, all good things if you don't wear gloves out training, and you can scrub it really well with soapy water and a brush and it comes up pretty clean.

Cinelli Cork it is for me too. I've found nothing I like better and I've tried pretty much everything (except Supacaz, which I wish to try for a style I like, so I'll give it a shot). I always come back to Cinelli Cork.
Top

3) doesn't leave any residues whatsoever
It doesn't offer any real cushion, but at least ensures your hands don't slip on your expensive uberlight carbon handlebars

If you're riding with gloves, there's no point of having additional cushioning in bar tape, but, but stating this opinion, please note I'm relatively insensitive to handlebar comfort (given that I'm comfortably (enough for me) riding 22-23mm tubs and full carbon naked Berk saddles). On my light bike, I'm ridingTesa even without gloves.

+1, this is my experience of Tesa tape as well.


kode54 wrote: interesting...never thought of using TESA tape. Do you have a pic of your handlebars with it wrapped in TESA?

I have quite a few, apologies to the thread for the photo dump.
Here's the tape newly wrapped. 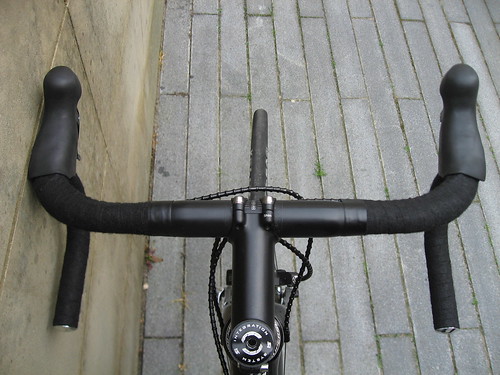 In this photo you can see the little bumps of my iLinks underneath the tape. I like this, it fits my grip nicely, but it's something that should be considered. 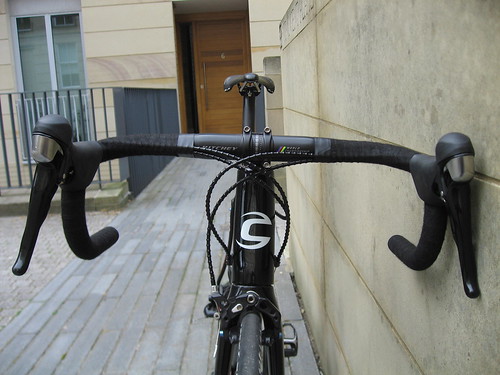 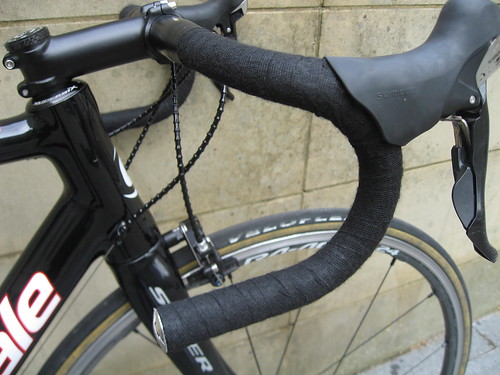 You can see that after a while it gets a bit bobbly, but is still fine to use: 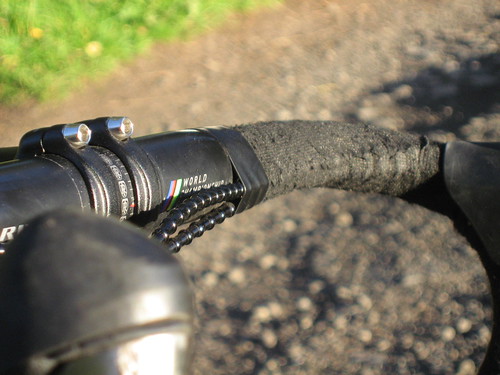 Eventually mine got a hole (worn, not a tear) 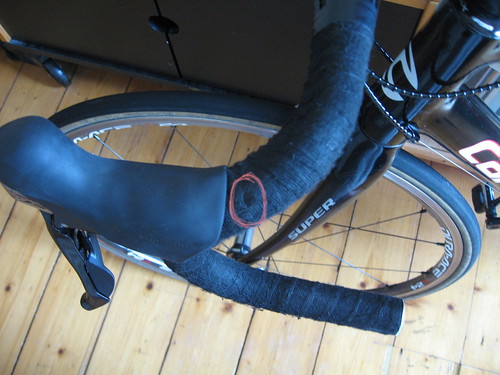 But it's easy to patch up. I've just done the same thing on my Hetchins which has handlebars perfectly designed to wear out bar tape, I'll change them eventually 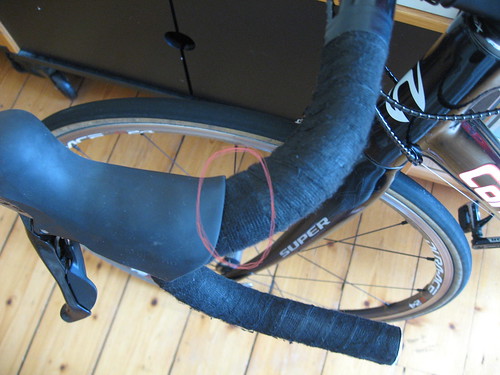 ) I wrote this in my build thread for the bike in the photos above:


themidge wrote:Tesa 51608 ‘bar’ tape
4ibanez provided a pretty good review earlier, but I though I’d do my own anyway. The tape is very thin, like so thin it’s just a furry coating for your bars. As such, it offers pretty much no cushioning to the hands, so I would definitely recommend everybody wears gloves when using this tape over normal distances, except perhaps on very smooth roads. It is quite nice to the touch, and I like the way it allows the cables underneath to make a ridge at the front of the tops of the bars for you to grip when climbing. Obviously the hoods themselves are not affected by bar tape, but beware of the more significant drop off onto the bar with such thin tape. This is the main reason I would always use gloves with this tape, the transition from bar to hood is in just the wrong place and in combination with the knobbly iLinks, digs into my hand if I don’t wear gloves. The drops felt a little thin at first, but I have got used to it quickly and find I quite like it.
I should add that trying to wrap the bars all in one go without leaving gaps or cutting off a strip to put over the shifter clamp is impossible because of the width of the tape, but it is easy to make touchups, especially around the shifter area.

With 3mm and rubber construction, isn’t it on the very heavy side? Closer to 100g (can’t remember if was th supacaz or a fabric that I weight above 100g)?