I am looking for a new bike and the search continues. I was wondering if anyone has anything good or bad to say about the NO.22 Great Divide. I can't really find any reviews online.

I have narrowed my search down to the Alchey Eros, Litespeed Ultimate Road, and the No.22 Great Divide. I am heavily leaning towards the No.22.

I really like the clean look of the Eros however at $4000.00 for straight guage ti I am hesitant. The Litespeed seems the most "modern" with its formed tubes however it doesnt really "speak" to me. The No.22 is priced right and I like the anodized finish options. It also has internal cable routing and a threaded BB. I'm not a huge fan of the No.22 branding design on the frame but could live with it.

Unforuntaley, none of the brands have LBS support near me. There is a Moots Dealer nearby but the brand is almost $2K a frame more then the above.

What say you?
Top

A friend ordered an Alchemy Eros frame...he hasn't received it yet. however, the price wasn't $4,000...i think he bought it from Competitive Cyclist where they have them on sale for much less. Don't test ride the Moots...or else you may end up with one and a lighter wallet. I have the Vamoots Disc RSL and its a nice riding bike with 28mm gravel tires on it. I've been riding that for the winter.

No.22's are great bikes in the flesh. Great detailing and very well thought out.

A similar price point would be Wittson Ti.

Great bikes. You can both from Blacksmith in Toronto.
Top

(Finalizing my order on a Vamoots RSL disc next week)

Having said that, if the details are right, it’s not going to much different than the other Ti bikes. I do like the color matched stem and fork
Top

I have an Eros and I’ve come close to buying a Great Divide disc a few times. I keep putting one in the cart, but I can’t decide on the color.

They are both great frames made by good builders. We have a 22 dealer locally and they really look great. The Eros is going to be stiffer, the Great Divide is a little more relaxed. I don’t think you’ll be disappointed with either, unless you have some specific requirement.

Don’t get too hung up with butting on a Ti frame. It is a different material than steel.
Top

There is one under going test by James at cycling tips. Looks promising so far!
Top

Does Pilot Cycles tick any of the right boxes? I haven’t got any experience with them, but after coming across their site, seeing the price tags and the possibility to customize geometry, I made a bookmark for a future Ti project.
Top

I would go with the Great Divide. All the examples I have seen are fantastic.
De Rosa Protos
Colnago C64
Top

Check out Lynskey. Their prices, especially for their sale items, are pretty good.
Top

I thought I would chip in with my impression of the Great Divide Disc. I've had one for 3 months now and put about 1500km on it so far. Some of the items below will be pros or cons depending on how you see it. Caveats to the below is that the frame is a bit too long for me, my favourite bike to date was a steel bike and I haven't riden any really good carbon bike for a long time. I like metal and this is my first titanium bike.

My general take on it is that it is a wonderful bike for the long rides in the weekend but it won't excite you on the shorter rides during the week. It is very much a n+1 bike, not a n=1.

- Looks fantastic. Welds are well done, the look is clean and polished. I cannot fault the workmanship. I hate to sound vain but one of the reasons I got it was because I think it's a wonderful example of a modern rendition of a titanium bike.
- Very comfortable. I step off the bike after 7hrs on NY and NJ roads (every ride I have includes about 25miles on broken NYC roads - one of the reasons I had for going titanium) and I have zero fatigue from the bike. The longer you ride it, the more it seems to reward you. I feel better on the bike at 4hrs in than during the first hour. I'm on 45mm carboon wheels running 25mm tyres are 100/110 psi for what it's worth.
- I feel its more of a cruiser than a punisher. Rolling terrain at 20mph is its bread and butter and I greatly enjoy riding it in this terrain on longer rides (or looping Central Park for hours for that matter).
- Reasonably priced for what it is (though I see they have raised prices recently). Internal brake routing, finishing, etc. that costs extra with others is included in the base price.
- T47 bottom bracket. I like this standard.
- It grows on you with time. I have this odd respect and appreciation for what this frame is and how comfortable it is on absolutely wretched roads.

The not so good bits:

- Not very chuckable. If you pick your lines well, it handles but it doesn't like adjustments mid-line. Caveat here being that the frame is a bit too long for me so could well be that's the reason.
- There is flex - it will accelerate if you hammer down but there isn't any snap to it (Currently I top out at about 1200w and can sustain about 800w for a reasonable period of time. 16olb on a good day). Whether this is an issue is up to you. The No.22 Reactor I rode was much better in this regard.
- The RD hanger isn't a very good design. Setting up your RD it's easy to accidentally set it up at an angle.
- Timelines and delivery. No.22 weren't particularly great at communicating delivery timelines and their delivery timeframe from what I have heard from others who have their frames is consistently longer than what they suggest. It took me 5 months from the day the order was placed to delivery (2 months later than originally quoted). Now, with a custom frame this is not an issue in itself, but what I did not appreciate was the drip of "just 2 more weeks") that turned out to be 8 weeks. I would have preferred an honest "you'll get it when you get it, looks like 8 weeks buddy" than this.

- I don't love anything in particular about this bike beside the looks. It doesn't excel at anything - and I say this greatly appreciating how very compelling the whole package is and without being able to fault it at anything in particular. With this bike I get off and think "wow, I shouldn't be feeling this good, this many miles in, or had anywhere near as much fun the last few hours" but at the same time at no point were my pants on fire from excitement. In the same way I enjoy the bike for long rides, I wouldn't pick it for shorter rides. With some bikes the ride lingers - with this one it does not. I think "this bike is very very good, but I don't have a stupid grin on my face". As Chris Harris said about a car - I respect, but I don't love it.

Long story short, I won't be keeping it. I'll be replacing it with a Vamoots Disc RSL. This frame is just a tad too long for me and I didn't like running it with a 80mm stem. I also want something a little bit stiffer because the majority of my rides are within 3hrs. And I want the new frame this summer already - the half year build time is a deal breaker for me. 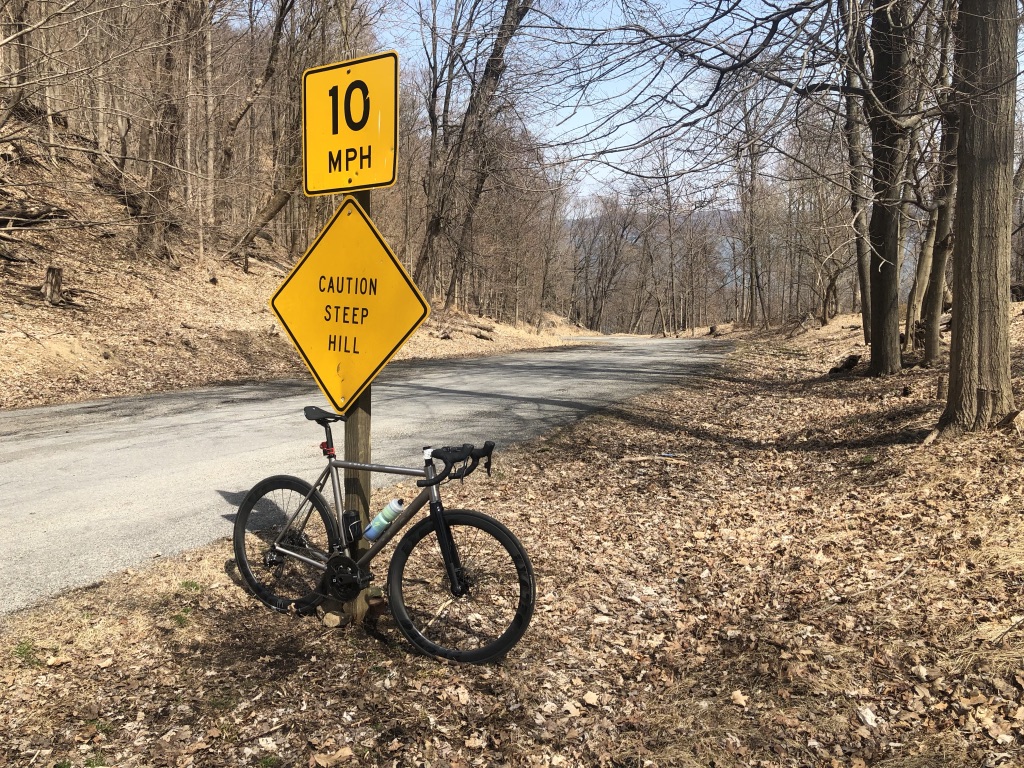 clutchup wrote: ↑
Sat Feb 16, 2019 11:12 pm
I am looking for a new bike and the search continues. I was wondering if anyone has anything good or bad to say about the NO.22 Great Divide. I can't really find any reviews online.

I have narrowed my search down to the Alchey Eros, Litespeed Ultimate Road, and the No.22 Great Divide. I am heavily leaning towards the No.22.

I really like the clean look of the Eros however at $4000.00 for straight guage ti I am hesitant. The Litespeed seems the most "modern" with its formed tubes however it doesnt really "speak" to me. The No.22 is priced right and I like the anodized finish options. It also has internal cable routing and a threaded BB. I'm not a huge fan of the No.22 branding design on the frame but could live with it.

Unforuntaley, none of the brands have LBS support near me. There is a Moots Dealer nearby but the brand is almost $2K a frame more then the above.

I would just pay the extra 2k for a Moots. Why not just get the best if you are already spending that much $$$. Lifetime warranty with Moots as well, I think No. 22 is 10yrs?
Top

Extra $2k is not a small sum of money - and who says it's the best? NAHBS certainly doesn't. $4k for a frame is already a silly amount.

If you're looking for a titanium bike to compete in the labratory tests against carbon - look no further than Litespeed. Having spent a good bit of time on a T2, I can say without hesitation it is an out and out race bike that happens to be made of titanium. The problem for me was it did the lab so well that it certainly sacrificed some of what made titanium so appealing. I wholeheartedly enjoyed climbing on the T2 more than the Evo Hi Mod that followed it, and there is a buzz you feel in your feet on every bike that's not titanium that's hard to describe or appreciate unless you ride carbon and titanium back to back. That said, my old ass Dogma is absolutely more comfortable than the T2. And I prefer the descending manners thanks to a less vanilla 73/73 STA and HTA.

I can't provide firsthand experience on riding the other two bikes in the OPs list. What I can share is that I've started down the custom path with No22 twice now and the team over there is fantastic. Really. I owe those guys some of my money one of these days as they've been so helpful and responsive.

The above review of the Great Divide is quite interesting - probably the first negative review I've seen of a No22 - which I actually appreciate. That said, if the sporting criteria is what @jadedaid is after - I think it's a waste of money to spend the Moots (assuming RSL) premium over a Litespeed. The latter will be lighter, cheaper, a comparable aesthetic, and also brings an outstanding build quality.
Current:
Acid Minty
Boone