This is the Campagnolo mess when your rear gear hanger breaks

Hanger failures happen because the
1) the hanger bend and that puts the mech in the spokes if your in the biggest cog.

2) the chain jams somehow pulling the rd forward and ripping it off.

It's probably 2) unless c60 rider was in the biggest rear sprocket at the time.

Chains can jam for a number of reasons.
www.thecycleclinic.co.uk
Top

I’ve seen this happen riding behind somebody on a road (also riding a Planet X coincidentally) when I piece of gravel flicked up and jammed between the chain and jockey wheel, written chain, mech and frame. The guy I was with pedalled through and basically pulled the back of the bike to bits.
He stopped pedalling and I was right behind him. I saw something drop off the rear mech, I presumed it was a bit of carbon or metal from the mech but it was actually I 1cm piece of road gravel.
Total freak occurrence.
It’s also worth noting that even the most perfectly maintained bikes that are set up perfectly can suffer from a chain getting jammed. Unfortunately it’s freak incident that can happen.
Like has been said before chances of a mech hanger snapping due to a manufacturing failure and then causing the drop out to snap in any way is not something I ever saw, even working in multiple bike shops dealing with hundreds of snapped hangers.
Very sorry for the O.P. On a positive note it’s time for a new frame!
Hopefully it’s a one off incident.
Working at Planet X bikes, Evans cycles and 4 other cycle shops I don’t think I ever saw a mechanic use loctite on mech hanger bolts.

Not directed at O.P at all but working in shops every customer never laid their bike on its side, they never had their bikes fall over ever.
They never transported them in the back of their cars, laying on their sides with wheels or anything potentially putting any pressure on the hangers.
Owners never leaned anything on their bikes ever!
It was always impossible that grit, sticks or gravel flicked in to the drive train as they only rode on clean, freshly swept roads.
Owners bike were always maintained to a world class level and gear limited screws and mech hangers always checked weekly.

Same story every time, no other all part on the bike had an issue but mech hangers were always badly made and faulty.

Like all the faulty mech hangers you see snapping in pro races for no reason. It just happens on a regular basis and anything but a faulty hanger is impossible.

It feels like people refuse to take any responsibility in any way or even accept there’s a possibility that something actually weakened the hanger.

c60rider wrote: ↑
Sun Mar 17, 2019 3:37 pm
The fact it happened so quickly after a hanger swap on a bike that had worked perfectly for 7 years is why I wrote the thread in the first place. The new hanger had no damage to it. The only stress, as such, was an initial alignment with the Park tool. I used threadlocker on the bolts just so that they didn't need overtightening at all. I think they're 2mm allen keys so fairly small which logically limits the tightening force you can put on them but it didn't break across those. I've no idea about the dropout material but they're nothing like the C60 I have so I would guess they're not carbon.

When I read this post, I thought... ok... well the hanger alignment process might certainly have contributed to a bit of this apparent "split" in the dropout... almost looks like it's laminated and came apart. Perhaps it wasn't noticeable at the time, but it certainly could have weakened the whole affair enough that the shifting stresses was all it took to put it over the edge. I've read stuff from both Cannondale and Trek in their manuals about actually removing the hanger to align it, and explicity stating to not use a derailleur hanger alignment tool to align the hanger. Certainly makes you a bit leary. I thought, so then what are you supposed to reference it to. Well, it then becomes a trial and error process, I have a good bench vise that I've used to hold it and allow me to actually bend (with the alignment tool) while it was secured in the vice. But really... I've never known anyone else to do that. Most of the time mechanics are going to use the tool just as it's intended to be used, with the hanger on the bike and then bend it appropriately, as opposed to just being used as a "checker" once resintalled it to see how you did. Then repeat as necessary, but not too much, since every bend weakens the hanger somewhat. 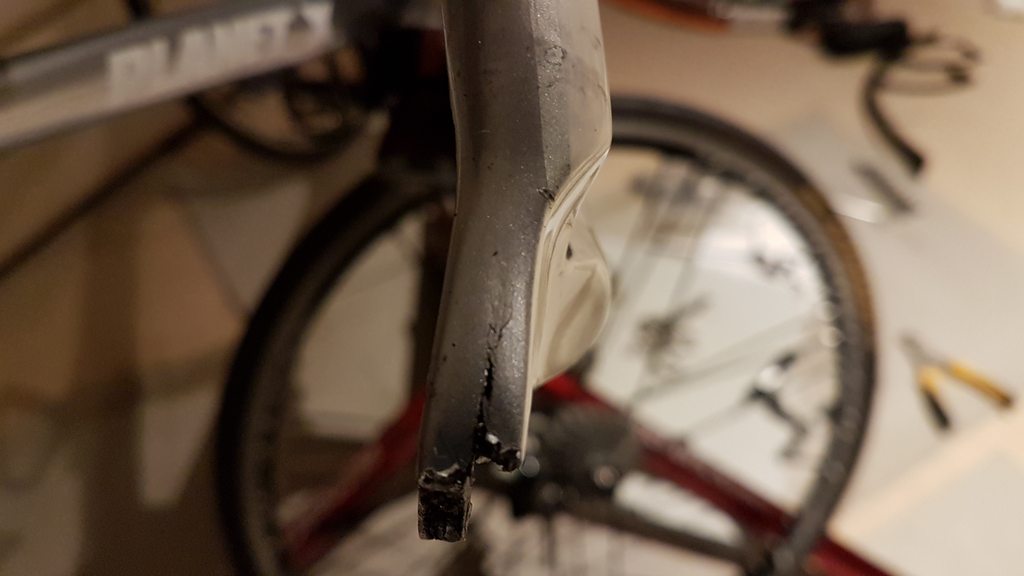 As for the Wheels Manufacturing hangers, I really doubt there was an issue with it. Those are good solid well machined hangers, unlike some of the "artificial cheese product" they use in some hangers these days. Anyway, it's all moot now, but that's kinda my best guess as to what happened here. New hanger, derailleur alignment which compromised the dropout, then boom, right away, or very soon after, this happens. Coincidence? Long shot.
Colnago C64 - The Naked Build; Colnago C60 - PR99; Trek Koppenberg - Where Emonda and Domane Meet;
Unlinked Builds (searchable): Colnago C59 - 5 Years Later; Trek Emonda SL Campagnolo SR; Special Colnago EPQ
Top

I think this all points to the fact that we are skating on the edge of design limitations with this technology. We have 11-12-13 cogs put in the space where we used to have 6. The chain is closer to the spokes. Frames are carbon with spindly thin dropouts. Carbon derailleurs aren't as strong as aluminum.

Nobody used to talk about aligning the hanger 20 years ago because there was such a huge tolerance that it wasn't a common issue. Now, a slightly out of whack hanger, a hanger at the edge of the design spec, and a tiny bit of cable drag because of your integrated bars, stem and frame and you have shifting issues that are hard to solve.
Colnago C59
Top

AJS914 wrote:I think this all points to the fact that we are skating on the edge of design limitations with this technology. We have 11-12-13 cogs put in the space where we used to have 6.

Ha... youngster, what about when there were 5 cogs, and a 10speed truly meant 10speed... 5 cogs at the back, 2 up front. But yes, everything’s gotten tightened up and there’s no room for slop, but I don’t think that’s a bad thing. Just means mechanics (both home and shop) need to take a little more care than they used to. But I digress. Gotta go... Matlock’s about to start... 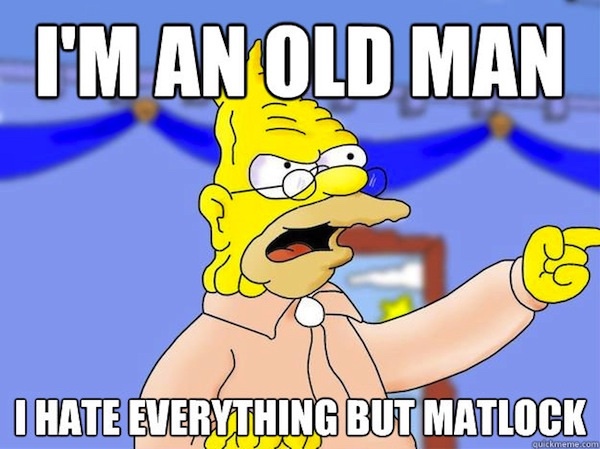 Ha... youngster, what about when there were 5 cogs

Hey old man, we are probably the same age.

I think they went to 130mm with 7 cogs, no? Maybe that was 8 speed. My last old steel frame, a Guerciotti SLX, came with a 126mm drop out spacing but it happily took later 130mm rear wheels. My 1995 Litespeed was my first frame with a 130mm spacing. Now I'm dating myself!
Colnago C59
Top

Ha, good for you, I actually thought that's why you might have said 6 instead of 5, but then thought you're probably younger so 6 was just the earliest you remember. And I'm not even sure when the spacings changed to be honest, but I'm pretty sure the spacing was 126mm, before it jumped to 130mm, and I'm not sure if it was 7 or 8 cogs that required the change (I think 8, but I really can't remember). I know I got my frame cold set to accommodate the new super wide 8 cog hubs, lol. Ah, the good old days, when aero meant just hunching over a bit more and taking advantage of those deep deep drops. Kids these days. lol.
What are you doing Friday night?.... wanna come over and watch Matlock reruns?
Colnago C64 - The Naked Build; Colnago C60 - PR99; Trek Koppenberg - Where Emonda and Domane Meet;
Unlinked Builds (searchable): Colnago C59 - 5 Years Later; Trek Emonda SL Campagnolo SR; Special Colnago EPQ
Top

AJS914 wrote: ↑
Wed Mar 20, 2019 5:17 pm
I think this all points to the fact that we are skating on the edge of design limitations with this technology. We have 11-12-13 cogs put in the space where we used to have 6. The chain is closer to the spokes. Frames are carbon with spindly thin dropouts. Carbon derailleurs aren't as strong as aluminum.

Nobody used to talk about aligning the hanger 20 years ago because there was such a huge tolerance that it wasn't a common issue. Now, a slightly out of whack hanger, a hanger at the edge of the design spec, and a tiny bit of cable drag because of your integrated bars, stem and frame and you have shifting issues that are hard to solve.

Just a few years back (maybe three or four) my chain popped off the jockey or got jammed somehow while riding and the next revolution ripped the RD arm right off.. fortunately it was only a 105 RD and the bike was steel with the dropout built into it so no damage done. Had I been on a carbon bike it would have probably looked a lot more like the OPs 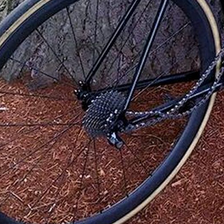