Thought I would post this if anyone has the same problem I had. I was looking to cut my steerer tube shorter for the new stem I installed. The headset was previously installed and I was trying to remove the headset tension assembly. Its supposed to come out as a complete unit with the expander, long bolt through the center with the tapered nut that pulls into the expander sleeve. I removed the headset cap and unscrewed the head end of the assembly (6mm key) but as I loosened the head I could sense that the tapered nut on the other end was jamming on something. I then clamped the bar stem on the steerer tube and used a set of circlip pliers under the head end (head of long bolt) of the assembly to pry up the head up as I turned it out and finally the long bolt came out of the tapered nut which its not supposed to do. The long bolt has a flared end below the threads so the nut wont come off but it did. So now I have a fork with the long expander sleeve still inside along with the tapered nut at the bottom unattached. Kinda sweating it now cause this might be a fork replacement. The expander sleeve is long and requires good force to move it even when there is no tension on it whatsoever and of coarse its not moving in any direction at this point. I took the long bolt with flared end and put it on the grinder to remove the flared portion of it leaving the threads as they are. I am hoping now that I can thread the long bolt back into the tapered nut, I know its a long shot but I got nothing to loose. I took a clothes hanger and bent the end of it so I can position the nut right side up while holding the fork and shining a light in the steerer tube (pita) and once the nut is in position you have to hold the fork upside down so the nut doesnt piss off on ya. This is gonna be fun, so now I take the fork and attach it to a wheel hanging from a ceiling hook and gently try to thread the long bolt into the nut sitting on the expander sleeve, thinking to myself this is never going to work. Wow this did work and without to many tries. I tighten up the bolt to make sure the threads are good and the expander is gripping inside the steerer tube. Okay so I still have not cut the steerer tube yet which means I have to remove the bolt again, dont know if I will get lucky here more than once but here goes. Steerer tube is cut and now I need to reinstall that long bolt which seems to be just as easy the second time, oh yeah I had to push the expander sleeve down inside further to allow clearance for the bolt head to sit in position.
I am sure someone will tell me there is an easier way to do this but it didnt take all that long, think maybe 1.5 hr but as far as I know the only other way would be to destroy the expander sleeve to get it out and replace it but that would mean some damage to the inside of the steerer tube as well.
I hope if anyone has this same issue this long drawn out story will help them resolve their problem.
viewtopic.php?f=10&t=154188
2018 Colnago V2R Rim Brake
2014 Norco Threshold Disc Brake
2012 Time RXRS Ulteam Rim Brake
2008 Time VXR Rim Brake
2006 Ridley Crosswind Rim Brake
Top

This is the culprit that I write of. 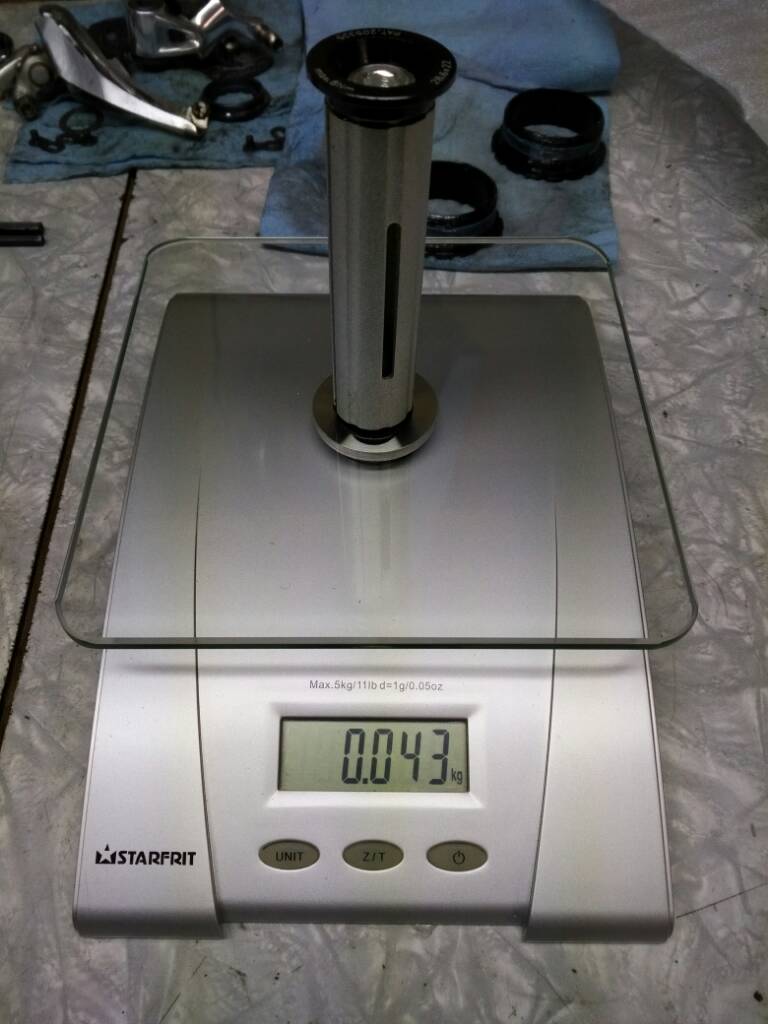 Sent from my STH100-1 using Tapatalk

Ouch, so much wrong going on here. Ya know, there’s this thread where people are complaining about the work they get done at the LBS. I’m inclined to agree with them, then I see the kinds of things the “home mechanics” bring in for them. And I feel sorry for those LBS mechanics.

Couple of turns to loosen that 6mm bolt which tightens the cone on the other end of the plug is all you should have done, at most. Perhaps then a little tap on that bolt to simply loosen the wedged cone at the other end. Then voila just pull the whole thing out with your fingers. 5 second job. And make sure the little tab on the cone is in the appropriate slot at the deep end of the expansion sleeve when you reinstall it.
Colnago C64 - The Naked Build; Colnago C60 - PR99; Trek Koppenberg - Where Emonda and Domane Meet;
Unlinked Builds (searchable): Colnago C59 - 5 Years Later; Trek Emonda SL Campagnolo SR; Special Colnago EPQ
Top

Yeah 5 seconds is all it should take and I did tap on the head after I loosened it to knock it free but for some reason the bolt was turning with a good bit of resistance and then it seemed to turn right out of the nut. The expansion sleeve was extremely tight in the steerer tube although I was able to knock it down into the tube so I could cut it shorter but I couldnt pull it out. I think maybe the tab on the nut was the only reason I was able to get the bolt to thread back into it with nothing to hold the nut from spinning. I have never had any issues getting other expanders out of the steerer tube before this one.
Yes I agree with you Calnago on the poor mechs at the shop who may have to deal with someone like me bringing that kind of mess to them and hoping its not going to cost a small fortune to fix it.
I noticed when I originally installed the assembly that the nut end with the flared portion was looking rather fragile. I try not to gorilla grip these things to badly cause I know it will end badly but I managed to not destroy the fork in the process so all is good at this point.
viewtopic.php?f=10&t=154188
2018 Colnago V2R Rim Brake
2014 Norco Threshold Disc Brake
2012 Time RXRS Ulteam Rim Brake
2008 Time VXR Rim Brake
2006 Ridley Crosswind Rim Brake
Top

Wait, so now you still have the expander plug lodged in the steer tube, with the nut at the bottom wedged in? And you’ve ground off the flared end of the long bolt that was attached? Can you put that long bolt back in and catch the threads of the nut? If so, simply do that and thread it on 3 or 4 turns, or as many as you can while still leaving some slack. Then once it’s threaded I n, but loose, just give the head of the nut a whack to dislodge the wedged nut on the other hand. Should slide right out at that point. Unless it’s also corroded to the sides of your steertube, which I have had the pleasure of dealing with before as well. But not a big deal either, just another little trick involved to get it out. But try the above first. It should work, if I’m correctly visualizing what your issue is.
You won’t need that flares end anyway, just remember to screw it in enough that the tab on the wedge is in the slot because that’s what keeps it from spinning.
But don’t sweat, it’s an easy fix for someone that knows what they’re doing.
Colnago C64 - The Naked Build; Colnago C60 - PR99; Trek Koppenberg - Where Emonda and Domane Meet;
Unlinked Builds (searchable): Colnago C59 - 5 Years Later; Trek Emonda SL Campagnolo SR; Special Colnago EPQ
Top

Yes I was able to feed the bolt into the nut with the expander sleeve inplace. Thats why I ground the flare off the end of the bolt so I could feed the bolt back into the tapered nut. I cut the steerer tube to the desired length and reassembled everything as it should be and adjusted the brging tension once the fork was remounted. Oh yeah I put extra grease on the bottom side brging of the head tube. Its good to go and chrisis averted. It actually didnt take long to complete the job once I had a plan.
I think a bike shop would have told me to buy another fork I am sure.
viewtopic.php?f=10&t=154188
2018 Colnago V2R Rim Brake
2014 Norco Threshold Disc Brake
2012 Time RXRS Ulteam Rim Brake
2008 Time VXR Rim Brake
2006 Ridley Crosswind Rim Brake
Top

Oh yes I should say the tapered nut did come free from the expander sleeve and I never bother removing the sleeve once I discovered I could get the long bolt to thread back into the tapered nut. I did however tap the sleeve down in further to make room for the head end of the bolt once the steerer tube was cut to length. I figured why mess with the sleeve any longer if I dont have too.
viewtopic.php?f=10&t=154188
2018 Colnago V2R Rim Brake
2014 Norco Threshold Disc Brake
2012 Time RXRS Ulteam Rim Brake
2008 Time VXR Rim Brake
2006 Ridley Crosswind Rim Brake
Top

The sleeve would for sure go down further than it initially was if you cut the steer tube. The lip on top of the expander sits flush against the edge of the steertube, so there is no danger of it falling all the way in. There shouldn’t be a gap between the that upper lip of the expander plug and the top of the steertube. But you are certain that the little tab on the wedge nut at the bottom is in the slot of the expander plug correct? You want it in that slot so that when you tighten it it can still slide up within the expander plug to “expand” the plug evenly all round. If it’s not in the slot it will simply jam itself against the edge.
Colnago C64 - The Naked Build; Colnago C60 - PR99; Trek Koppenberg - Where Emonda and Domane Meet;
Unlinked Builds (searchable): Colnago C59 - 5 Years Later; Trek Emonda SL Campagnolo SR; Special Colnago EPQ
Top

Yes, that’s what I meant. The flange of the top black piece (versus the actual long aluminum sleeve) is what rests on the upper edge of the steertube. Sounds like all is good now.
Should have told you you need a new fork. : )

Sounds like it. Glad we took the easy route back. But don’t get that lost in the woods again because next time no one might hear you.
Colnago C64 - The Naked Build; Colnago C60 - PR99; Trek Koppenberg - Where Emonda and Domane Meet;
Unlinked Builds (searchable): Colnago C59 - 5 Years Later; Trek Emonda SL Campagnolo SR; Special Colnago EPQ
Top

Haha I spend a lot of time in the woods. My wife will confirm.

Sent from my STH100-1 using Tapatalk