TobinHatesYou wrote: Yes, the Assiomas and P1s work best with the Xpedo cleats and work simply "OK" with the real KeO cleats. No the cleats themselves don't have an unusually tall stack height. As for the pedal bodies.

Thanks for the data, I always have to dig for this info. That’s helps (could add the keo are 13 or 14mm stack depending of the look sources). Impressed that the Assioma are so thin (even if there is no real proof that it I proves the stroke), just a bit annoyed by the extra 1mm of Q factor...
At the new price, I place an order tonight, was about to go for a p2m for cannondale... but having multiple bikes I can’t see better options.

[/quote]
I always refer to his review for PM information. His testing is quite good, and the best is the open comment section. I think he's very fortunate lately (esp the Vector 3), up to a point I believed he deliberately hid the problem. Anyway, he did allow people to leave complaints and that's fine then. That's invaluable.
[/quote]

Agreed, and with developers/manufacturers active in the comments, it may be even better than the 10 pictures plus video of the unboxing process

Regarding Infocrank; I've got one and am not pleased:
- Magnet install was a pain, no-magnet cadence did not work. "maybe because you pedal exceptionally smoothly", was the actual reply from verve.
- The Praxis ring that was on it was warped, that took a long time to catch as I was getting chain 'skips', but only under low inertia, high torque conditions.
- But worst of all, I got very bad signal drops, losing data of entire rides (something that aside from a singular Macbook-air software issue, has not ever happened in over 4000 hours of SRM use). Add to that the support of Verve being quite responsive, but very reluctant to have me send the unit in. So I bought another SRM on a discount, which has been flawless in every way so far. No 40K Watts though...

This is just my N=1 experience and things may have changed, but combined with wanting to run Speedplay, incredible precision (reliably detecting 2W differences between aero helmets with the SRM Track), being able to see the zero offset, set it manually or automatically and having the option to calibrate, makes my choice clear. At the same time I agree with Ray that in this market, SRM is not the go-to choice for the average user. I think pedal based PM's make a lot of sense. If I didn't have any previous experience and had to get a PM now, I'd probably get a Power2Max: cost, track record (the Garmin pro's used Power2Max instead of the first gen Vectors) and BB options. Amongst other things, I'd double check the experience people have with the battery cover on the NG Eco, if that holds up, the cost/value of that unit is hard to beat.
.
I love you guys. Seriously.
_________________


Sometimes I also get some 60+k power readings from 2 different P2M (type-S and NG-eco).

No, that stages is totally fubar'd. It was randomly reading 2k watts or zero watts. It read high on Thursday and low on Friday. Supposedly this is going to be the second time this unit has gone into stages.
Strava
Not for the sensitive types. My Instagram reviews
The Ex's: I've lost track...
Top

I used to have an Edge 510 along with a Quarq. I got some rare cadence/power dropouts. Then I changed it to a 520. Since the 520 upgrade I've had zero drops on two different Quarq power meters. Nada, zero drops in several years. In summary a head unit could play a role but I've had good success with the 520.
Top

. Here, Shimano states that the distance from centre of axle to pedal cleat surface is 8.8mm and 10.7mm for Dura-Ace 9000 and Ultegra 6800 pedals respectively.

Thank you all for great amount of information, i eneded up getting power2max with rotor crack arms and my original ulgetra 52T tooth
Top

-Pedal based have PMs have minor issues. You're tied into Look type cleats that are usually proprietary (if you want the to work well) that are tall, hard to walk in and have sometimes high stack height and sometimes side bulges that give you odd q factor or possibly light foot rub and well generally they're just not as good as a simple pair of Dura-Ace pedals and cleats in terms of durability and function.


Yes, the Assiomas and P1s work best with the Xpedo cleats and work simply "OK" with the real KeO cleats. No the cleats themselves don't have an unusually tall stack height. As for the pedal bodies.

Wow, thanks for compiling this data.

After reading through this thread, I'm glad I opted for a pair of Favero Assioma UNOs from CleverTraining with DCRainmaker's 10% discount code. $440 for my first powermeter didn't seem too bad - other options were PowerTap P1S (read too much about bearing issues) or Stages with their 25% sale (but on my CAAD12 with BB30A, I'd be stuck with a Cannondale SI crank arm and my next road bike probably won't be another Cannondale). The Assiomas have been extremely well reviewed by Shane Miller and DCRainmaker, as well as everyone else who has bought a pair.

The difference between the cleats/stack height seem unnoticeable. The fully sealed unit(s) on the Assiomas seems great (less to go wrong - can ride in poor conditions and not care) and I see the rechargeable battery as a plus rather than a minus.
Focus Izalco Max Di2 Budget Build
Top

I recently forked out on the Vector 3 since my Powertap P1's had been awaiting service for close to 4 months. Long story short, the Vectors were a piece of shit product with constant dropouts and way too skewed L/R balance. I was hoping the problems were fixed in the newer batches, but I guess not.
Luckily my P1'S arrived back from service shortly after.
Top

I have had no issues at all with my Vector 3s, but I have the new battery doors and use CR1/3N batteries.
Top

TobinHatesYou wrote: ↑
Thu Nov 22, 2018 2:16 am
Yes, the Assiomas and P1s work best with the Xpedo cleats and work simply "OK" with the real KeO cleats. No the cleats themselves don't have an unusually tall stack height. As for the pedal bodies.

These stack height number compare only pedal itself. It is good for comparing pedals with the same cleats system.
However, what'd be more useful is total stack height with cleats included.
We kinda know SPD-SL cleats are about 4.9mm from deduction of 13.7mm - 8.8mm on Dura-ace pedals. 13.7mm are quoted by multiple places.
How tall (thick) are Look cleats???
Top

Stack is the distance from pedal axle to the mounting face on the sole of the shoe.

Right, so someone give us the thickness of Look cleats, and then we can finally convert everything to proper stack-height number.
Top

Here ya go, measured at the centerline mark on the side of the cleat. Looks reasonable that this is what the additional stack would be from the cleat surface to the shoe’s surface... 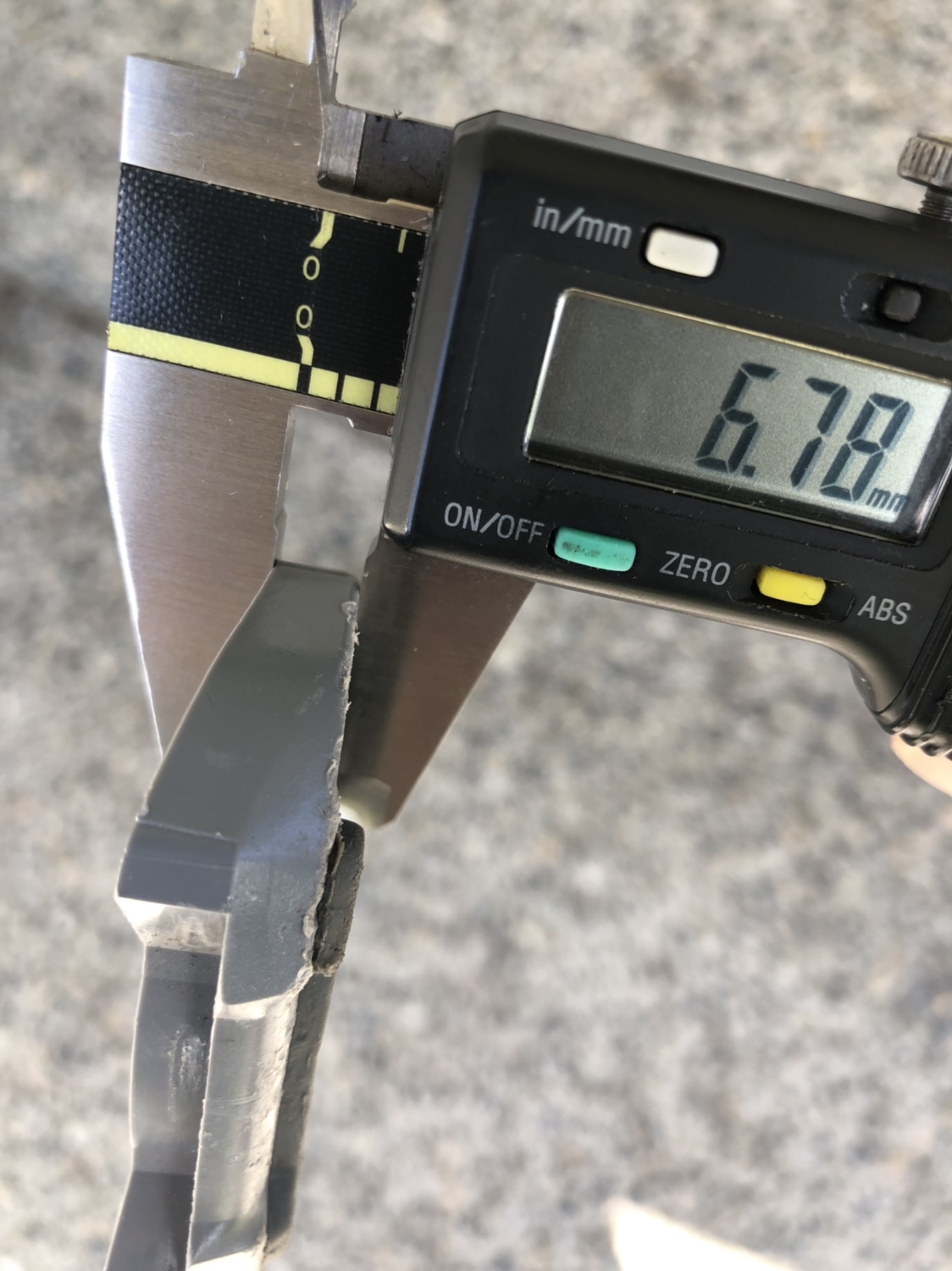 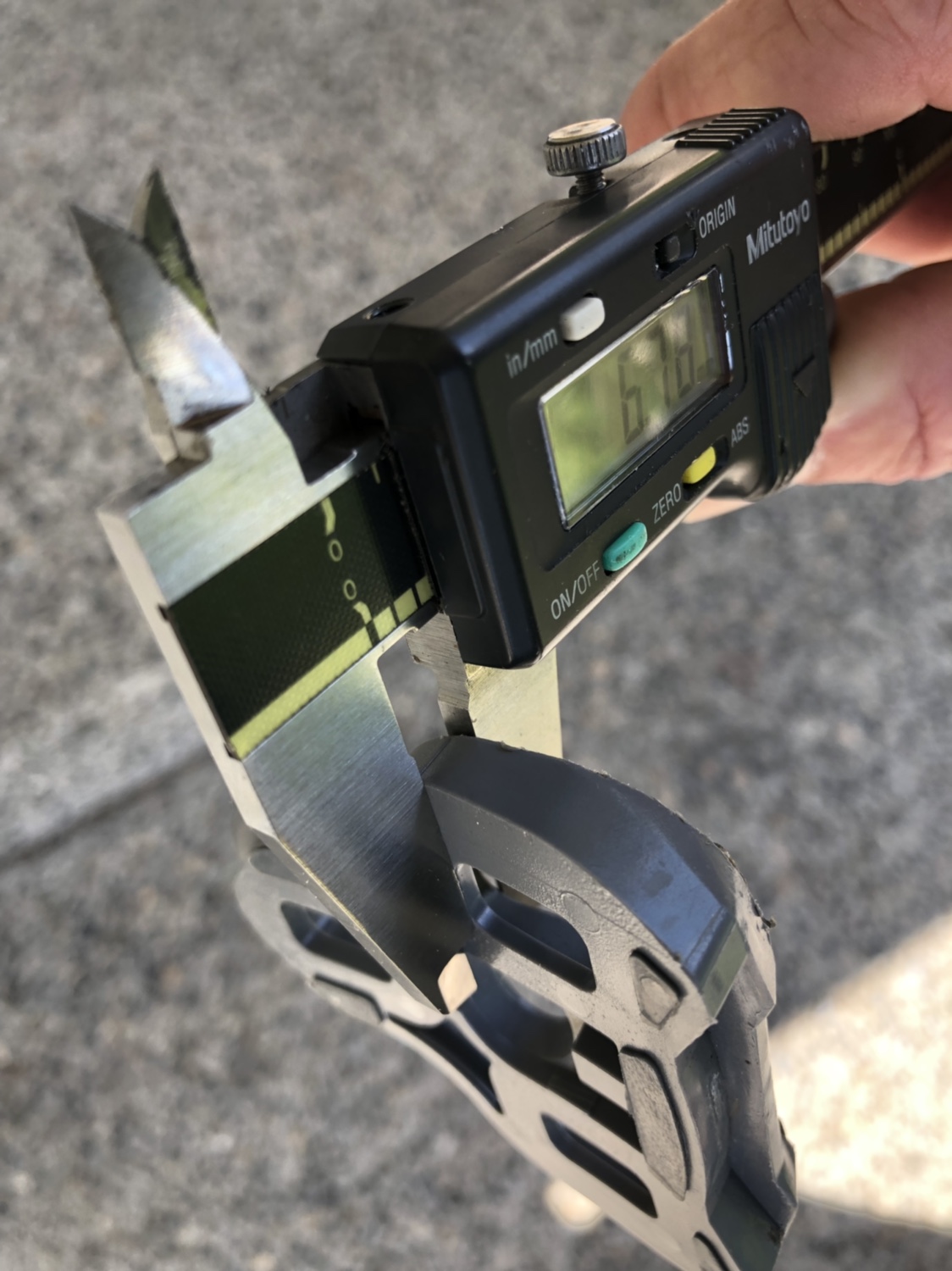