I assume that wouldn't work because the cassette width is the same but the gear spacing is less. Unless the leeway you have with the 11sp callibration / zeroing is large enough to cope with the difference in spacing?

But I don't see why an 11sp derailleur shouldn't be able to be told to shift 11 slightly narrower gaps instead of 10 slightly wider gaps if it was controlled by appropriate software / an appropriate control unit. I assume the piston thing in the mech is mechanically analogue? That would be great because unlike the 12sp mech it would be optimised for cassettes with smaller sprocket gaps, e.g. a (theoretical) 12sp 12-25..

Campagnolo could make a 12sp EPS "race" groupset that was basically just 11sp EPS mechs and shifters with 12sp software. And sell a conversion kit or firmware update for 11sp at the same time.
Top

Can someone point me to the person who adapted Athena EPS shifters to Record? Or that thread? Or even a source of the connectors used for Record/SRecord? Not that I want to do that particular thing, but similar.
Michael Wilson
Top

And the Campagnolo 7mm diameter connector does not fit through the 5 mm space in the Kona Zone chainstay that is about 3 inches from the bottom bracket in a place where I do not know how to get any cutting tool. Di2 fits fine.

And the Campagnolo battery does not fit in the Trek Domane SLR down tube space designed for a di2 battery, and there is no opening between the seatpost and the bottom bracket due to the "suspension".

Campagnolo does not make it easy to use their stuff. And as reported I can use their shifters with di2, and di2 12 will happen.
Michael Wilson
Top

The wastefulness of capitalism..

To gouge the unfortunate consumer.....

It’s always the loyal customer that gets ripped off.


Really??? Campagnolo should try to make old parts forwards compatible with new standards that didn't exist when those old parts were designed?

The flip side of capitalism is consumerism. One could say it's the wastefulness of consumerism to think anyone needs 12 speed over 11 speed. If you have a perfectly good 11 speed groupset then just use it and enjoy it until it's worn out. Get your money's worth out of it.
Colnago C59
Top

If the shifters really are just switches the way the 11 speed are then it seems just silly not to allow 11 speed shifters to work with 12. And if they are not just switches then why did they not fix the connector size issue so that EPS could fit on any bike that accepts Di2, which as stated it does not, and my sources tell me that 12 speed EPS connectors are the same size as 11? And it might have even be possible for the 12 speed to have been just a software upgrade to the 11 speed. Campagnolo might not make any money on that

And as for forward and backward compatibility, Campagnolo late 9 speed, 10 speed & 11 speed cable rear derailleurs all worked pretty well for whichever of those speeds you wanted, assuming you had the appropriate shift levers.

And before bb30 and aheadset, but after the Japanese invasion choosing the british standard, bicycle parts were very interchangable, with a few holdouts such as Cinelli 26.4 and Italian threaded bottom brackets.

Forcing all new parts when going to 12 speed EPS does not seem to be a requirement. At least they did not change the chain roller size as Sram AXS ETap 12 speed seems to have done, so you can fiddle with the chainrings and cranks you want without having to change the derailleur jockey pulleys, or whatever you would have to do with AXS ETap 12. I probably will not try AXS ETap 12 because I am not willing to bet that I can make the front shift 20 teeth reliably, and their shift lever operation means that if it fails to shift you get to try the levers twice, not once, to see if can be corrected. Yes my di2 can front shift 20 tooth difference dual chainring reliably, as can some of my hybrid cable shift setups with Campagnolo 10 or 11 speed shifters and whatever front derailleur happened to be in the parts bin (typically Shimano).
Michael Wilson
Top

carhillclimb wrote: ↑
Wed Jun 26, 2019 9:37 pm
Can someone point me to the person who adapted Athena EPS shifters to Record? Or that thread? Or even a source of the connectors used for Record/SRecord? Not that I want to do that particular thing, but similar.

This is relatively easy to do for derailleurs. You could just get some cable extension kits and make an adapter plug. For shifters, I think the author had a donor set of Record levers.
Top

FYI SRM shifts perfectly and rides quietly with Record 12s chainrings. I assume a similar experience may be had with P2M as well. 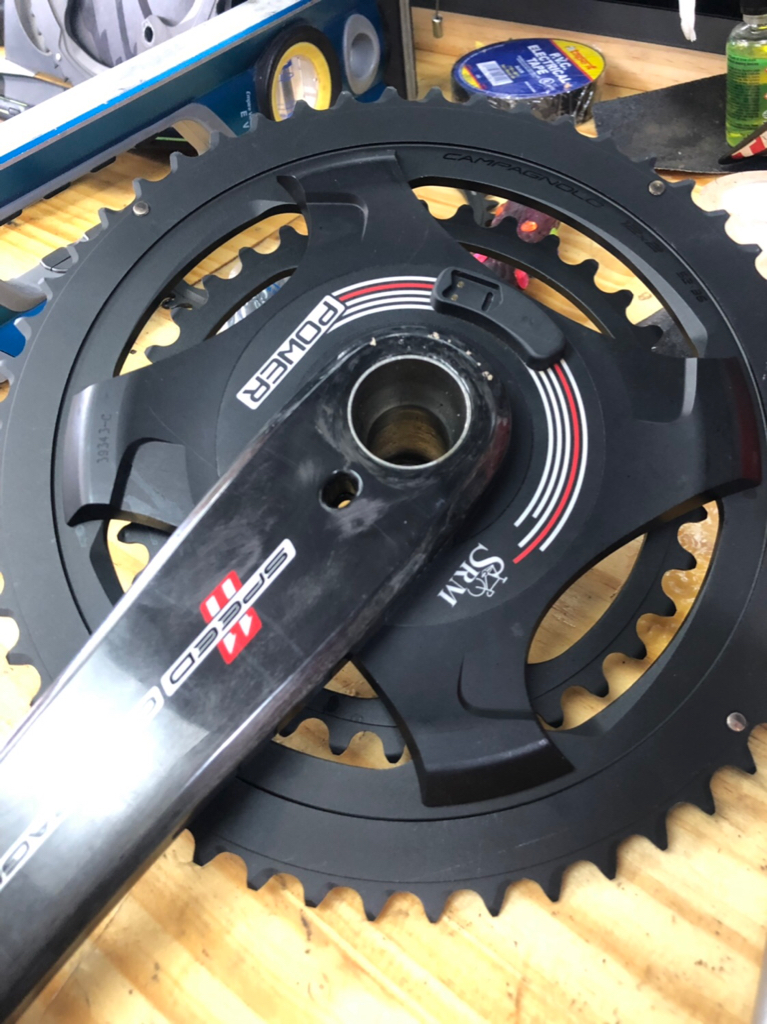 carhillclimb wrote: ↑
Wed Jun 26, 2019 9:37 pm
Can someone point me to the person who adapted Athena EPS shifters to Record? Or that thread? Or even a source of the connectors used for Record/SRecord? Not that I want to do that particular thing, but similar.

More recently than the other link provided I mated H11 hydro EPS ergos to Athena front and rear mechs. The new H11 ergos have Record connectors, the mechs have Athena, obv. I found a dirt cheap Record v1 interface unit on ebay, cut the ergo connectors off that, and soldered those connectors to the ergo wires of a v2 Athena interface unit. This gave me H11 EPS disc brake ergos controlling my Athena mechs. It all works fine. See p3 of this thread:
viewtopic.php?f=10&t=147292&hilit=miller&start=30
Top

I have a couple hundred miles 12 speed mechanical. Here are my comments:
• Derailleur cables/ferrules have been significantly improved and are probably the key to why the system works. Note that they are backwards compatible to 11s drivetrains.
• Rear shifting has improved significantly. There’s no need to overshift or wait for the chain to engage. Speed and accuracy are close to EPS.
• Front shifting is about the same as 11s. But, more force and more travel on the lever is needed to get to the large chainring. This is not an issue when riding on the hoods, but I found it difficult to shift while on the drops. Probably wouldn’t be an issue if I had bigger hands. Also, I noticed that this was not an issue while racing last week because I was never in the drops and the small chainring at the same time.
• There appears to be no compatibility issues with 11s chainrings. I used a first generation UT crank with 39/52 11s rings and then switched to a 2015 Chorus crank with 36/52. I had no problem with either one.

My only real disappointment is the lack of a smaller-range cassette. For a non-professional who doesn't live in the Alps, adding an 11 & 29 and dropping the 18 means that I have one less usable gear with 12 speed. I'm holding off on buying more cassettes in hopes that they add more selection.
Top

Has anybody used aftermarket pads for their Campy Disc Setup?

Am I right that Magura MT8 pads will fit with the difference only being the edges won’t be shamfered for a quicker wheel change.

At the moment getting the Magura MT8 brand opens me up to far more compounds and lower prices. E.g.

Anybody had any experience?

My rotors are also overheating in the mountains as single piece, can’t use AFS. Any better suggestions? I’m currently using Magura rotors which are light but quite aggressive on pads..
Cinelli Nemo TIG
viewtopic.php?f=10&t=156885
Top

Try at least some of them and find which are the most suitable for you.
Top

Try at least some of them and find which are the most suitable for you.

That’s amazing! Thanks so much for the help!!

Obviously bigger sprockets are useful in the Pyrenees, but for me at least, if they aren't useful whatosever for 95%+ of my riding then I'd rather switch cassettes for trips to the mountains once every two years or so!

I know I'm repeating myself on this thread but I find it staggering that we worry about 1 or 2 watts of drivetrain efficiency, 2.5 millimeters of crank length, barely perceptible improvements in shifting efficiency etc, but that few seem to care about the relationship between optimal cadence and gearing, i.e. the fundamental interface between biomechanical and mechanical power. Even just a single sprocket shift in the middle of the cassette equates to a considerable difference in cadence at a given power, e.g. at a dead-constant 225w my cadence is 85rpm with a 36/13 and 92rpm with a 36/14. With bigger gaps in other parts of the cassette you are easily talking about cadence differences of 10+ between gear shifts. Does anyone really think that being forced to maintain a cadence of 100 instead of 90, or 70 instead of 80, isn't going to result in biomechanical efficiency losses? Of course what happens is that you fudge it by finding a compromise between power and cadence (e.g. you might lower your cadence by 5 and increase your power by a few watts at the same time after shifting to a sub-optimal gear), but that's just trying to mitigate the efficiency losses that you can feel..
Top
Post Reply
3720 posts