The axle you linked won't work, because Speed Release axles are M12x1 double-lead thread, while most trainer axles are single lead. (The double lead is what makes Speed Release twice as fast to install: half the turns.)

But there's a workaround. Install this RD hanger, Cannondale part number KP419/, and the axle you linked seems like it should work.
https://www.cannondaleexperts.com/Canno ... _5509.html

This hanger, originally designed for Slate and Beast of the East, has single lead threads, so it fits the trainer axle. One nuance is the rear hub axle sometimes jams on the hanger's inside boss, but slip it past and it works.

As usual, be sure the trainer axle fits the left dropout as well. Speed Release is flat, while some others have a cone.

mr2scott wrote: ↑
Sun Sep 30, 2018 1:36 am
I just got the Black and Acid Stawberry Dura-Ace bike in 51cm. It's the best color.
Took off levers and derailleurs and installed ultegra di2
Removed the P2M and put on a stages (I already have 3 of them)
Installed my ALM saddle
Installed speedplay stainless zero pedals
Installed Vittoria Corsa Speed 25c tires set up tubeless with 2oz of stans in each.

Have a 110mm stem off a GT grade sitting on it and a Cannondale C3 bar 40cm and no bar tape , just for sizing until my Vision 6D bar shows up next week.

The axle you linked won't work, because Speed Release axles are M12x1 double-lead thread, while most trainer axles are single lead. (The double lead is what makes Speed Release twice as fast to install: half the turns.)

But there's a workaround. Install this RD hanger, Cannondale part number KP419/, and the axle you linked seems like it should work.
https://www.cannondaleexperts.com/Canno ... _5509.html

This hanger, originally designed for Slate and Beast of the East, has single lead threads, so it fits the trainer axle. One nuance is the rear hub axle sometimes jams on the hanger's inside boss, but slip it past and it works.

As usual, be sure the trainer axle fits the left dropout as well. Speed Release is flat, while some others have a cone.

thanks for the quick response Damon. If i did install that RD hanger to use the bike on the trainer, would that mean that I couldn't use the original speed release axle anymore when I use it on the road?
Top

Having to put on a new derailleur hanger and losing the ability to use the speed release axle on the road unless i swap them back and forth seems like a pretty steep cost just to be able to ride your bike on a trainer. Does any brand make a skewer for speed release thru axles that can work on a trainer? At this point I'd probably rather get a different trainer or different brand skewer to be able to simply swap my bike onto a trainer
Top

I'm not an engineer and don't understand the 'single lead', 'double lead'. Can you measure your thread pitch?
Is it not something Kurt Kinetic offers?
https://www.kurtkinetic.com/s/Traxle_Si ... e-xsrk.pdf

If it's not usable. Then perhaps, wheel off trainer might be the way to go.
You use your Mavic speed release to clamp wheel-off trainer inside the frame.
Top

While waiting for my bike on order, my LBS and local Cannondale rep reached out to ask if I was interested in putting in some demo miles on an Ultegra Di2 Hi-Mod. Of course I said yes! Here is the bike - sorry for the poor photo, but you all know what this bike looks like by now!

While I only have 2 rides and 130 miles on the bike so far, here are my initial observations. We removed the stock crankset and swapped on my 175mm SISL2 cranks with P2Max NG and Rotor Q-Rings, so it pedals just like my EVO. We also swapped on a Shimano Stealth Pro saddle, which is what I ride on the road. I wanted to test ride the bike as close to how I will have it configured as possible, and keep as much as possible consistent from my EVO so that I could really attribute changes to the bike *system* and not just something like a change in crank length or oval to round rings.

Overall/gut feel: It feels like a road bike. I mean that in a good way. Coming from an EVO Hi-Mod, the bike feels different but not not signficantly so. The front end is crazy stiff - at least it feels that way to me. If you like to sprint, you will love this bike. It's hard to tell whether real or placebo effect, but the bike really seems to come alive at high speeds and is super responsive to sprinting and hard efforts. Maybe it's the math and the cubic effect of aero gains, but you really feel you're gliding at high speed/effort when others are at their limit. There is no getting away from the weight penalty - this bike as pictured above weights 8.27kg or 18.23 pounds. That's with pedals, bottle cages and the Garmin mount. Mine will be lighter because DA rather than Ultegra but still a good deal more than my EVO. And since so much is integrated, there aren't a lot of places to drop weight. But I still know this bike will be faster almost all the time.

Spec: I have yet to see a real-life SystemSix spec'd with the Vittoria Rubino Speed 23s - all of them, including this bike, have been shipped with Continental GP4000SIIs in 25c. NBD to me, as I will run Schwalbe Pro Ones tubeless when I get my bike. I suspect not too many SystemSix owners will care either, since the GP4000SIIs are such great overall tires. But worth noting that it's change. I was also expecting that this 56cm bike would come with a 100mm stem based on an early post from Damon, but I measure the stem at 110mm: 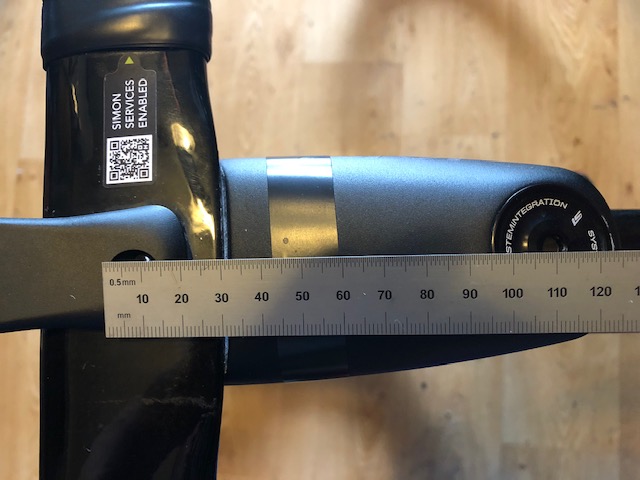 This is just fine with me, and in fact the exact right stem length for my fit, so if a change has been made to 110mm stems for the 56cm bikes, I couldn't be happier!

The bike came with 2 (Cannondale) bottle cages on it, but there is a very cool feature where you can drop the DT cage just above the BB/DT/ST junction if you are only running one bottle. The DT is quite chunky down there, and definitely looks like it would shield the bottle really well. If you are racing crits, ride shorter distances or just don't need to drink a lot on rides (at least between refill opportunities), the single DT bottle option could be the way to go.

Wheels: Super nice, again hard to tease our their performance within the overall system, but they sure don't seem to slow the bike down. Dual drain holes - my mechanic was impressed by this! Haha. The relatively wide internal width makes for a great ride and handling, and while I haven't yet taken the bike down any >70kph descents in gusty crosswinds, the rim profile and my time on the bike so far has me cautiously optimistic on that front.

Anyone tried one of these frames with enve 4.5 AR wheels?
Top

Yes, having to put on a new derailleur hanger is a workaround for sure. If you live somewhere you'll be indoors for months (I do) it could be worth it. But it's nice to know something is possible!

I don't know any brand who makes a trainer skewer for speed release yet, though I expect eventually someone will make one.

Good link to trainer axles, thanks. Unfortunately they don't specify the number of leads. I assume they're all single-lead, since nearly every through axle is... until Speed Release.

Double-lead means there are two thread starts instead of one. With the same 1 mm pitch, the helix angle is twice as steep with double lead as with single. That's how Speed Release threads into the dropout with fewer turns.

I found this image with a google image search on "double lead": 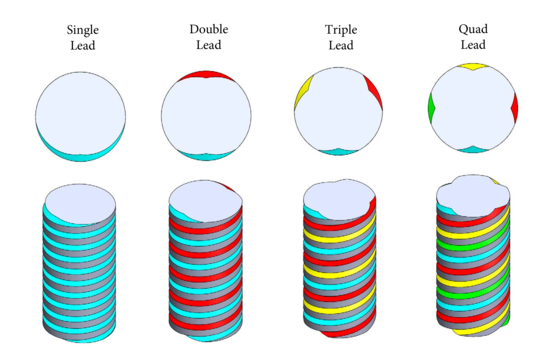 In the second image you can see the thread has two leads: a blue one and a red one. Then look at the helix angle, and you can start to see it's faster with more leads. On the double lead image, the blue thread only needs about 5 turns to traverse the whole length of the bolt, compared to about 10 turns with the single lead thread on the left.

Easy solution: use rollers instead of a trainer!

Okay I'm kinda joking but not. No axle/hanger to change, it's more gentle on the frame and tires but it's also 30x more fun than a trainer!

Also, personally, I'd prefer to use a crappier bike for trainer/rollers duty. A good bike doesn't matter there and aero matters even less!

I'd rather save the wear on bearings/drivetrain of my good bikes so I get more life for real riding outside where the nicer bike actually feels nicer. Obviously that makes sense if you already have a few bikes.
facebook
instagram
Top

Thank you, Great explanation. Nice to learn something everyday.

To both having direct drive for easy switch to trainer without changing axle and also not posting stress to the frame even with sprints,
I think Kurt Kinetic R1 is interesting. Not released yet though. https://www.dcrainmaker.com/2018/09/kin ... drive.html
Top

Thinking of getting systemsix, but don't like KNOT frontend: massive stem and prop handlebar.
Wonder what can I replace it with? I've never seen bike in person, but standart stem looks strange on a bike like that.
His: Specialiez S-Works Tarmac SL5 Disc.
Hers: Cannondale Synapse HM Disc
Top

Certainly to each their own, but I can tell you that the KNOT front end seems very well thought out, is very stiff for great sprinting and precise handling, and the cable management is clean as can be. I wouldn't get this bike with anything other than the KNOT front end, or at least another front end that allows for internal cable routing like the KNOT system does.

I was looking at different bars, and it looks like Madone bar might be a good choice. It's one piece, so you lose adjustments, but cable route all the way through the stem.
Having a Madone bar on Cdale is a different question though.