This frame is pretty much the same weight as my old SystemSix (although that was a 58), I got that down to 6.4kg with first gen Di2.

Therefore I would expect that with a few component changes this CAAD12 can be made respectably light.
Top

CAAD997 wrote:How do you plan to remove the paint from the fork? Sanding?

The fork was stripped by the following method:
-Citristrip for 12hrs (to break up the hard clearcoat)
-Razor blade (a few hours in total, I did not keep track of time here as I did this in between other things I've been working on)
-Sand paper, 400, then 600, then 800, then 1200 just to finish it off. This had the least amount of time as I was basically at the carbon level.

Why Citristrip? Because it's a very low-acid, very slow-processing stripper. I asked a friend who works at Boeing what I options I had and he recommended it "in a pinch" if I "couldn't get a hold of what they use here" (whatever that is, he didn't say, but I imagine it isn't cheap). Basically a commonly painted CF item will go in layers, starting from the exterior:
-Clearcoat (hard)
-Color paint (soft)
-Base paint/primer (semi-hard)
-Carbon Fiber (hardest)

Once you get past the clearcoat things get fairly easy. If you hit carbon you'll know it.
On a fork such as this there are a lot of different layups used, sometimes compounding and tucked tightly with each other, which leads to difficulty in determining if there is any basecoat left or you're simply hitting carbon which is shining differently due to that one area's angle to the light source.

The weight below is as far as I'll take this fork, really. I'd say it's about 99.9% stripped of all clearcoat, paint and base. The only remnants are in the small holes near the fork ends as I'm unable to get in there with my tools (and I don't want to use a rotary tool on this as that will be too powerful). If you're taking a look at the pictures and thinking "he missed a spot"... maybe, but I've checked carefully and as far as I can tell it's the carbon making an odd shine due to that angle at that moment. 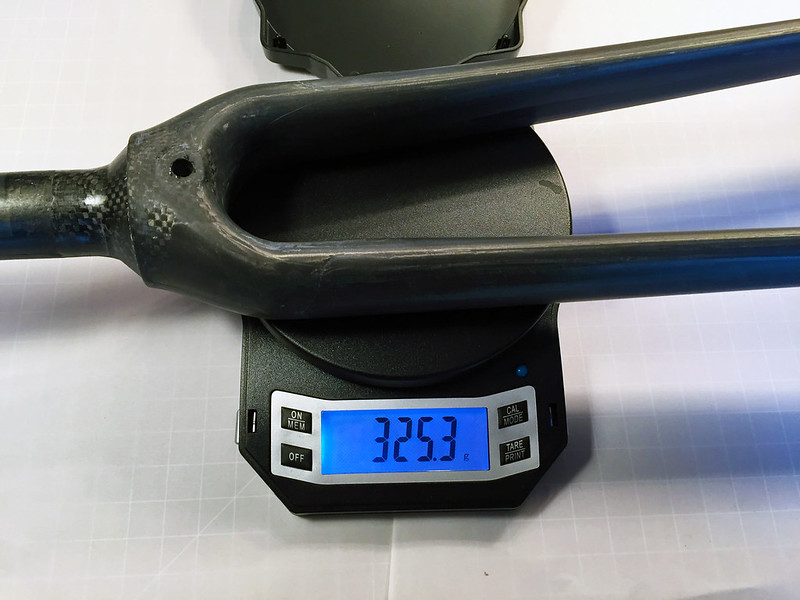 The frame is currently being chemically stripped. As far as what it will look like when this gets re-built I'm undecided on the method just yet: originally I wanted to go with powdercoat as Prismatic offered what I was looking for, but few, if any places, can do highly detailed masking jobs. The guys who are stripping the frame have drawings and specs of what I want to do and they are going to get back to me with recommendations... it may be a combination of taking the electro-masking tape and cutting the decals manually with an X-acto knife and a three-part anodizing process with some glass-bead burnishing in between a few of the steps. We'll see... 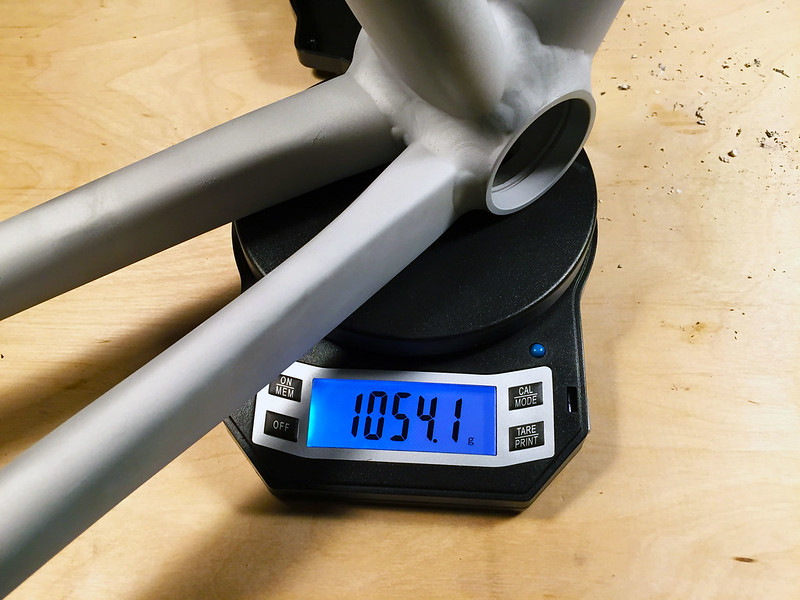 It was not blasted, it was chemically stripped. See the prior note about it.

Nice work in there... and that's a really good weight for the alu frame!
Keep us informed with the progress.
Top

Dammit wrote:This frame is pretty much the same weight as my old SystemSix (although that was a 58), I got that down to 6.4kg with first gen Di2.

Still my favorite Cannondale and imo the best frame they ever made. I have owned and ridden quite a few Cannonade's over the years, from multiple generations of CAADs (all the way up to the 12), SystemSix, Six13, SuperSix, Evo...etc. The SystemSix is still the best all around frame and the one that I'll never get rid of.
"Marginal gains are the only gains when all that's left to gain is in the margins."
Top

89 grams of paint and stickers on the frame !!

Question you may be better off answering than I, does annodising add much if hardly any weight? Considered annodising the whole thing for bling factor?
Top

^ No, anodizing a frame doesn't add any weight.

viewtopic.php?f=3&t=408
"Marginal gains are the only gains when all that's left to gain is in the margins."
Top

There's a much, much, much better topic on the information. It was linked earlier in this thread as well. Do some reading, it's worth it.
viewtopic.php?f=14&t=99123


TLDR: Anodizing saves weight but it often looks like shit on a welded frame and does not last unless you go with a basic Mil-spec III color.
Exp001 || Other projects in the works.
Top

Prend has managed to capture my attention for a bit. I'm impressed. Good to see this rollover marketing junk being scrutinized more closely. Yields some idea as to the true quality of goods being flogged off to the masses.
Top

superdx wrote:That's crazy heavy, the frame is 1.1kg? I thought it was supposed to be lighter than a CAAD10 frame. This actually looks *heavier*.

Claimed weight is 1098. Claimed weight for a painted 54 10 was 1150, so a 12 IRL is lighter. In the interests of comparison, my 54 CAAD10 in White came in at 1260 stripped, so this weight is in or around what I expected. Naturally claimed weighs are going to be with the lightest paint job. I don't see the derailleur hanger listed seperately, so it may also be included.

The fork is a big saving, though. My CAAD10 fork was the guts of 430g, without crown race and with a similar length of steerer. For another comparison, an 2015 SS Evo Hi-mod fork uncut is 336g out of the box.