my guess was m9... that frame looks slick.
Top

Vias is tied with the Madone in terms of aerodynamics. However, tour magazine uses the results from the windtunnel to calculate the time that you need for a 100km and 1000 vertical meters course. The Vias loses there because of the - for a racebike - obscene weight.

Overall winners are Canyon Aeroad and the new Scott Foil, tied for first place. I have the issue here and can translate if there are questions.

tour stated the only reason madone did not win overall was crappy cork brake pads + mediocre rr on the bonty tire.

"madone is the new benchmark for racing bicycles"

zipp 404 firestrike used as a control wheelset
the disc equipped rose scored quite well with zipp303 disc wheelsets. only 8 watts slower the madone/venge.
the zipp firestrike test faster on the venge vs rovals..
cervelo with exposed housing/standard shimano brakes only 1 watt slower than madone/venge
Current Rides:

How did the new Cervelo s5 do vs. the Madone 9 aerowise? On the Trek numbers the s5 beats the m9 in yaws near the center.
Top

Here are the windtunnel results
Black bar is with 404 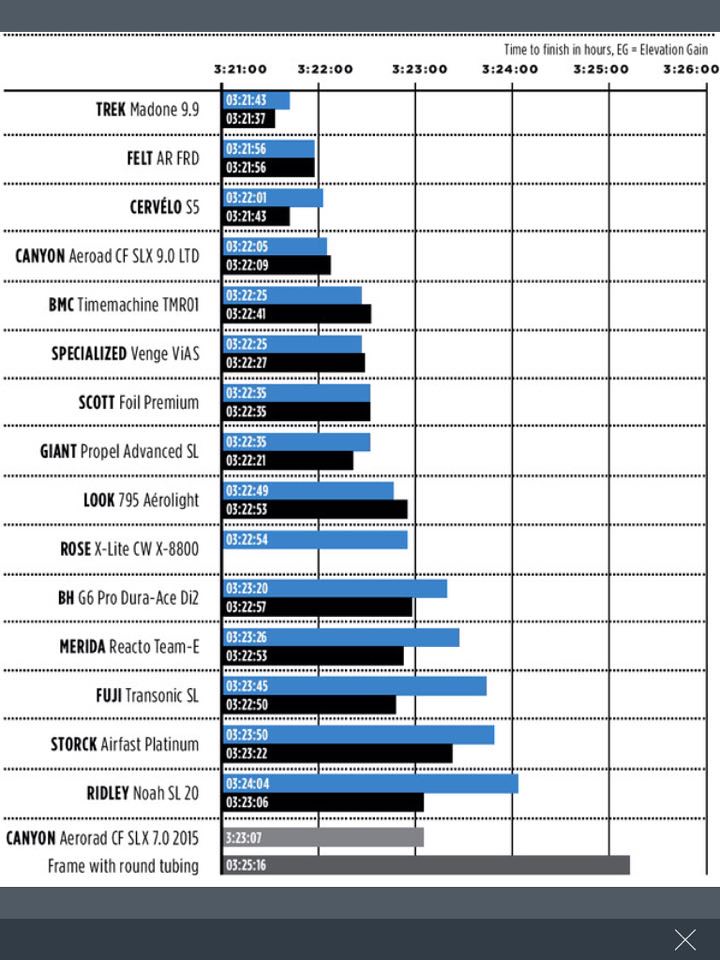 how it was graded you cant buy fitness, but you can buy advantage.
Top

Shame no Pinarello. I wonder how the F8 stacks up against the competition? I thought it was considered to be an aero bike.
Top

Bear in mind Canyon is the cheapest of the bunch.

Im just surprised how venge vias is so fat. Really 7,6kg?!
Even as in straight line it is fastest, but still...
Top

New Venge and Madone both had 204 watts of drag but as soon as the road starts kicking up slightly the extra 866g the Venge has will have an impact. In reality there won't be much difference since the UCI weight restriction kicks in. I'm pretty sure the VIAS can shave a lot of grams if needed and get close to the 6.8kg. The Madone seems to be more comfortable which shouldn't be underestimated.

I think the Aeroad is a really good option. Cheaper, almost as aero (+4 watts) and generall a very good allround option. The Foil seems to be just as good but is slightly more expensive. Seems like the best bike since it only lost out on a win vs the Aeroad because of worse tires.

The times posted are just calculations of bike drag/weight over a set distance with altitude. It does not take into account that the Rose with disc brakes would gain some time during technical downhills and even more so when the roads are wet. I thinkthe Rose surprised me the most.

I guess my felt is still relevant for 2016.
Top

I dont think tour has ever tested Pinarello, at least in the pass years. They did say some manufactuere dont want to submit the bike for review. Colnago is one if i remember correctly.

F8 must be pretty aero or at least not far from the current leader (bar madone and vias). I remembered chris yuu and Felt engineer said it was up there in their private wind tunnel comparison when they build AR and Vias. Also seeing the aerodynamic know how of jaguar displayed in the Bolide which did help Brad win Hour record, the f8 must be pretty good aeorwise. In some interview from Brad's staff they mentioned the bolide is as fast as it gets. They dont feel disadvantage using the frame.