This now seems to be live although there were no available shipping options to UK. 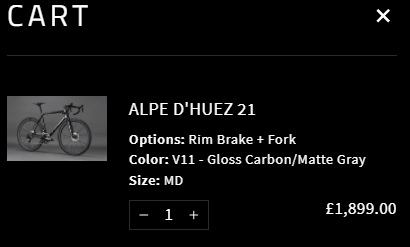 @bobones: Yeah same, the checkout process stopped at shipping as no options available; guess the system is still being completed? Also, it looks like they dropped the Translink version for Scylon now as there are only three options to choose from (rim / disc / disc with AKTIV).
Work, cycle, climb, rest, repeat.
Top

This now seems to be live although there were no available shipping options to UK.

Doubt they'll offer it unless they use a logistics provider that deals with everything (expensive & likely not worth).
Top

The good news (if you're in the US) is that you can now add frames from the online site to a cart. Others had been able to add to a cart recently, but I had not been able to do so until today.

The bad news -- You can't actually purchase that frame you added to your cart if you live in the US because the list of shipping countries does not include the US (for me anyway). I see Australia, Canada, New Zealand, and the UK offered for shipping. But no US at all, so I can't comment on shipping to the US.

Meh news -- Stems and handlebars still do not offer a purchase option. Booo!

And so continues the world's slowest rollout / relaunch.
Top

Almost seem like a bargain compared to many recent price hikes of Specialized, Trek and even Giant.
Top

Looks like they have shot some brand new promo videos and detail / clsoe-up photos for the tech they use, and a soft rebranding of how they call them:

RTM - Resin Transfer Molding (We all know this one. A small section about the advantage of having less environmental impact versus pre-preg was added in this page, but I feel they could stress this even more as the plastic waste from pre-preg production is quite serious.)

AVD - Aktiv Vibration Damping (No video shot or digram made for AKTIV forks, maybe it's still work in progress.)

All in all, very stoked about what's to come next!

I don't think any new models are coming out in the near future. They've been kept on life support for years with presumably no money going into R&D.
Top

StiffWeenies wrote: ↑
Tue Dec 07, 2021 7:24 am
I don't think any new models are coming out in the near future. They've been kept on life support for years with presumably no money going into R&D.

There was a video out a few weeks ago from an event in France where it was hinted at that a new frame is coming out. With the removal of the Fluidity from their site it is assumed that Time will be launching a gravel bike of some sort in the near future.

As for being kept on life support with no money going into R&D, their new owners have stated that one of the reasons they bought Time was specifically for their technology and that they plan to expand their lineup, but it won't be instantaneous.

I certainly have a better feeling about Time under their new ownership than I did at any point in time when they were owned by Rossignol.

Now if they'd just start selling online to the US I'd be all over a new Alpe d'Huez 01 in a heartbeat.
Top

They let me put an Alp Du Huez 01 sz 57 in my cart and got me to payment for checkout in Canada. Free shipping and all. Nothing mentioned about no stock.
viewtopic.php?f=10&t=154188
2018 Colnago V2R Rim Brake
2019 Colnago V2R Disc Brake
2014 Norco Threshold Disc Brake
2006 Ridley Crosswind Rim Brake
Top

If they're going to launch a new bike (or bikes) this year, I'd imagine it'll have to be this week or next week. Unlikely they do it in Xmas / NY weeks.
Top 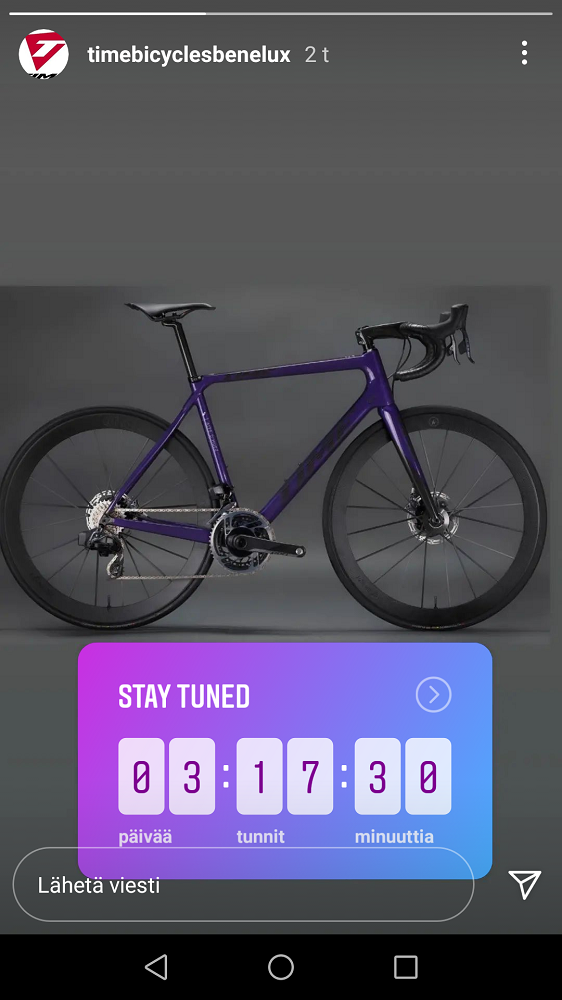 They're out of things to give new paintjobs to.

Question is whether it's just the gravel frame, or something else too ... that video from the French Gravel / MTB event hinted they might launch more than one before the end of the year.

Personally I'm most looking forward to seeing what they do with an all new full aero bike, or a revamped Scylon some time next year. Mainly as I'm happy with my Revolt for now.
Top

I hope it will be a gravel frame. Would be a good addition to get more visibility. If not gravel, then maybe something to do with Scylon as it's pretty outdated. I don't believe they would update AdH at this point.

New owners have been pretty quiet with marketing and social media so it's hard to expect anything big. Hopefully I am wrong.
Top

Yeah, they're not the most be polished in terms of marketing, but with the revamped website and direct sales it has improved somewhat.

That said, nothing is mentioned on their FB page or Website with respect to this counter so not exactly a joined up campaign. It is a bit of an odd time to launch a new offering but I hope it's not just an Xmas special paint job!
Last edited by bikewithnoname on Fri Dec 10, 2021 10:58 am, edited 1 time in total.
"We live in an age when unnecessary things are our only necessities." Oscar Wilde
Top
Post Reply
123 posts