But.... it always looks to me more like Cancellara's hood height is priority1, so that a 90 degree arm bend on the hoods puts him close to his usual TT torso angle?
And the rest is just left to follow on from that choice?
Top

^this. Its the most aerodynamic position on the road because it reduces the frontal area of the arms and brings the hands higher and more in line with the hips. Everything follows from there. The drops can be probably almost as aero, but for a breakaway/TT specialist this is key. I know quite a few people with similar riding styles that have their bikes setup that way and almost never use the drops or only use them in a sprint situation.
Don't take me too seriously. The only person that doesn't hate Froome.
Gramz
Failed Custom Bike
Top

I've not run numbers, but surely the frame is around 1.8 kg to blow out the UCI limit by 800 g. Saddle and pedals, good chances to gain weight, are light.
http://djconnel.blogspot.com/
Fuji SL/1
Top

Maybe the supposed high weight of the bike is part of a disinformation campaign to add to the Jens mystique.

Of course! I can be very dense sometimes I saw on VeloNews he bends handlebars in his teeth. 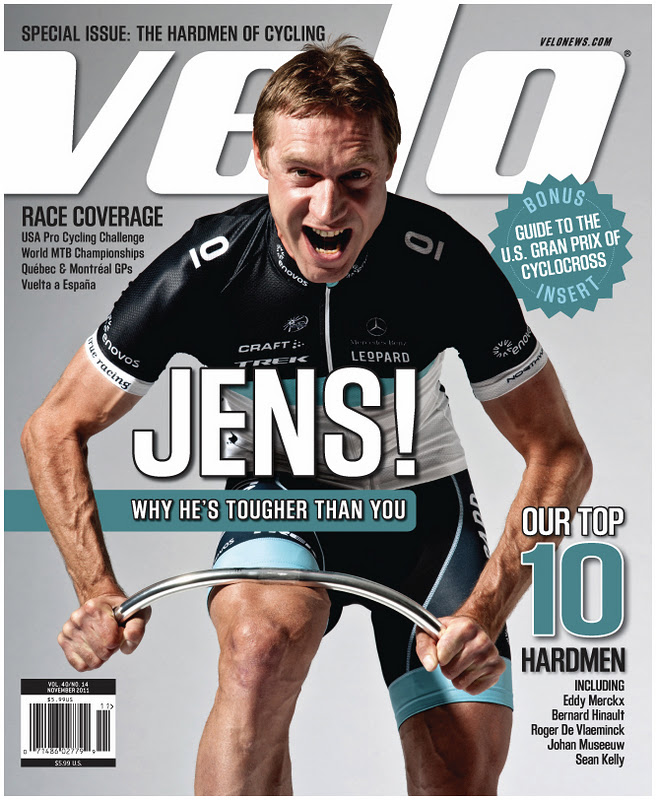 Gerard is not impressed.

Then again, Adam Hansen isn't sprinting for the win so often.

I thought that Cancellara going to the line against a sprinter would endorse the position he uses, if anything.


And as for the various hip angles and power, road cycling is not dependant on peak power production. "It's an aerobic sport dammit!"
"Physiology is all just propaganda and lies... all waiting to be disproven by the next study."
"I'm not a real doctor; But I am a real worm; I am an actual worm." - TMBG
Top

I think the point of the photo was the difference in this particular case was Greipel's hands were further back (being on the drops) and therefore his wheel was further forward (more room for a bike throw), and that alone was worth the victory. Of course, counterargument is Cancellara wouldn't have even been there with higher bars and hands on the drops, because he'd have been less aero. But we have no way of knowing that.
http://djconnel.blogspot.com/
Fuji SL/1
Top

http://www.cyclingnews.com/news/apology-to-trent-lowe
I, for one, am very happy to see this published.
Trent had his career destroyed by the rumors and innuendo, so much so, he has given up road completely and gone back to mtb AFAIK.
Top

Ha! Totally giving him the benefit of the doubt!

Not that I care what he did or didn't do but once again I find myself amazed at the faith cycling fans have in the athletes!
Top

Love,
CyclingNews
I never took drugs to improve my performance at any time. I will be willing to stick my finger into a polygraph test if anyone with big media pull wants to take issue. If you buy a signed poster now it will not be tarnished later. --Graeme Obree
Top

so if sven retires, the rainbow jersey just never features in the next season? has that ever happened where the current world champion doesn't participate and wear the jersey the following season?
Anyone living in Russia can help me out source a part? [7/2/19]

Sven will certainly ride the 2014 season. He was only in doubt whether to continue after that or not.
Top

-Robin- wrote:Sven will certainly ride the 2014 season. He was only in doubt whether to continue after that or not.