The magnet one? The magnetless is not less bulky than the Garmin one

@Delorre: Yes, the magnet one... very similar to the discontinued Garminn GSC-10 in function and setup... 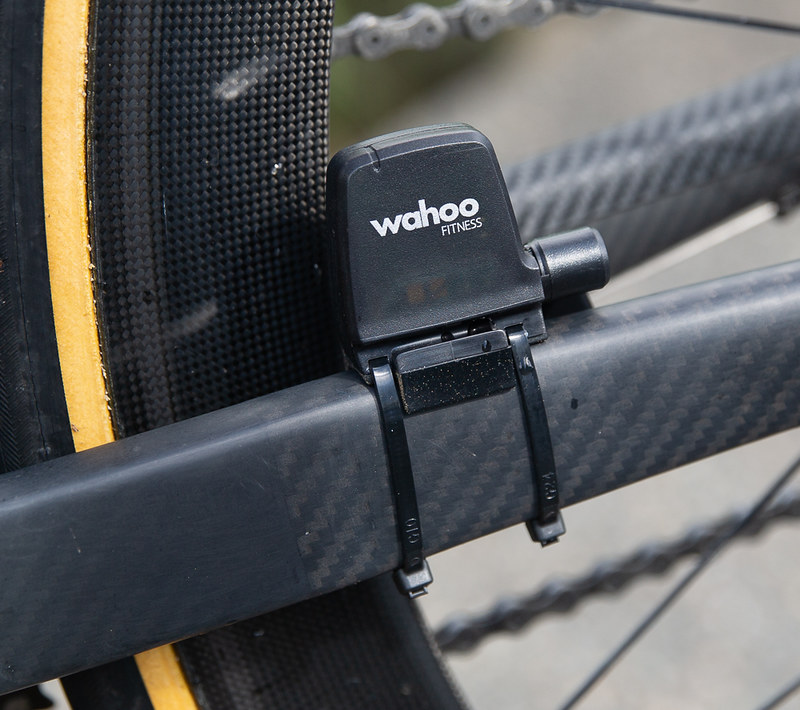 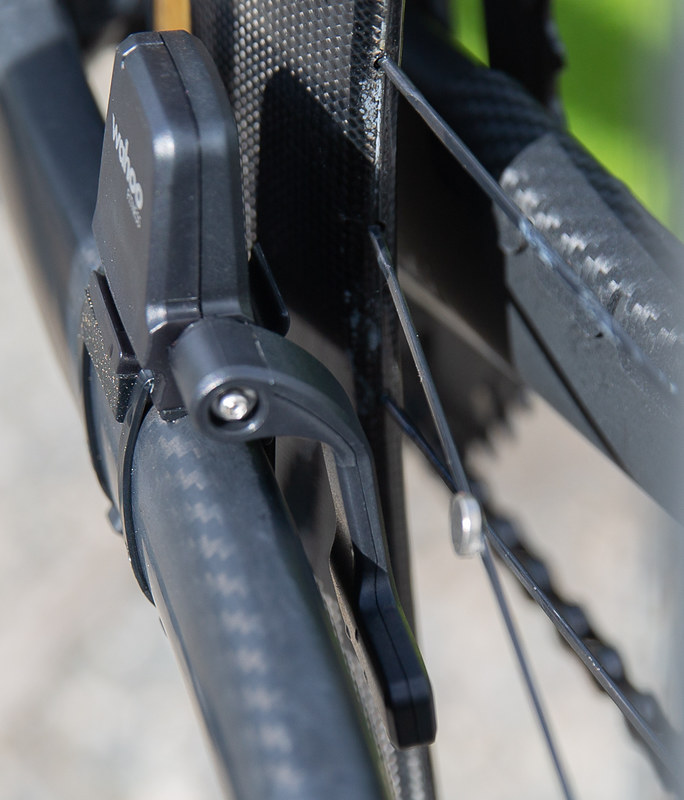 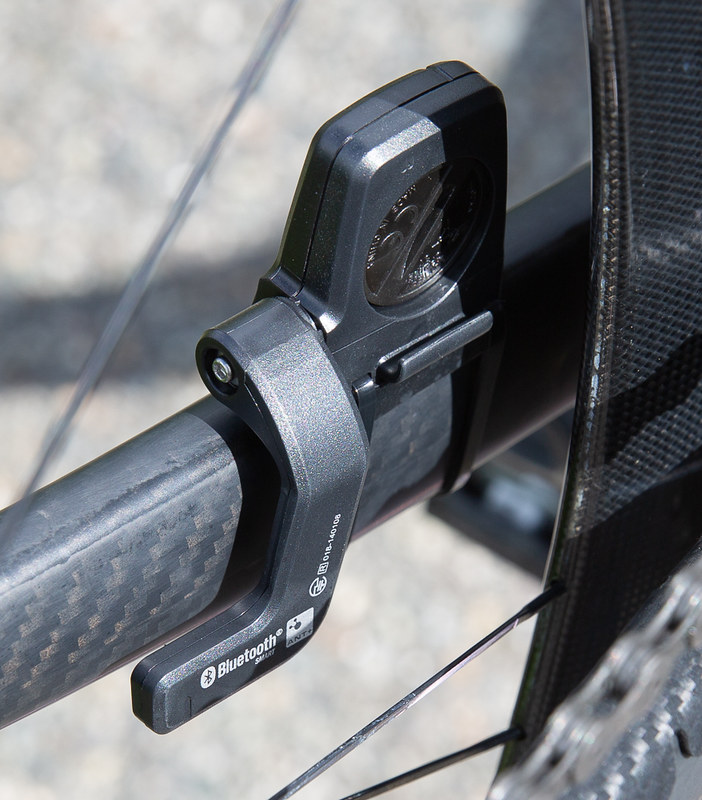 I tried out the magnetless sensors today. About 4 times my garmin "auto paused" and then immediately "auto resumed". Otherwise they worked flawlessly.
Speedplay is the devil!
Top

Hey Calnago, you may want to flip that sensor to the underside of the chainstay. The reason to put it on the underside is that if it ever gets bumped in while mounted there, the spokes will just knock the sensor back out. With it mounted in the top, if it gets bumped in the spokes will catch it and yank it in, possibly breaking it and some spokes.
Age and treachery shall overcome youth and skill
Top

No... I have it like it is for that very reason. If on the very unlikely chance the spokes has r magnet hit the arm, they will just slide off it as they go by. Versus when the arm is pointed up, it would be much easier for the magnet or spoke to just jam into it. And have bad things happen.
But maybe you mean mount the entire thing underneath on the bottom side of the chainstay? Trouble with that is the articulating arm would kind of be backwards. And the ugly battery side would be exposed. And the indicator light would then be on the inside (talking about the Garmin GSC-10 now).
Just this minute got back from a ride. Here’s the Garmin setup... 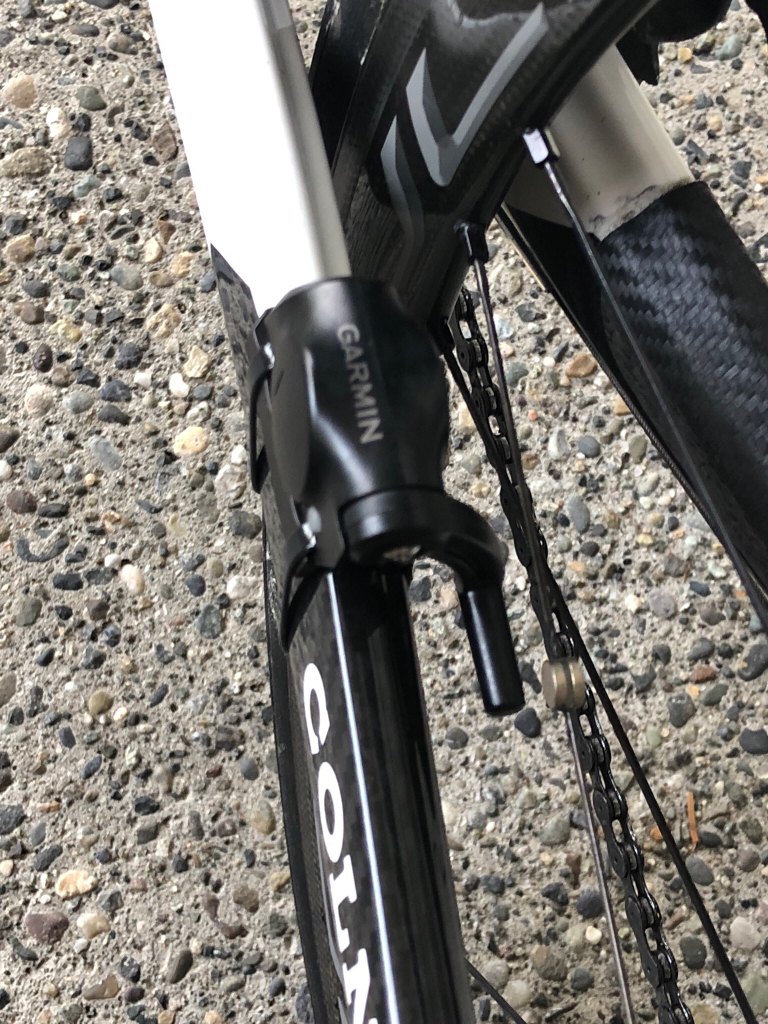 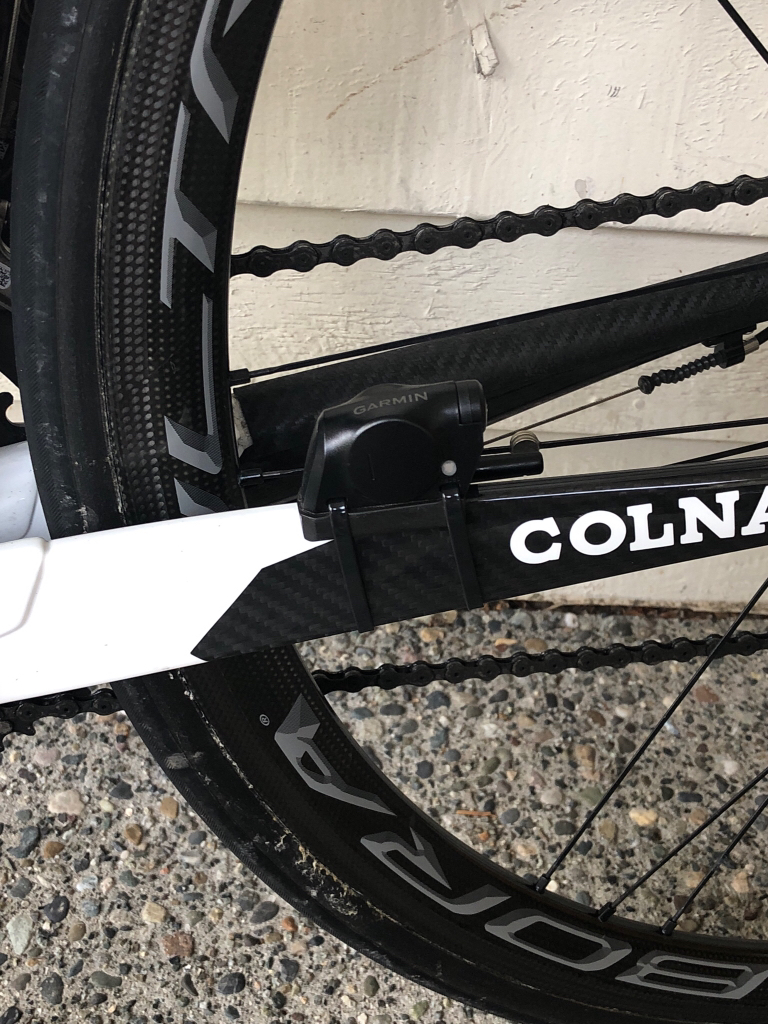 I think (would have been years ago now) I looked into mounting it underneath but it was awkward at best.
I’ll take a look at the Wahoo setup tomorrow.
Used to see so many Pro setups with the speed sensor on the back of the front fork and is just cringe thinking about the sensor getting knocked into the spokes versus if the sensor was not the front of the fork leg it just gets pushed away in that event

Thing is, these sensors are so solidly mounted they’re not moving. But thanks, cuz those are exactly the kinds of things I always try to think of when mounting things like that.
Colnago C64 - The Naked Build; Colnago C60 - PR99; Trek Koppenberg - Where Emonda and Domane Meet;
Unlinked Builds (searchable): Colnago C59 - 5 Years Later; Trek Emonda SL Campagnolo SR; Special Colnago EPQ
Top

I never had issue with either of them. Battery replacement about once a year. The cadence sensor has moved to the trainer bike since my recently acquired power meter has cadence built in. I've ridden without the speed sensor when I've forgotten to change the battery for a month straight but I don't like how the speeds can be inconsistent based on gps alone.
Top

Im using garmin speed sensors now. It can be quite inconsistent at times and speed reading fluctuates pretty often. Does anyhow experience this??
Top

I don't know how one could "elegantly" mount the GSC-10 or the Wahoo combo mount under the chainstays. One option if you already have a PM with cadence reading is to use Bontrager's speed-only sensor. I think this one certainly looks better when mounted underneath the chainstays.

As a side note, they come with a couple of different sized rubber bands which are more gentle to the frame finish, and also easier to remove for cleaning (but can also be mounted with zip ties). They let the sensor move more easily though: I got it knocked out of place (and not picking up the magnet) a couple of times when placing the bike inside the car with rear wheel off - it was just matter of remembering to put it back in place.
Top

mdeth1313 wrote: ↑
Mon Jul 09, 2018 2:28 am
I tried out the magnetless sensors today. About 4 times my garmin "auto paused" and then immediately "auto resumed". Otherwise they worked flawlessly.

Did you place it in your front or rear wheel? When mounting it in the rear wheel, the distance between the sensor and the computer can be to long. hence the dropping in readings.

I had mixed problems with the Garmin magnet-less sensors. They use accelerometer chips that I found would miss revolutions. The one on the crankarm was only dealing with up to 160-170 rpm on a track crank, and yet it would have frequent blips where it would lose one revolution. This doesn't show up as an obvious data gap, but it does mess up your overall data.

Plus, they are hideously ugly. I use the GSC-10 or the Wahoo equivalent. (On the track you can't reliably use GPS data because of resolution is down just a bit, or even if the computer is trying to average data points, the tracks can look really odd on anything but a very big track.)
Top

I use the cadence ones. Put a blob silicon sealant on the 'Garmin' side, (the 'wrong' side) and then press it against the inside of the crank arm. It will stay put 100%, and for battery changing you can open the battery cover which now faces out.

Agree the speed sensor is an ugly MoFo. I put it on the back hub so I don't have to see it.
GCN auf Deutsch https://www.youtube.com/channel/UCfbh0P ... 45127kHo8Q
Top

I have both. The GSC-10 is cheaper, uses 1 instead of 2 batteries, and its battery life is better.
Top
Post Reply
27 posts