I do like the UD laquer on the chainset.

Logos will grow on me with time, I'm sure.

Are those the Shimano PD-540 pedals? If so, that does make me chuckle a bit!
Top

They are, I have a pair and they may be low end, but they're pretty good for the money! They do weigh 325 grams though...

When I bought the bike, the previous owner told me it'll keep them. When i left him with the money, he gave me this pair, since he decided to stop riding (his words...but the bike was REALLY a bargain). I intend to buy a used pair of D.A anyway
Last edited by Pierrotdu37 on Thu Jul 05, 2018 7:21 pm, edited 1 time in total.
Top

I guessed they would be temporary. Not going look to appease the pedants!?
Top

well no, no Look pedals. BTW, previous owners of this bike (2 or more?) were not very careful. Look at the saddle tube seatclamp. Don't know how much they charge for this single piece of kit, I mean an original one?:

Oh and they also placed a 27 mm saddle post, from Time, with a reductor inside the saddle tube. The shop offered me to buy an original Colnago seatpost. I said OK but the price is really a shame!
The previous seatpost, good quality, but in poor condition (the matte carbon finish matched perfectly though):

This looks like someone who has no idea what they are doing!

I hate seeing that on carbon or indeed any posts.

Maybe if you use some very fine sandpaper you can tidy it up?

Seatclamp is easy to replace, about 40EUR on eBay, but plastic/metal not carbon.
Top

@Pierrotdu37: Oh my, we need to help you out a bit here. The previous owner(s) were animals

First of all, get a new clamp, and I'd recommend getting a new Campy clamp as it's much better than the Colnago clamp anyway.... and get a post of the correct diameter for the frame... don't be messin' with shims etc., except as a last resort. I really like the BOB Deda Superzero posts, as they have a 21mm offset, which is perfect for me. Versus the 15mm offset that comes standard with Colnago posts... I can use it, but it's just that it clamps the rails further forward than I like. But you, judging from the pics, might want to go the other way... in which case the Deda Superleggerra RS is only a 12mm offset, and I think you can get it in a zero offset as well... haven't checked for a awhile. 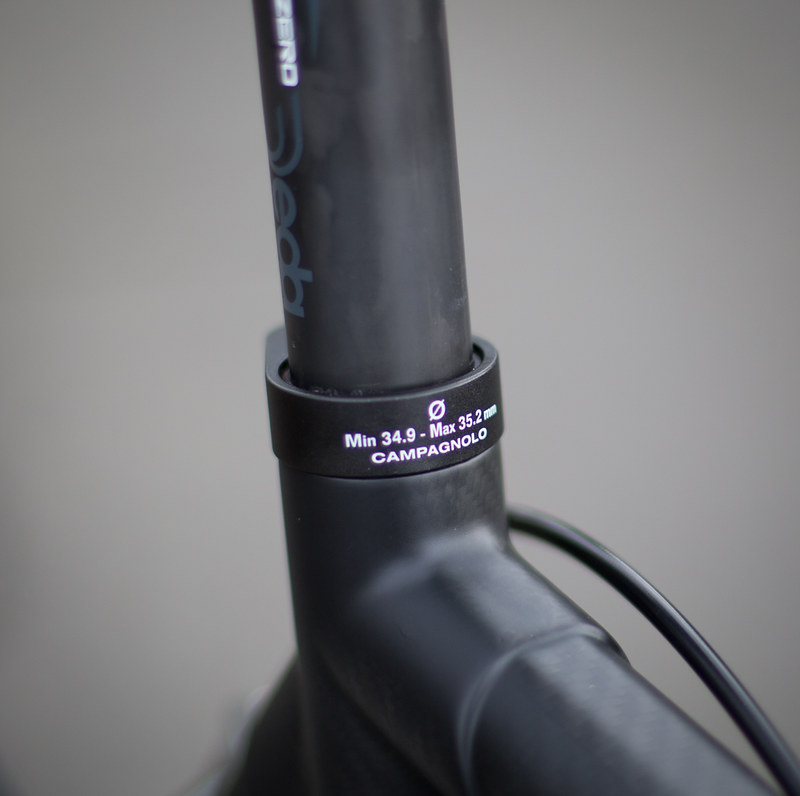 Now, onto your rear brake cable routing issue that you posted in the Campy 12sp thread. I just quoted your post into this thread since it's not really related to the 12sp campy stuff and you don't have a thread of it's own, so this is as good a place as any...

Pierrotdu37 wrote: ↑
Thu Jul 05, 2018 9:34 pm
BTW, saw one of your post concerning the O'Ring you placed to prevent the coating to slide in the top tube. I asked him to do something this kind, actually he has some housing tips that do the job very well. The shop clerck/mechanics told me that the previous owner left the full housing inside the top tube.

Ok... first of all, the C59 has an internal guide throught the top tube for a continuous brake housing run, meaning the housing goes all the the way from the levers to the brake with no cuts, and no stops... you just route it right through the top tube. You referred to my post in my C59 thread where I used an 0-ring to stop the housing from sliding back through the top tube and looking less than perfect. But what they did with your top tube I'm not quite sure... there's a stop/ferrule of some sort jammed in there where it shouldn't be. You gotta get that out. It also looks like the matte clear coat is chipping away around there, probably because of that ferrule jammed in.

So, here's my advice. Take a brake cable and run it through the front and rear entry/exit points of the top tube. I'm saying to do this as a precaution because I don't know what the previous owner has done, or if the internal guide is still present or removed. Having a cable run through now will just make things easier if things go wrong or we discover something in the next step... if something goes wrong no worries... you can use one of the magnet kits for routing electronic wires through tubes to guide the brake cable back through.
Ok, now get those jammed in ferrules out of there... use needle nose pliers to grip the edge and pull it out. If there's one in the front, pull it out too.
Now, pull the cable back into the top tube so that the end is out of sight and inside the top tube, then push it back and see if it comes out easily through the exit port. If it does, that's good, because you know the internal guide is still intact.
So, I'm assuming those ferrules were being used as "stops", and that the break housing is in two pieces? One piece going from the front lever to the front stop on the top tube, and the other going from the rear exit port of the top tube to the rear brake? If so, you'll have to get some new brake housing to run a complete uncut line from the your lever, through the top tube, then to the brake. And that's job done for running the brake line.
Then, as a final finish and to prevent the housing from sliding back into the top tube through the rear exit port, it's easy. Just cut a small o-ring (the size that would fit around the brake housing like I showed in my other thread) exactly in half. Put that half underneath the housing and push it back with a small wooden stir stick from your coffeehouse of choice. So much easiser than what I did, since I first thought I could just use the entire uncut o-ring but that meant I had to undo the rear brake cable to slide the o-ring over it. It was only after I discovered that it was a much better, and invisible fit, if I cut the o-ring in half and only used that as a wedge behind the brake housing...
Jamming the o-ring underneath the housing to provide a rubber wedge that prevents the housing from sliding back in... 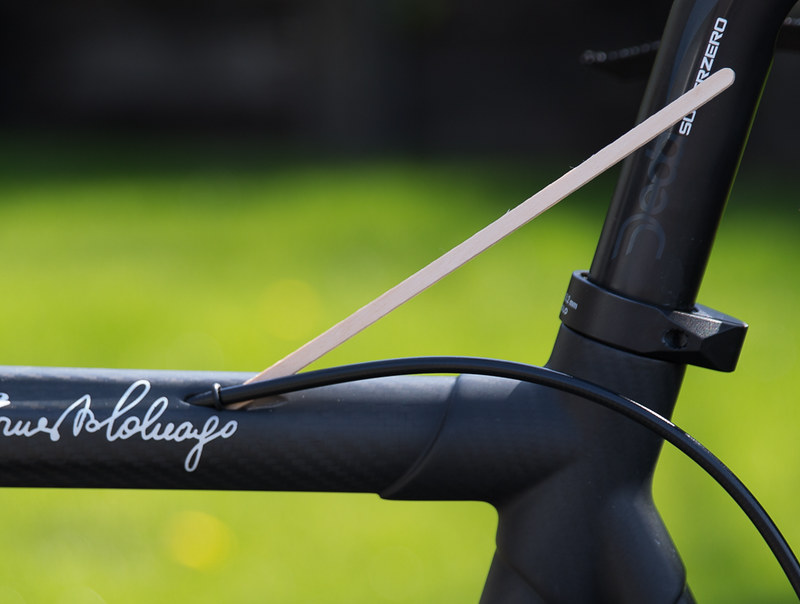 Then I realized at the end of it all, that using only half the o-ring works best, and bonus... it's even easier because you don't have to remove the brake cable to slide it through. Just cut the o-ring in half and stuff it behind the housing. The pic shows it just before I stuffed it the rest of the way so you don't even see the ends where it was cut. It's been doing it's job perfectly ever since I put it in... 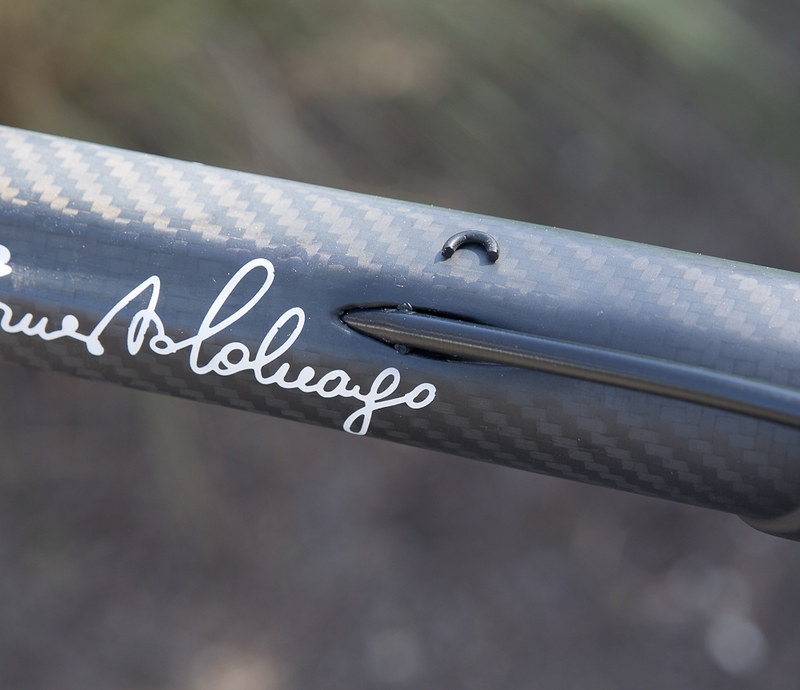 Hope that sorts out that mess of a rear brake run that you've inherited... oh, and by the way, what's "Rilsan"? You mentioned that in your post and I have no idea what you're referring to. Thanks.
Colnago C64 - The Naked Build; Colnago C60 - PR99; Trek Koppenberg - Where Emonda and Domane Meet;
Unlinked Builds (searchable): Colnago C59 - 5 Years Later; Trek Emonda SL Campagnolo SR; Special Colnago EPQ
Top

To Calnago, just 2 things:
When i've bought the bike the matte finish was already chipped around the entry/exit hole of the brake housing, nothing to do with the setup from the shop for the new 12V.
And yes it was genuinely set up from previous owner "housing goes all the the way from the levers to the brake with no cuts". But according to the shop clecrk/mechanics (this shop is a "Premium Colnago Reseller" in France) this is not the right way to do and he mounted the housing in 2 parts , one frome the lever to the front hole in the top tube and another part from the exit hole to the brakes, meaning there should not be housing inside the top tube, just a cable.

Don't know by myself what is the real proper/recommended way to do.
And finally, I don't want/don't know how to disassemble all this and replace cables/housings. I let the shop do the job, perhaps not the best idea but since the complete disassemble/setup was free if the groupset was bought/provided by the shop (otherwise billed around 200€).

And last but not least: I took the plunge and bought a saddle post in the shop, with a rebate, wich was mounted on a brand new naked frame on display , not exactly carbon patterns but matte black after all: 200€

The previous owner gave me for free this fork, new and uncut, remains in the box in the garage since no one wants it (put it on a Craig's list-like in France, got no love for it )

BTW, this is a pic the shop took of my bike set up with Boras, wich they also sell and placed it on their Pro Facebook page (don't ask me the link) without my information/consent.
I don't really care, but think it's a special way to manage their PR. They also put their brand (wich is hidden here) both sides, compulsory . I'll remove the stickers but not sure if I can use aceton?

It looks really great, a bad boy, but --Disclaimer--- this is not really my bike since the wheels are not mine.

"Premium Colnago Reseller"? Hmmm... well, the correct way is to route the rear brake housing is as you bought it from the original seller then... full cable housing, passing through the internal guide in the top tube (there are no stops), and then exiting out and down to the brake. How long have they been a "Premium Colnago Reseller"? Have they ever worked on a C59 before? Because from what you've said, it seems not. Cutting the housing and inserting stops where there were never meant to be any is definitely not the "correct" way to be routing the C59 rear brake housing.
Colnago C64 - The Naked Build; Colnago C60 - PR99; Trek Koppenberg - Where Emonda and Domane Meet;
Unlinked Builds (searchable): Colnago C59 - 5 Years Later; Trek Emonda SL Campagnolo SR; Special Colnago EPQ
Top 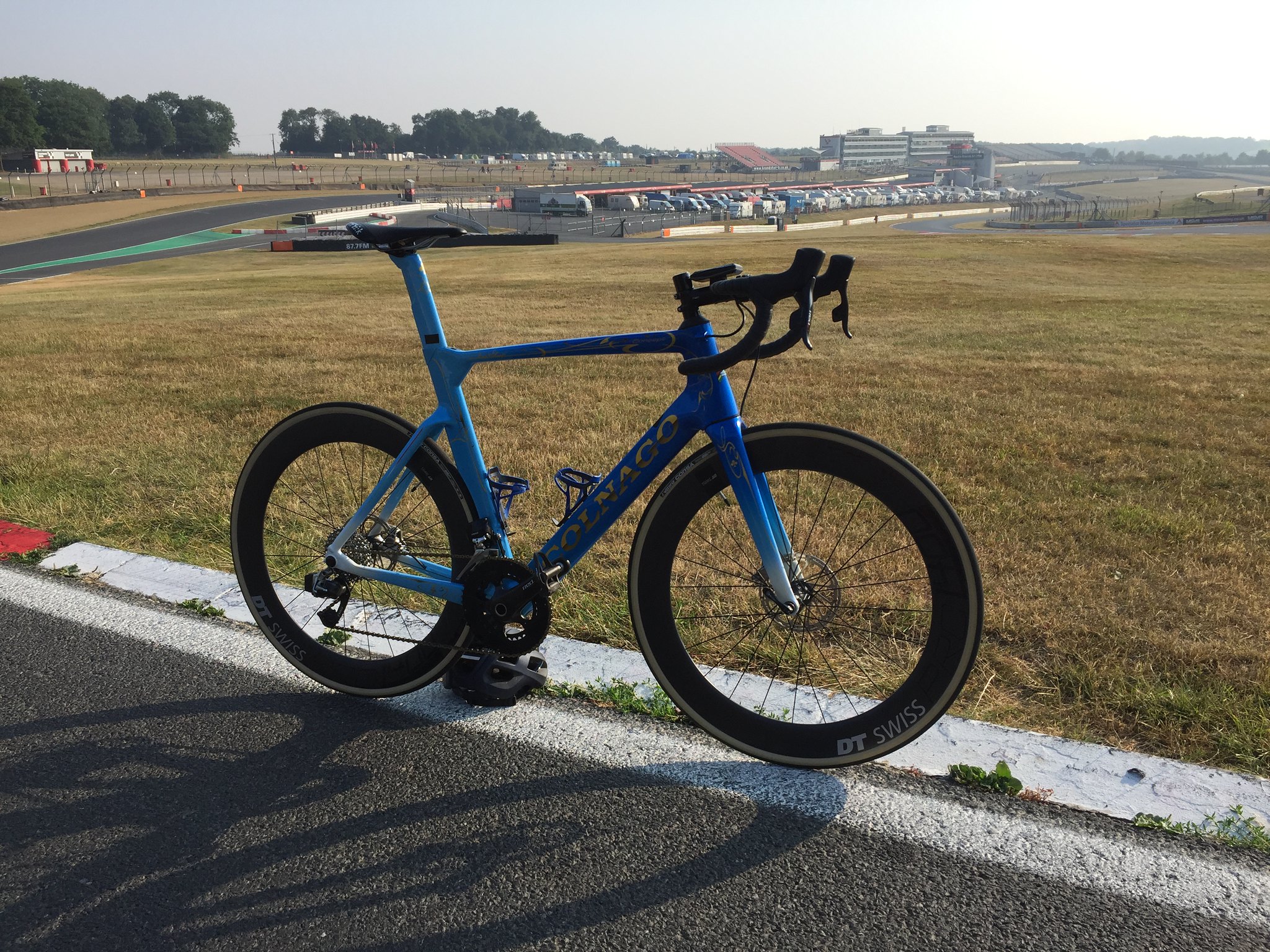 Worth bearing in mind that you can assume everything calnago says about Colnago should supercede whatever your reseller says. Your seller is definitely wrong about the rear brake run
Top Just got to have it