by ericoschmitt
Hi, I have ordered and received one of these:

I have used the one from Park Tools before at two different shops and decided to get this one for myself. It's very accurate and reliable, it does measures 0.01mm variations and repeats it's own measurements within that margin, sometimes 0.02mm.

Only issue is it came with a simple printed table of conversion to Kgf for round 1.6 1.8 2.0 and two bladed pillar sizes. And that table doesn't seem accurate at all.

I have measured spokes from some 10 wheelsets and all of the readings seem to tell me they are very over tensioned according to the provided table. This includes factory wheels. Often 150+kgf for wheels that measured up to 120kgf with Park Tools gauge. Some of the readings are even above whats provided on the table (160+).

So... the tool itself seems very accurate, but the table looks wrong. Any ideas of how I could reliably make myself a new table for it? The only way that comes to my mind is hanging 120kg on a spoke, and that is a bit... tricky. I do have a place where I could hang a rope with that weight, but I don't have any gym weights around and I'm not sure how to tie everything together!

On the other hand comparing the readings to Park Tools tool doesn't sounds like a good idea since that tool is not very accurate and many people report it tends to read the tensions lower. I have no other tool at hand.

by ergott
You have to apply an known tension to a spoke (hang a weight? Build a jig?) to the spoke and take readings. Only way to properely interpret readings from any tensiometer. 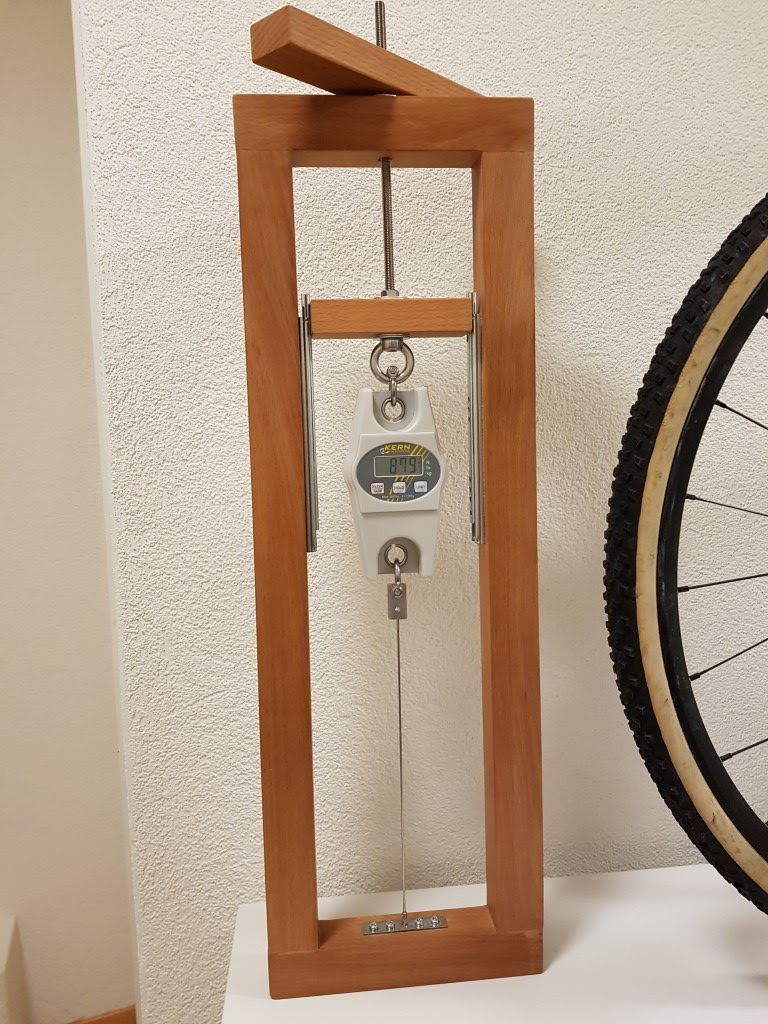 by F45
imo you should always make your own table, especially when working with thin spokes or these super light aluminum rims. It's easy to make a wood one.

by ericoschmitt
Thanks for the replies, I guess I must build some of that for myself. The one ine the pic looks really nice!

by alcatraz
What about asking the seller for a better table?

I have one that looks nearly identical and my table includes more spokes. Cx ray, cn424, pillar1420 and a few more.

by bm0p700f
I use my own jig. Even Sapim guages when I checked did not read correctly. Moral is measure your self.

I wonder how accurate that contraption is because the weigh scale isn't calibrated either?

by ergott
The accuracy of a 0ed load cell is much higher than even the best claims of any tensiometer.

by Calnago
I don’t have my own calibrator and build only pretty basic wheels using DT Swiss spokes. I have one of the Digital Tenisometers from DT Swiss and a Park Tools tension meter, simply because the DT Tensiometer does not work so well with very thin flat spokes. That said, I’ve used the Park Tools conversion table once to build a standard 32 hole 3x rim into Record hubs using DT Swiss Competition spokes (2.0/1.8/2.0). The thing is, the resulting tension ended up quite different depending on which set of charts I used. I ended up sending both tension meters back to the respective factories for calibration. I was told the DT Swiss Tensiometer was bang on. The Park needed a bit of recalibration (it read high) but even upon return the same scenario would occur. Which one was right... well, when the wheel was built using tensions from the DT Swiss chart (for their own specific spokes), the wheels have remained rock solid and stay that way barring some unfortunate mishap. But the Park Tension meter read high, and as such the resulting tensions ended up on the low side and sure enough, one day my rear wheel became noticeably out of true and upon feeling the non drive side spoke tension it was clear they were going slack. So I rebuilt the wheel with the higher tension as per the DT Swiss chart (and DT spokes). All was good after that.
Long story but highlights what Ergott is saying. The only way to know for sure is to make your own chart (if one isn’t available) using the spokes you’re using and the tensionmeter you’re using and record the appropriate tension for the particular build you’re doing. And here’s where experience comes into play. How do you know what that ideal tension is. It’s hard to know how much tension is high enough without going over until you’ve experienced what “going over” reacts like during the final stages of your build.
Experience counts for an awful lot when building wheels. It’s fairly easy to build a wheel true and round. It’s a little harder to build one that will stay that way.

ergott wrote:The accuracy of a 0ed load cell is much higher than even the best claims of any tensiometer.

Well, I'd say that's pretty much a crap shoot. There was an article in the news about the accuracy of airport luggage scales. I found this:

"Overall, the data for over 2600 scales at 10 U.S. airports studied by the reporters showed that the inaccuracy rate hovered around 5 percent."

Now this is on expensive, high quality scales that regularly get calibrated and serviced, not that cheap eBay Chinese piece shown.

10% is what is claimed accuracy for the Park tensiometer.

I wouldn't waste my time with the whole thing unless I could get that scale calibrated.

by ergott
The claimed accuracy of the Park is way more dubious and that assumes a proper "zero" base reading. Sure the Park is repeatable to within 10%, the problem is 10% of what? If the reading is 25% off actual tension (measuring against hanging a known weight off the spoke) but repeatable to within 10% it's still useless. I'd like to see followup information beyond that quote that shows just how well those scales in airports are maintained and calibrated. It's very easy to calibrate the typical scale used in these jigs, just hang a known weight off the spoke and compare readings (or even pitch) when using scale. Ideally, a mass of 100-120kg should be used since that's the operating range more inportant to wheel building.

by ericoschmitt
I have cheap chinese scale that is accurate within 0.1g and consistently repeats results. I weight parts with it and things like KCNC cb1 brakes were bang on 165.0g and also KCNC ti pro lite seat post, Extralite steerer expander, EDCO cassette and so on. All those on the claimed weight.

So I think I can trust a decent scale to calibrate an accurate (chinese) tool that repeats results consistently too... Only my current hang scale goes up to 50kg and I need at least 120, so I'll have to buy a new one. Or buy 10kg weights and hang those.