spdntrxi wrote:you would be surprised how sometimes no glue actually holds..

I am very surprised actually, and thankful. This was the first time ever I’ve ridden tubulars that weren’t glued...who would do such a stupid thing

Anyway, the “bulge” was just to the side of the valve. I guess during braking the tire would try to slide along the rim bed and get stopped at the valve but eventually started pushing up there as it had nowhere else to go. 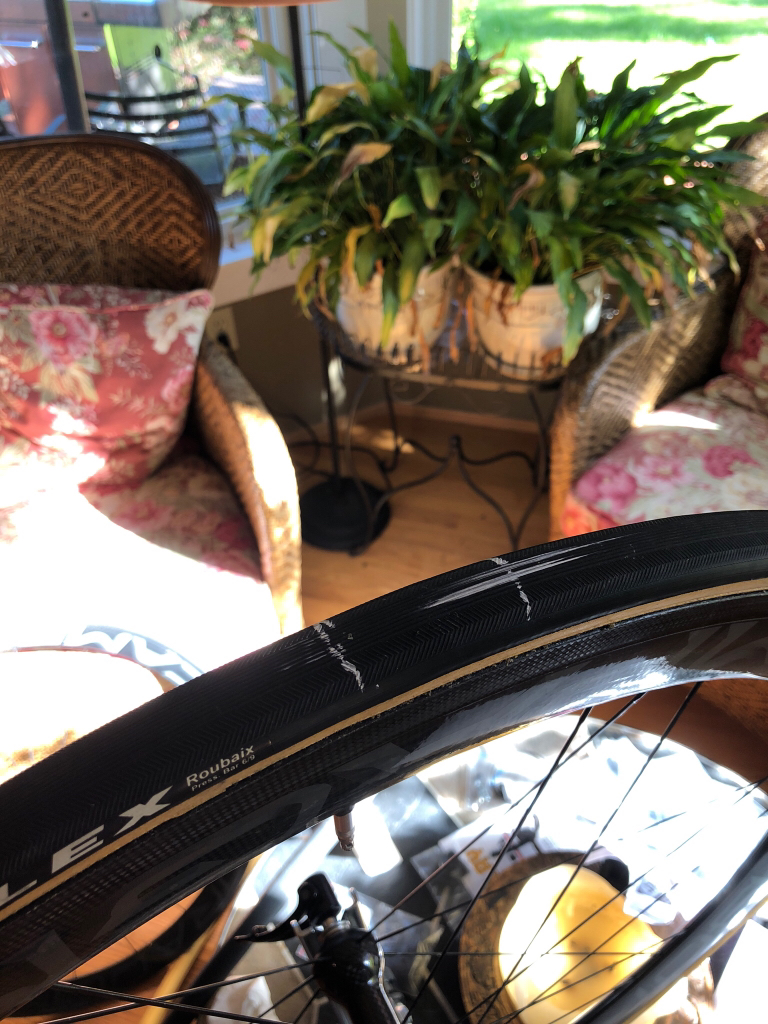 Addict, you must have the best ratio for #posts/#flats!
what's your secret?

i tried Pitstop as well...and had similar issues. was messy and didn't seem to stop the puncture.

unless they changed the formula, i haven't had good luck with it...and went through 2 cans on different ocassions.


1415chris wrote: ↑
Mon May 21, 2018 7:53 am
All of that after just one ride?
Assuming that you manage to seal the inner tube, some of the cuts you can close with super glue.
Rubber damage from first pic will leave a weak point anyway. Then the L shape cut. It will be very hard to glue it. Even if you manage to do that, it will not withstand the pressure and ride itself. The cut is just too big and the caracas may also be compromised.
In the best case you will end up with the bulge in this place.
You can give it a go, but imo it will be a waste of your time.
And advice on the sealant, I ditched Pitstop after my first two attempts. It wasn't messy, but simply it didn't work.
I had a good experience with No tubes and Orange.


As for pitstop.. it sucks period. I had that for about almost a year and with this first flat, it started to go in good for a while and then after that it exploded all over my bike.

Today I test it on the trainer for about 15 mins.. now there’s a bulge/ bump lifting up where the puncture was at... probably not sealed?

with a small cut there's no bulge, once it gets to maybe 2mm it becomes noticeable, the cut in the rubber could be far bigger, but the rubber isn't structural

small cuts in the carcass can occur without a puncture, but over time the latex tube will get abraded and an old cut will become an actual puncture

if it's not too big a cut, tufo will still seal it, a 'plug' of sealant forms, you may see a slight bulge due to the carcass cut but it'll be ok, after a couple of months when the sealant inside has dried up the plug may fail, at which point put in more sealant and the process repeats

if the cut is large enough. the plug may form but soon fail as the pressure forces it through the cut

with veloflex i find a carcass cut up to around 3mm is reliably sealed, beyond that it gets less reliable, i've had a big cut seal ok but then fail when hitting a ramp to go up onto a driveway (i.e. sharp pressure increase)
Top

thanks sungod.. the cut is almost 3mm long. took it out for a short 4 miles morning sprint.. ran over some manholes and uneven roads and seems to be ok. the parks tool GP2 patch that was superglued on is still there.. roughed up but bulge is less visible and by touch. pumped it to 120psi before the ride to test. will put more miles in this weekend and see. will bring my preglued veloflex carbon 23mm with me in case this sprinter blows.

should i need to replace on the side of the road (tufo extreme just dispatched from chainreaction), can i just pull off old and mount the preglue on without carrying additional mastik? meaning with that mount.. would it be safe to go downhill if needed?
Top

addictR1 wrote:should i need to replace on the side of the road (tufo extreme just dispatched from chainreaction), can i just pull off old and mount the preglue on without carrying additional mastik? meaning with that mount.. would it be safe to go downhill if needed?

As long as it’s preglued you’re fine, but use common sense of course. Don’t rail and carve into a high speed turn if you know your tire isn’t properly glued. On the other hand, it’s surprising how well a preglued dried tire does actually stick to old dried glue on a rim bed. It’s “contact” cement, and activates pretty well under pressure. I heard of someone in this thread that just went out on some tires that weren’t even glued. Thought they were, until they started sliding a bit creating a bunch up which presented itself in the form of a hop. Don’t do that. It’s dumb.
Colnago C64 - The Naked Build; Colnago C60 - PR99; Trek Koppenberg - Where Emonda and Domane Meet;
Unlinked Builds (searchable): Colnago C59 - 5 Years Later; Trek Emonda SL Campagnolo SR; Special Colnago EPQ
Top

I always carry a little 2oz bottle of bontrager sealant. Had to use it recently. Small hole, removed valve core, half bottle, sealed right up. Still holding fine and it's been about a month or so. In the last 3 years i have had 3 other punctures, all 3 were beyond repar. 2 large cuts and a sidewall cut. Glass bottle, house key melted in the tarmac with the pointy end up, and a pot hole the group decided not to call out.
Top

sorry for being cryptic.
You wrote "first flat today" - you never had one before? quite a feat
Top

basilic... haha i see what you mean. but it was my first flat with tubular... before i was on clinchers.

Maybe i've been lucky with pitstop, the few times i've needed to use it, it's worked.
Its a "get me home", not a prevention method, or fix, and dont expect to put 100psi on top of it.
Official cafe stop tester
Top

I was thinking the pitstop would get me home cus I was about 15 miles away.

At first it went well and tire started to plump up a bit and I can see the pitstop coming out of the puncture. But then after that i started hearing hissing sound from the valve and the rubber cone on top of the pitstop exploded... pitstop foam everywhere... and I knew I was screwed. Ended up calling my personal SAG (wifey).