usually i would bring a spare, but today's morning ride i forgot it... 36 miles in and i noticed the rear wheel making some weird noise. to my surprise..it's covered with cuts and glass. after removing the glass, i tried to fill it up with pitstop.. first time using that and turned out to be a mess. most got into the tub.. but other were all over.

is my veloflex sprinter done for? i counted a total of 7 cuts and punctures.

All of that after just one ride?
Assuming that you manage to seal the inner tube, some of the cuts you can close with super glue.
Rubber damage from first pic will leave a weak point anyway. Then the L shape cut. It will be very hard to glue it. Even if you manage to do that, it will not withstand the pressure and ride itself. The cut is just too big and the caracas may also be compromised.
In the best case you will end up with the bulge in this place.
You can give it a go, but imo it will be a waste of your time.
And advice on the sealant, I ditched Pitstop after my first two attempts. It wasn't messy, but simply it didn't work.
I had a good experience with No tubes and Orange.
Cervelo S5
Cervelo R5 VWD 5637g/12.43lb
Pronghorn XC SW Race 8284g/18.26lb

pitstop is worse than useless, tufo extreme is the best i've found, works very well with veloflex, some say orange seal is as good/better

i've had veloflex tubs with way more cuts than that, as long as the tyre isn't bulging at a cut it's fine

now that the tub has sealant in it, you need to avoid letting it deflate, if that happens the sealant can stick the inner tube to itself, then it'll fail when re-inflated

you can try putting some better sealant in and see if it holds, as long as there aren't bulges you can keep resealing if an old/new puncture opens up, sealants dry out over time, but if it's really worn it'll hole more easily and there comes a point where you could spend more on new sealant than the tyre is worth

with just a single puncture in a new/newish tub, i prefer to repair, but once it's worn i put sealant in as the return on time/effort is not so good if it's already worn,
Top

Ok need to get me some new sealant and see if it will seal it up. I just tried to pump it up and it still leaks.

I've actually had good experience with PitStop. It can't fix large punctures, but used correctly (hold the can on the valve for a full minute), I think it serves its purpose.
“If you save your breath I feel a man like you can manage it. And if you don't manage it, you'll die. Only slowly, very slowly, old friend.”
Top

got some orange seal today and filled about 2-3oz of it. spun it around for a while before pumping up. it squirted and wouldn't seal.
then saw on youtube ppl use crazy glue + patch. so i did that and so far it's holding at 125psi.... hopefully it will keep it sealed...

I think the superglue trick is meant to seal a tubeless tire. How can superglue seal a tubular tire as the leak is on the tube and not the tire itself?

your picture shows 'endurance' orange seal, it's different - i made the same mistake once, only found out later i'd got the wrong type

i think it is designed to stay liquid longer in tubeless applications before needing refill, but it does not seal as well when used to try and fix inner tubes

putting a patch on the outside may help by giving the sealant extra time/support while it dries in the hole, how it lasts out on the road will be the test, especially when hitting bumps
Top

doh.. so from the sound of it.. looks like i got the wrong type of orange seal. so maybe this tubular is fubar?

ordered some tufo extreme from chain reaction. any point in putting those in or just save it for next time i have a flat on a different veloflex?

My lbs recommended the endurance version because it states it’s for tubular, whereas the original orange seal doesn’t. 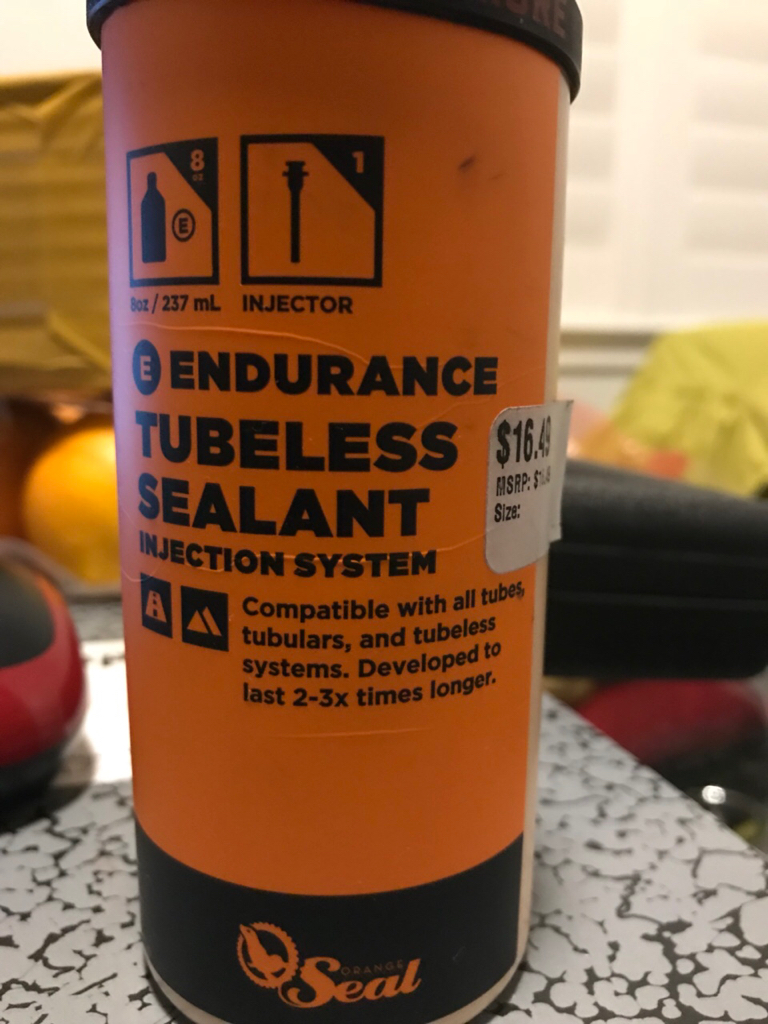 for the tub with the orange seal in it, i'd just see how it goes, eventually the sealant will dry out, then should be ok to put tufo in it if it flats again - about one third of a bottle is enough

with tufo, it seals anything that can be sealed - including it's own nozzle, presta valves, valve stems - i carry a bit of plastic coated wire to unclog the nozzle
Top

In my experience, the best way to repair tubulars is to simply replace the tube. There are services that will do that for you. My personal recommendation would be to avoid sealants and the like for tubulars (althought I have been itching to try a can of Pitstop that I have been lugging-around for a long time now, just because). The 'enclosed' nature of the tubular 'environment' makes the use of such sealants less effective than in tubeless applications and causes a real mess for re-tubing later.
Top

@geoff: I’d chuck that canister of pittstop before you actually embarrass yourself trying to use it for the first time on the side of the road. Will spray foam everywhere and you may be lucky enough to get some in the tire but I doubt if you’ll be lucky enough to have enough pressure left in that canister to get it inflated. Best bet is liquid sealant, use at time of puncture (I don’t do the pre-emptive filling of a tube).
But speaking of embarrassing moments... yesterday I was bombing down a long very smooth relatively straight descent and noticed what seemed like a hop in my wheel but thought it was just uneven pavement. I eventually stopped to check and sure enough there was a hop in the tire, not the rim. Hmmm... that’s never happened before as I’m always really meticulous about my glue jobs. Eventually got home and left it for another day, this morning to be precise. Well, turns out that particular wheelset was not glued at all, I had just mounted some Veloflex on them as placeholders. So, I’ve had several rides now on those tires/wheels down some pretty fast curvy stretches that could have been disastrous had the tube came off. But it never did. Both front and rear, completely unglued, and here I am riding around on them up hill, downhill curves etc. There was some very light glue remaining on the rims from a previous four job but that’s it. Nothing on the tire at all and they both just peeled off easily once deflated. Now that I think back there were a couple of times recently that I recall the rear feeling a bit different, maybe a slight wobble, but never thought anything more of it till just now. And now that I think back some more, there was a set of wheels that I’d been meaning to glue but never got around to it. That’s because I mounted them in some rims and just put them on a bike to keep them out of the way for the time being. Ouch! And I’m really trying to stay injury free this year.
Colnago C64 - The Naked Build; Colnago C60 - PR99; Trek Koppenberg - Where Emonda and Domane Meet;
Unlinked Builds (searchable): Colnago C59 - 5 Years Later; Trek Emonda SL Campagnolo SR; Special Colnago EPQ
Top

you would be surprised how sometimes no glue actually holds.. I assisted a guy who had a flat on my recent Eroica california ride. This was a pretty rough and gravel descent route and he had a flat with about 20 miles to go. I just happened to have a tubular and a roll of tufo tape. His rim was clean.. no glue and he admitted this was his first ride with tubulars.
2019 BMC TM01 Road UCI config 7.36kg
Top