So I've been juggling wheels almost as often as Ryan juggles bikes. Last weekend, it occurred to me that I should finally just commit to a custom build. Of all the wheels I've owned over the last ~2 years, I've consistenly come back to my Reynolds 46 but wanted something a little lighter.

I've kicked around the idea of FSE for the last year or so - and almost bought their stock builds a couple times. Ultimately, I figured the additional cost for a custom build on Carbon-Ti hubs would be worth the weight reduction and the support/service of a shop that I'm more familiar with.

One week ago today, I got my ass in gear and gave a call to Fairwheel Bikes. Tony talked to me about my weight, riding style, wants and needs, and we settled on a fairly standard 20/24 build on CX-Rays being sufficient. Honestly, this interaction with Tony was so positive that the wheels could have showed up made of rubber and I'd still have been happy with the service. Fortunately, that wasn't the case - but I can't overstate how much I appreciate such courteous and prompt service.

A whopping 5 days after placing my order, the wheels are at my door...

The finish of the rim is great - I'd say superior to Zipp, probably superior to Enve, and not quite as polished looking as new Dura Ace (which isn't really fair because they're painted). The stealth logos are killer. The brake track has a very subtle appearance - and almost matches the rest of the rim - but it does feel slightly more abrasive than rubbing your finger over the rest of the rim. (I'll add in pictures here later)

I was also pleased to see the tire bed is a similar profile to my Reynolds - which hold a 25 or 27mm tire well and are super easy to glue up.

I was part exhausted and partly in a rush to get these glued up and ride them - so I didn't take many detail photos over the weekend - but here they are mounted up with Arenbergs. 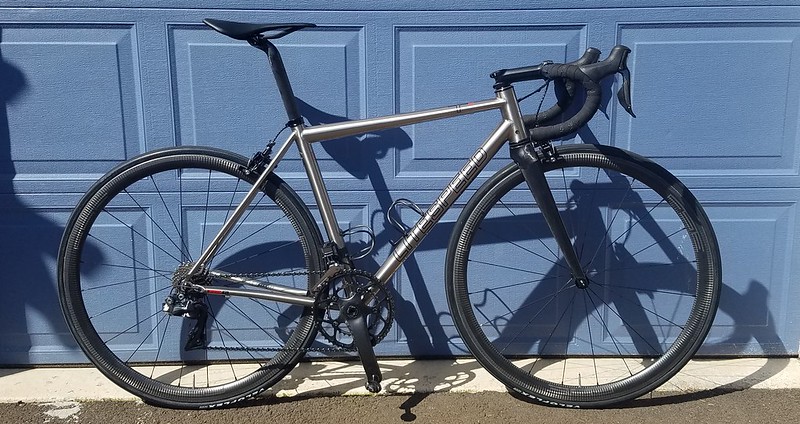 First ride was a coffee cruise with the wife so no real efforts to gauge their stiffness. As you'd expect of a <1100g wheelset, they don't take much effort to spin up. I decided to start out with Campy red pads since I've got a set around and haven't paired them up with anything yet that didn't work out well. The one thing I've noticed with these pads, however, is that they can take ~100 miles to feel like they've bed in and have a good bite. Yeah, that wasn't the case here. At all. The road in front of my house is a 14% grade so it doesn't take me long after rolling out of the driveway to have a chance to experiment. The first time I squeezed the brakes I thought I was going to brake check my wife. It's early to make definitive conclusions about anything really, but my impression from a 1 hr ride is that the stopping power of these wheels is at least equal to any wheel I've ridden in the last 2 years - regardless of rim material.

Amazing review! I just bought a set of 2.2 wheels laced to Carbon Ti hubs from my buddy, who got a FSE/Extralite wheelset from FWB.
He swears by those wheels as well... I want a sub kilo wheelset, and it looks like the FSE/Extralite combo is the way to go.
Speedvagen Road Machine "2011 Surprise me | Rob English "Mudfoot" 29er | Focus Izalco Max
Top

FSE wheels are so underrated. I had super low expectation when I purchased mine, and it has been my go to wheelset everytime I'm on the bike. So far, I've put over 1500 miles on my wheelset, and it's still true since day 1.

BTW, I used FSE brake pads instead of the Campy one, and I felt like the stock pads brake a bit better than my red Campy.
Top

Frankly you can expect any descent wheelset to be true after 1500 miles.
Unless you are trying to say that from such a bad wheels getting 1500 miles withouth truing them is a great score

I've had a couple of wheelsets built by Fairwheel Bikes, great service and build quality. This may not be the case for you, but it has been for me; the CarbonTi pre-load on the rear hub needed to be adjusted (tightened) because there was play in the hub out the box.. I did tighten it (by hand, which is recommended) and that eliminated the play. Unfortunately, I needed to repeat this after every ride because the play would return. Fairwheel Bikes suggested blue loctite on the pre-load nut. Have not tried this yet but seems to me this should have been mentioned in the manual.

BTW, this is not my first post, I was locked out of my previous account (Razor).
Top

1415chris wrote: ↑
Mon Apr 23, 2018 8:30 pm
Frankly you can expect any descent wheelset to be true after 1500 miles.
Unless you are trying to say that from such a bad wheels getting 1500 miles withouth truing them is a great score

Not for a wheelset that only cost me $900 bucks

so bet you I was surprised.
Top

I've seen a couple sets of Zipp wheels go out of true under a 135 lb rider...

As for the hubs, I did not notice any play out of the box.
Top

As for the hubs, I did not notice any play out of the box.
[/quote]

I only noticed it after clamping the rear skewer down, then moving the wheel back and forth. I know any wheel will move doing this, but I could clearly feel the movement (a "notching"-like feel). I thought about getting the FSE pre-built wheels but decided to go custom.
Top

Just wondering if you're sick of these yet. Because Ryan's (my?) T1SL needs new shoes.

Does FSE still stand for Filament Spin Evolution? And were their claims about filament wound carbon verified?
Top

Has anyone had these in a 55mm depth? Throwing up options for a new set of tubs.

Sent from my SM-G975F using Tapatalk