shannonlinnan wrote: ↑
Mon Aug 05, 2019 10:22 am
It's hard to say... The wheels have been bulletproof and they seemed to hold pressure, so had it not been for the fact that I was not fond of the gp5000tl's I may not have noticed the cracks, or worse may have been the victim of a catastrophic failure had I not picked up on the damage.

My new Vittorias arrived and when installing them I noticed the cracks.

The front wheel is still perfect, they hold pressure well (I've always run tubeless setup) and I'm disappointed to have to give them up as I love the look.

Of anyone has one I'd love to hear from you!

I feel with you - I love my Venn Rev 507 too, knock on wood, so far no issues. I clocked around 4000 km with Continental Race Light Tubes and Vittoria Corsas 23c, they inflating to 26 mm - rear 6.5 Bar, front 6.2 Bar - I'm around 64 kg.
The reason I like the look of the Rev is that the pattern is a result of the build process. In other words, no additional labour necessary to create a stunning look, that is the essence of a perfect design imho. So sad that Venn will not continue to produce the Rev line up.
Top

Currently the Var 45 TCC and TCD are the same rim. Soon we will have a disc specific 45mm rim too so its weight will be lower.


Any update on a disc specific 45mm rim? Looking to get a set soon but the lower weight would be great.
Factor O2 Disc
Top

The current weight of a 45mm disc brake rim is 450g. This is less than the rim brake rim, but we are working on making the rim brake version lighter too.
Venn Cycling
Velocite Bikes
Cycle Taiwan

The profile is identical to the Venn Rev 507 rims except that internally the nipple reinforcement area is curved allowing better spoke orientation and less stress on the rim and the nipple. Wheel builders that performed the test builds all report close to perfect tool access (we offset the holes on the rim bed), spoke tensions and roundness of an assembled wheel within 0.1mm.

We'll be able to offer them for sale within the next couple of weeks.

I was gently reminded yesterday that I should post an update here about the new rims in our range. 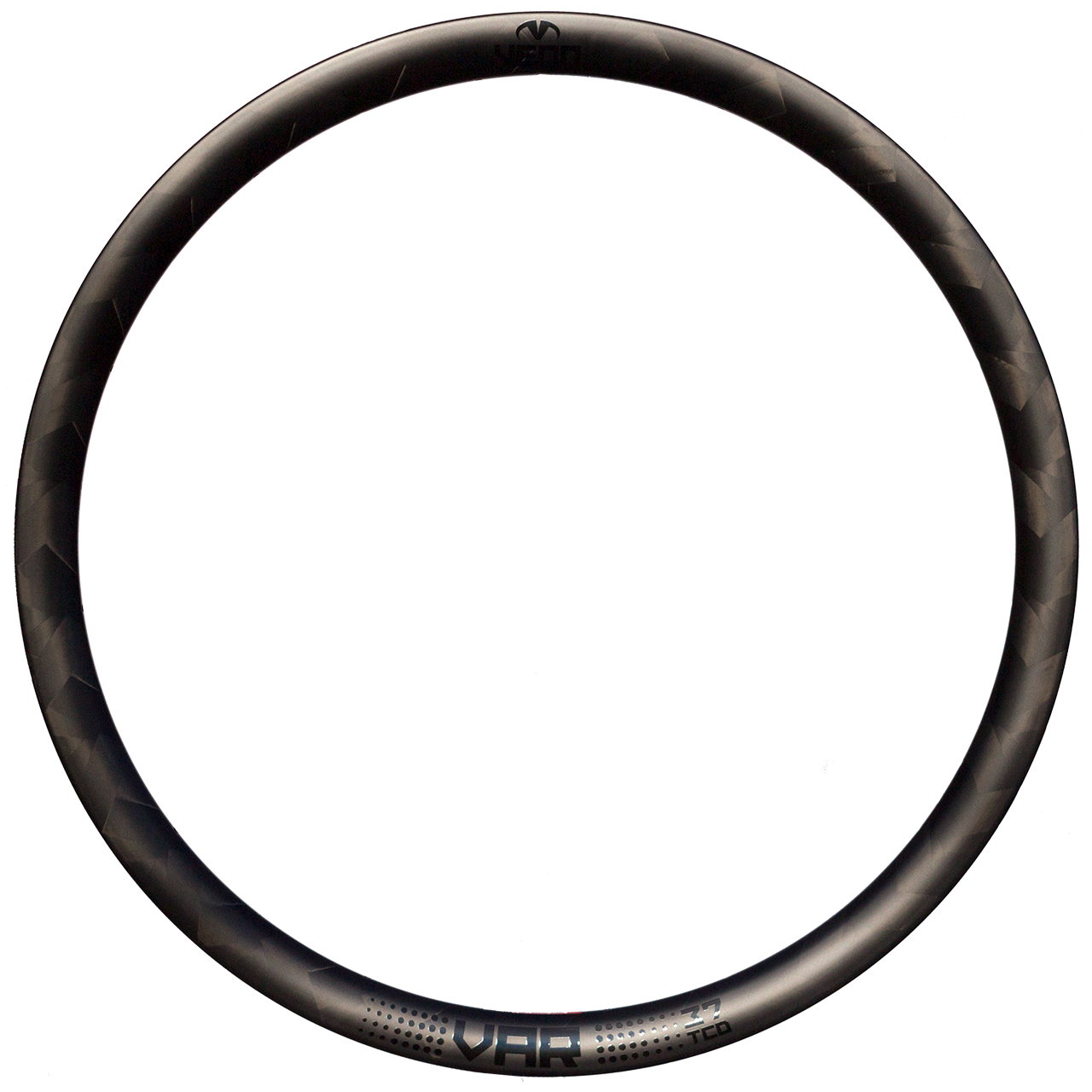 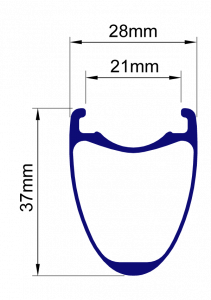 The rims are made using a two head winding process that you would have seen elsewhere, but we focus on precision (I see some examples online where the overlaps seem random, or terminate wherever) so I expect that our performance will be superior due to more uniform stiffness around the entire circumference.

They are not super light (yet) at 450g, but they have very good aerodynamics. I applied the learnings from the Venn Var 507 rim series (limited shipments started in late January) so the Venn Var 37 TCD shape is very similar - some would call it "V" shaped, but it is not. It is from the same family of extended laminar flow airfoils as the Venn Var 507 rims. 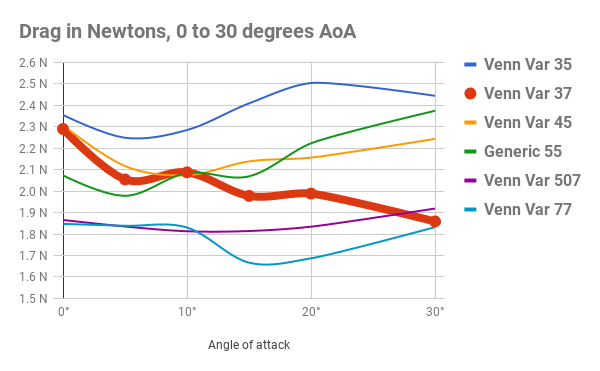 I'm about to order a high-end disc wheel build from a builder who uses your rims, when do you think the light ones will arrive?
https://www.instagram.com/hereticbikes/
Top

Not soon. It normally takes us a few months before we start optimising for weight and even then given the dimensions of the rim (large surface area) the target will be around 430-440g, so not a lot of difference. We stopped optimising the Var 35 TCD at 420g as it is already the lightest rim of such dimensions in the market and we hit the limits of what the materials can achieve at our performance targets.

I too will be interested in at least one set of these rims
Want to build the best pair I can between 35 and 50mm ,
so if it's 35mm deep it has to be quite aero for his deepness or if it's 50mm quite light for it"s deepeness

I was really a fan of the first 35TCD while they lasted, super smooth rims.

To be honest they aren't much interesting only rims offers on papers for nice aero with 25mm nominal width tires .
The schmolke, bike beat , munich composit are too narrow in internal ( 17,7 mm ) and external ( 26,5 mm ) for me at least
So I'll pass on them
Top

Light Bicycle has disc brake 46mm rims (28mm outer, 21mm inner) with 435g. I have their 56mm rims with 32mm outer and 23mm inner width, they were spot on 460g. They also started to produce flyweight version of their rims, for example 50mm rim with 32/25 is 410g. So 450g for 37/28/21 is not really light. I was hoping filament winding can make lighter rims due to precise machining and no excess material, but unfortunatelly that has not happened yet:(
Top

Well, filament winding can achieve low weights. We have different performance targets: uniform stiffness around the circumference due to uniform layup and laminate thickness, high pull spoke through strength - in excess of 500 kfg, and we do not stipulate rider weight limits, or tire inflation limits - just pay attention to the maximum pressures on the tire sidewall.

I am familiar with Light Bicycle, their products and their process and I commend them for their rim design prowess and amazing molding quality (the raw finish they achieve right out of the mold is frankly spectacular) but we are not competing with them.
Venn Cycling
Velocite Bikes
Cycle Taiwan

) and work with a few selected wheelbuilders all over the world directly, you can order from them directly in europe ( more expensive, tax, import customs ,vat ) or directly from their tawain office , it used to be possible anyway

Light Bicycle don't do OEM , but they have usa guys that have developed a usa branch
They have nice shipping system with prepaid tax delivery
They sell to customers, wheelbuilders , everyone
They have rims for roads, gravel, mtb , fatbike whatever
Their latest rims optimized for 25mm tires : the 36 and 46 are a bit long in the tooth now,
And I wouldn't ride the super wide ones with 25mm , except maybe the AR56

It seems they don't do aero testing or developpment , I only know that the AR56 is freaking fast from experience and hambini testing ( nearly the same as zipp404 )
Velocite do aero testing developpement , and it's true the filament winding allow the ride to be quite confortable compared to traditiional rims
Top

vmajor wrote: ↑
Thu Feb 06, 2020 8:51 am
Well, filament winding can achieve low weights. We have different performance targets: uniform stiffness around the circumference due to uniform layup and laminate thickness, high pull spoke through strength - in excess of 500 kfg, and we do not stipulate rider weight limits, or tire inflation limits - just pay attention to the maximum pressures on the tire sidewall.

I am familiar with Light Bicycle, their products and their process and I commend them for their rim design prowess and amazing molding quality (the raw finish they achieve right out of the mold is frankly spectacular) but we are not competing with them.

When do you expect the 507 VAR to be available? And what kind of weight for the wheelset? Heavier than the REV series? Thanks!
Top

We started some shipments of the Venn Var 507 and the feedback has been great. It took a while to start getting decent volumes of this rim since the factory had to learn an entirely new method of making rims in order to mass produce them. This however gave us time to optimize weight, so even though it is not officially out, the weight for both the rim brake and disc brake rim (same rim at this stage) is just 480g, stable.

The outbreak of corona virus is disrupting the schedule but I am hoping to have the first mass production run completed by the end of this month.

Raoul Luescher finally got around to cutting up my Rev 35 TCD and came away impressed by its manufacturing quality. Now I’m wishing I had been able to get it warrantied back in 2016 (not Venn’s fault, but the wheelbuilder I went through.) Hah.