I didn't put a thread up about this when I first got it because it was only ever intended to be an interim frameset. However, the bike that is filling in for has been out of action for longer than anticipated, so this has seen more and more use - and, in that time, has grown on me more and more...

I had long been intrigued about these, but they were always really expensive, rarely on sale, and the earlier ones would only take 23c tyres. Whilst searching for a decent-but-cheap interim frame I found a good deal on a Look 765 frameset locally, only to then find the same place was shifting some of these at an even better price. Knowing that the later ones had better tyre clearance, I took the gamble.

Initially built with 12v Record, I spent a while getting it sorted, switching between wheels, tyres and bar tapes whilst I tried to sort a setup and look that worked for me. Eventually I settled on the stealthier look, which coincided with changing the tyres to 28c - suddenly the bike felt totally dialled and came to life; and I've been enjoying it more and more ever since. In fact I've been enjoying it so much that it is now wearing a full 12v Super Record groupset taken off of my previous favourite bike.

The rest of the build is fairly straightforward at the moment - mainly because I prefer keeping the groupset complete and also because the supplied Time seat post is quite nice, which just leaves me to put a nice stem and bar on it. I'll probably go with an Extralite Hyperstem in stealth finish eventually, but the current Covid-19 situation is making those hard to get hold of so I'm currently using a 3T stem as a place-holder.

My Time post unfortunately cracked, but is thankfully being replaced under warranty, hence the WR Compositi inline post that's on the current setup: 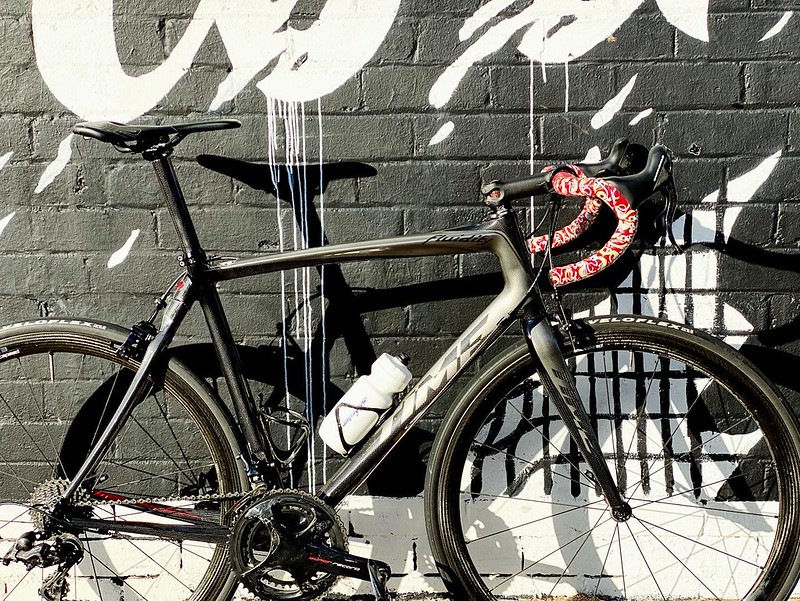 Build is as follows:

Weight with this setup is 7.1kg - which I'm pretty happy with given that lighter brakes, stem, cranks and wheels would easily drop that down.

If I keep it, I'd like to refinish it with a simple raw carbon, gloss clear and single colour Time logos as I don't like the design Time have used on it, but that's low priority. 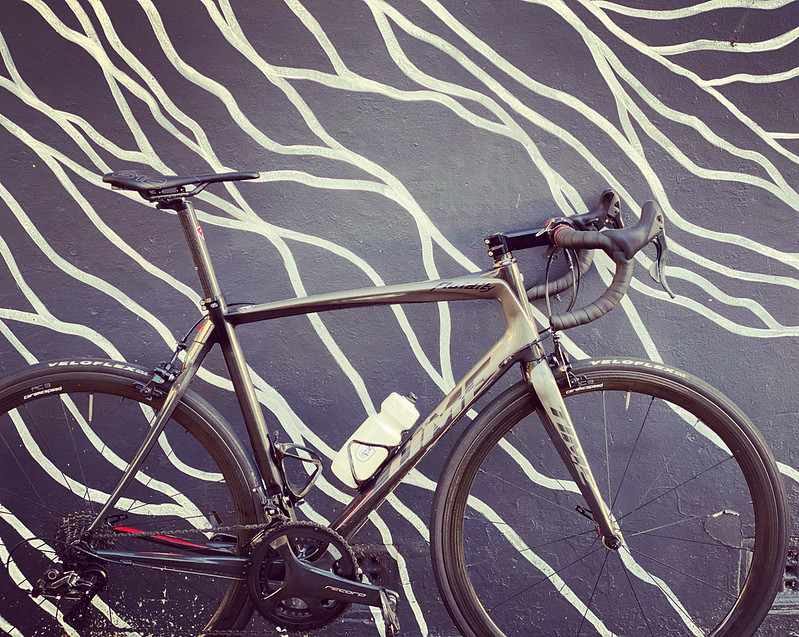 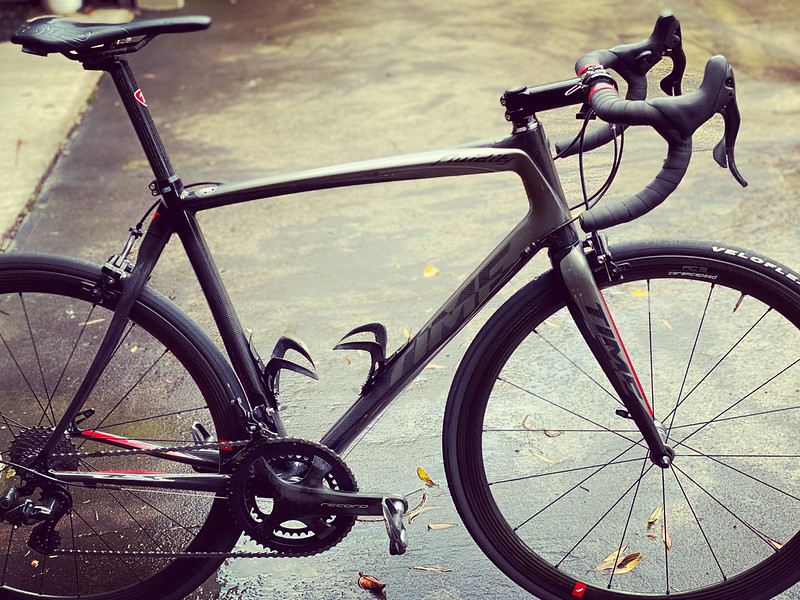 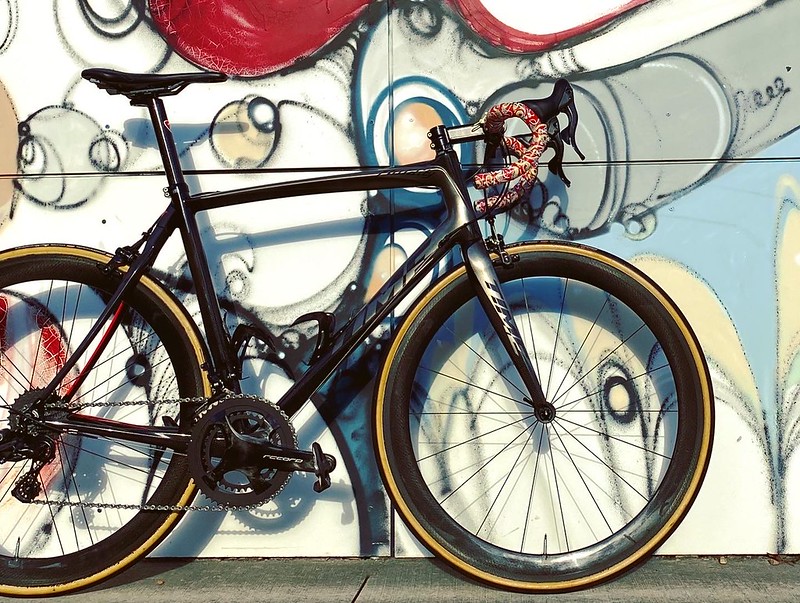 How do you find the shifting on this bike? I looked at these a while ago and saw they have really short chainstays (shorter than campag recommend iirc), so wonder if you get any chain rubbing or problems in large ring and larger sprockets?
Top

No issues at all here.

Why would Campag recommend a chain stay length? Yes it's short (404mm) and for disc I could perhaps understand as there's chain line issues with the wider rear axle; but on a rim brake bike that's not a problem.
Instagrammary
Current weapon of choice
My bikes over the years...
Top

Wow looks GREAT! Especially against those backdrops. Not sure if intentional, but you even matched the bar tape to the background.
2013 Cannondale Synapse 5 | 2014 Pinarello Dogma 65.1 | 2015 LaPierre Pulsium | 2016 Bianchi Oltre XR4 |2016 Pinarello Dogma F8
Top

Very nice! Post a ride review whenever you think you are ready.
My 6284gr TIME Alpe d'Huez
My 10012gr COLNAGO Master X-light
Top

great bike! time bikes are "timeless" and quality is second to none.
Top

RichTheRoadie wrote: ↑
Mon May 04, 2020 8:27 am
Why would Campag recommend a chain stay length? Yes it's short (404mm) and for disc I could perhaps understand as there's chain line issues with the wider rear axle; but on a rim brake bike that's not a problem.

It's to do with chain angle. Shorter stays = worse angle. It's why a couple of my older race bikes can't use certain gear combinations. 12/13/14 sprockets cause the chain to rub on the inside of big ring when i'm in the small ring, if i inadvertently shift to far up the block in the big ring, it runs really quite nosily, especially with new kit. (think that's 8 speed)
We are talking ~390mm stays though. And no paint on the back of the seattube, even with 21mm tubs. (i don't ride them often!)
Top

Great looking bike. What do you think of the wheels? They've been on sale pretty cheap recently.. Considering a pair for my Dogma.

They're very decent wheels. Ask Strongin on 'the other forum' - he's also a big fan.
Instagrammary
Current weapon of choice
My bikes over the years...
Top

Time frame, mechanical SR12 and rim brakes.
Everything is awesome.

No. No. No...
Marco Pantani - Momenti Di Gloria
Top

Pedals do not maketh the bike. And they're a fit issue (I have a very wide foot, so need the stability of the wide Shimano platform), not performance, which absolutely takes priority.

At least it's not Shimano wheels on a Campag bike (or vice versa).
Instagrammary
Current weapon of choice
My bikes over the years...
Top

There's one of these Fluidity franesets cheap on Craigslist in Seattle - if I wasn't deep down the Dogma hole, I'd jump..

Went down that road myself too...luckily I woke up and sold them, and went back to Time pedals...
Top