Decided to try a disc bike and after months of scouring for cheap deals, i finally got the build completed.

Not really light but since 80% of my saddle time is indoors on Zwift, finishing the build is the priority 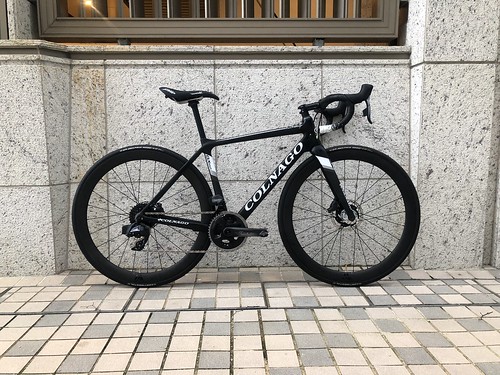 total build came in at 7.9kg

few things i will replace soon:
tape (less 30gr) - i planned to use Deda Perforated but it tore when the bike was being built. the mechanic just scratched his head and complained that it is made of poor quality
tube (less 200gr) - will go for Tubolitos since the tubes i use now weigh a whopping 140gr each. going for the Tubos will let me shave a lot
saddle (less 160gr) - still undecided if i will get a Lupina padded or Bjorn's saddle. weight savings would be almost the same
pedals (less 50gr) - i already got the aftermarket Ti spindle, bolts and plates so just need to find time to replace them
rotors (?) - current centerline 160 is at 134gr. will check more reviews on which lighter rotors and adapters i can get
spacer - i need around 15mm and only 3k is available. ordered a UD one and should come in this weekend
caps - silver ones i ordered will arrive tomorrow

If 80% of your time is spent indoors on Zwift then why the need to lower the weight of the bike plus why go for discs?
Top

If 80% of your time is spent indoors on Zwift then why anything...
Firefly Ti Road
Top

why are you indoors most of the time? you live in bad weather area?
Top

I will bring the bike to my trips back home (around once or twice a month) so I still went with a light-ish build
Discs because why not?

Kidding aside, on the 20% that I spend riding in the streets in HK, having discs gave me more confidence in braking considering how some people here drive - cut and hard stop right in front of you
Top

since streets are small and busy, most of the riding done in HK are during late nights or very early mornings
I can't wake up that early since I finish late at work so I just ride indoors

Went to visit my best friend who lives in HK, wish i'd taken my bike... If i go again i'll be sure to take it with me!

The scenery is absolutely insane, the rides look like they could be phenomenal.

The scenery is absolutely insane, the rides look like they could be phenomenal.

thank you.
there are bike paths and routes which are quite far from where I live but the scenery is indeed breathtaking
i am still trying to workout the best way to transport my bike across the other island so I can have more outdoor saddle time
Top
Post Reply
8 posts • Page 1 of 1