Thanks to a local club mate, this is now my daily driver: 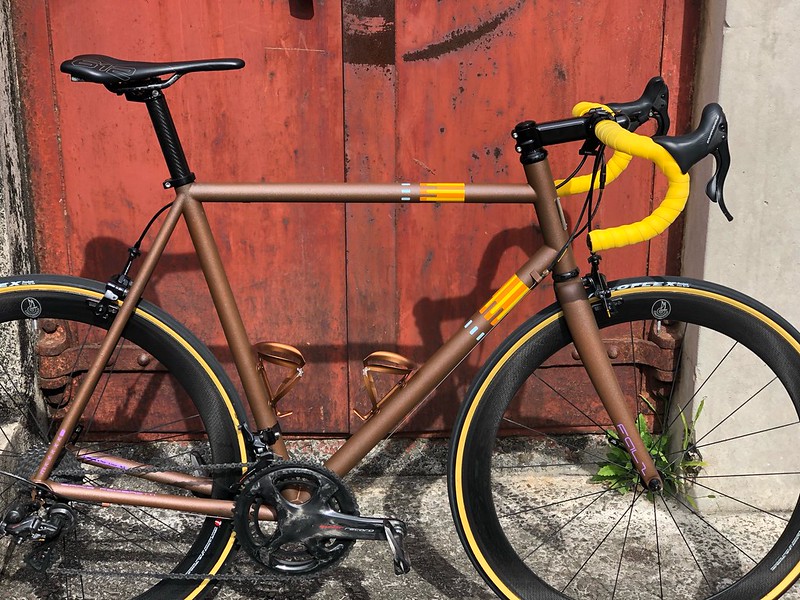 A third-hand 2013 MxxxxxO in Conn Rust wearing 12-speed Super Record and a set of older Bora 50s (CULT, but not Ultra). It hasn’t been a garage queen, but the Conn Rust paint hides marks very well; and the main thing is that it’s straight and there are no dents.

I had a Duende previously (circa 2011) and I wasn’t entirely keen. Back then I probably should have got the Ciavete Marcelo I really wanted to buy. Today, if I’m honest, a Duende would probably be perfectly good enough for me but, thankfully, this MxxxxxO isn’t anywhere near as harsh as I feared it might be, despite only having room for 25s.

This is intended to be as much of a ‘keeper’ as I have ever owned. We’ll see how that goes with my track record, but I don't have the time for constant bike swaps these days (or access to the discounts I’ve had previously). The only risk to that is that this is a 57 and I really should be on a 56. It works - just - but there’s a *very* slim chance I might bite the bullet and grab a Dario-era 56cm Duende or MxxxxxO from one of the few places that still have them at some stage (which may also mean v2 Falz fork and therefore room for 28s). I'll need a windfall first, though...

I specifically sought out older Boras to get ones with removable decals. The Campagnolo logo on them is the sticker that Campag use to seal their component boxes, which works really well. I want WTO Boras, but I can’t bring myself to spend that kind of money on notably heavier wheels; and I’d rather stick with tubulars for now - plus these are still up there with the best wheels I’ve ridden despite being ‘old tech’.

The PMP post is an excuse to finally use a component I have always wanted but never quite seemed right for any of my previous bikes. The Paul Comp Boxcar stem is a really nicely finished component that makes a nice change from most others; although it is bordering on being too bulky for the bike aesthetically.

Overall I think it is one of the best looking bikes I’ve had; and it’s definitely right up there in terms of enjoyment to ride too. I refuse to weight it, though - I don’t want the weight to put me off enjoying it as much as I do!

Hopefully I can stick to my guns and make this a keeper - unless that windfall does miraculously happen, that is...
Instagrammary
Current Weapon of Choice
My bikes over the years...
Top

That is truly gorgeous and a real keeper. I like the rebadged boras with the Campagnolo box stickers, esp with veloflex with gum sidewalls.
Top

I applaud you for not weighting it....it would be disrespectful.......I’ve always want a Pegoretti and although Dario is no longer around, the company are still producing the magic, so it’s still a bucket list item for me.
Top

Precious bike, I like a lot, the colour of the frameset is very nice. I think that Veloflex Roubaix are going to flow with the aesthetics of the bike
You don´t stop riding when you get old, you get old when you stop riding.
Top

I'm saying this from a place of love - you need different bar tape. Any color from Jonny Cash's wardrobe will do.

And then more pictures.
Top

This will only ever wear yellow or brown bar tape - black looks too sombre and dark on the Conn Rust scheme.
Instagrammary
Current Weapon of Choice
My bikes over the years...
Top

That's the problem, though - the frame doesn't stand out when everything is black. It needs the details to bring it to life.
Instagrammary
Current Weapon of Choice
My bikes over the years...
Top

Dark orange tape with black tyres and ideally a small orange highlight on the saddle?

Orange tape might work, but black tyres definitely don't. Trust me, this thing *needs* gumwalls...
Instagrammary
Current Weapon of Choice
My bikes over the years...
Top

Here’s how the original owner had it built up; and how I first threw it together For me, it’s just too dull like that.

Some tyres like these LCVs from Donnelly/Clement would work well, but they don’t make tubulars.

Added: Interestingly, here’s how Pegoretti presented the Conn Rust scheme at Interbike in 2013:

The last one works for me...

So, the same as my current setup but with a brown saddle?...
Instagrammary
Current Weapon of Choice
My bikes over the years...
Top

Honestly, it's perfect as it is, except for those bottle cages, black is usually, nay, almost always best.