C60 good review. Riding in exactly the same crap conditions here in UK I will stick with the dependable, cost effective set up whch has served me well for donkeys years. Many thanks.
Top

That seatpost clamp is a knock-off of a Ritchey 1-bolt post.

I use the Ritchey WCS carbon 1-bolt on two bikes and they are flawless... (there's a separate clamp you can purchase for oval carbon rails). It is the most comfortable post I've ever used and it's also extremely light @152 grams (of which 42 grams is the clamp). It's a 27.2mm 0-offset post.

Now I've ripped this bike to bits I can do an update as I never weighed this frame/fork combo in the first instance. It always felt very heavy in the front end, partly those meaty ergolevers and brake caliper/disc but to me there was something more going on to explain the 900g extra weight this bike had over my replacement rim brake bike. 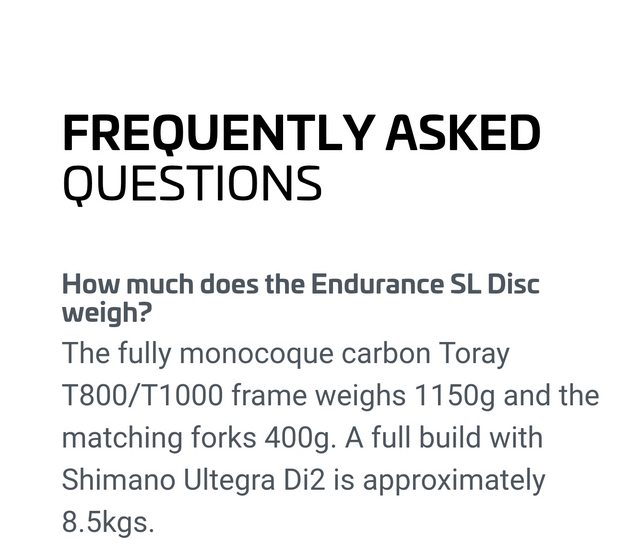 Most manufacturers (I'm thinking every one I've ever read about a frame weight) puts the weight down for the middle frame out of the range so in Ribble's case it is a medium which is exactly what my frame is. So they're claiming 1150g but the reality for a totally stripped down frame is: 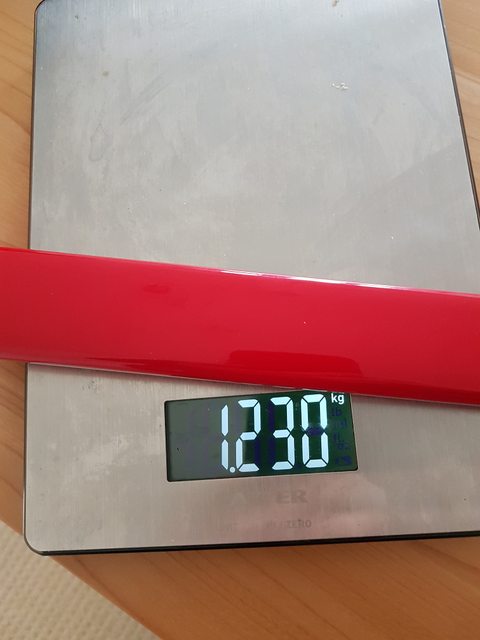 Now maybe they are the exception and put the weight on for an extra small frame. But there is nowhere to go with the forks as they are standard for every frame. They are claiming 400g yet mine come in at this weight. And these are totally slammed so there is no spare at all: 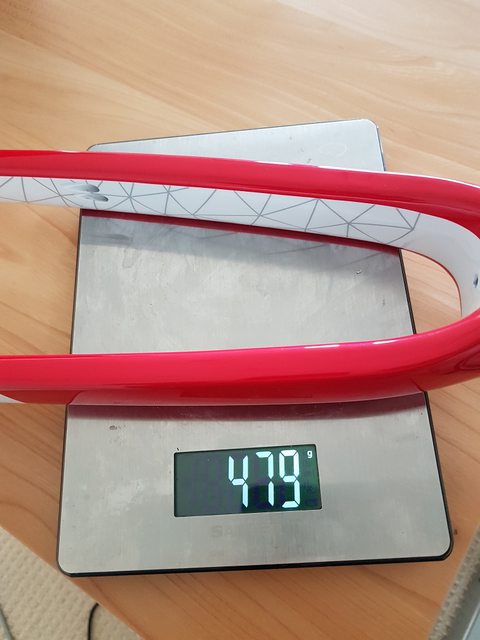 And if you add on the bit that was chopped off the top you get this amount extra: 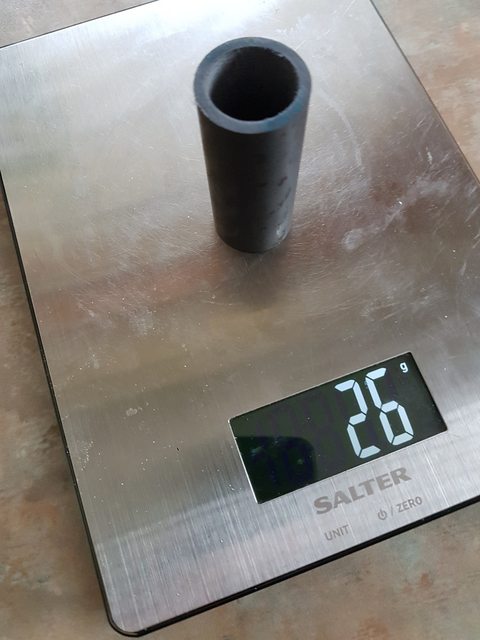 So that takes the forks to 505g

Ribble? Are you there? Would you like to explain this one? At least it's there for everyone to read now.

I've also got weights for the brake calipers, discs, ergolevers and cables so I'll do an exact comparison with that, dual pivot and direct mount brakes and see if I can establish fully where this disc brake bike gains 900g over the direct mount Cannondale I built up instead viewtopic.php?f=3&t=159994
Top

A lot of people I know are not happy with their disc bikes, for all the reasons cited here. I also hear the screeching, rubbing and howling and feel bad that people are unhappy with the results.

Just when I think I've heard all the kinds of noise disc brakes can generate, I heard a friends bike give out a howl the other day that was so profoundly loud and annoying everyone around him were almost begging him to stop braking. The resonance was enough to cause one's vision to blurr!
Top

The additional weight doesn't surprise me. Unless the brand specifies a size for the weight, they might use the smallest or even an unpainted weight. A lot of brands make no specific weight claims. Trek lists complete bike weights for prebuilt models and frame weights for midsize frames.

My own disc brake bike is 10kg. It was 9kg once with record 10 speed and trp spyres but that combination never worked properly. It gained mass when I switched to shimano rs685 kit and grx 1x drivetrain. Interestingly with campagnolo rim brake levers the rear pulls more cable than the front so the rear brake is more effective.

The whole reason why I dont have campag disc kit on this is it's a 2015 frame so post mount and QR.

These brakes work well. The rear has gone squeaky and I suspect contamination. Since I am less bothered by noises I can live with this and just use the front brake more.

The only thing I can say that is an advantage over rim brakes is lack of rim wear. I solve the rim wear issue to a large extent by having alot of bikes and the main commutor bike at present has pacenti sl23 v1 rims of which I have a ot of stock left (customer sent back cracked rims and when I re rimmed under warranty i changed the rims on both wheels to keep them matching if this was appropriate). Since I am now down to my last 20h spare front the disc brake bike will have to become the commutor at point over the next year or two.

My wife's disc brake bike build with r785 di2 is so crap its unusable. The calipers keep leaking. They have been replaced and the new ones leak. Its hardly been used over the last 5 years.

Given the price of hydraulic kit and my like of down tube shifters and single speeds perhaps that should be the disc brake bike I should get with the trp hylex system.

Given the range of stuff c60 rider has posted perhaps a modern disc brake bike is just not his cup of tea. It certainly does not add riding pleasure.

Since I bought the disc brake bike I have bought a further 8 bicycles all with rim brakes. I suppose I just dont like disc brakes bikes enough.

Is there a lightish disc brake single speed frame or one with down tube shifter mounts.
www.thecycleclinic.co.uk
Top

So now you have taken this bike apart c60 rider what are you going to do with it.
www.thecycleclinic.co.uk
Top

You're not really a 'die hard' rimbraker if you've converted to discs within ~5y of their existance, right? I've had relationships that I called 'temporary' that lasted longer.
Cervelo S3 - 7.35kg
Top

People aren't actually questioning the whole disc brakes on road bikes thing. There is nothing really 'wrong' with rim brakes (provided you are using compressionless housing that is).

It's all about mechanical advantage. Hydraulic brakes are at a disadvantage to begin with because the discs are only generally 140-225mm in diameter. Compare that with 700c rims which are basically 622mm in diameter.

The only real reason hydraulics are "stronger" is because the fluid+housing is generally more incompressible than traditional cable housing setup, which tends to stretch more. Disc brake pads move less and have more mechanical advantage. If they retracted more as some people have requested, they wouldn't be as powerful. There's no real 'magic' to it.

I actually think 140mm disc brakes (or even 160mm) are too wussy for some road bike applications. I used to ride and train in Tenerife for example, and I would often train on a hybrid bike with hydraulic disc brakes (180mm front, 160mm rear). I'd ride up 5% slope for an hour, and then bomb down the 20% shortcut roads.

And what I found was that I could easily smoke a 160mm rear disc brake. In fact I think that a properly set up rim brake has more power than the smaller sized discs. The limiting factor of rims brakes seems to be that the tyre heats up and you risk some sort of explosion. That's what worried me the most, not the lack of power of rim brakes.

I quickly came to embrace disc brakes on all sorts of MTBs, or even hybrids, but I wouldn't get a road bike with disc brakes. Forget it.

The truth of the matter is that the bicycle industry continually has to try to invent new shit to sell to people. That's all it is you know. Just look at MTBs and all the plethora of wheel sizes. How many wheel sizes do we have for road bikes? Pretty much just the one, 700c... 650c is all but obsolete now (even though it fits smaller riders better).

Look what happened to Chris King. They took a stance against integrated headsets.
https://forums.mtbr.com/general-discuss ... 26602.html
https://bmxmuseum.com/forums/viewtopic.php?pid=975273
I see they too eventually caved.

On a similar note, I like design, I love design, but what I don't like are fashion trends.

The plan is to sell the bits I'm not using which is pretty much as follows:

Frame and forks as you can see

Ergo levers with calipers and discs. They come with barely used Campagnolo pads and Swisstop RS pads. I'd also include the hydro cables I have but also the campagnolo oil level tool, jagwire hose cutter, jagwire needle driver, campagnolo bleeding kit and the remains of a 250ml bottle of mineral oil, which is more than 3/4 of it. I didn't know I was only going to use about 40ml

And then there's the Campagnolo Bora 35mm wheels, includes bags and all the build certificates

I think that's the lot. I think I'll be sticking them on ebay but if anyone is interested then by all means get in touch.
Top

Ypuh wrote: ↑
Mon Feb 17, 2020 3:15 pm
You're not really a 'die hard' rimbraker if you've converted to discs within ~5y of their existance, right? I've had relationships that I called 'temporary' that lasted longer.

Your experience echoes mine. Not sure if you saw my Wilier thread last year with Campy Disc Brakes. I didn't want to nut up for the tool but I'm now glad I didn't. It's amazing to me how none of the shops I contacted had the proper tools to face the mounts...in Los Angeles of all places...
Strava
Not for the sensitive types. My Instagram reviews
The Ex's: I've lost track...
Top

Great thread and insight. I find it endlessly frustrating that refusal to accept the issues you have had to deal with is somehow construed as lack of skill or engineering prowess which is just silly if we all had our real job titles on the thread. At least a Ti bike would allow a lot of these disc issues to at least be addressed more easily (I.e tolerances, 3D printing the flat mounts, etc). Whether companies step up and improve manufacturing standards is so hard to predict given the cost associated with that. Many people on here have proven that a disc frame can be done well so I'll stay cautiously optimistic.
Moots Vamoots RSL (2019)-Dura Ace 9100
Cervelo S1 (2010)-Super Record 12 (viewtopic.php?f=10&t=161577)
Kestrel RT700 (2008)-Dura Ace 9000
Mosaic GT-1 (2020)-GRX Di2
Top