Thanks Nozes, actually yes, I have already been following your project! Nice build and I love how you're continuing to improve / lose weight.

And i'm looking at the GUB 1158 saddle too. The Prime one I have on there now is only temporary because I had it lying around but the GUB looked like a solid 'budget' option. How have you found it?
Top

Great looking frame - especially after the (impressive) polishing you have done. This will be a really cool bike once completed

As low-price / low weight alternative to the Thompson stem you could consider the Uno7 stem, which is available around 25 Euro (do idea what that is in your currency, though). Debadged with acetone the matte black will match nicely (if not perfectly) with the Zipp bars and you will lose close to 50 grams in the process

And i'm looking at the GUB 1158 saddle too. The Prime one I have on there now is only temporary because I had it lying around but the GUB looked like a solid 'budget' option. How have you found it?

I haven't got much time on the Syrius chainring, but so far it's been great. TA is high quality, I've used their chainrings on my MTBs for years, and the shifting, durability and weight is great.

The GUB saddle is probably the best buy I made on Aliexpress. Of course it's personal, but I find it very confortable, and after about 5000km it doesn't show any signs of wear. Using round yokes and a wide seatpost craddle saves the carbon rails from pressure points that can cause damage.

Looking forward to see more of your build, and btw, get some stickers on that frame! Maybe not all that came stock, but at least the big ones on the downtube.
Top

Awesome frameset, very similar to my polished R500, it deserves definitely a lighter stem, a Kalloy Uno with removed logos would be a good option, and some Cannondale decals of course
My 4,93 kg Supersix Evo HM: viewtopic.php?f=10&t=137647&start=30

garjo wrote: ↑
Thu May 09, 2019 5:49 pm
Awesome frameset, very similar to my polished R500, it deserves definitely a lighter stem, a Kalloy Uno with removed logos would be a good option, and some Cannondale decals of course

Thanks Garjo, and yes i've been studying your build too. Very nice and as you say, quite similar to what i'll be doing. I'm impressed by the final weight you got with all Campy, I think when I did my own calculations I couldn't get Campy stuff to a < 6.8kg build easily. Nice work anyway!
Top

So i've had this crankset for a while now, it was the second purchase I made after the frame/stem/bars/seatpost combo from previous owner.

Had to go SRAM for the weight savings but I wasn't keen on all the red colouring and other graphics plus being previously used they had quite a few marks and scratches in the clear coat. So i've slowly been sanding down the cranks, back to the raw carbon. Works well since the frame & fork are just the raw material as well, so why not do everything else the same way.

Pretty pleased with the result so far. I think the crankset looks much cleaner/nicer now without all the branding. 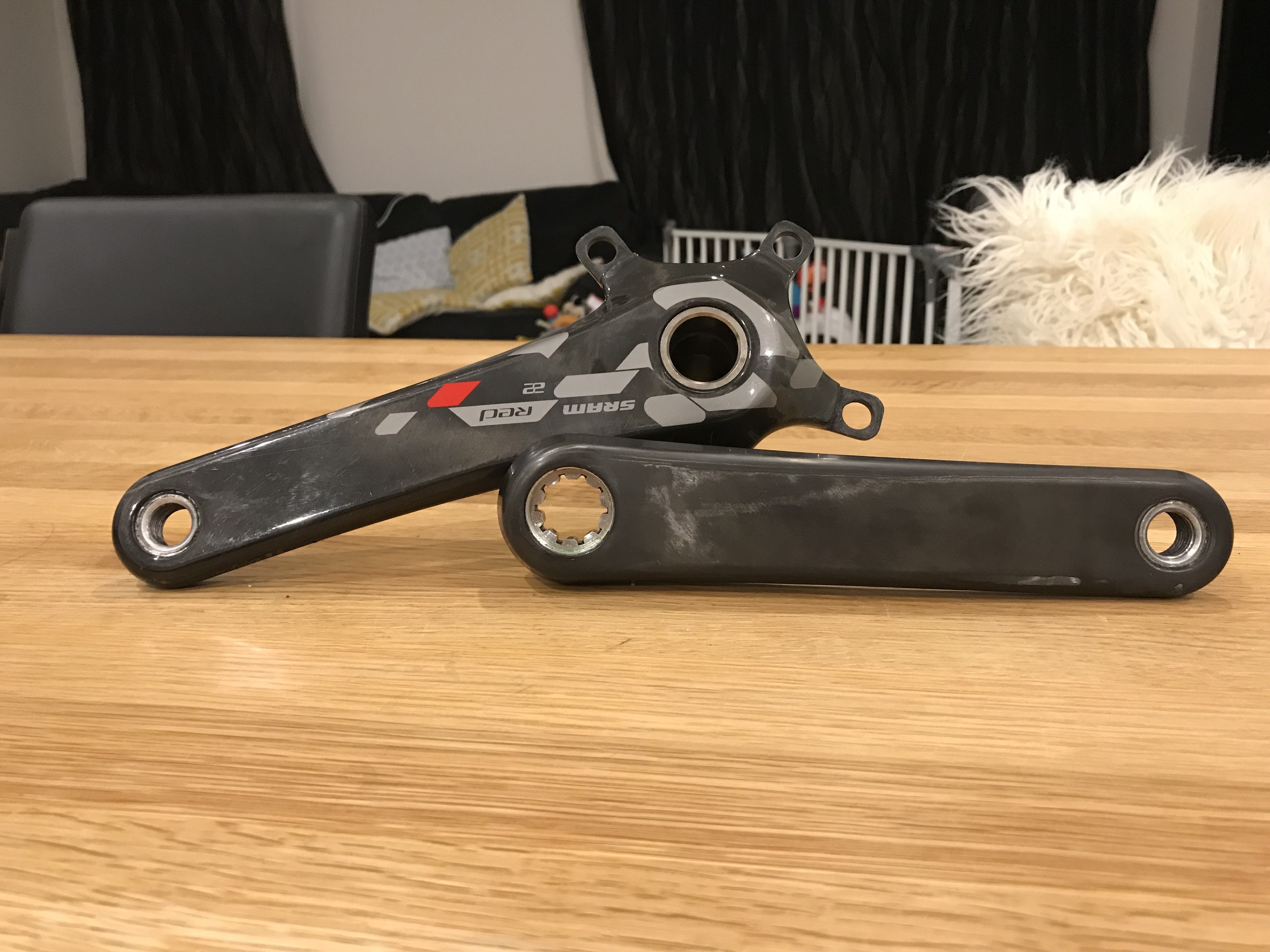 And here's the lh crank on it's own. The Carbon has quite a rough look but has an interesting 'sheen' under lights. 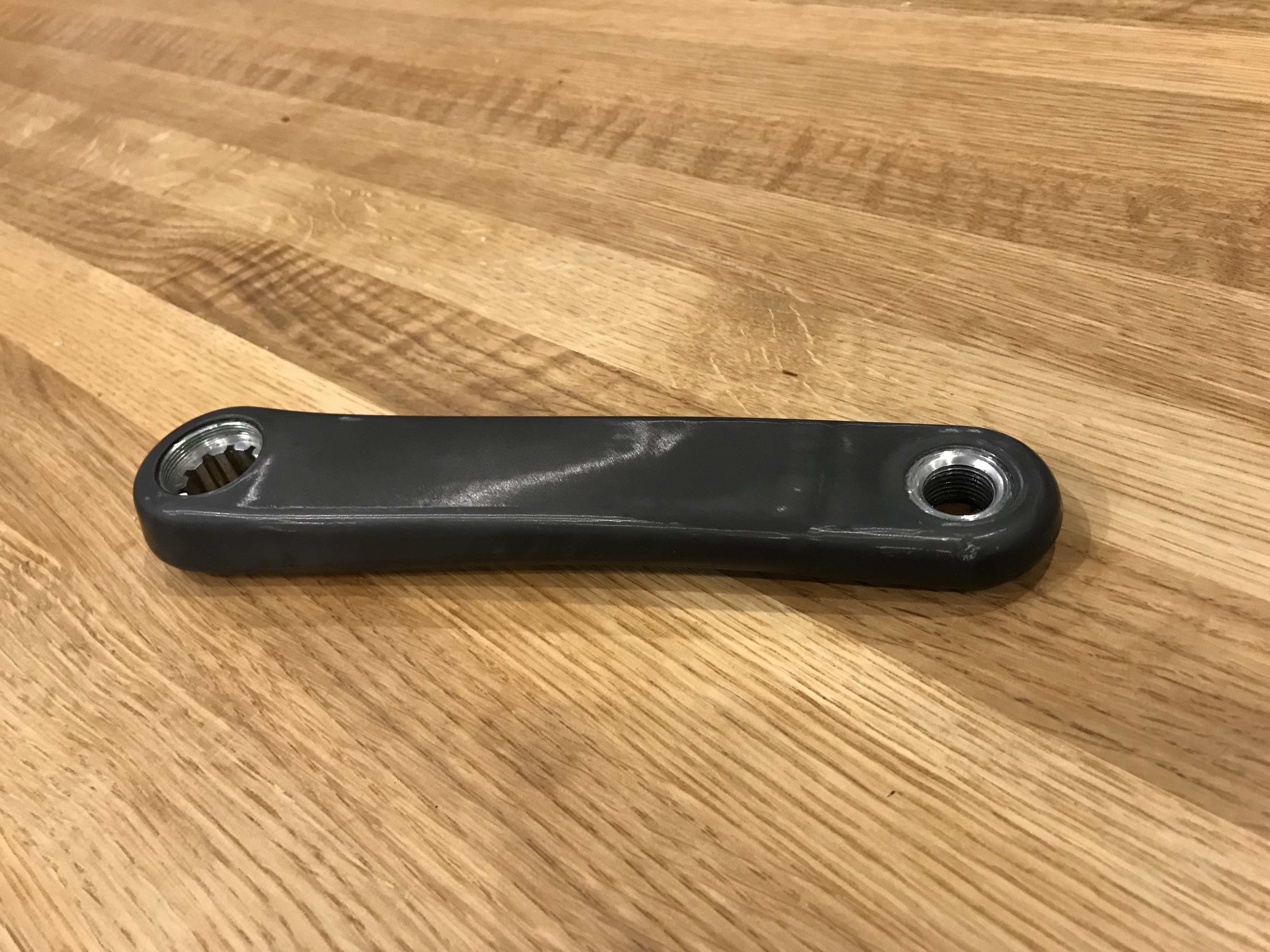 Spider/rh crank fully sanded with rings fitted. I've left the single SRAM logo for now but I may end up having to remove this. The downside of it being there is a small layer of clear coat remains so the finish is a bit uneven around the logo. Will see what I think later on, but I did like the idea of leaving just one small logo on there. 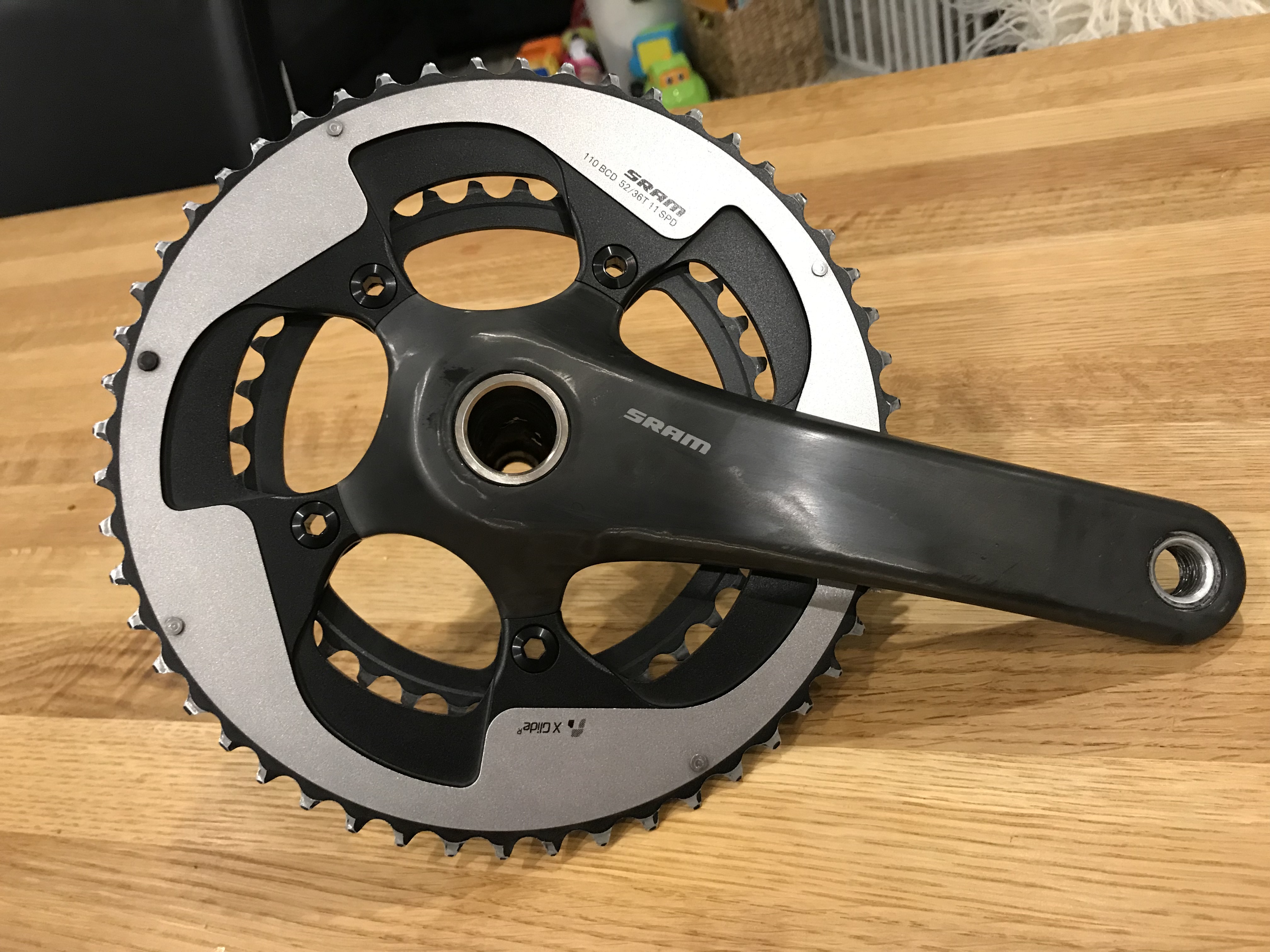 Ultimately I want to replace the SRAM rings as well with something lighter, probably the TA Syrius rings. Still, as-is the full crankset (with bolts) is about 590g. I haven't checked yet but I thinking sanding back all the clearcoat i've saved roughly 2-3g off of that so maybe 587-588 now

I think I've sanded back 6 Sram Red cranks now. Easiest to start with a blade (razor paint scraper) and then finish with sand paper.

And you're right - will be lighter and look better with after market rings (TA, Cannondale Mk5 or Praxxis) but in the meantime you could give the Sram rings a light spray of black from a cheap automotive spray can so that the rings match your nicely sanded cranks.

I needed a break from some work today and one thing i've been worried about is if I made the right wheel choice or not.

Basically I managed to pickup an old set of Dura-Ace 7850 C24 wheels pretty affordably. Over my budget for wheels but I got excited and I think they were still a pretty good deal. Reading some old threads in these forums they seem to come pretty highly regarded.

Anyway, I've been worried about the overall look of the rims i.e. are they deep enough, not sure about the red spoke nipples and also not 100% sure about the whole Tubular thing because i've never ridden them before. As I had some time today I decided to just whack them on the frame and see how they looked with a few photos.

Safe to say i'm pretty happy actually! The tyres are temporary, they came for free with the wheels but I will be replacing with some Veloflex. Skewers are also temporary as I don't have any for this bike yet, they're just off my other bike. No cassette, chain, cables etc... fitted yet.

What do you guys think about the wheels? 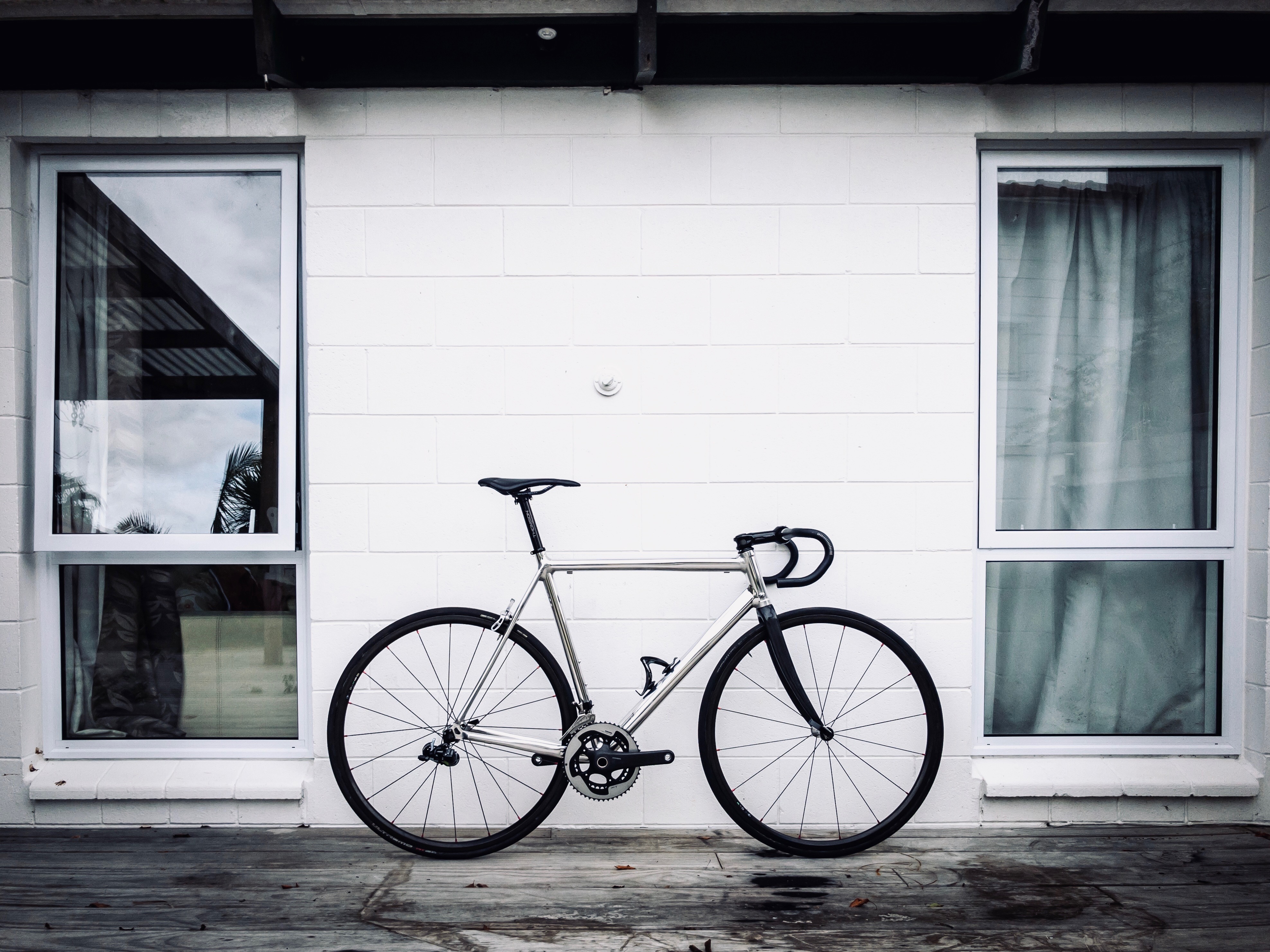 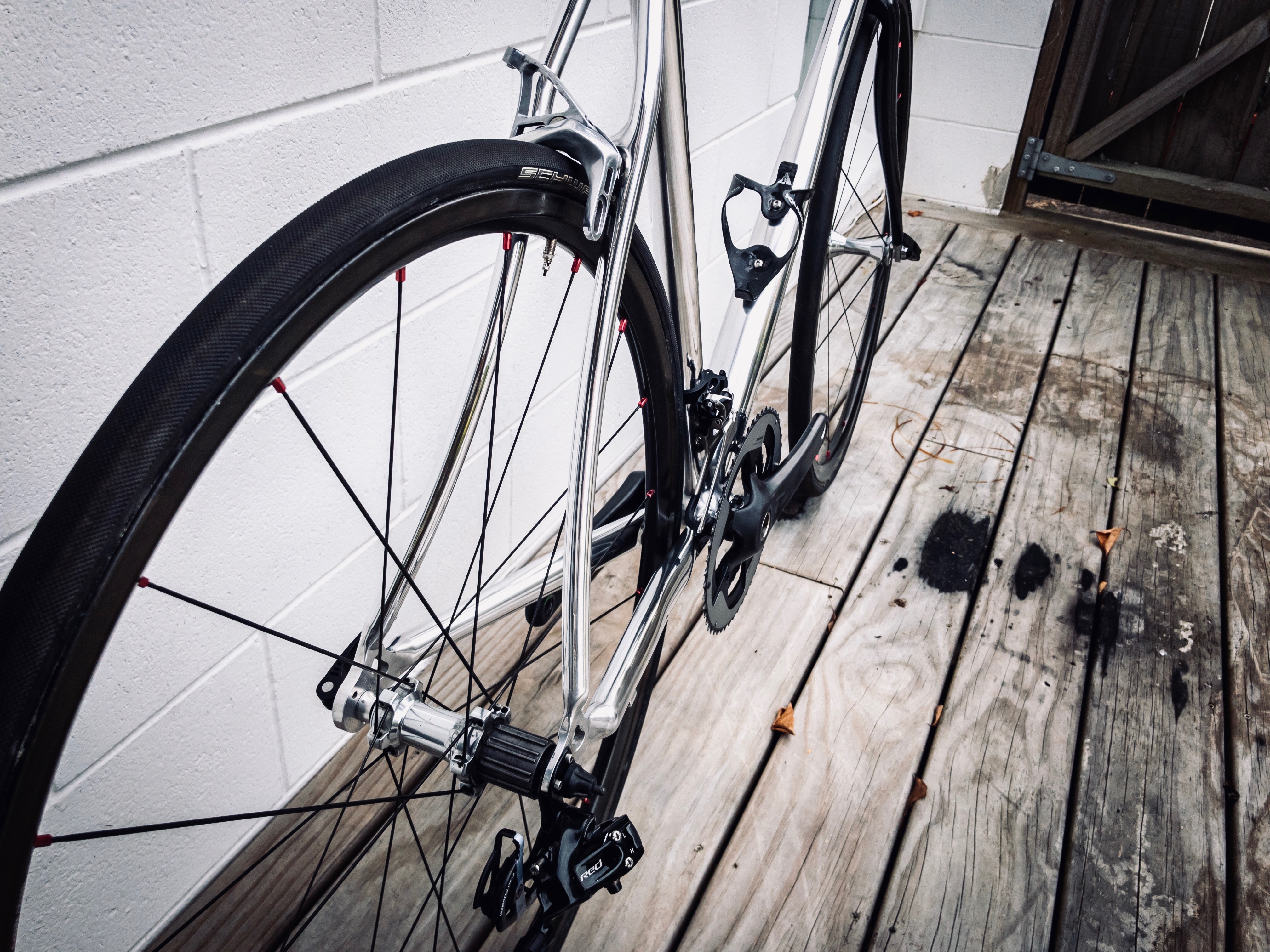 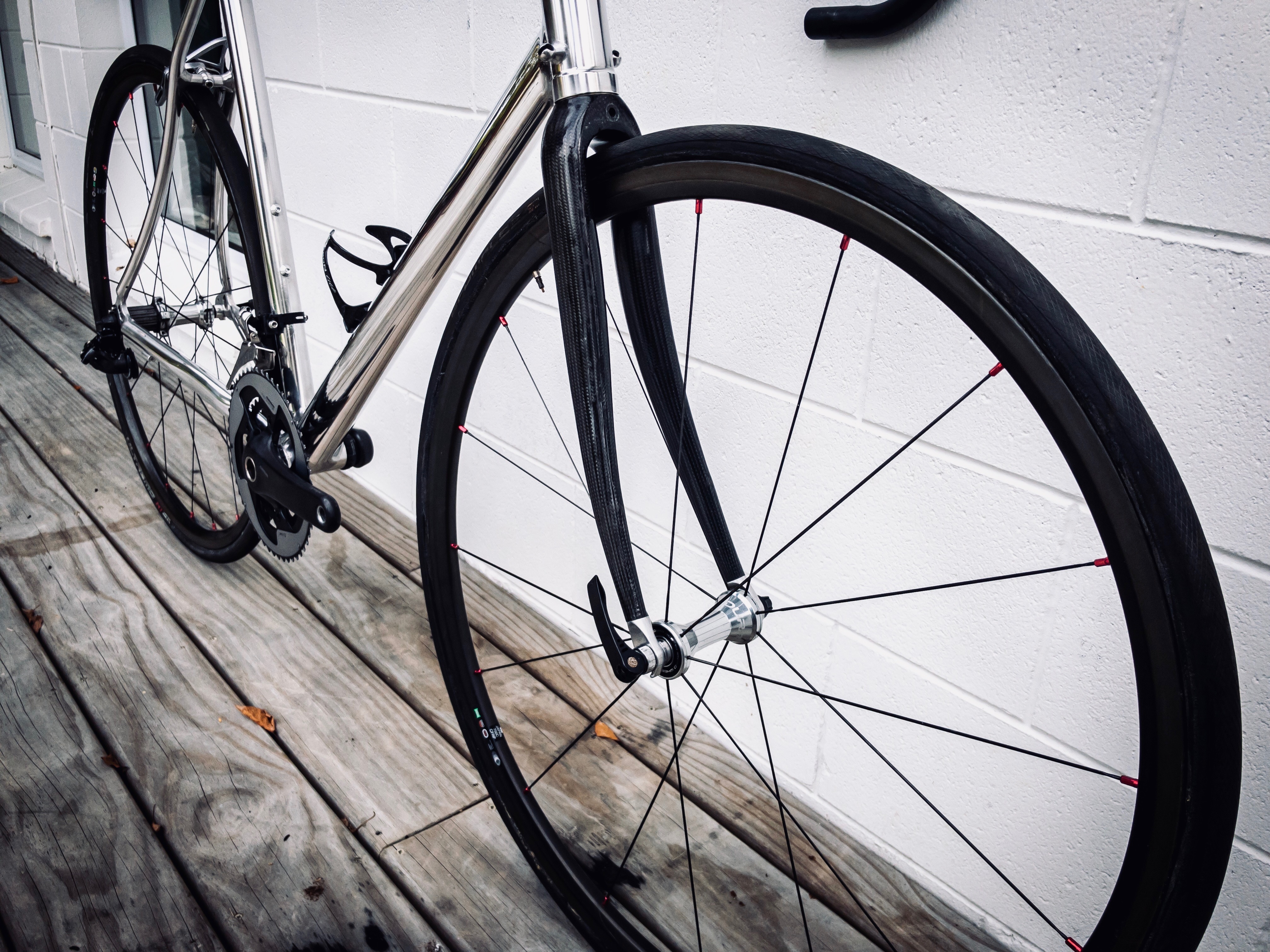 Also I weighed it like this - 5.5kg. I'm missing about 1.2Kg of stuff (Chain, Cassette, Shifters, Pedals, Cables, Bar Tape, 1 brake Caliper) but i'm about 100g over on tyres and skewers, so looking good currently for around 6.6-6.7Kg.
Top

This wheelset looks awesome, it has the right rim height for your frame.
About tubulars I can say Veloflex are good but Continental (Competition, their best model) are better, then managing tubulars is pretty easy because their punctures can be fixed with latex always running inside them, and with some attack flexgel + little pieces of american tape you will go to put on the tread in the point of puncture, it takes like 3 minutes to fix it.
My 4,93 kg Supersix Evo HM: viewtopic.php?f=10&t=137647&start=30

Fantastic polish, photos and build in progress - great stuff.
What product did you use to polish the frame and how do you get on with preventing the frame from oxidising?
Did you use Autosol or something similar

I can't wait to see your final build.
Top