I picked up this Klein Quantum II a few weeks ago. It started its life with me as a very poorly setup bike with a layer of dust and dog hair on it. I took a gamble on it as I needed a bike to commute on and thought it might be cool and the price was acceptable, even if it only turned out to be in reasonable condition.

One quick wipe after getting it home, plus a tweak of the saddle height and it looked like this: 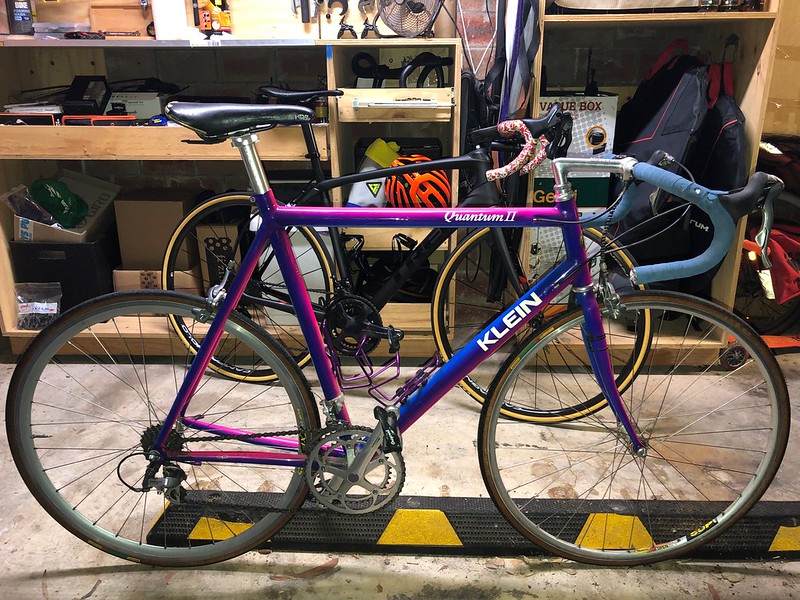 Looked ok, but was still a bit dusty and in need of a spot of TLC in places.

New boots (Veloflex Master 25c), removal of some unnecessary bits & bobs and changing the original cork tape (yes, the stuff it originally came with out of the shop!), plus a spot of extra cleaning resulted in this: 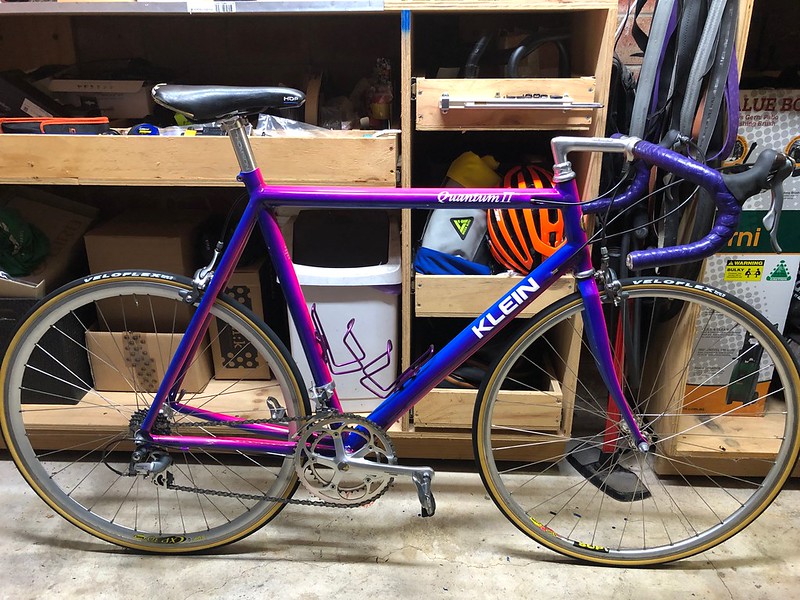 Getting there, but on a frame that was already at least one size too big for me, that 140mm stem had to go. I switched it out for a 100mm Deda (which was all I could get my hands on quickly) and rode it a few times. For old aluminium, it's a damn smooth bike; and it rolls *so* sweetly.

By this time I had also realised that the Shimano 600 Tricolor kit on it is all *totally* original and *totally* immaculate; as is the rest of the bike (bar two or three scratches, none of which are serious). It's basically a collectors item, for those who are into collecting classic bikes. Even the apparently 'mismatched' rims have turned out to be a conscious decision to run a deeper rim on the rear.

I've contemplated selling it because I wasn't happy using as the commuter it was originally supposed to be given that it is basically totally original, but having ridden it I'm now really reluctant to give it up - and it turns out the secure bike parking at work really is quite safe, which makes me much more comfortbale with that prospect.

I changed the levers yesterday to modern 'Claris' 8-speed levers in an attempt to tidy up the bars (the 600 levers are immaculate and I kind of want to preserve them for some reason; but they're also hideously uncomfortable and the cable coming out of the side of the lever drives me bonkers), so it now looks like this:

Next up is a different stem (that Deda is butt-ugly!), a set of Cinelli Giro d'Italia bars (which have a shorter reach than the Criteriums), a new saddle (a blue Rolls re-issue is the current firm favourite) and a new seatpost (due to trying to keep it vaguely 'period correct', the only 31.6mm option that gets close is a PMP Ti) - the latter of which is mainly because the older style saddles seem to need layback posts to get the saddle where I need it to be.

I've got it advertised for sale locally because it's really too big, but I'm going to struggle to actually let it go because it makes me smile so much!
Instagrammary
Current Weapon of Choice
My bikes over the years...
Top

Still a fabuolous frame. Find some 10 speed stuff cheap and some lighter wheels and you should have a 15 pounder.
Top

I would suggest you to keep the original parts. You have a collector's item in your hands as you say.
You can replace everything with modern parts, it will still look fabulous. Just don't throw away the original parts.
My 6284gr TIME Alpe d'Huez
My 10012gr COLNAGO Master X-light
Top

Agree w/ upside - you can get a mishmash of 6700 & 7900 bits pretty cheap at this point but they'll sit well on that frame. Toss in a pair of nice hoops and you'll have a beautiful monster.
Firefly Ti Road
Top

The 600 kit is just fine. Mismash on this bike does not work. What size is it? Shipping bikes is straightforward. You can bike boxes in the u.k online for £15. A frame box is cheaper. That purple frame is gorgeous and I like it alot if it a 59cm.
www.thecycleclinic.co.uk
Top

It is a 59cm...
Instagrammary
Current Weapon of Choice
My bikes over the years...
Top

That's my size. Let me know if you want to sell it.
www.thecycleclinic.co.uk
Top

It was originally for sale after I'd cleaned it up, but I rode it a couple of times and made it fit me better and now I really like it.

I would let it go, but it wouldn't be cheap (like £1350 + shipping); partly because it's such a good example, but also because I'd need that kind of money for it to justify letting it go now.

Here's a pic from yesterday's ride:

I saw you a few days ago at the lights at parriwi before I saw this thread. It really looks great in the flesh.

My thought at the time (apart from the wheels of course) was that a 7800 groupset would be perfect for it, was the 600 original do you know. I’m sure of the date of the frame but it looks later than 600

I want to update the wheels a bit so it's interesting you mention that. I'll need to source a set of relevant hubs (I missed out on some Dura-Ace 7400 hubs this week) and I need to decide whether to go with 30mm silver alu or try and find a set of black Reflex Ceramic rims or similar (I used to have 2 sets so I'm kicking myself for selling those!), but the current wheels seem solid so there's no rush.
Instagrammary
Current Weapon of Choice
My bikes over the years...
Top

I need to convince old mate in Bike Addiction to part with his 25th Anniversary 7700 set...
Instagrammary
Current Weapon of Choice
My bikes over the years...
Top

The inevitable "I wonder what this colour tape and saddle will look like?" switcheroo occurred last night:

Now to find an original Flite saddle in white (damn idiot for selling the NOS one I had before!); and a nicer seatpost...

It's also currently wearing a set of interim wheels whilst the original 600 hubs are being rebuilt into a set of 30mm silver Tubeless Kinlin rims to minimise puncture risk on the commute. This gave me a chance to check tyre clearance - those are 28c Compass Chinook Pass, which fit easily with room to spare.

On wide rims with wide tyres, this thing is gonna ride *so* nicely!

Would it be wrong to put my 12spd Campag kit on it?...
Instagrammary
Current Weapon of Choice
My bikes over the years...
Top
Post Reply
23 posts