So the wheels came in. The front weighs 474.6g and the rear weighs 580.7g, for a total weight of 1055.3g. I'm not at all surprised that they came in over my initial projected weight of 1002.5g, which results in them being 52.8g over my initial estimate. My buddy and I had two sets of these wheels built up together, so I'm not sure which rims I got and which he got, but even assuming I got the two heaviest rims, that would only account for 17.8g of the extra weight. So at least 35g of the extra weight came from the hubs, nipples and spokes. Since I didn't have those components weighed before the wheels were built, I don't know where my estimate was off, but I was assuming 177g for the hubs, 158.8g for the 44 spokes and 16.7g for 44 nipples.

With that, the wheels look great and I'm excited to ride them. But it turns out the new SystemSix may not be arriving for a looooong time after all, so this SuperSix remains my main road bike. I wasn't planning on putting a lot of miles on this WW build but am going to be forced to put on more than I had expected. So I'm in no rush to get these wheels on the bike - they are after all meant for race/special events and I just don't have any of those on the near horizon. I'll likely remove the Darimo seatpost, since I would like to limit the miles on that. And the Dila saddle will likely wait a while as well. Bummer to put the build on hold, but it makes the most sense given my wait for the SystemSix 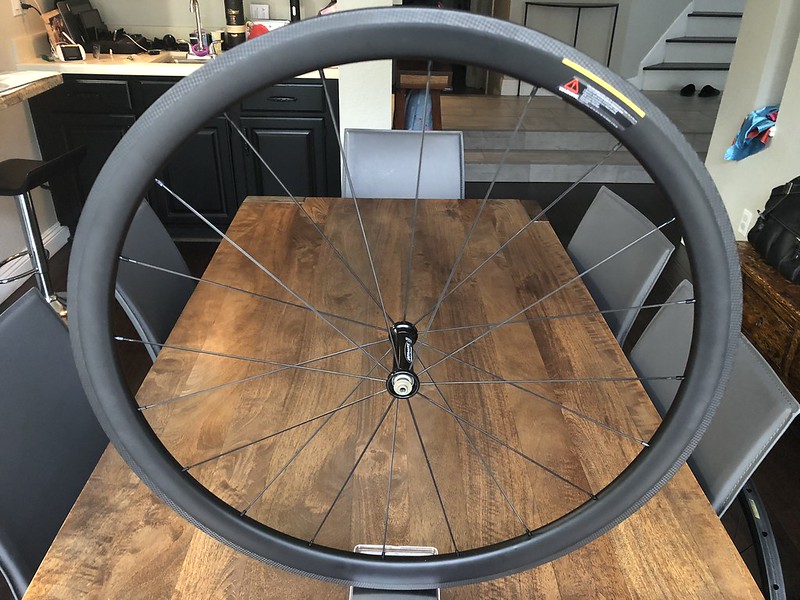 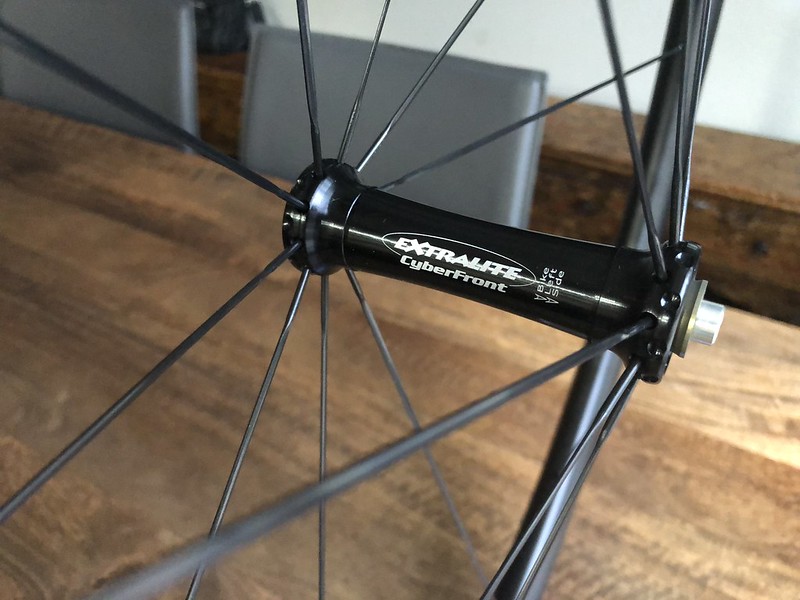 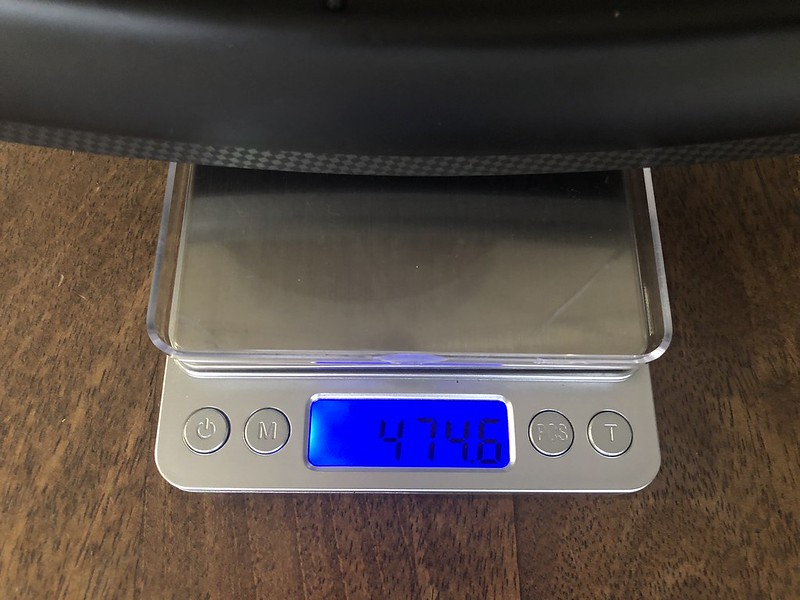 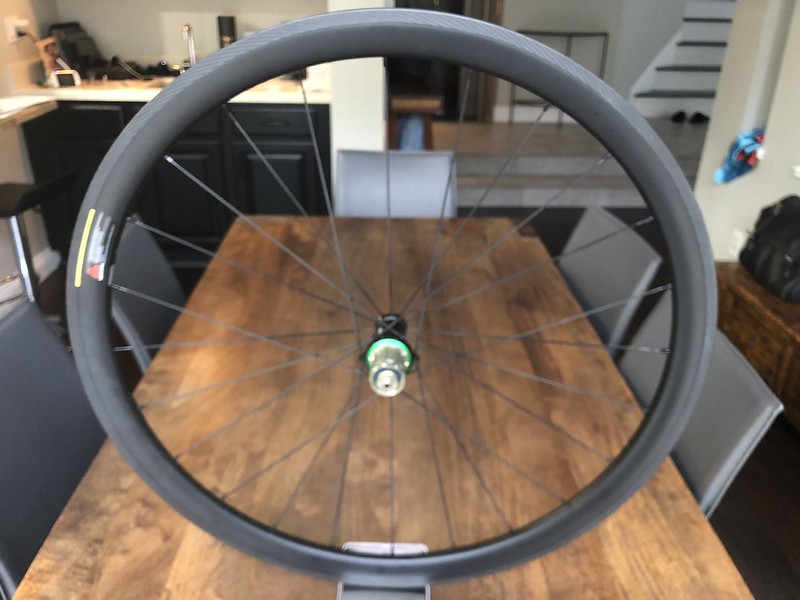 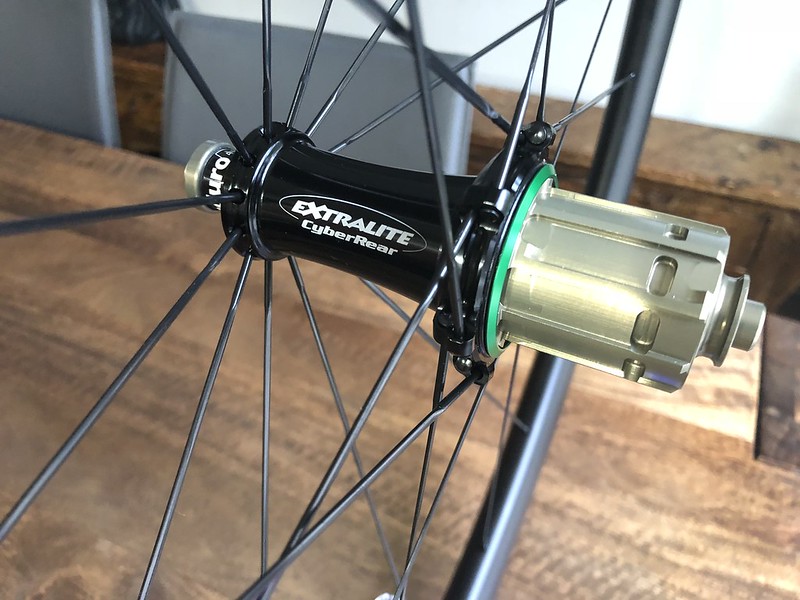 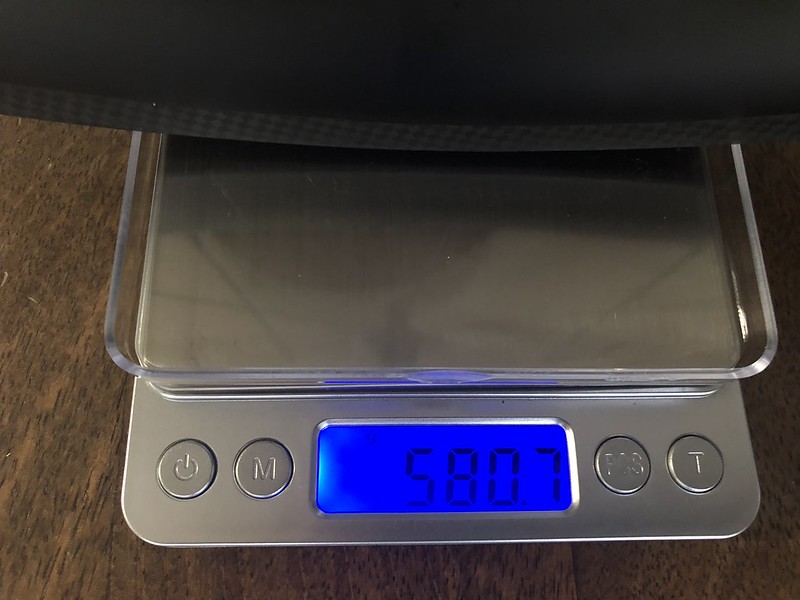 The good news is that there are fewer and fewer unknowns, so there should be less uncertainty in the final actual weight vs the projection. The uncertain measures are those in red italics - some I will never know, like the weight of sealant when I initially weighed my bike at 6.93kg, but at least when it comes to the wheels, I can weigh my Aeolus wheels the next time I change tires. 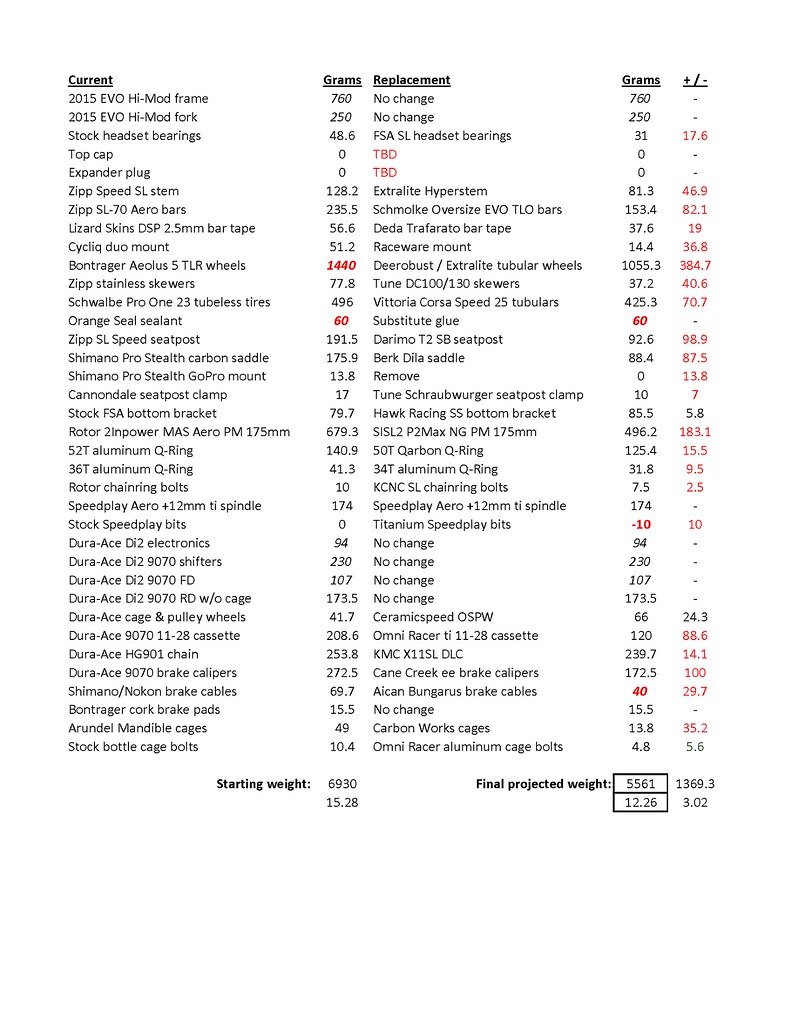 So I got the tubulars glued up and put them on the bike. The bike came in well under what the spreadsheet projected. While this was not entirely unexpected and I was hoping this would be the case, it was nice to see my hopes confirmed.

Since I had weighed the new wheels in advance, there was no surprise there. Instead, as noted in the spreadsheet below, I had made some assumptions on my Aeolus 5 wheels - their weight, the weight of sealant in the tires... as well as the weight of dried Mastik One, etc.

It turns out that I had under-calculated the weight loss from the wheel swap by 106.5g. I was pretty sure the actual weight of my Aeolus wheels would be over the 1440g claimed by Bontrager, and I made some conservative assumptions on the weight of tubeless sealant equaling the weight of dried Mastik One. I still have not properly weighed the Aeolus wheels (I'm waiting until it's time to swap tires on them), but with the new tubular wheels the bike now weighs 5.47kg (12.06lbs), and that's with the Shimano Pro Stealth saddle still on. Once I put the Berk Dila saddle on, I will lose another 87.5g, so the final weight with just the final saddle swap will be 5.38kg (11.87lbs).

I'm very pleased that the bike will come in under 12 pounds. There are some potential areas of further weight loss, but nothing significant: Speedplay bowties and bolts, wedge and top cap - maybe something I am forgetting. At this point, I may just leave those alone. The last real question is how I will get along with the Dila saddle. Still have not ridden it. I'm waiting until the SystemSix gets here to do that - for now, this EVO (with the Aeolus wheels) is my everyday "workhorse" bike. 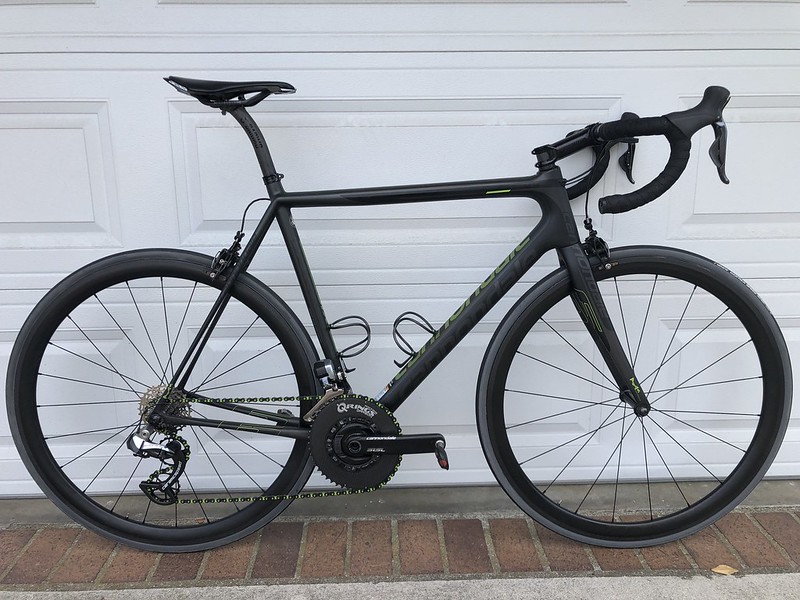 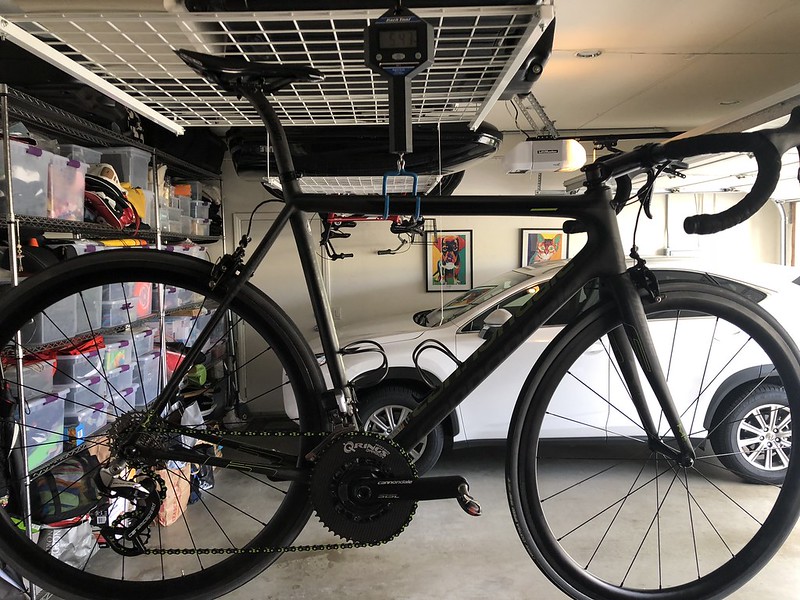 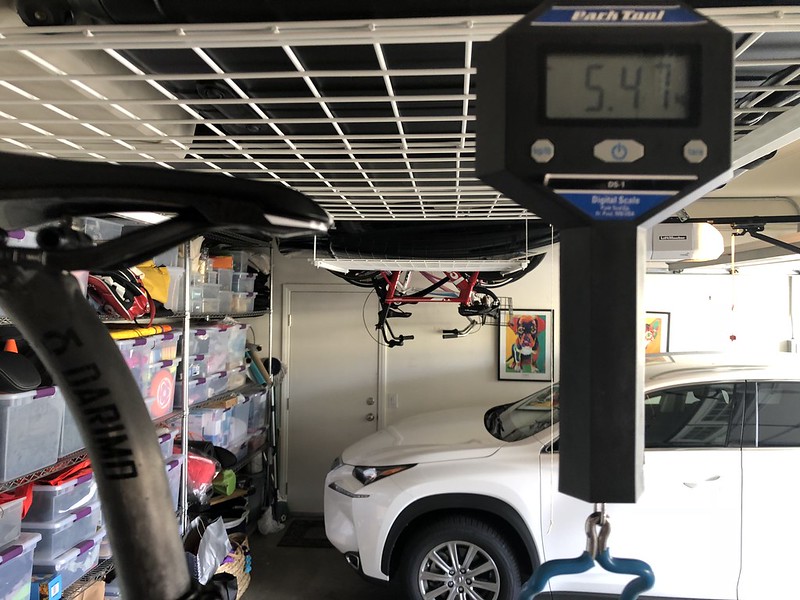 So I think I'm all done with this one. Installed the Dila saddle - I seem to get along with it well enough so will keep it. Also decided to swap the P2Max NG spider for an SRM since that saves a few grams. Final build came in at 5.37kg. 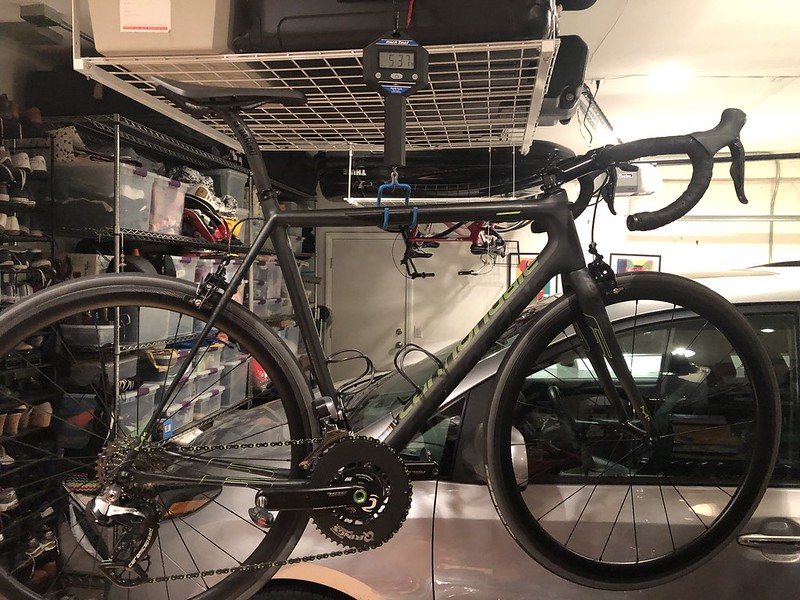 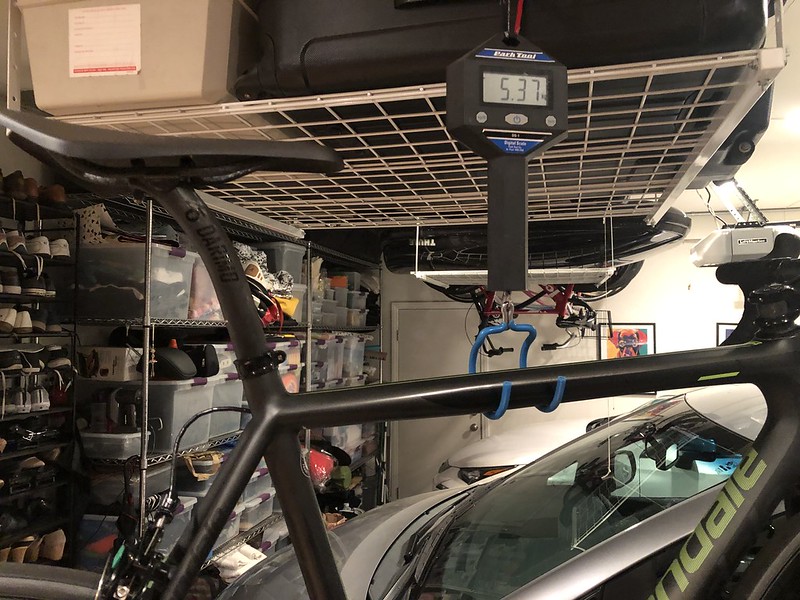 Wow, never imagine that black & green combinationg could be such awesome!
Top

I swapped out the SISL crank bolt to green and it matches perfectly! 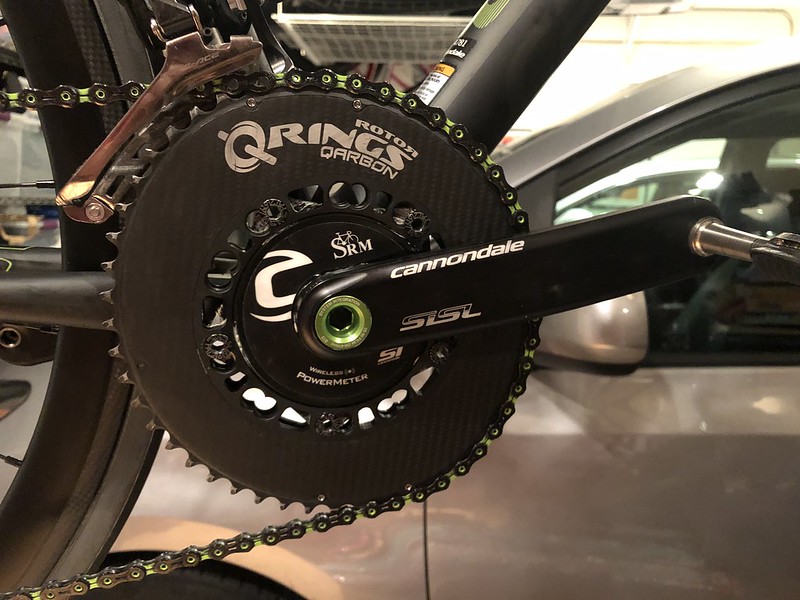 Refthimos can you give more details about your experience with the Berk Dila? Is that the 160 or 140? I too ride a PRO Stealth saddle and have a Dila 140 on order. Seeing how much the Dila slopes down from side to side has me worried now. Do you get more pressure up the middle? Thank you in advance.
Top

Very nice and true weightweenie's bike.
Nevertheless one big question fo rme, why building such a light bike and opting for the carbon q ring.
I have both the carbon and the 'open' alloy. Carbon might look cool but they are heavier and I do not believe mortals like we can feel any difference in stifness.
Top

Killer build. I'd be curious your thoughts on the Dila so far
Top

I find I can swap back and forth between the Stealth and the Dila with no issues. Because of the sloped sides of the Dila, I assume my sit bones are contacting the saddle on the "downslope" of the saddle and so I increased the BB to saddle top measurement on this bike a few mm and fit seems right - I would need to see my fitter and have him measure knee angles to be sure, but no issues.
EVO1 | 5.37kg
EVO3 | 6.51kg
SystemSix | 8.01kg
P5 | 9070 Di2 | SISL2 SRM | Enve 7.8/FFWD Falcon | Roval 321
T1 | P2Max Type S | Rolf Prima FX58/Zipp Super 9 Disc
Top