7.5kg w/0 pedals .. that yellow is in your face aint it. The blue is stunning
Top

@spdntrxi It's 7.5kg with pedals and cages, as shown below: 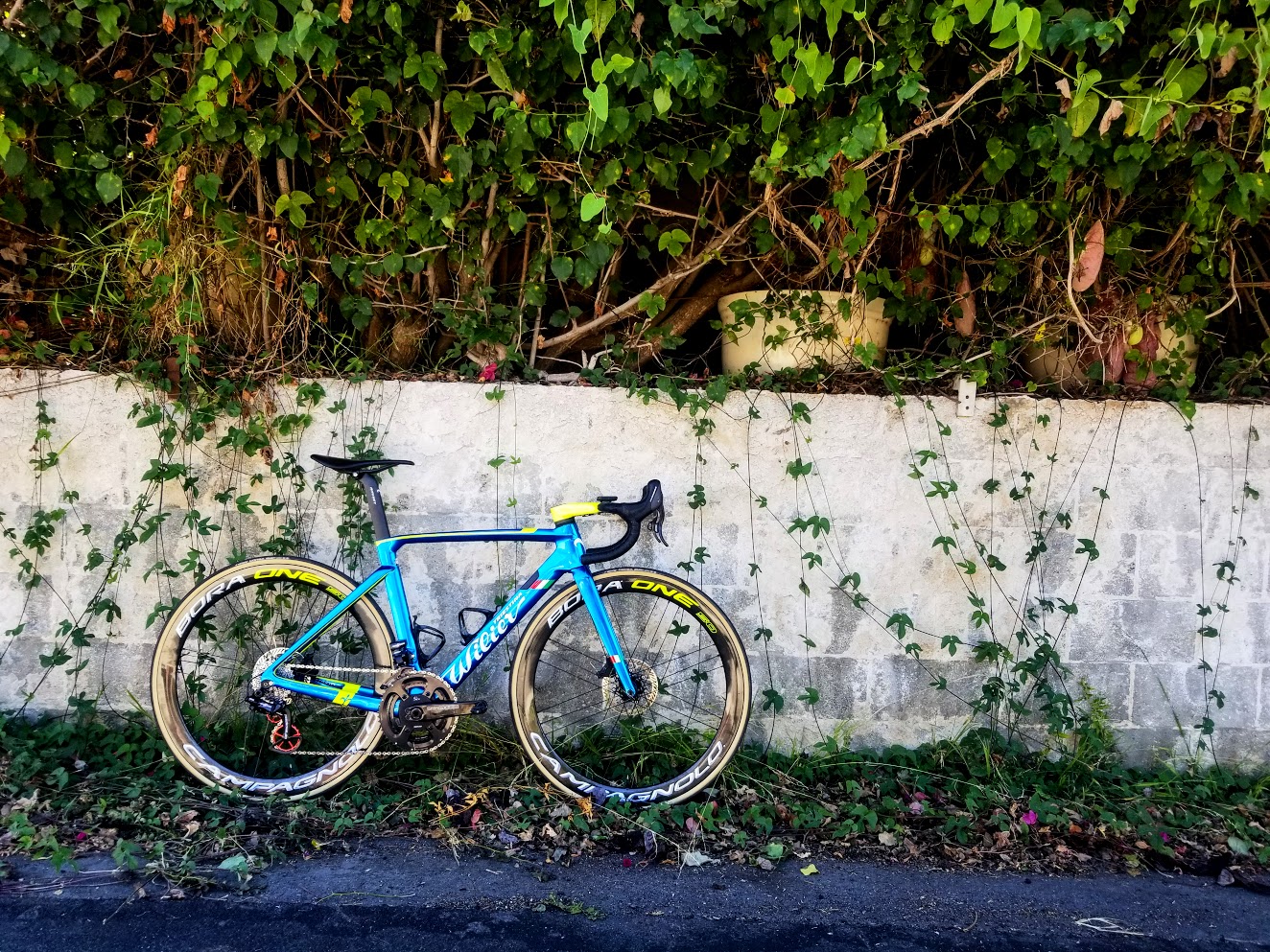 I bought this complete so as glepore mentioned, stay tuned

I did a quick shakeout ride today. There's not too many bikes that I've been on (ever) that immediately impressed me but this bike did. First and foremost, the H11 disc brakes are amazingly good. I've been on 3 different 9170 bikes and a Force Hydro bike and all were met with a "mmmm, good but not earth shattering." Well, except the Force, I felt that was worse than the Enve 3.4 NBT that I rode over on. The H11 however ramped up the power incredibly quickly through the lever throw. I was on alloy yesterday so my braking expectations were already high and rolling out of my street and down my hill I immediately felt these are something else. When I was on the 9170 bikes, it wasn't until I started riding through Hollywood Hills that they began to show their stripes. H11 was immediately apparent. I'm not sure which setting the brakes are on, but I'm guessing it's the more aggressive leverage ratio.

The other things that immediately stuck out was how smooth the ride was. The bike disappeared under me while riding through Griffith Park, which includes some unmaintained roads. I would be hard pressed to tell the difference between this and my Litespeed, which is saying a lot since the Corsa tires are less supple IMO than Veloflex. Handling seemed neutral. The bike felt fast descending. I'm not convinced that is necessarily a good thing since I didn't get an PRs descending, but we'll see (there was also movie traffic).

Lastly, EPS seems nice, just like Di2 but with Campy ergos. The large hump for H11 is nice to hold while hunched down on the hoods. I did get a few random brake rub noises that came and went. Not sure why as it wasn't preceded by any sort of braking and I couldn't induce it by being out of the saddle alone.

Last last thing, I can't reconcile the complete weight with my build sheet. Build sheet is saying 7.0kg and scale is saying 7.5kg. Need to break it down and begin weighing parts.
Strava
Not for the sensitive types. My Instagram reviews
The Ex's: I've lost track...
Top

That blue is again... stunning.

I'm getting set to order a BMC TMR01.. boring stealth module because I feel the complete bikes are over priced.. considering I dont really want DT Swiss wheels.
Top

Very lovely bike. 7.5kg ready to ride for a disc bike with deep section wheels... that's just the weight those bikes are, for now. Don't dwell on it, ride the bike.
Top

Oh my goodness now I want one. Wilier and Campa... and blue... and yellow... and Bora... but yes, a bit surprised at the weight. No doubt that this build will soon be on a diet!
Road bike: Cervelo R3, Campagnolo Chorus/Record mix...
Supercommuter: Jamis Renegade...
Oldie but goodie: De Rosa Professional Slx, Campagnolo C-Record...
And you can call me Macktastik Honey Pete Kicks, thank you.
Top

The integration will make it a challenge. Unique post and clamp. Those pretty bars with nice integration but heavy. Brakes are what they are. Leaves you with saddle, crank, cages, cassette (sram red works ok for me with SR11), headset and plug, bolts. I'm thinking 6.5 or so until Ryan finds the rims he's looking for.
Cysco Ti custom Campy SR mechanical (6.9);Berk custom (5.6); Serotta Ottrott(6.

Ha, 6.5kg is wishful thinking. If I want to keep it aero, sub 7kg is going to be a challenge. A set of Schmolke TLO30s with Extralite Hubs and Ashima Rotors could drop it down to the sub 6.8kg range. Maybe less if I went with a less sensible tire choice. The challenge with this frame is the small bits and pieces. I'll write that up later but they add up in a significant way.

Anyone know which Carbon-Ti or Extralite Thru-Axle I need for this frame?
Strava
Not for the sensitive types. My Instagram reviews
The Ex's: I've lost track...
Top

Are those tubs or clinchers on at the moment? I can't tell from the picture, but surely a few hundred grams at least could be dropped pretty easily if they're clinchers by going to tubs.

RyanH wrote: ↑
Tue Jul 24, 2018 10:14 pm
Ha, 6.5kg is wishful thinking. If I want to keep it aero, sub 7kg is going to be a challenge. A set of Schmolke TLO30s with Extralite Hubs and Ashima Rotors could drop it down to the sub 6.8kg range. Maybe less if I went with a less sensible tire choice. The challenge with this frame is the small bits and pieces. I'll write that up later but they add up in a significant way.

Yeah, I know...BTDT. Like, what do you do about the seatpost clamp? At some point there will be a very light aero integrated bar, but not now. Its an interesting experience though. I thought my Uno was a mistake, but the truth is that its as fast as my light bikes just about everywhere. A little slower uphill, perhaps, but you make it up downhill.
Cysco Ti custom Campy SR mechanical (6.9);Berk custom (5.6); Serotta Ottrott(6.

Oh no... I had assumed they were clincher :eek

Isn't a lot of the value in the H11 down to the rotors though? Aren't they a pick part of why H11 is supposedly the quietest disc braking? If so, I would not suppose that's worth changing for the sake of weight...
Current:
Acid Mint Tarmac
Hakk MX

Actually, the H11 rotors are hands down the quietest that I've used. A big gripe about 9170 for me was that normal braking made an audible noise, almost like grinding but a little more annoying. These are dead silent except for a very slight, low pitch whir on hard braking.
Strava
Not for the sensitive types. My Instagram reviews
The Ex's: I've lost track...
Top

This is not mtb , and you would loose a big part of the benefits I think
It's up to you know
Top

I'd say 6.5 is near impossible.. Even with my size M, the frame and fork came out to just over 1450gr's.. You'll need to trash ur Alabarda as thats probably going to be the biggest savings. Mine came out to around 380, which is pretty much spot on with its advertised weight.

Can't do much with the seat post but the wedge could potentially be drilled.

My M came out to around 6.5kg's and thats the rimbrake version with LWs..