Now that it's spring I've finally actually started riding this thing, so it's out and about most days getting grubby in the Scottish lanes. Should probably still be on the winter bike really but its BB seized up and there isn't any salt on the roads any more so I thought I might as well ride the supersix. 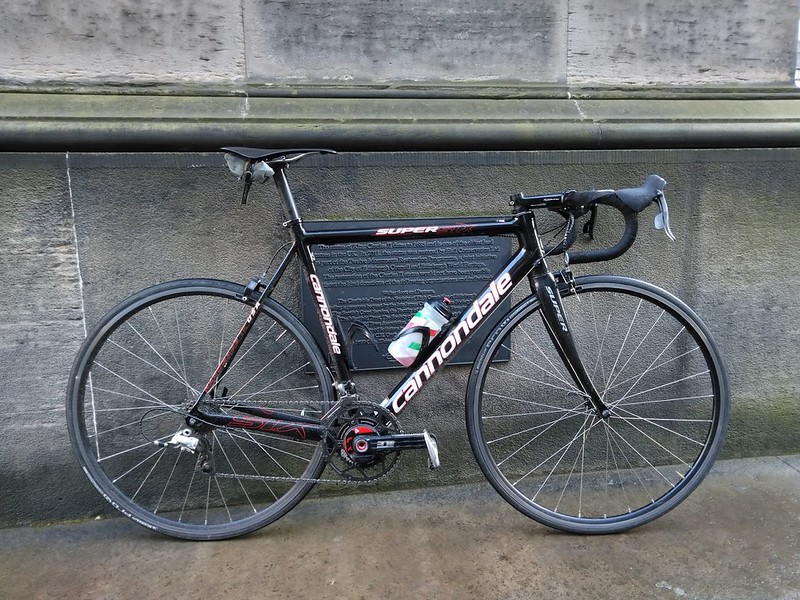 A couple of items to review:
Power2max power meter
- I am very impressed, this thing has been totally 100% reliable. From reading about power meters on the internet I was half expecting to have loads of calibration issues, consistency and accuracy problems, etc, but it's really been fit and forget. Since it has allowed me to train way better than I ever have in the past, it is well worth the relatively modest price and a 125g weight penalty.
Kinlin xr22t wheels
- After my two previous wheel builds, I was fully ready for this one to also be a flexy, out of true mess, but not so! Clearly the stiffer rim made it much easier to tension and true the wheels, and 28 spokes went from being barely enough to being plenty. I've hardly had to touch them in the last few weeks of hard riding, and they feel just as bombproof as the much heavier Open Pros I spent most of last year on. Despite the slight weight penalty (including in the tyres, since they're clinchers), thye feel just as responsive as the Ambrosio tubs, maybe it's the extra stiffness, or maybe a 60g difference in each rim isn't really that noticeable.

I think the bike is around 7.1kg in this set-up, so not the lightest it has ever been, but definitely the best performing. Last year's wheel ordeal has made me think less about weight and more about 'does it work well?'. The next thing to change will probably be the groupset as this 10 speed Sram Force/Red mixture is a bit ropey

Been a while since I've updated this thread, there have been quite a few changes. 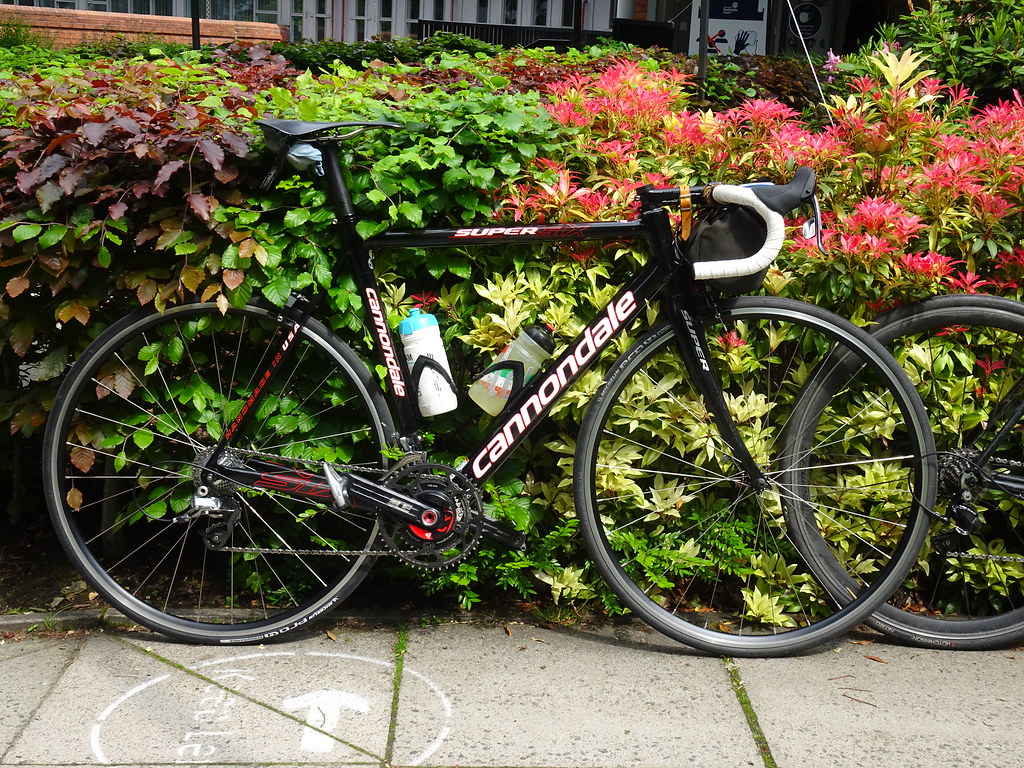 - New shifters: Sram Rival 22, beautifully reliable shifting at the price of a few grams (the old left lever broke so I had to bodge on a thumb shifter for a while, worked pretty well actually!)
- Sram Force 11-25 cassette, it was the cheapest and lightest option but to be honest I'd quite fancy an 11-28 or even 11-30 if I could squeeze it in. More for staying in the big ring longer rather than overall range.
- Rear wheel rebuilt with heavier guage spokes by an actual wheelbuilder, best £65 I've ever spent.
- white bar tape, thought it was too flashy at first but it's really grown on me.
- got a handlebar bag, so along with going 11 speed this bike seems to have made it into the 2010s

I think it's about 7.3kg at the moment, not that I really care. The only things likely to change are the saddle and pedals, but the current ones are perfectly functional.

It's summer bike time again!! The weather is nicer, it's racing soon, and the winter B'twin was getting extremely crusty..
The only upgrade is tubeless tyres, GP5000 TL, literally easier than inner tubes on these rims (Kinlin xr22t), one layer of tape and inflated with a track pump and no sealant 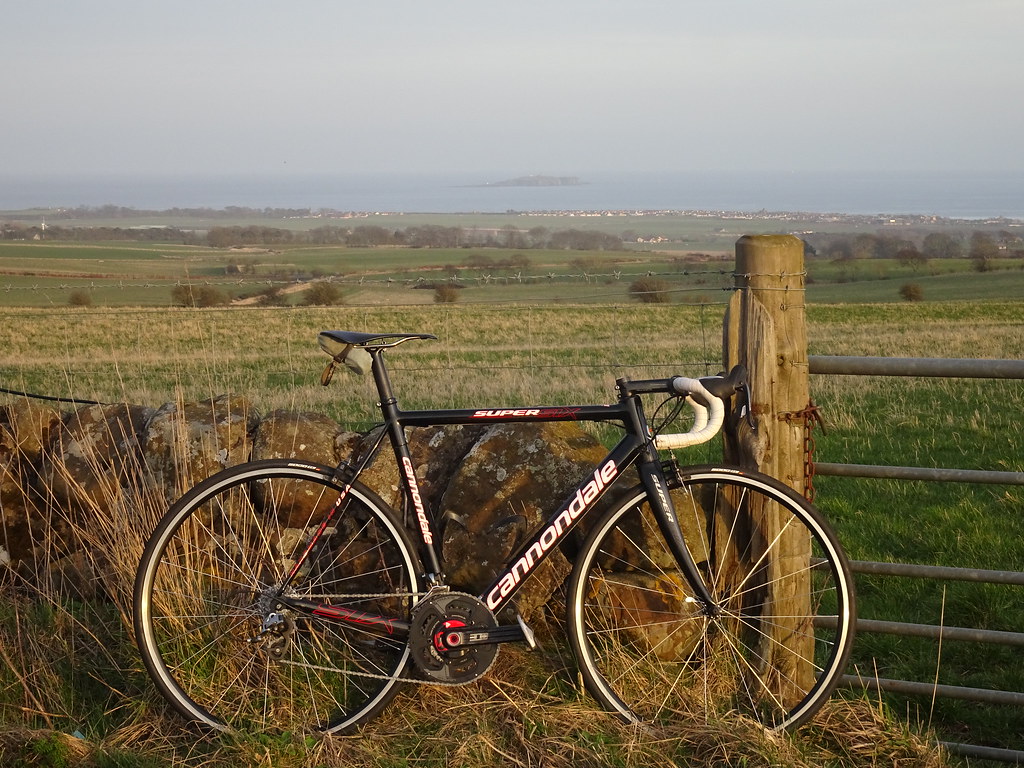 Also put on some 52/36 Praxis rings I had lying around. Haven't weighed the bike but I'd guess it's about 7.2-7.4 like this. Still haven't got lighter pedals or aero wheels, maybe one day..

very nice! a reliable bike that brings a lot of joy
Top

Awesome dude ! How are you feeling with the 52 over the 50 big ring?
Top

Thanks guys, I really love this bike

Honestly haven't noticed the 52 ring really. To avoid excessive cross-chaining I treat the 21 (3rd sprocket) as my bottom gear when in the big ring and that's fine for the rolling roads round me. It's only 0.8kph difference from 50x21 at 70 cadence, and I'm fitter than I was last spring so I guess that's the difference..

Hey dude, really enjoyed reading this build. Thought I recognised the bike from the SSS crit back in April. I may have commented on it then

How often do you ride it compared to your Btwin?
Appreciate the updates and look forward to more.
Top

How do you find the 7900 FD (assume that's what you're running?) with the sram shifters? I couldn't get my 7900 FD to play nice with the older 10spd shifters so gave up, but tempted to try again (but with the 11spd stuff) if you've got it running smooth?
I write the weightweenies blog, hope you like it

Disclosure: I'm sponsored by Velocite, but I do give my honest opinion about them (I'm endorsed to race their bikes, not say nice things about them)
Top

Still love this bike.
They have 3T rotundo (classic drop) team carbon bars on wiggle, £39.99 down from £249. Be a nice addition to this beauty. (Unless your bars are carbon already)
Top

Apv wrote: ↑
Tue Aug 02, 2022 12:52 pm
Hey dude, really enjoyed reading this build. Thought I recognised the bike from the SSS crit back in April. I may have commented on it then

How often do you ride it compared to your Btwin?
Appreciate the updates and look forward to more.

I'm kind of in my gravel era right now (see somewhere in the heavy gravel bikes thread) but this bike gets ridden a fair bit too. No build updates since the spring really, it's been a quiet summer of tinkering. The B'twin is my winter road bike and it gets thrashed every year from November to February, at some point I will have to retire it as it takes a bigger and bigger service every time lol. Perhaps I should take better care of it, but who's got time for that

@istigatrice yeah it's a 7900 FD - works just fine with my Rival shifters, as it did with my old 10s ones,. No crazy tricks to make it work, the cable pull is fine as it is. When I was first building up this bike (5 years ago jesus) I remember reading that 10s shimano FDs actually work better than sram ones with sram levers, but as I've never actually used a sram FD I can't confirm that lol

shame it's only the 44cm they've discounted that much otherwise those would be a crazy deal. Got ritchey neo-classics on still, which are really nice so unless I find a 38cm Fizik cyrano snake, these are as good as affordable traditional bend bars get.