Ever since I started reading (and posting on) WW, build threads have been my favourite part of the whole site, and now I get to do my own!

I'm but a poor high school kid so this won't be the fanciest build, and seeing as I have my current bike to ride in the mean time, this is going to be a long slow one.
After a bit longer than 24 hours of delivering, this intereseting looking package turned up courtesy of John on ebay. 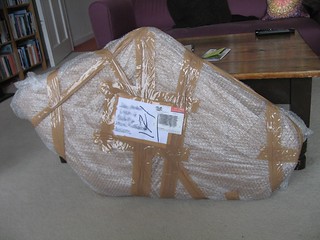 And inside... a Cannondale supersix (not evo, nor hi-mod) from 2008 in size 56. It was Cannondale's first full carbon model, although it has much in common with the carbon part of the SystemSix. 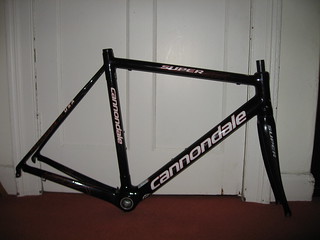 It's not light even for a ten year-old frame, but this is my first full carbon anything, so I'd rather it were nice and solid than super feathery. I'm already treating it as if it were made of glass as it is!
Frame weight with BB and headset bearings, dunno how close it is bare to the claimed 1050g (and my scale is only accurate to 2g): 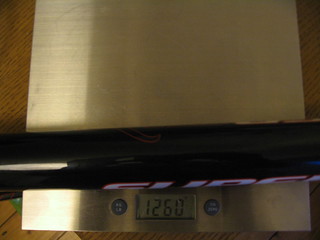 The fork is quite light though, spot on claimed weight: 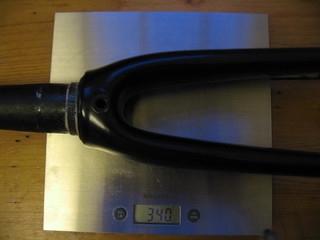 Some hardware that came with the frame.
Top cap and thrust ring thingy: 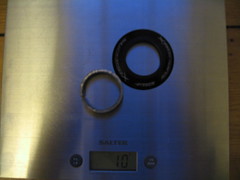 Four headset spacers weigh 10 grams, so the one I'll use is about 2.5: 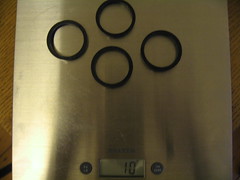 This Cannondale Si (really fsa) expander is pretty heavy, got a JRC superlight one on the spreadsheet: 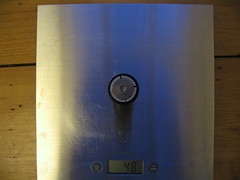 As I said, this will be a slow burner and most of the parts I have planned I either don't have yet, or are on the bike below and I don't have pics of the weights: 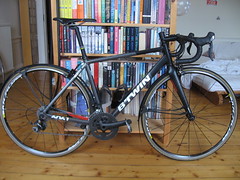 But here are a few parts that I do have pics for.
Ritchey wcs neo-classic bars: 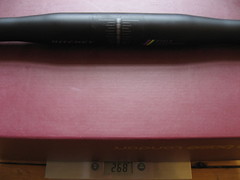 Kalloy Uno stem 100mm -7, might not use this exact one depending on fit, but it'll be this model of stem: 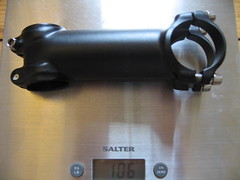 Selle Italia slr flow with vanox rails (whatever that means): 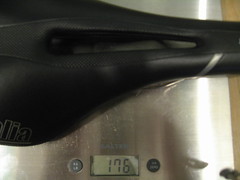 Phew! What a lot of pictures. I've got other things like wheels and tyres etc. but they're a faff to weigh all the bits individually.
I'm already on the hunt for parts, so updates to follow soon (-ish).
All comments and criticisms appreciated.
TheMidge
Last edited by themidge on Sun Mar 22, 2020 7:45 pm, edited 3 times in total.

I use the same expander, it has more points of contact and seems more robust than the Ultrastar

Here's the provisional build list. I don't have quite a few of the parts yet, so the scale weight column especially is rather sparse and both of the total weights are slightly meaningless, but I might as well show what I've got eh? 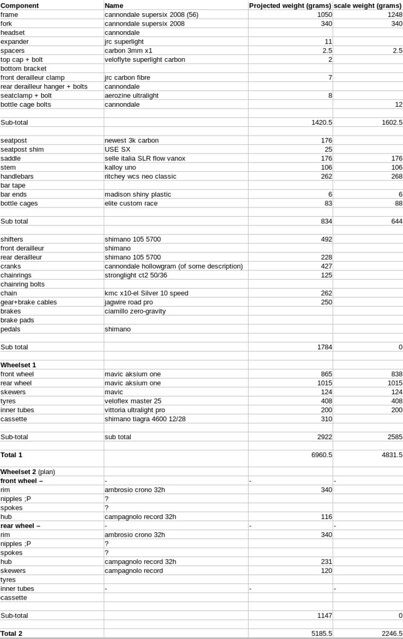 Sorry it's a bit blurry, I had to combine three screenshots.
A few clarifications:

Looking forward to seeing it finished

The main things that stand out to me for weight saving on your current spec would be the bottle cages, could be an easy 60 gram~ saving

Any queries about our expander or fd clamps please feel free to hit me up here!
Josh
Top

Yeah, these elite bottle cages are super good at holding bottles, but they are pretty weighty too. I must say I don't really know much about bottle cages, so if anyone has any light and strong recommendations that won't break the bank, I'm all ears.

themidge wrote: ↑
Sun Feb 18, 2018 12:32 pm
I must say I don't really know much about bottle cages, so if anyone has any light and strong recommendations that won't break the bank, I'm all ears.

I got my UD carbon fiber cages on ebay. 2 cages for $22 shipped to my door. I think it took 10 days from China, but they are fantastic. 15g each and have yet to loose a bottle.

Thanks Bianchi10, those look like a good bet to lighten things up a bit. I'm going to stay with my current bottle cages for now as I want to keep initial expences somewhat under control (although I did just splurge on some Ciamillos! They were too much of a bargain to pass up), the little things do start to add up. They've gone on the upgrade sheet though (below). If you can't already tell I'm enjoying being super organised with this

. Who knew spreadsheets could be so fun!

Well, I've got some brakes now. I found some Ciamillo negative G's for a pretty good price on Fleabay and jumped on them, shout out to Axel from Germany! 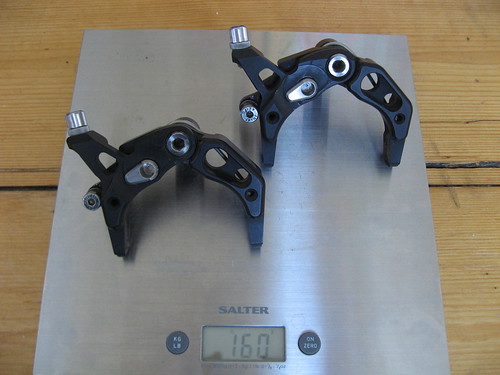 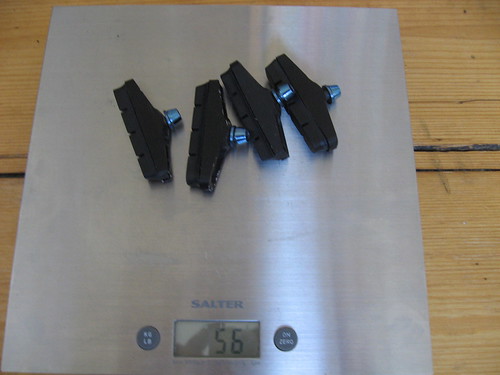 I just love the industrial yet elegant look of these calipers, enough to stem the tide of disk brakes for years to come!
They're about as light as one can get without spending £1.1K on fibulas, so they should last me forever, or until they break (hehe see what I did there). The total for the whole set is still above the 200g mark, which I'd like to pass. Perhaps the shoes and pads are letting me down, I dunno, they're still ~100g lighter than DA9100

EDIT: I forgot to weigh the calipers with the bolts as they didn't come with any, so +8g for the ones off my old b'twin brakes.

. Although I think cranks will take me a looong time to put together (if anyone has any cannondale SI or SL cranks (nothing too fancy) or associated parts they'd be willing to part with...)
My venerable Mavic aksium rear wheel's freehub gave up the ghost the other day, so I needed a new wheel and as luck would have it, a friend had an old pair of dura ace 7900 c24 clinchers in his garage

Skewers are a bit weighty: 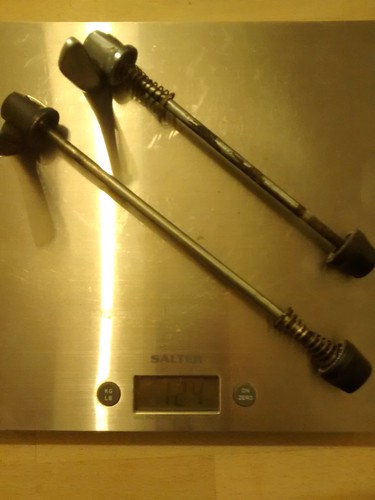 But the wheels themselves are nice and light, 1400g for the pair: 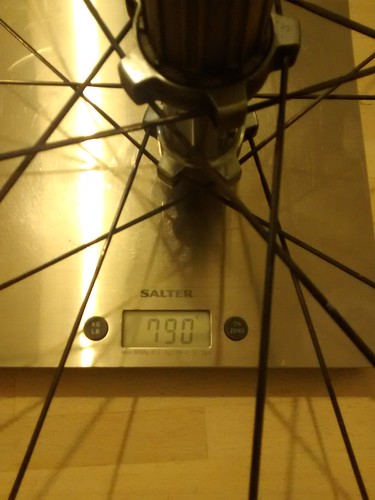 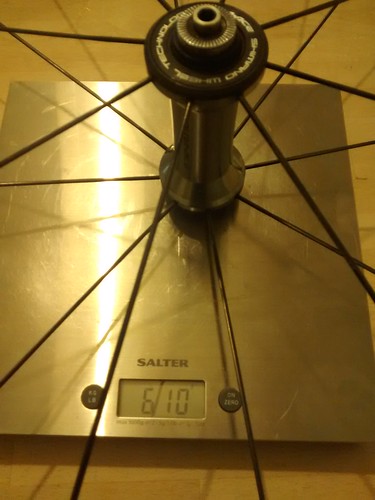 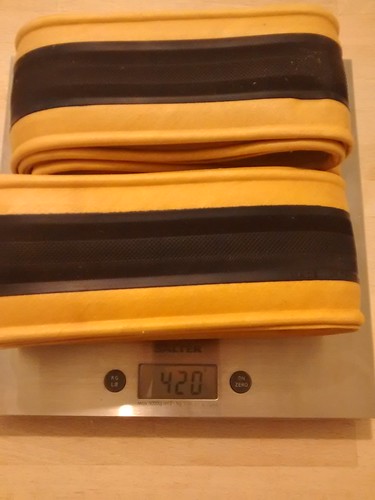 Cassette weighs 300g exactly by calculation, so I could save weight there, maybe save that expense for 11 speed. 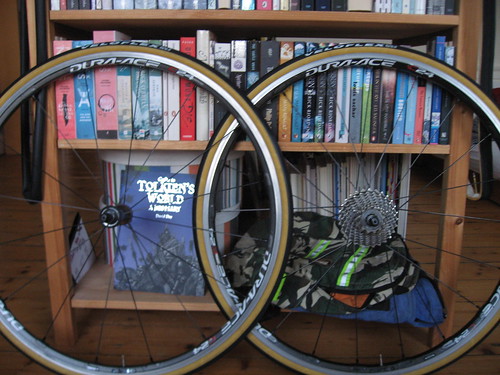 Total weight should be around 2444g, not so bad. I've saved about 450g compared to the mavics

. Although I think cranks will take me a looong time to put together (if anyone has any cannondale SI or SL cranks (nothing too fancy) or associated parts they'd be willing to part with...)


Some well priced SI cranks on ebay at the moment. Worth having a look. Really great cranks, love mine!
Cannondale Systemsix Ultegra 2020

:
Cassette weighs 300g exactly by calculation, so I could save weight there, maybe save that expense for 11 speed.
Total weight should be around 2244g, not so bad. I've saved about 650g compared to the mavics

You're right, I forgot to add the tubes! Now fixed, thanks for putting me right